Columbine. Newtown. Charleston. Parkland. These are just a few of the American cities and towns remembered as locations of the deadliest mass shootings in history. Created by Change the Ref and MullenLowe U.S., Shamecards depict the searing scenes of mass shootings that occur nationwide and all they leave in their wake: murdered school children, workers, concert-goers, religious worshippers and families and friends.

Shamecards are more than just pieces of graphic art. Anyone can visit this website and send a postcard to lawmakers to ask for action on gun reform. Because we know they don’t want their cities to be remembered for the visceral scenes depicted on Shamecards, and neither do the people who live there.

The postcards were illustrated by 30 artists from 25 countries across the world, each of whom donated their time and talent to Change the Ref.  Every Shamecard tells the story of a mass shooting through an artist’s eyes, capturing provocative, visceral scenes on the front, with a short, sobering description of each shooting on the opposite side. Sadly, due to the high volume of mass shootings in the US, there’s one for all 50 states.

Manny and Patricia Oliver, founders of Change the Ref and parents of Parkland shooting victim Joaquin Oliver, are forcing lawmakers and Americans to face our country’s inaction, which has resulted in a tragic and shameful reputation for gun violence under the influence of the NRA. Ultimately, the goal is to flood the inboxes and mailboxes of Congress so they’ll be compelled to enact change to reflect the pride and sense of duty they feel for the cities and towns they represent. And now, with a bankrupt NRA, new faces in Congress and a new administration, there’s truly an opportunity for that change.

“America is known for mass shootings that happen over and over and over again. It’s time to turn this shameful reputation to a message of bravery, vindication and common sense,”

“Shamecards were created to embolden lawmakers who wouldn’t budge on gun control to stand up to the NRA and to challenge the representatives and senators who promised us they were on our side, to keep their promise.”

In addition to the website and virtual postcards, a Shamecard mural is on display in Parkland, Florida.

“Even in the past few months, we’ve seen voters and lawmakers reconsider what they stand for and what the right thing is to do for our country, Let’s change the gun laws in America before gun violence changes us.”

About Change The Ref

Change the Ref is a nonprofit founded by Manuel and Patricia Oliver in memory of their son, Joaquin, one of the 17 people who lost their lives during the mass shooting at Marjory Stoneman Douglas High School in Parkland, Florida, on February 14, 2018. CTR Mission is to raise awareness about mass shootings through strategic urban art interventions that will reduce the influence of the NRA on the Federal level. www.changetheref.org. 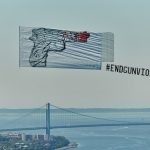 Australian CJ Hendry’s artwork, an image of a T-shirt in the shape of pistol, was flown over Orlando, Chicago and New York following Sunday’s mass shooting