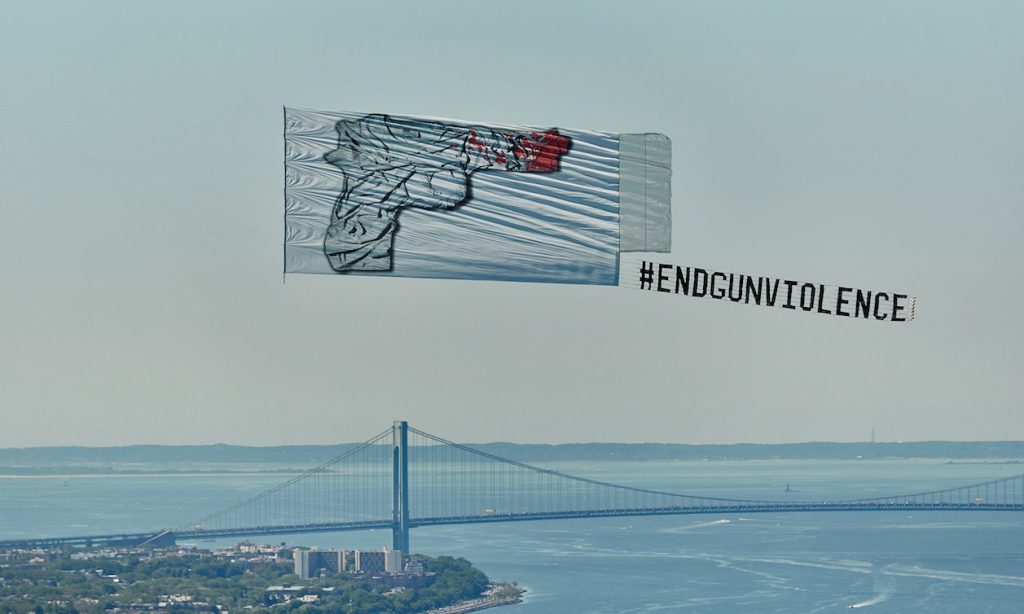 This article titled “Artist makes statement about gun violence in skies above American cities” was written by Alan Yuhas, for theguardian.com on Saturday 18th June 2016 19.58 UTC

An Australian artist flew a 3,000 sq ft piece of art over Orlando, New York and Chicago on Saturday, as part of a demonstration against gun violence in the US.

Related: How the Orlando shooting unfolded: ‘He came in with the intent of evil’

Artist CJ Hendry designed the work, a drawing of a T-shirt crumpled into the shape of a gun and bloodied at the muzzle. Trailing behind the banner was the slogan “#ENDGUNVIOLENCE”.

Alluding to a mass murder in Orlando, Florida last week that killed 49 people and wounded 53, becoming the worst shooting in American history, Hendry told the Guardian: “In light of the recent and devastating events, I wanted to create something that inspired the possibility for change. To help in some small way to end gun violence in the United States.

“In Australia, in 1996 we experienced a horrific mass shooting, the Port Arthur massacre, where 35 people lost their lives,” she added. “Our prime minister at the time, John Howard, championed a major gun reform and it worked. We’ve never had a mass shooting in 20 years.

“It is my hope that this could be a reality for the country I now call home.”

Twelve days after the Port Arthur shooting, Howard helped pass strict gun control measures including a prohibition on private sales, a 28-day waiting period with background checks and the requirement that owners register their weapons and provide a “genuine reason” for the purchase.

Since the laws passed, the government has also bought back about a million semi-automatic weapons. Australia has had no mass shootings since 1996, though they were rare before the laws were enacted.

Rates of suicide and murder per 100,000 residents declined dramatically after the laws were enacted, respectively falling 65% and 59% in the decade from 1995 to 2006. Australian gun deaths were declining before the measures, but the laws appear to have accelerated that drop, at least in suicides and to a lesser extent homicides.

Last year, Barack Obama cited Australia as an example for the US to follow. Lining itself against him and with Australian gun groups, the National Rifle Association has said the laws “robbed Australians of their right to self-defense and empowered criminals”.

In contrast to Australia, the US has regular shootings that can be classified as “mass shootings” – defined as four or more people shot in one incident – not including the shooter. According to data compiled by the Gun Violence Archive, there is on average a mass shooting five out of every six days in the US.

Related: It took one massacre: how Australia embraced gun control after Port Arthur

In 2014, the FBI counted 8,124 gun homicides. From 2009 to 2013, an average of 32,100 people died from gun-related causes each year, the majority of which were suicides. By one tally, in the US at least 125 people have been killed by guns since the shooting in Orlando last Sunday.

Hendry acknowledged the “very literal” nature of the piece, but said she hoped the flights could “inspire the possibility for change by allowing people their own interpretation”.

She added that she used a T-shirt design to universalize gun victims – “no matter race, gender, sex or culture, we all wear T-Shirts” – and designed the banner to be huge to reflect the scale of gun violence in the US.