Stine Deja’s sculptures are inspired by the practice of cryogenic freezing. They contrast soft, heavy, relatably human bodies with hard metal frameworks that surround them. Their form seems to reflect the ideology that underpins the field of cryonics. Its advocates hold a wide-eyed optimism about science’s potential to preserve life, encircled by a cold commitment to allowing material inequalities to dictate who can harness such potential.

When I visit her studio, she is preparing for Cold Sleep, her upcoming solo exhibition at Tranen in Copenhagen, Denmark. The space feels like a home, furnished with plants and photographs. We are joined by one of Deja’s Thermal Womb sculptures, whose CGI eyes silently observe our feet from ground level. Displayed on an LCD screen tucked into the hood of a gold thermal sleeping bag, they stare blankly ahead. Above them a body-shaped mass, concealed by the bag, is held upside down in an open-faced metal cylinder by three nylon straps. It protrudes around the straps and its feet slump slightly forward at head-height. You can sense its weight and fleshiness. Its soft edges and submission to the force of gravity make it feel organic and human in contrast with its manufactured, synthetic surroundings.

Wrapped up, leaning against a wall is another sculpture: Thermal Suspension. Here, a suggested body is wrapped in a sleeping bag with separate arms and legs and held by a more comprehensive network of straps in the centre of a square metal frame. Deja shows me maquettes of a similar piece she will show at the exhibition; this time, the body is suspended between large metal rings.

Thermal Womb is a reproduction of the cryogenically frozen bodies stored by a company called the Alcor Life Extension Foundation, Thermal Suspension is an imagined evolution of these structures Deja first learned of Alcor when Zoltan Istvan, leader of America’s Transhumanist Party, visited its Arizona headquarters. In 2015 he travelled around the country in a giant coffin shaped vehicle named the Immortality Bus, raising awareness of the ability of technology to overcome human death.

“We at Alcor have confidence revival may be possible,” the company’s website reads. In exchange for a fee ($200,000 for a whole body, $80,000 for just a head), they preserve their legally dead clients in a state of readiness for such a revival. When medical technology will evolve to this point is unclear. As Deja puts it, “they’re just still waiting […] Eternal waiting.” Istavan is more hopeful; he describes Alcor’s residents not as dead, but as “temporarily beyond the help of modern medicine”.

The bedrock of Alcor’s project and Istvan’s advocacy of it is hope: hope that what we understand as death might not be the end, hope that we might be able to live forever. This hope, like the characters in the sleeping bags, is soft and vulnerable. It sits adjacent to tender feelings of fear and yearning. Also like Deja’s subjects, it is surrounded by something less comfortable. Cryonics is an industry that neither Alcor nor Istivan is interested in nationalising. The ability to press pause on death is a privilege that only some will ever be able to afford.

“So many people can’t even afford to have a life whilst they are alive,” Deja explains, “but then some people are privileged enough to try for a second life.” As a private industry selling a future where death can be avoided, proponents of cryogenics are willing a world where income inequality is a matter of life and death. Just like the subject of Thermal Womb, quietly watching us as we speak, is suspended within a physically unforgiving backdrop, the hopeful outlook of Istavan and Alcor is bound up with a cold, hard commitment to a certain conception of survival of the fittest.

As I’m leaving the studio, Deja says “I think of the future as something that is happening now.” This thought is normally expressed triumphantly, as a celebration of how far society has come. Now, thinking about the winners-and losers-dynamic that inevitably accompanies Alcor’s futuristic project, it feels less jubilant.

Cold Sleep, Stine Deja’s solo exhibition at Tranen in Copenhagen, is due to open as soon as it is safe. You can find out more here: tranen.nu/show/2020-stine-deja-cold-sleep/ 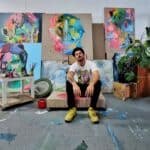 Santiago Pani’s creative process is meteoric, most of it has to do a lot with the idea and theory of the game, where there is a multitude of rules, yet luck and/or disarray have a big role to play.