Almine Rech has announced the opening of its second gallery in Paris, to be located on the prestigious Avenue Matignon in the 8th arrondissement, an area that has long been home to a prominent community of art galleries, auction houses, and cultural attractions. The inaugural show at Almine Rech Paris | Matignon will be a solo exhibition of new paintings by iconic American artist Kenny Scharf, titled Vaxi Nation, opening January 21st,

The gallery is located in an elegant Haussmann building and is situated on the ground and first floors, both of which will be dedicated to exhibition spaces to present the gallery’s roster of international artists and secondary market works in a new context within the city. Almine Rech | Matignon marks the sixth location internationally— and the second in Paris—for Almine Rech, whose flagship gallery is located at 64 Rue de Turenne in the Marais. The gallery on Avenue Matignon will be open to the public year-round and extend the gallery’s international program with rotating exhibitions on a more intimate scale.

“We are thrilled to build upon our long history in Paris with the new Matignon location, and to expand our presence in this city, as its creative culture and spirit have shaped the identity of our gallery since the beginning in 1989. Paris’ art scene continues to flourish, and I have great confidence in its future as one of the most prominent hubs of the art world. It is particularly special to open our new space with an exhibition of Kenny Scharf’s most recent paintings, and to debut a dynamic selection of works to our audiences in Paris.”

Kenny Scharf (b. 1958, United States) who is represented by Almine Rech, is a renowned artist affiliated with the 1980’s East Village art movement in New York. Scharf developed a distinct and uniquely personal artistic style in paintings as well as sculpture, alongside his mentor Andy Warhol, and contemporaries like Jean-Michel Basquiat and Keith Haring with whom he invented street art, a term and movement of the end of 20th century. References to popular culture reoccur throughout his works, such as appropriated cartoon characters from the Flintstones and Jetsons, as well as imagined anthropomorphic creatures. Through ecstatic compositions and a dazzling color palette, Scharf presents an immersive viewing experience that is both intimate and fresh. Scharf’s multifaceted practice—spanning painting, sculpture, installation work, murals, performance and fashion—reflects his dedication to the creation of dynamic forms of art that deconstruct existing artistic hierarchies, echoing the philosophy of Pop artists. Yet Scharf’s artistic significance expands beyond the art historical terrain of Pop Art; the artist instead coined the term “Pop Surrealist” to describe his one-of-a-kind practice. His inclusion in the 1985 Whitney Biennial marked the start of his international phenomenon, a reputation that continues to thrive today.

Museum, Holland; Museo de Arte Contemporaneo de Monterrey, Mexico; Museu de Arte Moderna, Brazil; Sogetsu Museum, Japan; and many others. Scharf was born in Hollywood, California in 1958. He graduated from the School of Visual Arts, New York, in the 1980s. He currently lives and works in Los Angeles, California. 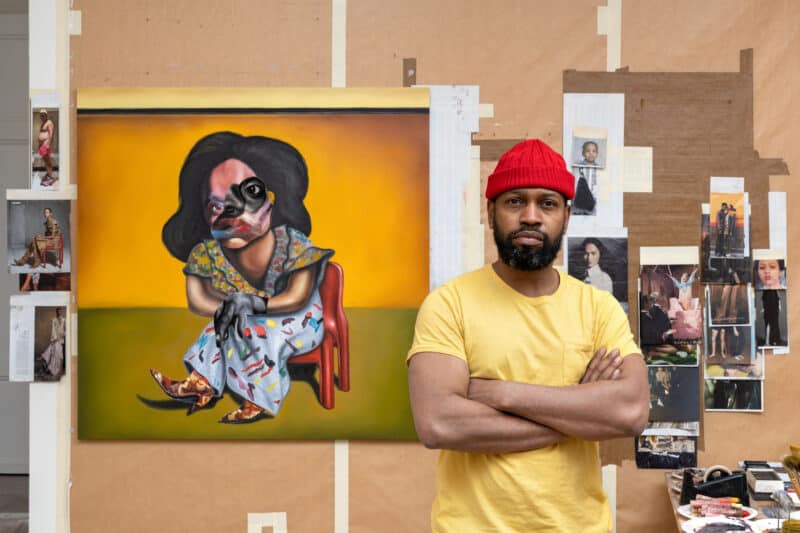