We Love the Snowman a sculpture by Swiss artists Fischli/Weiss in the park of the Fondation Beyeler for a whole year.

The sculpture shows the friendly and familiar figure of a snowman, consisting of three stacked snowballs, the top and smallest one displaying two holes for eyes and a dash for a mouth. It stands in a refrigerator with a glass door, allowing it to exist throughout the year.

Snowman illustrates the contradiction between nature and artificiality, displaying the penchant for the absurd typical of the work of Fischli/Weiss. The current context is different from the one the snowman in the fridge was originally conceived in. The image of complete energy dependency, so endearingly embodied by Snowman, acquires a new, poignant and terrifying dimension in view of the climate crisis.

Peter Fischli (*1952) and David Weiss (1946-2012) originally developed the work in 1989/90 for an exhibition in public space in Saarbrücken. In response to the site they had been allocated near a newly commissioned thermal power station, they decided to come up with something dependent on the power plant’s energy. The snowman was thus imagined using the power station’s residual energy, which – in an inversion typical of Fischli/Weiss – was converted to cold. The execution did not fully meet the artists’ expectations, but the wish remained to turn the idea into a work.

A rough design was created at the invitation of the Walker Art Center in Minneapolis in the late 1990s, yet it was not executed. Finally, the sculpture Snowman was realised in 2016. It travelled to the Sculpture Garden of the Museum of Modern Art in New York, to the terrace of the Art Institute in Chicago, and further onward. Our Snowman (one of four) is the only one in Europe and in Switzerland, and the first one operated by solar power. Snowman is the most recent work to be acquired for the Fondation Beyeler’s collection. 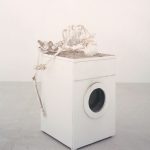 Spiegelgasse (Mirror Alley)’ presents the works of Swiss artists from the 1930s to now.
The exhibition tracks art history not as an evolutionary process, but rather as a hall of mirrors in which artists’ practices encounter, reflect, fragment, and recombine through time.

Basquiat bu Warhol. The illustrious Jean-Michel Basquiat would have celebrated his 50th birthday this year, so to commemorate the great […]