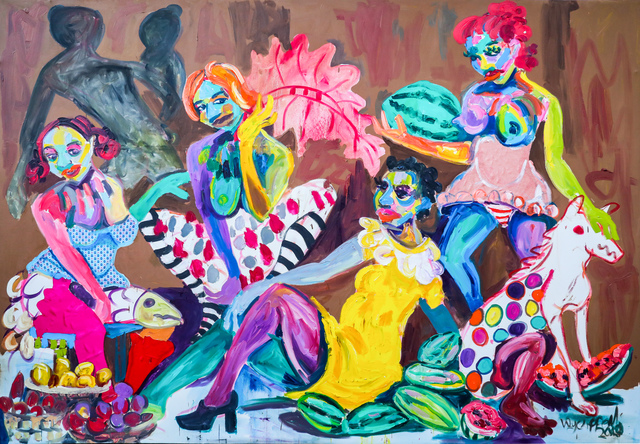 Strong female figures appear vibrant and empowered in Wycliffe Mundopa’s complex theatrical scenes. These are the residents of Mbare — one of Harare’s most colourful townships — whom play a central role in not just the infrastructure of Zimbabwe’s largely informal economy, but also the shaping of a proud national identity. For his first solo exhibition with Kristin Hjellegjerde Gallery London at Melior Place, the Zimbabwe-based artist presents a powerful new series of work entitled 1001 Afternoons, continuing his explorations of the complexities of female existence in relation to his role as an artist and narrator. Informed by Shona linguistic idiom, rich cultural symbolism and personal and collective experiences, Mundopa’s work offers a poignant insight into Zimbabwe’s contemporary society.

Having grown up in Mbare — historically an entry port to the capital and still a bustling hub of trade in all its various guises —, the artist is a first-hand witness to the intimate and informal cultural structures, which simultaneously exploit and empower women. As such, his compositions hold a strong female presence through nuanced and skilful depictions that defy gender stereotypes and shed light on the pathos and drama of the lives of ordinary people in Harare. Significantly, the artist refuses to pass judgement on any of his subjects, presenting them instead as equals, each rendered with the same level of attention and artistic energy. 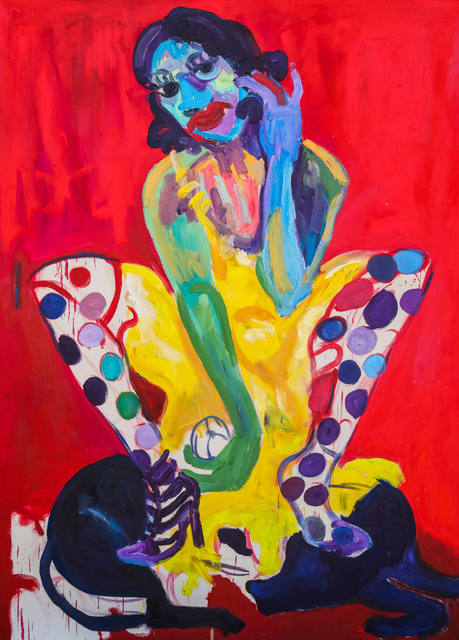 Through his practice, Mundopa pays homage to the likes of Matisse, Lautrec and Soutine as well as the Dutch masters, whilst utilising the grand genre of painting to elevate the people who were traditionally omitted from the aesthetic canon. Indeed, the artist’s use of sophisticated cultural symbolism functions creates a uniquely intimate and striking visual language that illustrates not just the narratives of the people themselves, but the very pulse of Zimbabwean society.

The exhibition’s title 1001 Afternoons alludes to the practice of storytelling in both literature and art by nodding to the Middle Eastern folk tales One Thousand and One Nights, but instead, of depicting nighttime scenes, Mundopa’s work occupies a unique limbo space. ‘Afternoons are a place of waiting, possibility, opportunity, dreaming or vacant despair. All are equal and present in this time frame,’ the artist commented. Within this realm, Mundopa’s subjects appear liberated from cultural preconceptions and their everyday contexts, inviting the viewer to more actively engage with the creative process by imagining potential narratives for themselves. At the same time, this allows for a greater level of relatability in which viewers are given the freedom to identify with the subjects and scenes through their own subjective gaze. Indeed, it is this deep level of engagement and artistic sensitivity that makes the artist’s work both timeless, and aesthetically and intellectually compelling.