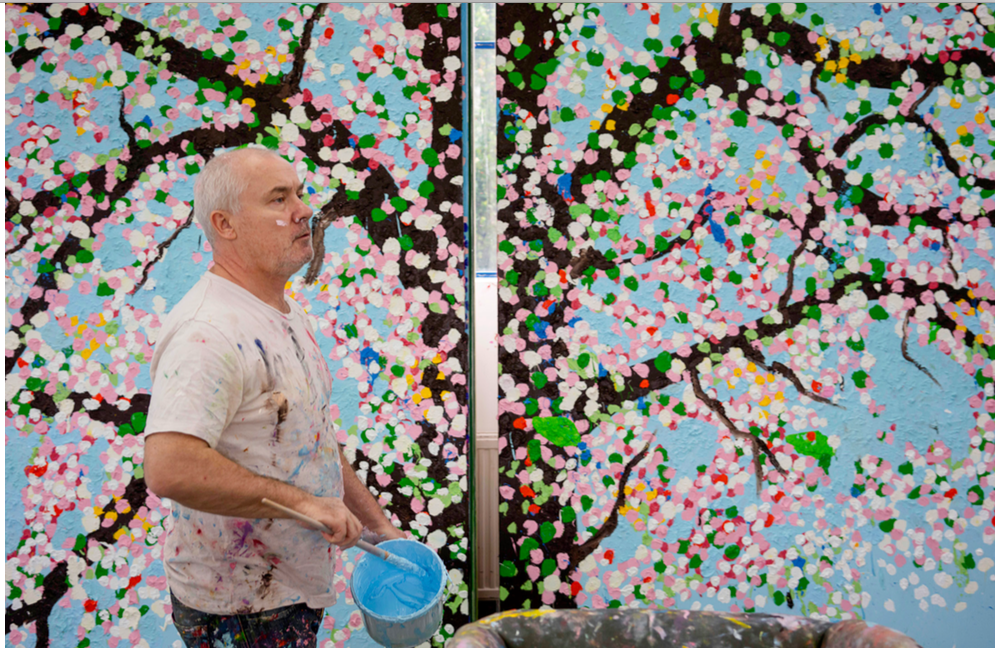 Despite the COVID-19 virus Damien Hirst is still scheduled to exhibit his latest paintings, ‘Cherry Blossoms’, at Fondation Cartier in Paris. The solo exhibition will run from June to November 2020.

The result of two years of intense work in his London studio, the series is part of Hirst’s career-long investigation into painting. The Cherry Blossoms were begun shortly after Hirst’s sculptural project ‘Treasures from the Wreck of the Unbelievable’ (2017). Referencing both Impressionism and Pointillism, as well as Action Painting, the series revisit the spontaneous joy of painting.

The imagined mechanical painter, omnipresent in the ‘Spot’ and ‘Spin Paintings’ series, is replaced in the ‘Cherry Blossoms’ series by the fallibility of the hand of the artist working in his studio. Cherry Blossoms marks the artist’s first museum exhibition in France.

“The Cherry Blossoms are about beauty and life and death. They’re extreme – there’s something almost tacky about them. Like Jackson Pollock twisted by love. They’re decorative but taken from nature. They’re about desire and how we process the things around us and what we turn them into, but also about the insane visual transience of beauty – a tree in full crazy blossom against a clear sky. It’s been so good to make them, to be completely lost in colour and in paint in my studio. They’re garish and messy and fragile and about me moving away from Minimalism and the idea of an imaginary mechanical painter and that’s so exciting to me.”

The Cherry Blossoms reinterpret, with playful irony, the traditional subject of landscape painting. Hirst combines thick brushstrokes and elements of gestural painting, referencing both Impressionism and Pointillism, as well as Action Painting. The monumental canvases, which are entirely covered in dense bright colors, envelope the viewer in a vast landscape that traverses the boun- daries of guration and abstraction. Cherry Blossoms are at once a subversion and homage to the great artistic movements of the late nineteenth and twentieth centu- ries. They are part of the pictorial investigation carried out by Hirst since the start of his career, which explores color, beauty, perception and the role of the artist.

After studying in Leeds and then Goldsmiths College of Art in London in the late eighties, Damien Hirst quickly became the face of the group that came to be known as the Young British Artists. These artists, which domi- nated the British art world in the nineties, shared a taste for experimentation and art viewed as provocative by some. Hirst’s Natural History series – in which bodies of animals are framed in formaldehyde- lled tanks – soon became emblematic of both the artist and the entire contemporary art scene. Painting has always played an essential role in Hirst’s work: “I’ve had a romance with painting all my life, even if I avoided it. As a young artist, you react to the context, your situation. In the 1980s, painting wasn’t really the way to go.” Hirst made initial forays into retro abstract expressio- nist styles, what he has himself described as a “paint how you feel” approach. He quickly, however, began to look at 60’s minimalism, embarking on his conceptually endless Spot Painting series in the late eighties. In this series, colored dots, which appear to have been painted by a machine, erase all traces of human intervention. The ironically named Visual Candy series (1993-1995), meanwhile, made up of thick splats of paint and exu- berant superimposed colors, celebrated the pleasures of painting.