How do we perceive objects when they become “activated” by a performer? Can there be, thereafter, a neutral spectatorship? ‘Forum: Bread and Games’, curated by Natalija Paunic for Open Space, reflects on these questions, considering the precariousness of authors’ ideas and authorship. The exhibition, which took place at Ugly Duck over the course of three days, presented a series of objects and installations which were subsequently “activated” by artist-led guided tours, live actions, talks and sound performances. 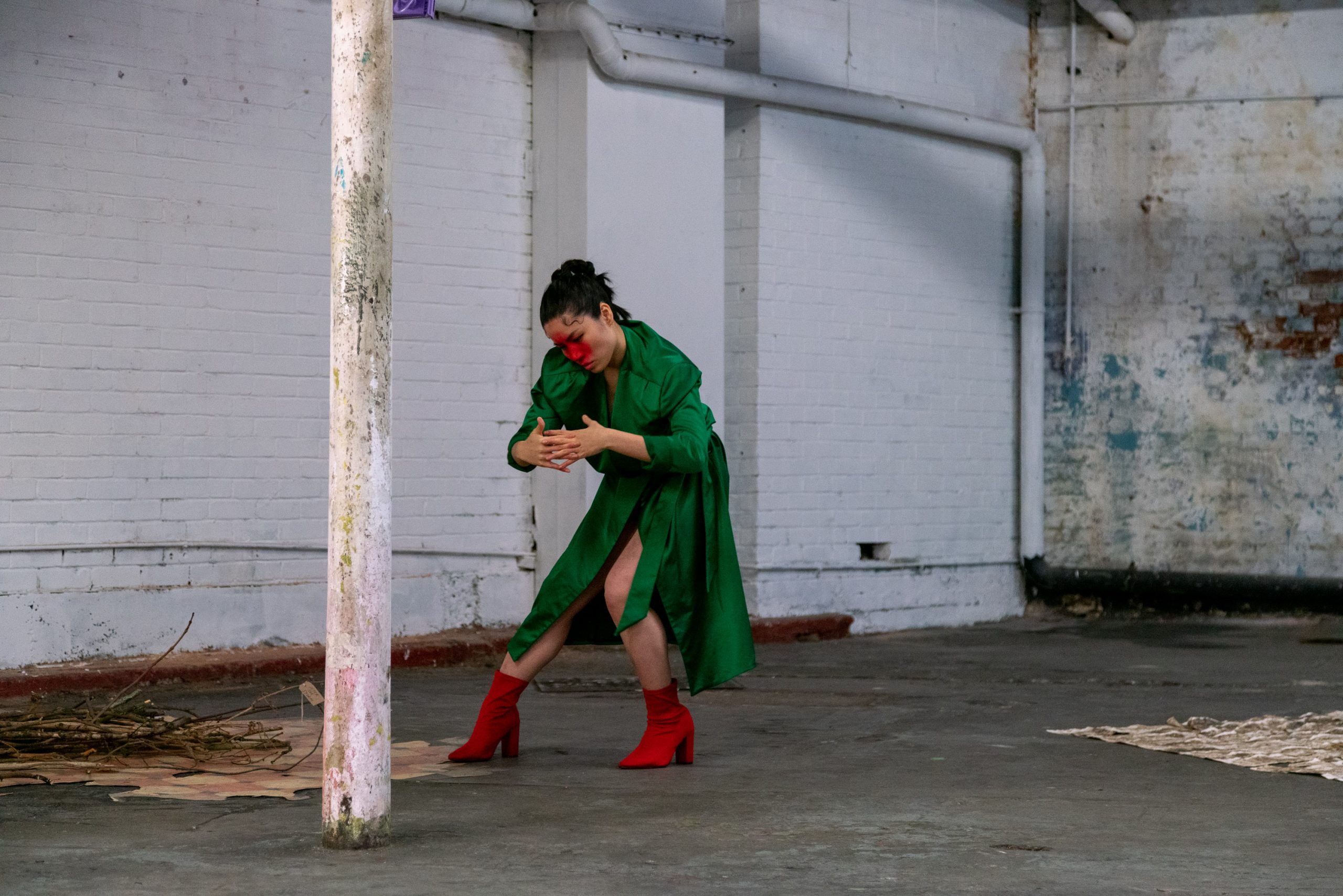 The title, Bread and games comes from the Latin panem et circenses, an idiom which in contemporary culture often refers to an adulatory mass manipulation. In the exhibition, this almost demagogic treatment of meaning becomes evident in the constant shift that ideas and interpretations acquire. Can the viewers experience the exhibition from a neutral posture, maintaining their views on the artworks even after they have been illustrated by their makers? Or will these become inevitably manipulated and deconstructed by each of the artist’s intervention? 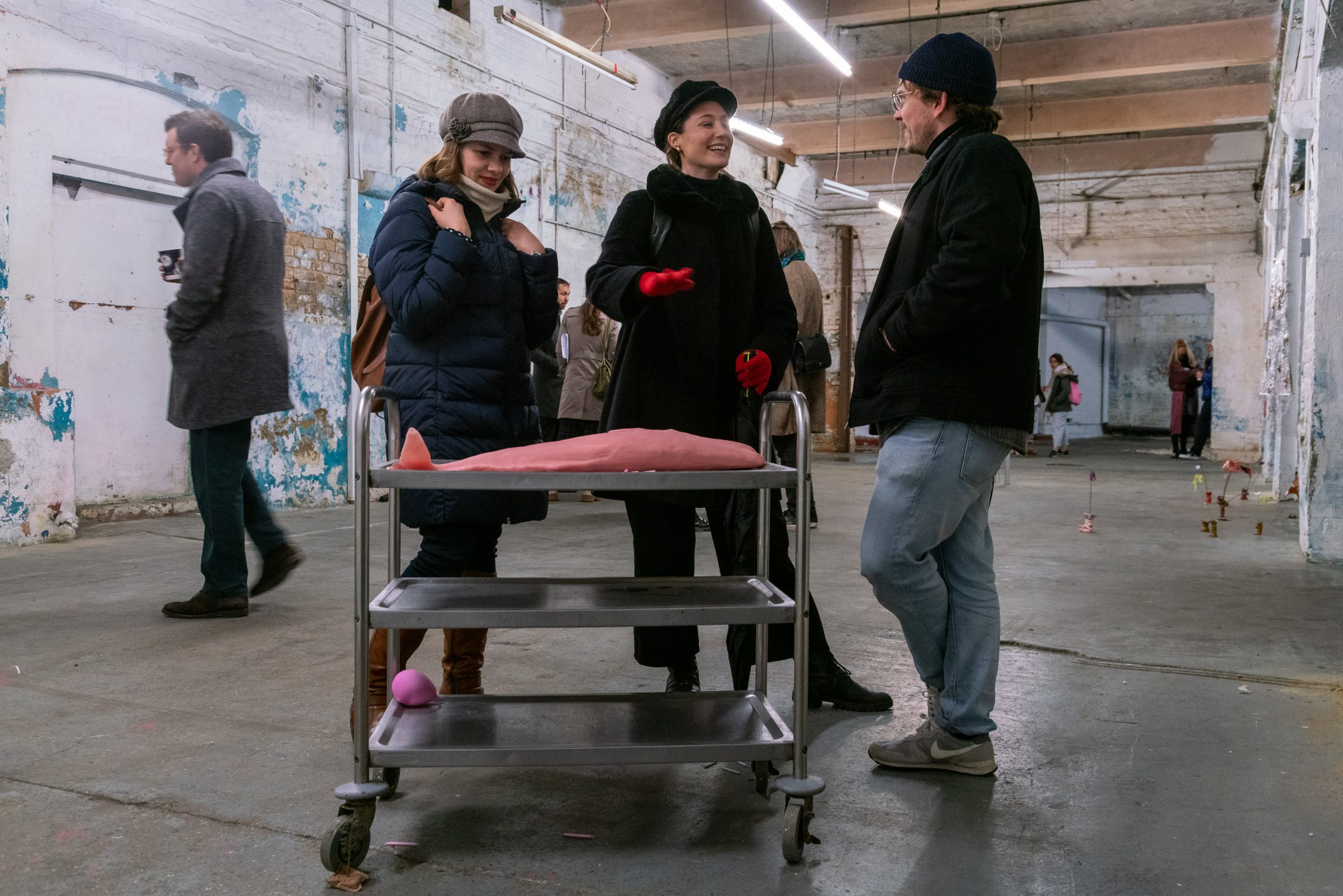 Each year, Open Space chooses a curatorial theme to investigate across a rich programme of performances, talks, residencies and exhibitions. These explore many different art media, like writing, sculpture, and most peculiarly food, in the programme Edible Goods. This year, the theme is Manufacturing Memory, which examines the dichotomy between memory and technology. Bread and games provokes introspection and instigates intimate responses within an unpredictable fictional narrative. Bread and Games, both in its original meaning and in the direction given to it by Paunic, illustrates the polysemous nature of ‘meaning’. It repeatedly challenges the viewer’s experience, allowing even the most personal memories to become compromised by a fictional, unpredictable narrative. 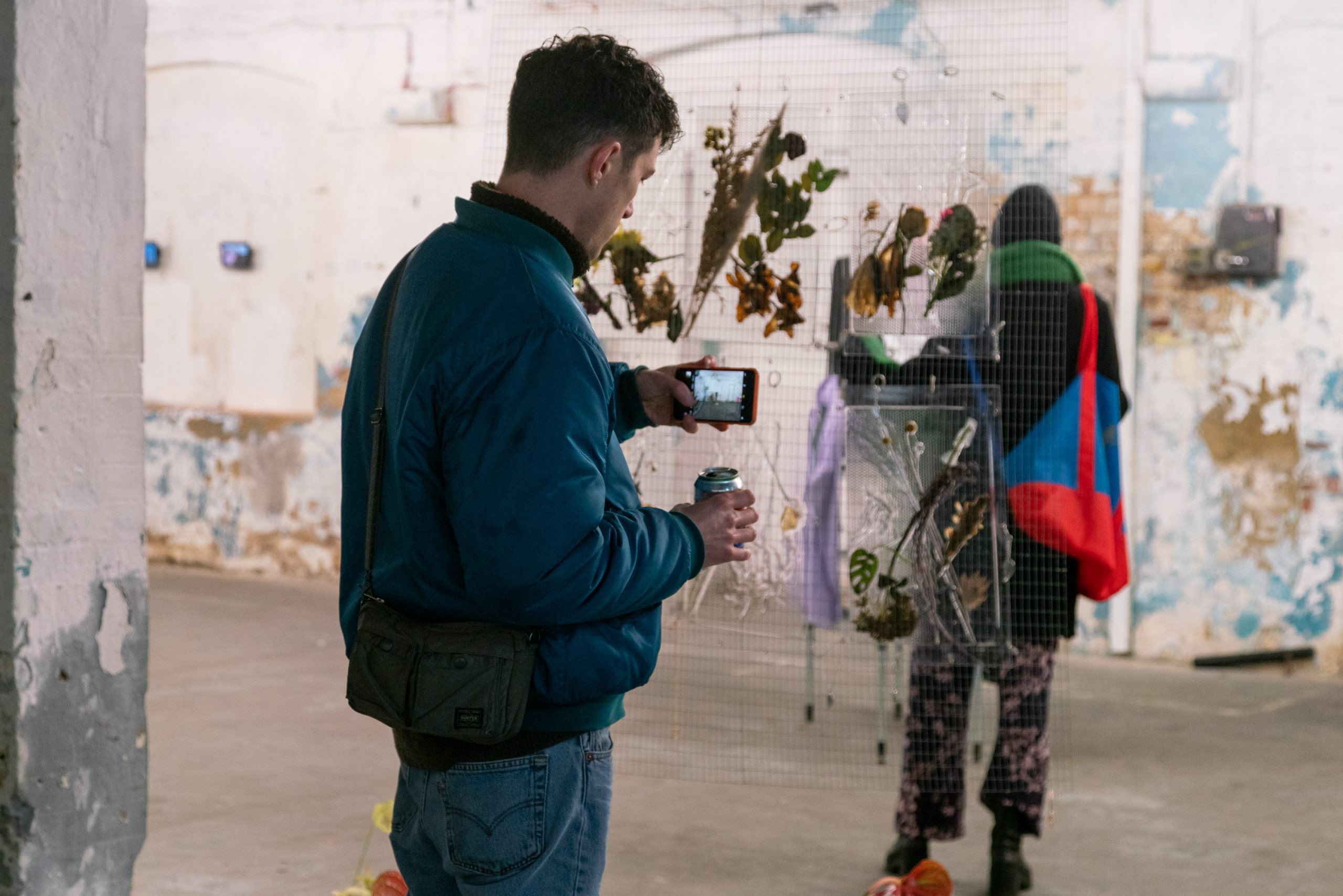 The interventions that took place throughout the exhibition were initiated by the individual objects scattered around Ugly Duck. These, in their own right, explored different modes of storytelling in relation to the real and the intended, the remembered and the known, the virtual and the material. At the entrance, Teal Griffin placed a bottle of milk (maternal, abject, uncanny) which had spilled all its content on the floor. In front of it stood a pink whale-shaped cake, inedible, and therefore, again, uncanny. A plastic grid inhabited by semi-dead, vacuum-sealed flowers led to a bunch of dried branches and a used copy of ‘A Land’– dismembered, covered in mud. Re-appropriating the space, the six artists fictionalised the narrative of the exhibition, so that the audience would experience their new interpretations rather than the original voice of the curator. Control of the original idea is lost, allowing the public to craft memories dependent on chance and choice, rather than a singular exhibition theme. 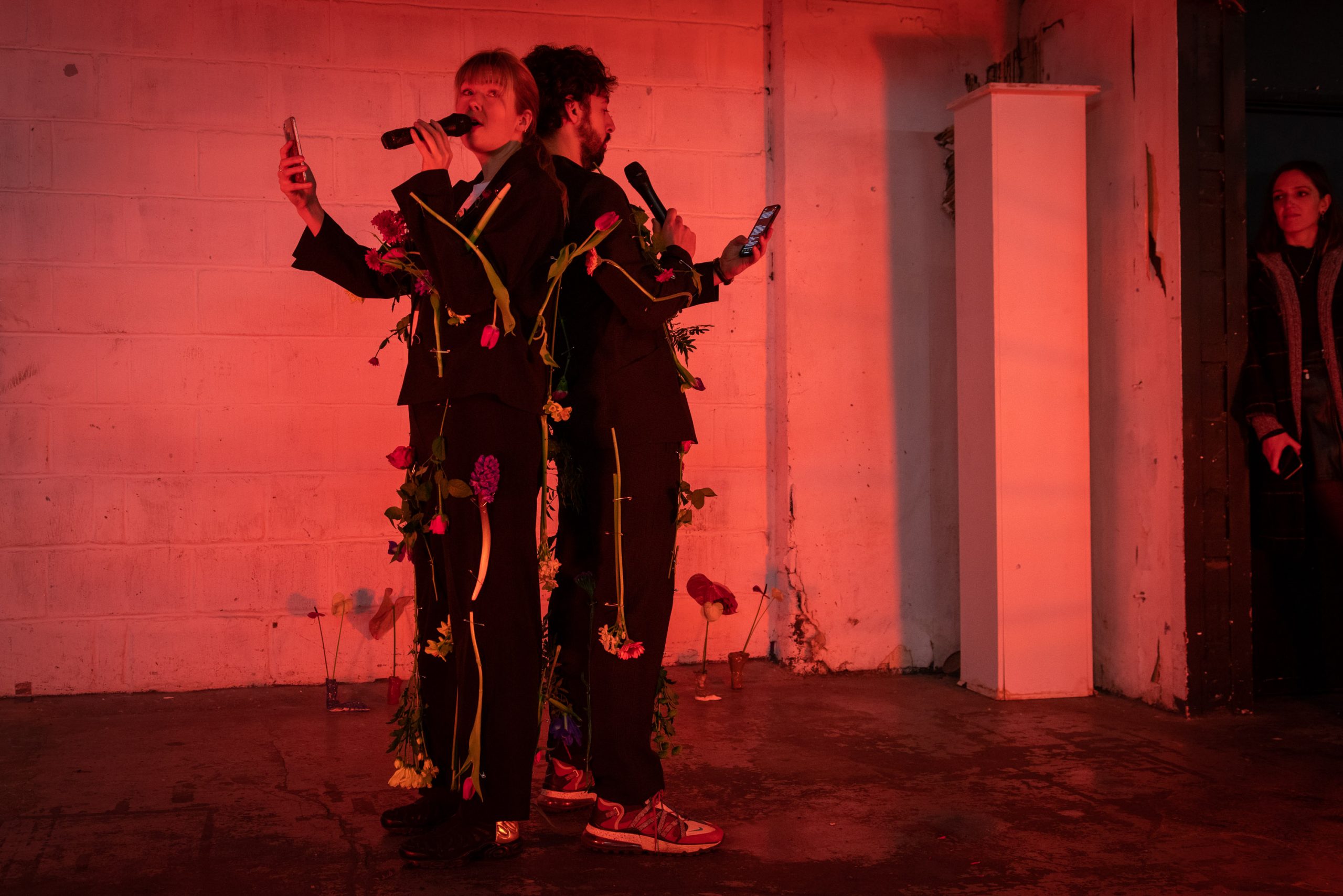 I attended Lea Collet’s performance. A feeling of “faux-familiarity”, an uncanny play between credible fictional and satirical reality, pervaded it. Her work imagines digital love stories and ‘online emotions’, examining how we buy into emotional manipulation with technology and reality TV. She recently wrote a piece about the fabricated romantic game theory involved in shows like Love Island. For the Forum, Collet exhibited two phones, hanging precariously from a column, which streamed a bizarre exchange of thoughts on cross-pollination. Separated from its botanical realm, it referred more to an abstract, inefficient transmission of feelings via the digital world. When the artist, joined by Swan L’haoua, performed the work, she intertwined flower names with emotional states, voluntarily creating confusion and bewilderment. The work comments on our current state of “collective disconnection” (press release), something often discussed as being the result of the introduction of technology into our daily routines. The performance, while very engaging — red lights, captivating music, eclectic costumes — was read through an iPhone screen, with the actors never really looking at the members of the audience. This clearly reinforced the distance between online and offline emotions and life. 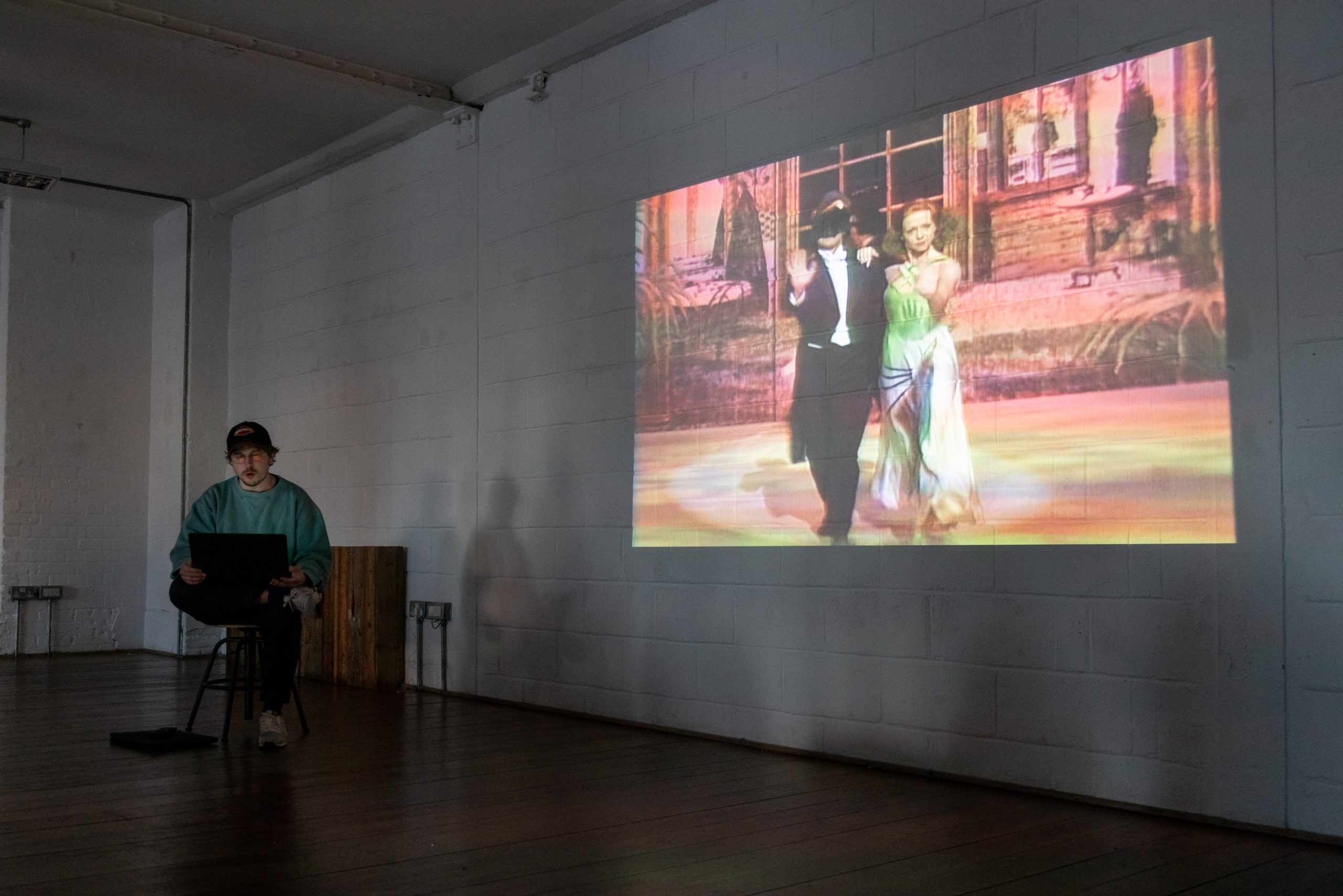 Bread and games varied between an intention to bring together and break apart, most visible in Louise Ashcroft. Her work is characterised by a funny, comedic tone grounded in a political satire rather than a light humour. For this exhibition, Ashcroft engaged with the landscapes relating to the other exhibiting artists. She interpreted their stories, creating one possible truth about them. This speaking “fantasy to power”, as she describes it, can only ever be highly fictionalised. Yet, if it is her voice to precede the audience’s experience of these works, what are we to make of it? What kind of authority can we attribute to Ashcroft’s interpretation? And what is left of the works themselves? Does the artist, the performer, really activate the object? Or shall the object be considered ‘active’, alive, meaningful a priori? What is the artist authority in establishing a meaning, if there is one to be fixed when she/he is performing the object? Because, ultimately, it seems to be this the defining border between subjective interpretation, free-will, and author-authority. This, also, is the utmost problem with which many artists are faced right now. If, say, you Mae sculptures, and you also perform them at some point, can the audience still see your concrete objects eschewed from their performative role? Can the sculpture, in this case, remain a 3d surface in its own right? Or will it forever be associated with the way it has been performed? Why are we so keen to accept any form of interpretation that is given us by a press release, a text on a wall, or a performance? Are the objects weakened by being given a live existence? Or is their meaning increased in their having a dual existence, temporary and physically endless?