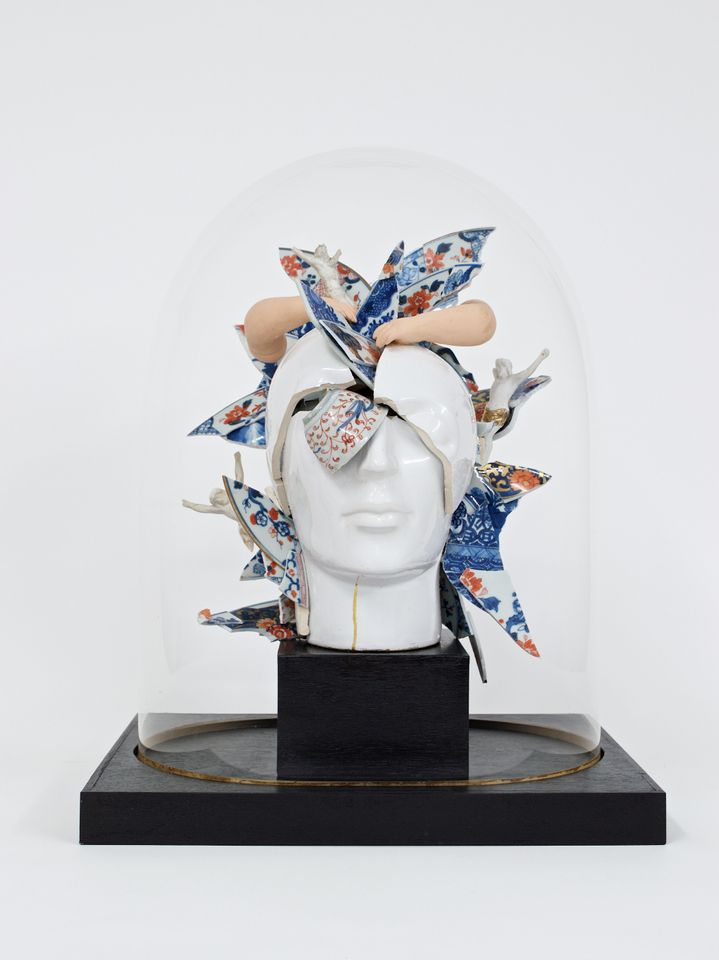 The latest group show at Kristin Hjellegjerde brings together the work of 16 artists who are exploring portraiture through their different mediums. The exhibition’s title All the Days and Nights nods to a note written by Frida Kahlo accompanying a portrait that she gifted to her friends on the occasion of their marriage in which she references the power of a portrait to not only transcend time, but to also offer a kind of double, a ‘stand-in’ presence. Hailing from different backgrounds and artistic practices, the show’s participating artists explore contemporary forms of portraiture through representations of the self, the other and the imagined.

‘The idea of an image as avatar is familiar to us through social media profile pictures, passport photos or video games, and we have become used to feeling in control of how we present ourselves,’ says Norwegian artist Kristian Evju who is currently working on a series of drawings and paintings reimagining early 20th century female mugshots. By transporting these women into new contexts, the artist liberates the individual from their assigned narrative, thus provoking discussion around the limitations of representation and also the cultural associations attached to certain types of imagery. This idea links with Chris Agnew’s current preoccupation with the life of Bela Lugosi, the Hungarian actor famous for his role as Dracula in the 1920s and 30s. Lugosi experienced similar stereotyping which saw him continually typecast as a monster. Whilst Agnew’s work is based around this historical figure, the issues surrounding celebrity and othering are still very much pertinent today.

Through a series of haunting portrait paintings, Rebecca Brodskis also explores otherness in relation to the perceived self. Brodskis’ imagined characters often appear distant, not wholly present, as if lost in contemplation. They are metaphors ‘of contemporary man, condemned to extreme lucidity but constantly invaded by the fear of tomorrow’, the artist explains. Similarly, German artist Ruprecht von Kaufmann presents three small-scale paintings that depict certain types of people rather than specific characters. The artist’s ‘invented portraits’ possess a haunting quality, as if the figures are appearing from some distant dimension and in this way, they also reveal a kind of shadow portrait of the artist himself.

Whilst Nengi Omuku’s work is also interested in the complexities of identity, the Nigerian artist focuses more on the body and how the physicality of a person might communicate their state of mind. Meanwhile, Juliette Mahieux Bartoli presents silverpoint drawings from a new series inspired by space exploration and ideas around civilisation, identity, and perspective. The works examine how we use the genre of science fiction to view and understand cultural phenomena.

Kelechi Nwaneri presents a series of four portraits drawn from photographs, but featuring surrealistic imagery that explores the individual’s emotional experience and cultural identity. Meanwhile, Adam de Boer combines techniques such as batik, woven pandan leaf and carved teak and rawhide with Western modes of landscape and figurative oil painting to investigate his own identity as an American-born artist of mixed Dutch-Indonesian heritage as well as wider issues of authenticity within a post-colonial world.

Influenced by the aesthetics and themes of Romanticism, Christiane Pooley’s triptych of oil paintings show a repeated scene through which figures move, evoking the passage of time and a subdued sense of drama. By contrast, Lee Simmonds paints various figures awkwardly navigating a world of bizarre encounters and situations; the scenes are deliberately playful, simultaneously inviting and eluding interpretation. Haroun Hayward’s work also leans towards an abstract aesthetic with shapes and forms inspired by the rhythms and graphics of the 90’s acid house and techno music scene. The complex, textured surfaces convey a sense of movement in an attempt to share an experience of transcendence in which the self is lost and a euphoric state is attained. Also exploring forms of transcendence, British artist Richard Stone revisits a series of recent works, which mix found sculptural figures with layers of draped obfuscation. By obscuring the figures, the artist creates new narrative possibilities whilst also transporting the figures into a contemporary context.

With a practice spanning drawing, installation and sculpture, Radhika Agarwala plays with the fossilization of material and memory. For this exhibition, she presents a series of gnarly, knotted sculptures that pulsate with a tactile sense of danger and uncertainty in response to humanity’s devastating impact on the natural world. By contrast, Bouke de Vries meditates on the beauties of imperfection. The Dutch artist’s practice originates in ceramics conservation, but for his latest sculpture, de Vries breaks apart a ceramic head to reveal its making. He defines the artwork as a ‘mini retrospective’, through which he explores his role as a maker whilst also contemplating on the beauties of imperfection.

Umar Rashid’s work is an ongoing illustration of a narrative written by the artist as an alternative to conventional historical stories. In particular, the artist invents narratives focusing on people of colour, who are often marginalized and omitted from the historical record. Drawing on pop culture references, revolutionary movements, maps and cosmological diagrams, Rashid’s work is a complex collage of time and cultural identities. Muhammad Zeeshan also engages with issues of culture and conflict through his practice. In his latest work, the Pakistani artist examines contemporary responses to Instagram’s nudity prohibitions in relation to the historical culture of the Rodiya women in Sri Lanka who were forced to expose their upper body or else risk heavy taxation. Through this comparison, the artist invites us to reconsider social norms and the lens through which we perceive others.

Combining abstract art, sculpture, figurative painting and collage, All the Days and Nights celebrates the diversity of human perception and expression. The works on display move across time and space, inviting us to contemplate the complexity of personal and collective identities.