Matty Bovan to create an immersive, participatory, art installation that raises timely questions about identity and who controls it. - FAD Magazine
Skip to content

‘Matty Bovan is one of the brightest names on the British fashion scene.’ The New York Times

Yorkshire Sculpture Park have announced a collaboration with leading young fashion designer Matty Bovan. Bovan will take over the Bothy Gallery from 28 October to 1 November to create an immersive, participatory, art installation that raises timely questions about identity and who controls it. Visitors can either book onto, or drop into, sessions in which they are invited to choose from a range of sculptural, wearable, items. Participants will engage with the artwork for a minimum of 10 minutes, to construct a new self-image that will be documented in a unique way, blurring sculpture, fashion and photography, with the designer heavily involved.

Over 95 million images are posted on Instagram every day, owned by Facebook, whose terms state that the user grants ‘non-exclusive, fully paid and royalty-free, transferable, sub-licensable, worldwide license to use their content’. Bovan is drawing attention to the fact that most of us are already willing participants in the distribution of our images and image to an unseen mass – anyone who has been tagged in a Facebook photograph has already agreed to their face being recognised by an algorithm,
for example. Facebook also owns a patent to identify people who have been photographed by the same camera, based on its dust marks, in order to suggest friends of friends – leading commentators to suggest that we ‘need to have a big collective think about what we want from the world of big data and AI, towards which we are currently sleepwalking’. (John Lanchester ‘Document Number Nine’ in London Review of Books 10.10.19).

Bovan has already established an internationally-respected fashion practice, and will have a catwalk show at London Fashion Week on 14 February 2020, following a number of London Fashion Week collections which reveal his interest and research into social behaviours and phenomena, such as the Pendle Witch Trials. Based in Yorkshire, Bovan has acknowledged YSP as being a formative influence and undertook a research residency in the National Arts Education Archive in 2019, and so it is fitting that the organisation can support and share this significant project. It is timed to coincide with Joana Vasconcelos in the
Underground and open air, and Public Faces / Private Lives in the Weston Gallery, which in different ways also consider the construction and dissemination of ‘self’ in the digital age.

About The Artist
Having grown up in York, where he is still based, Matty Bovan, 29, graduated from Central Saint Martins in 2015 with an MA specialising in Fashion Knitwear. His 12-look graduate collection opened the final show, exhibiting his cacophony of sculptural knits, textures and wild, handmade adornments, which earned him the L’Oréal Professionel Creative Award, closely followed by the LVMH Graduate Prize 2015, going on to work with Marc Jacobs and Miu Miu.
He has worked with various brands, including: Coach NY, Gina, Louis Vuitton, Miu Miu, Stephen Jones Millinery, M.A.C Cosmetics, and Miller Harris, and his work is worn by a loyal fanbase, including Adwoa Aboah, Björk, Rita Ora, Georgia May Jagger, Winnie Harlow, Daisy Lowe, and Efie Reigate. He is a recipient of the BFC NEWGEN bursary for the second time, supporting his Spring/Summer and Autumn/Winter 2020 shows, and has been twice nominated for Emerging Designer Womenswear at the Fashion Awards 2018 and 2019. British Airways recently launched Made by Matty Bovan, a love letter to his late grandmother illustrating
his appreciation of craftsmanship and British heritage, part of their The BA 100, celebrating 100 makers of Modern Britain.
In September 2018, he collaborated with artists Rory Mullen and Adam Leach to create a fully immersive site-specific installation comprising video projections, live performance and sculpture, within the Leeds Room at the London Design Biennale at Somerset House. Entitled Just/Unjust, it was inspired by a carved wooden chimneypiece depicting the Dance of Death in The Red Drawing Room at Burton Agnes Hall, an Elizabethan manor house near Bovan’s home and studio in Yorkshire. London’s Design Museum nominated a tweed and tulle gown, topped off with a Stephen Jones for Matty Bovan balloon-festooned headpiece, a finale look from his Autumn/Winter 2018 show, for inclusion in their Beazley Designs of the Year 2018 exhibition. 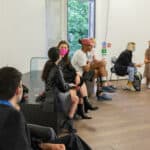