This body of work is inspired by Knight’s fascination with nature in general, and more specifically with the rose as an enduring symbol of beauty. The series has roots in the work of 16th and 17th century still life painters like Jan Brueghel the Elder and Jan van Huysum, but these large-scale works could not be more contemporary, dramatising the timelessness of nature.

“We are immensely excited to be exhibiting this series of photographs by Nick Knight, which not only capture the intense, dream-like, evanescent beauty of a flower which is found in countless gardens, but also challenge our assumptions of familiarity. These are so much more than photographs of roses. They are made using digital technology at the cutting edge, made painterly through the way Knight uniquely manipulates the physical media. Their scale is overwhelming. They are not what they appear to be, and so they demand us to look closely, and think about what we are looking at.”

Nick Knight cuts selected roses straight from his garden and arranges them specifically, using only daylight to illuminate his subject. Photographed on an iPhone, the digital images are then enlarged and filtered through software that uses AI to infill the space between pixels, calling to attention the painterly qualities of the blossoms themselves. What appears at first glance to be a historical approach to flower photography is, upon closer inspection, at the very cutting edge of imaging technology. The resulting images are no longer photographs, but rather, digital representations of photographs. The works respond beautifully to their surroundings at Waddesdon and its important Victorian garden, created by four generations of Rothschilds who themselves were passionate about horticulture, and in particular, the rose. They also create links to the collections, like the flower painting on 18 th -century Sèvres porcelain and 17 th – century Dutch still life. Flowers are laden with symbolism, none more so than roses, for their associations with love, faith, and truth. There is something both intensely real and allegorical about these images, in their capturing of a moment in the brief life of a rose, in some cases as they start to decay.

“I am delighted that Lord Rothschild has invited me to exhibit at Waddesdon. It is not only one of the country’s finest and most beautiful estates, but with its commitment to canonical and contemporary art it seems the perfect place to show my series ‘Roses from my Garden’ which references the rich history of classical painting whilst also looking towards the exciting world of new technologies such as Artificial Intelligence.”

About The Artist
Nick Knight OBE (b.1958) is a British fashion photographer who is also founder and director of SHOWstudio. He is an honorary professor at University of the Arts, London and was awarded an honorary Ph.D. by the same university. For the last forty years, Nick has shot award-winning images for commercial and editorial purposes. His ground-breaking creative collaborations with leading designers including Yohji Yamamoto, John Galliano, Gareth Pugh and Alexander McQueen, alongside his vanguard advertising campaigns for prestigious clients such as Dior, Lancôme, Tom Ford, Calvin Klein or Yves Saint Laurent have helped to make him a household name in both fine art and fashion. His stories in British Vogue, W magazine, Dazed & Confused, Another Magazine and i-D magazine have all pushed the industry past the classic parameters of fashion photography, while his award-winning music videos for Bjork, Lady Gaga and Kanye West have firmly established Knight as an eminent Director and Image Maker. His work has been exhibited at such international art institutions as the Tate Modern, Victoria & Albert Museum, Saatchi Gallery, the Photographers Gallery, Hayward Gallery, Serpentine Gallery, The Daelim Musuem, and the Gagosian Gallery.

Waddesdon Manor was built from 1874 by Baron Ferdinand de Rothschild in the style of a French early 16th-century château. Ferdinand was an inspired collector and the house was designed to showcase his exceptional collection of English portraits, French 18th-century furniture, Sèvres porcelain, and other decorative arts. When he died in 1898, he left Waddesdon to his sister, Alice. Upon her death, the house passed to her great-nephew, James de Rothschild, who inherited a substantial part of his father Baron Edmond’s great collection. In 1957, in order to ensure its future in perpetuity, Waddesdon was
bequeathed to the National Trust. The Rothschild family continues to run the property through a family charitable trust under the chairmanship of Lord Rothschild. 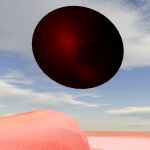 First VR artwork by Anish Kapoor to be exhibited at Waddesdon estate.

An exciting new collaboration between Acute Art and Waddesdon Manor will exhibit the first virtual reality artwork by the renowned British artist, Anish Kapoor in the dramatic setting of the Windmill Hill Archive on the Waddesdon estate.

Revolutionising The Rules Of Communication, The Brand Adopts Easy Access Technology To Bring Spirit Of Social Media Into The High-End
Calls On Nick Knight- Fashion’s Most Applauded Photographer- To Shoot It.

SHOWStudio Launches the SHOWCabinet in collaboration with Daphne Guinness