To commemorate the Moon landing’s 50th anniversary, Bohinc Studio founder Lara Bohinc recently welcomed guests at a private view of the Lunar House; Bohinc Studio’s first solo exhibition in London. Within the setting of a listed Victorian townhouse, in London’s King’s Cross, Bohinc’s signature aesthetic of clean lines and sharp curves was further dramatized by petrol blue flooring, ceiling and walls that undulated in the same manner as the chaise longues, armchairs and plinths. Against a cocoon of rich blue that suggested the cosmos, strategically placed statement boxes and vases – aptly named the Juno box and the Jupiter vase, respectively – and bold pieces of furniture adorned the space in which to suggest a constellation. The pieces in cream, dusty red, and powder blue, accented by brass frames, handmade metalwork and 3-D milled marble parts, complemented and contrasted the dark space beautifully. Since 2016 Bohinc has brought her angular yet feminine design principles and knowledge of industrial techniques to furniture and object design. Bohinc also presented the studio’s collaboration with Kasthall. Open to the public by appointment. 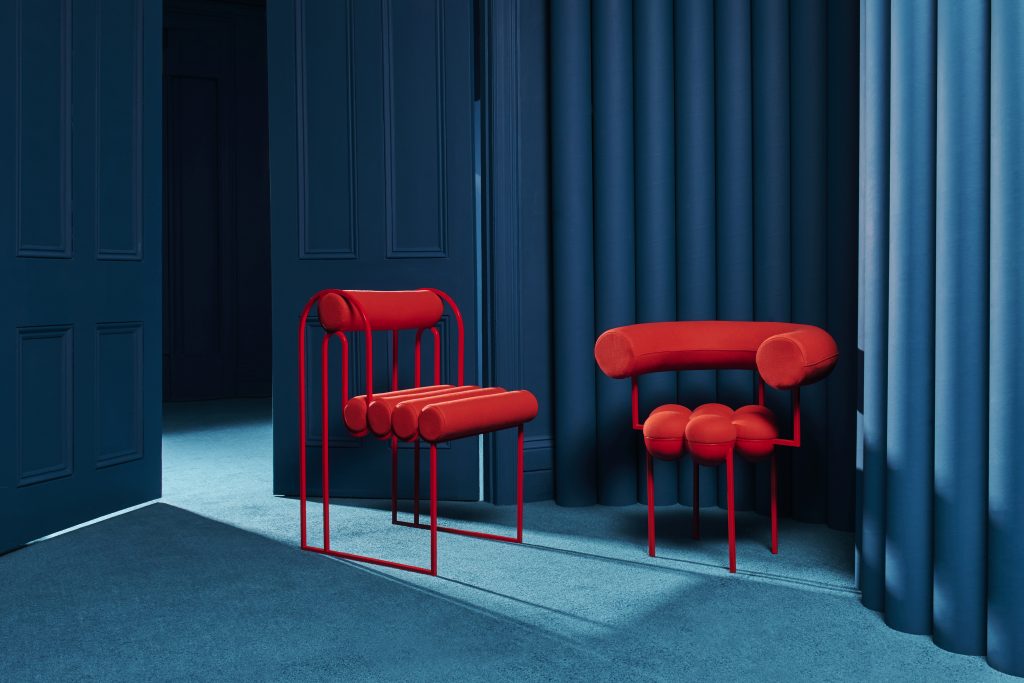 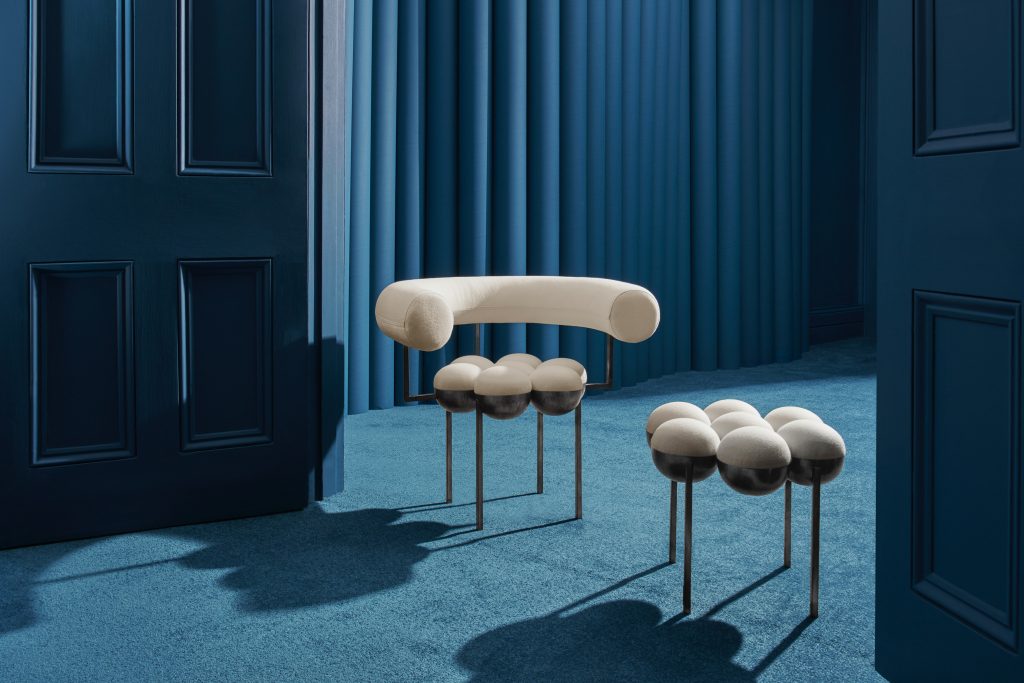 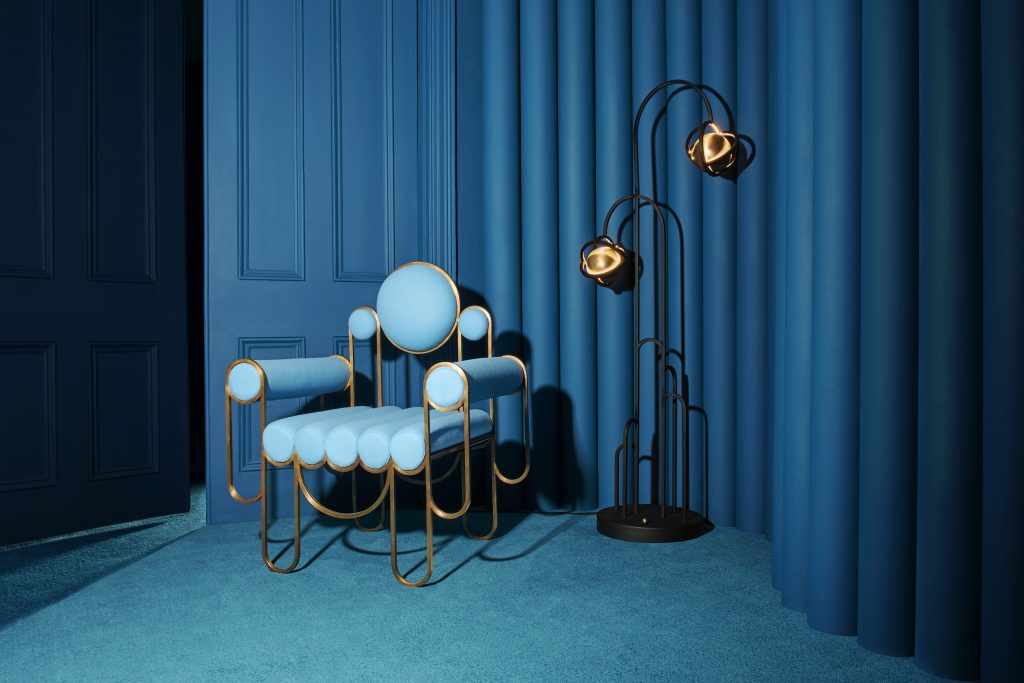 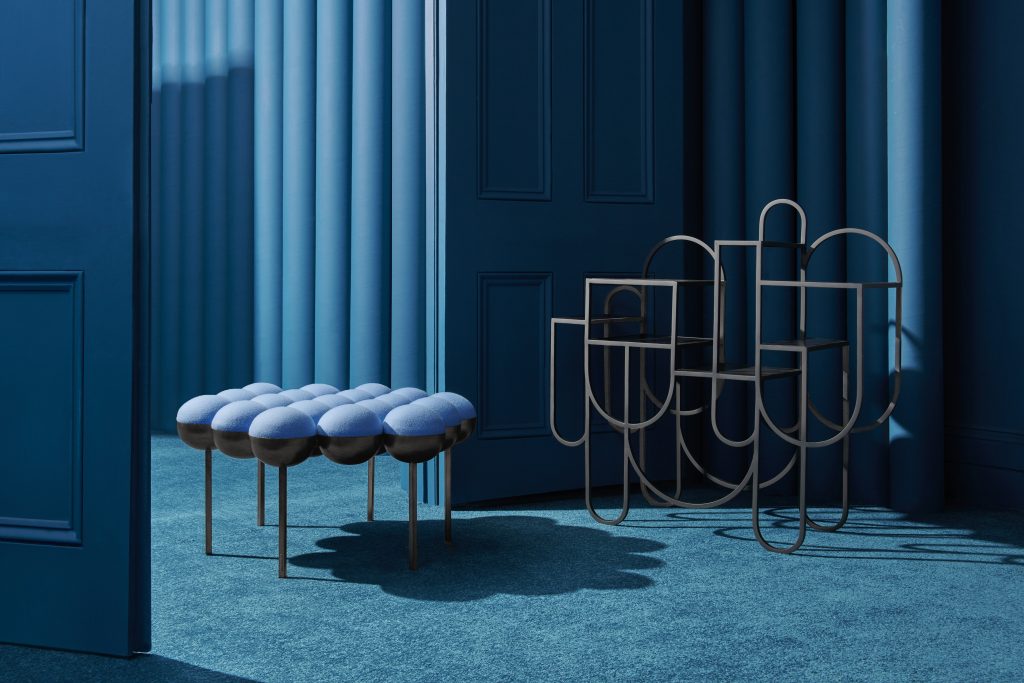 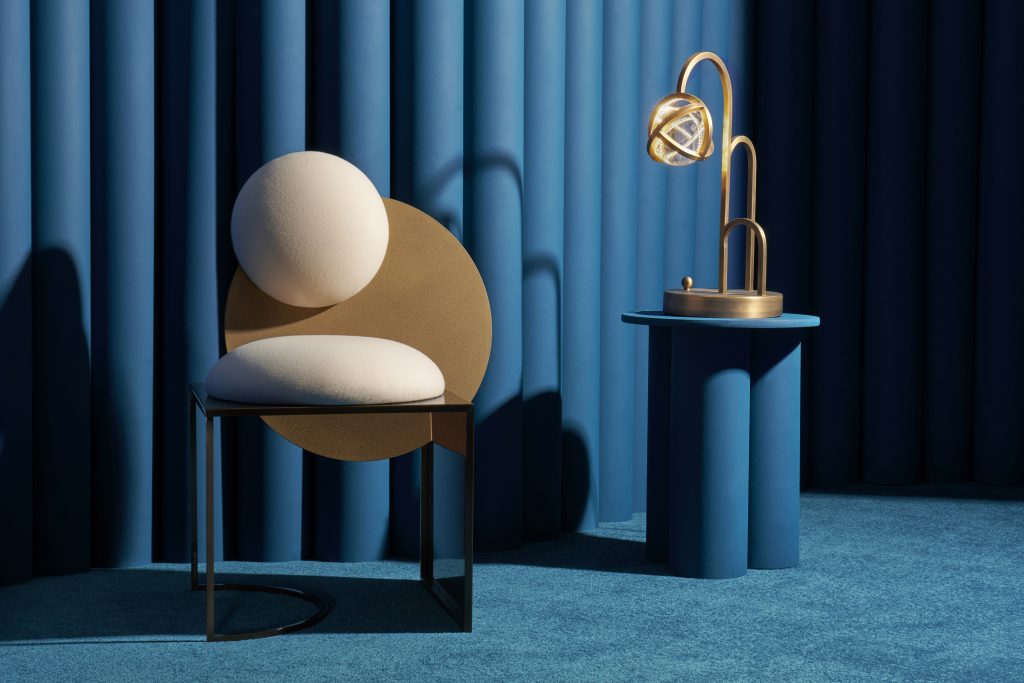 The arrival of a wind kissed autumn chill necessitates mandatory protection from the head down, however all year round a hat can add stylistic and symbolic value and is an instantaneous way to add LL Cool J credentials to one’s look. Kangol’s associations with counterculture may be far-reaching, yet its roots track back to a remote corner of North West England. At its core Kangol prides itself on producing quality products using many of the same techniques that were developed over 80 years ago by founder Jacques Spreiregen.
Adopted by the early hip hop pioneers and cultural influencers of 1980s New York, today Kangol is a cross-cultural fusion; taking the best of British heritage, the birth of hip-hop and mixing it with street style prowess. Legendary artists such as the Beastie Boys, the Notorious B.I.G., Eric B. and Rakim, Sugar Hill Gang’s Big Bank Hank whose violet bucket hat featured in their 1979 music video ‘Rapper’s Delight’ and Grandmaster Flash, who has one of his bucket hats in the Hip Hop Hall of Fame, all wore Kangol. Timely and worldly, Kangol’s versatility is what makes it a heroic, iconic classic! 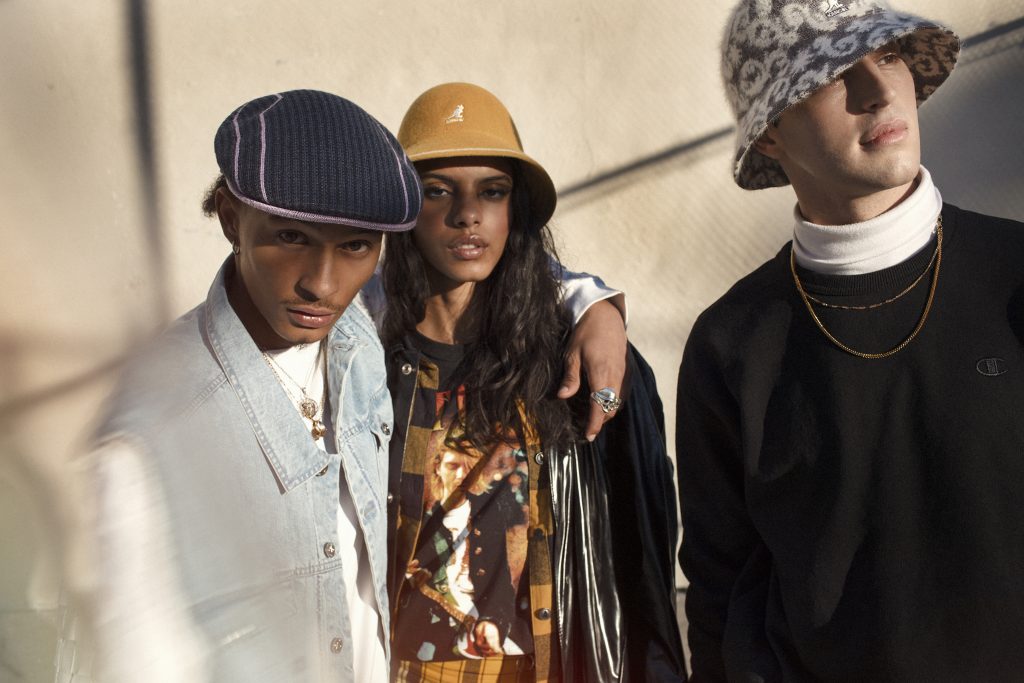 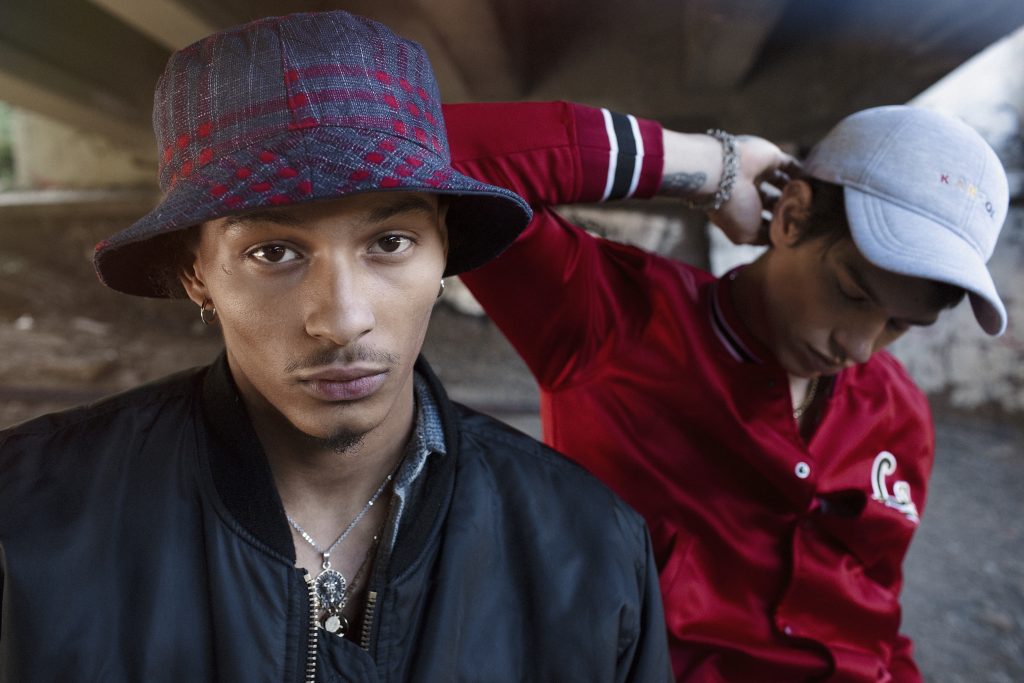 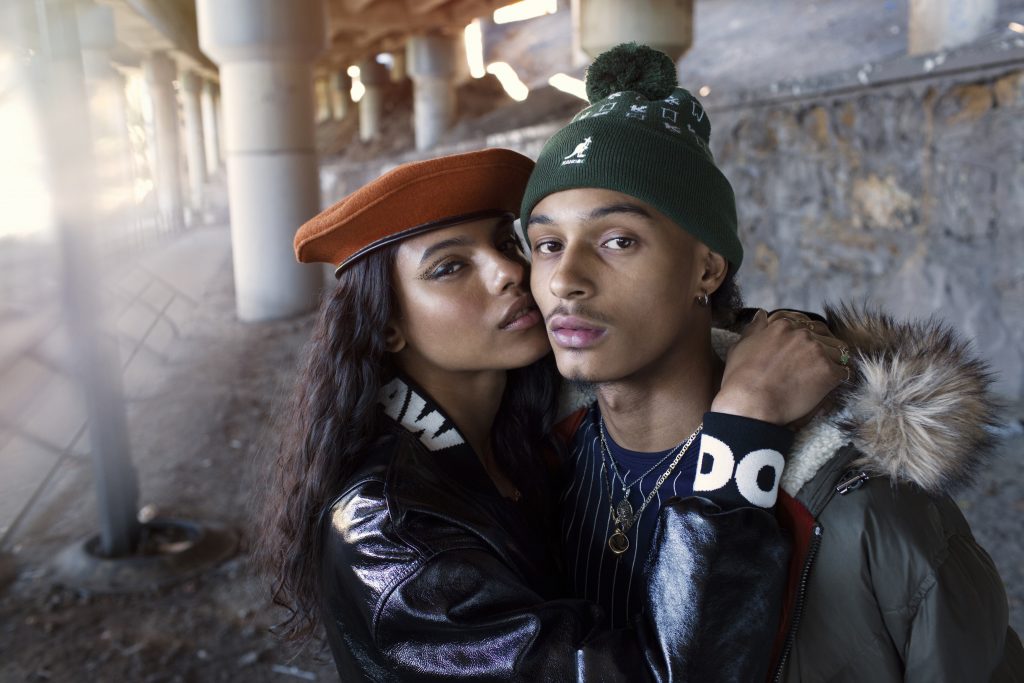 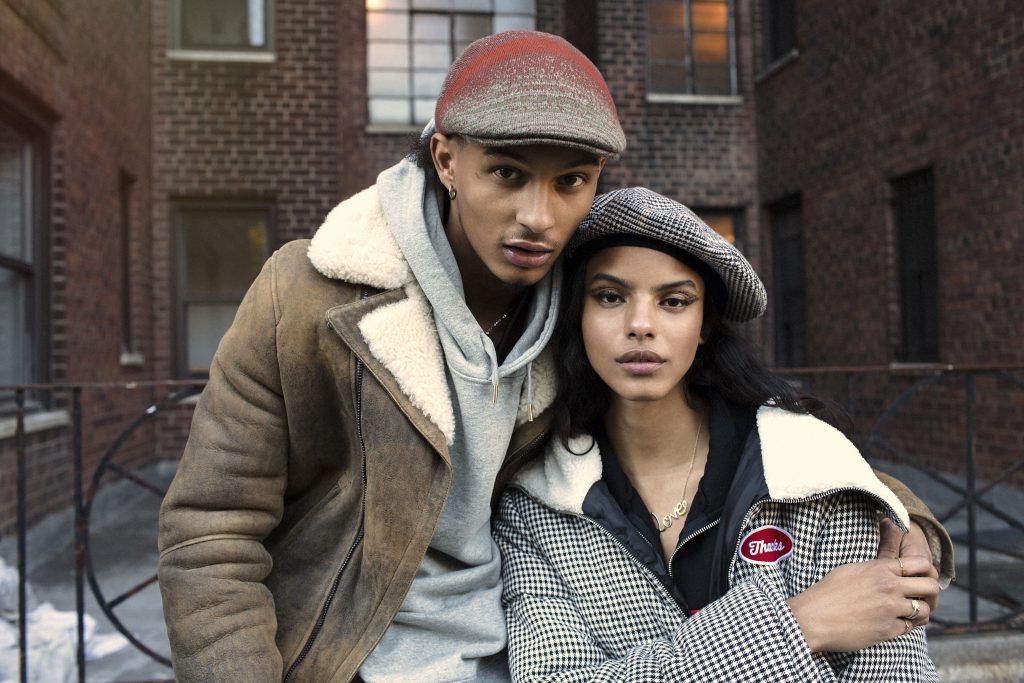 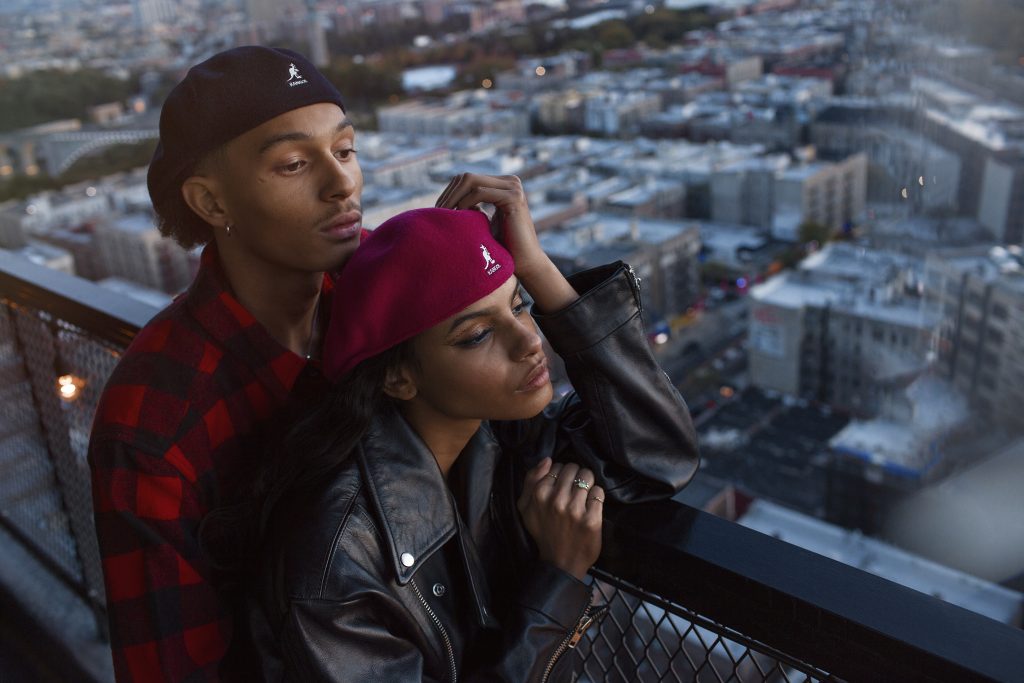 Sourcing inspiration from Japanese culture – citing cult films Kill Bill and Lost in Translation and Manga series The Promised Neverland as well as the book Japonisme ‘a Japanese-inspired guide to living a happier, more fulfilled life’ – it was with thrills, chills, spills and layers of frills that Preen’s punkish sensibilities took its cues from a country renowned for alternative style. Certainly one can imagine Preen’s SS20 womenswear collection being worn by all the cool gals hanging out in Harajuku.
Founded in 1996 by business and real life partners Justin Thornton and Thea Bregazzi, Preen by Thornton Bregazzi has evolved from a small boutique in London’s Notting Hill to a globally loved brand stocked across five continents. Not only do Preen produce six ready-to-wear collections a year plus seasonal offerings of accessories and footwear, but in recent years have developed a children’s wear line – Preen Mini – and a soft furnishings range – Preen Home. It is a label built on an aesthetic of dark romanticism hardened with tomboy touches. For Spring 2020 Preen presented a coherent series of looks that comprised of loose silhouettes, balloon sleeves and asymmetrical flounces. Ruffled skirts, voluminous dresses, spliced frocks, sequin-covered robes and ruched semi-sheer gowns were worn with oversized hoodies and grunge-style T-shirts illustrated with anime motifs. Flat buckled leather boots and metallic leather shoes that wrapped around the ankle lent a further rebellious touch. Given Preen’s commitment to sustainability, the collection was constructed from a combination of previous seasons’ leftover fabric, sustainably sourced viscose and georgette made from recycled plastic bottles and textile waste, demonstrating that sustainable alternatives needn’t compromise innovation and style. 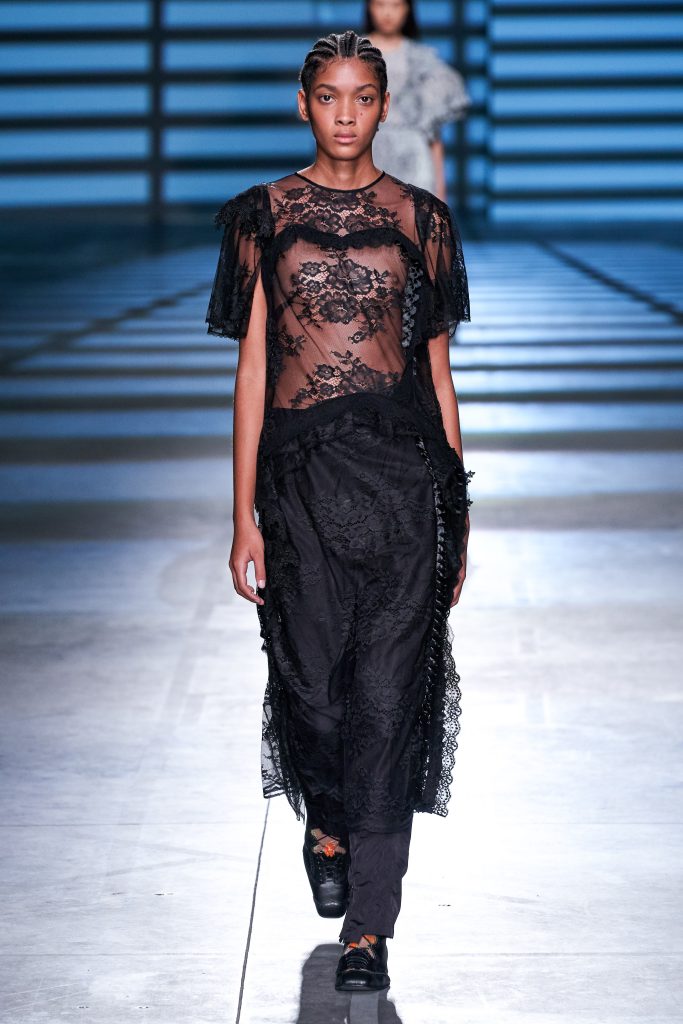 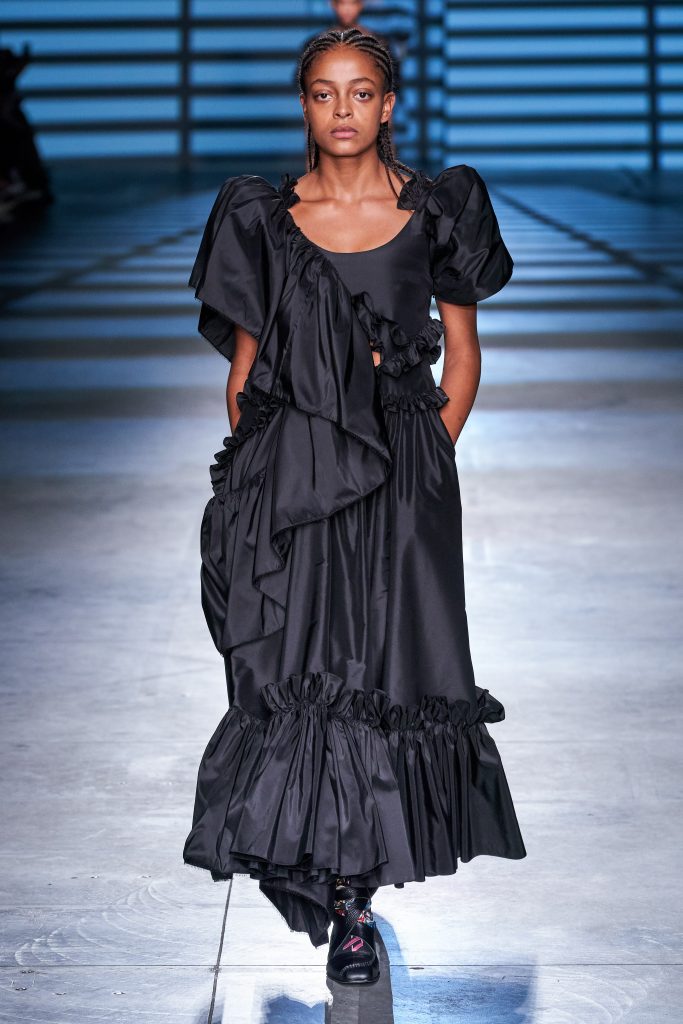 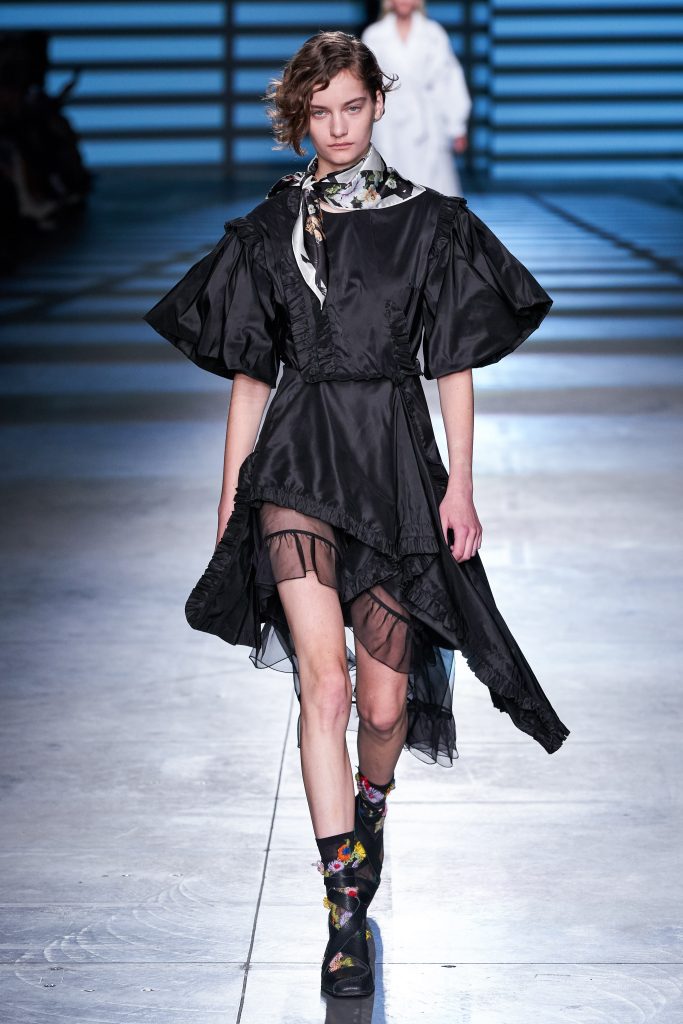 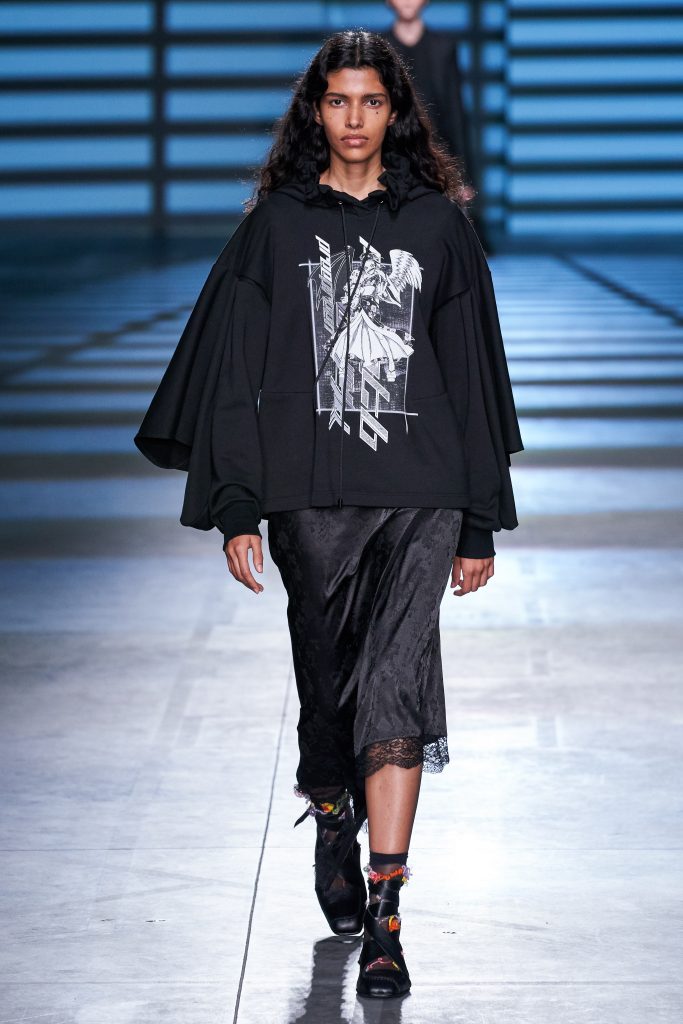 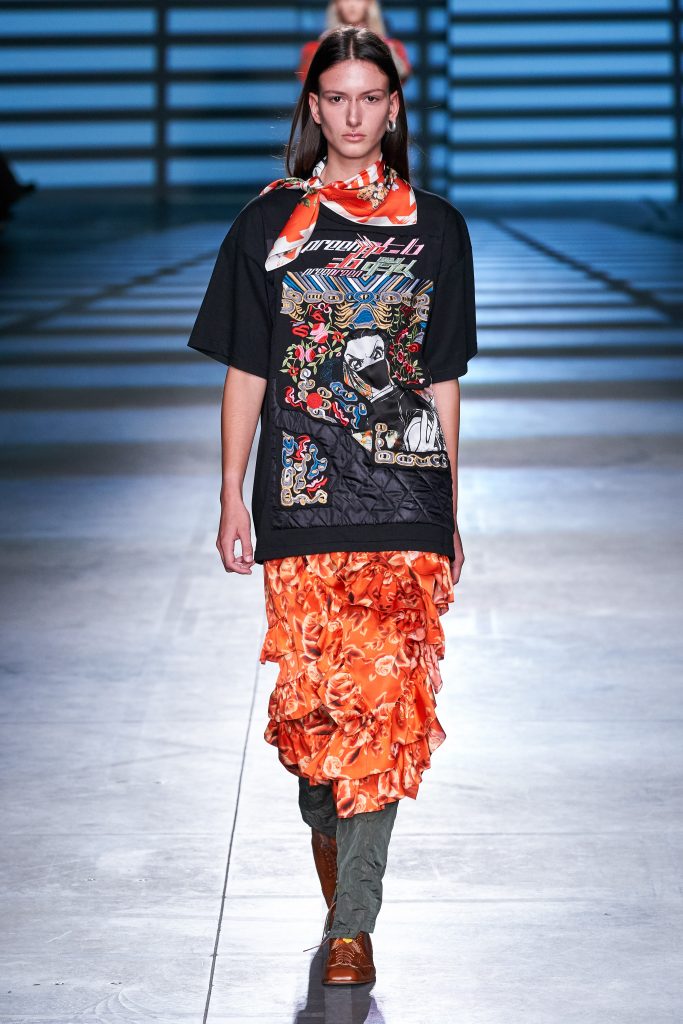 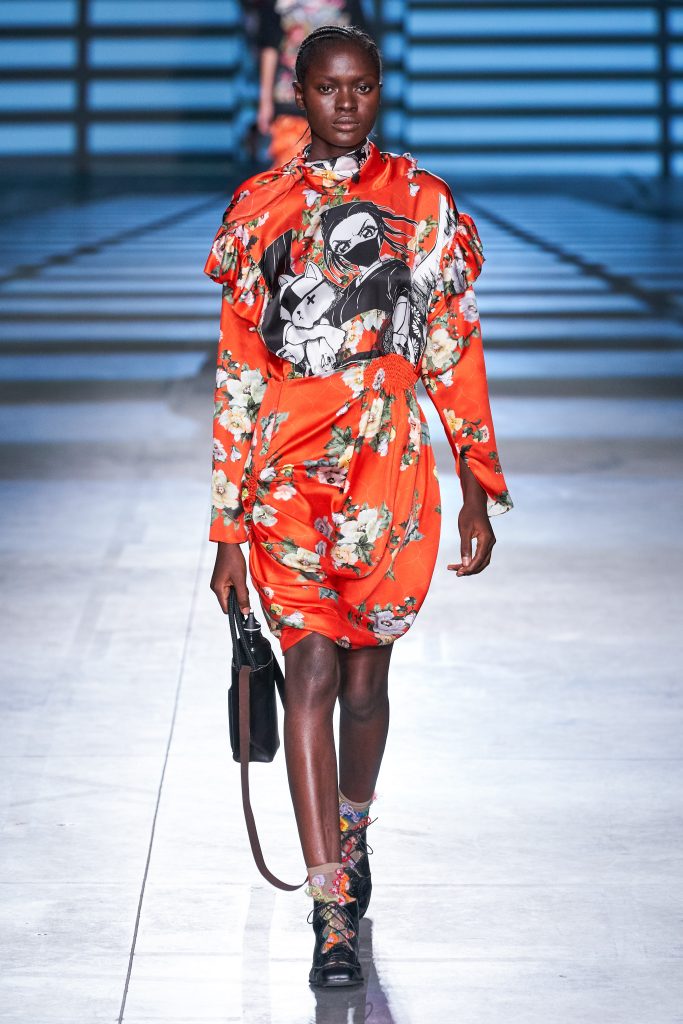 As part of London Fashion Week, founder of eponymous label SOBOYE Samson Soboye presented his Afro Luxe SS20 women’s and menswear collection. Named Ashanti after the region in south Ghana, which not only was the inspiration but the origin of the silk and cotton fabric made of interwoven cloth strips known as Kente, it was a display of contemporary elegance and a celebration of craftsmanship, dazzling colours and exquisite patterns and prints. Kente print Afrikomo dresses and duchess satin coats with matching bracelets were amongst the pieces that prompted gasps from guests.
As with Soboye’s distinctive personal style, his sartorial and soft furnishings designs are notable for their exceptional attention to detail. In 1999 Soboye developed his love of craft-based products and interiors by starting his own label Samson Soboye Home Couture which comprised of cushions, throws and *must-have* bags using highly tactile textiles such as faux furs, Mongolian Lamb, butter-soft suedes and leathers. Since 2002 Soboye has occupied a retail outlet on Calvert Avenue, in London’s Shoreditch. At the time it was a rather lacklustre street, but being the trailblazer he is Soboye saw its potential and in the last few years it’s become a *go-to* destination populated by coveted brands and cool cafes. From the very beginning Soboye’s African fashion & lifestyle emporium supported both emerging and established African and Afro-Caribbean design talent and African luxury from the African Diaspora perspective. In 2015 Samson was appointed head stylist for African Fashion Week London (AFWL) and has been an established editorial stylist since his collegiate days at Central St. Martin’s School of Art in the early nineties. To wear SOBOYE is to wear resplendence with the knowledge in years to come it will still be gloriously modern. 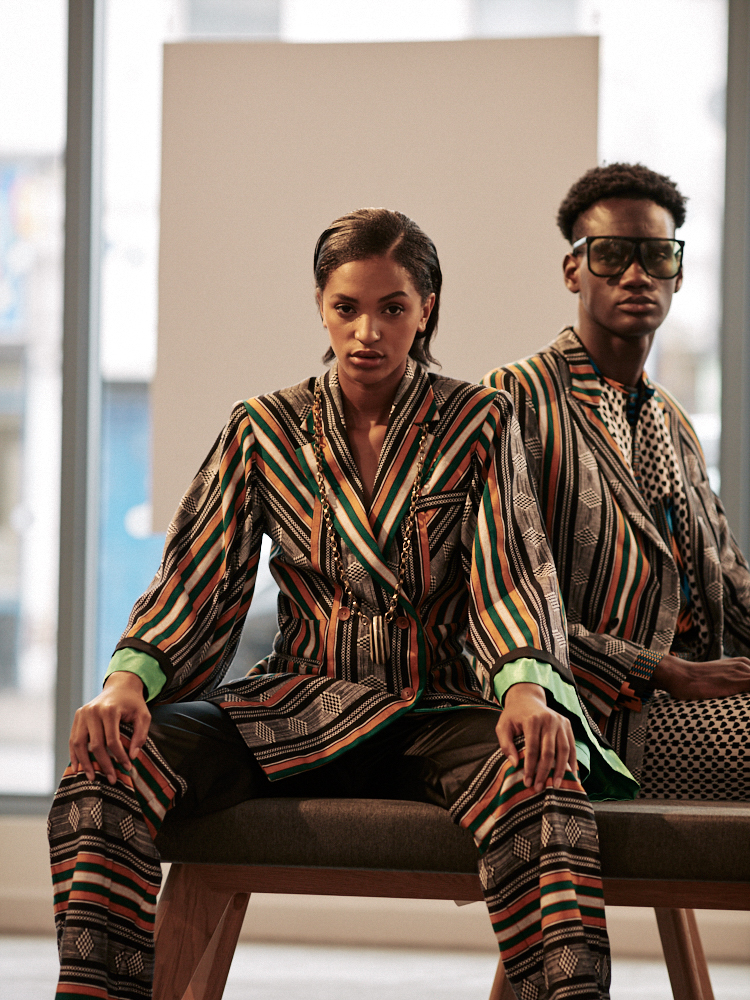 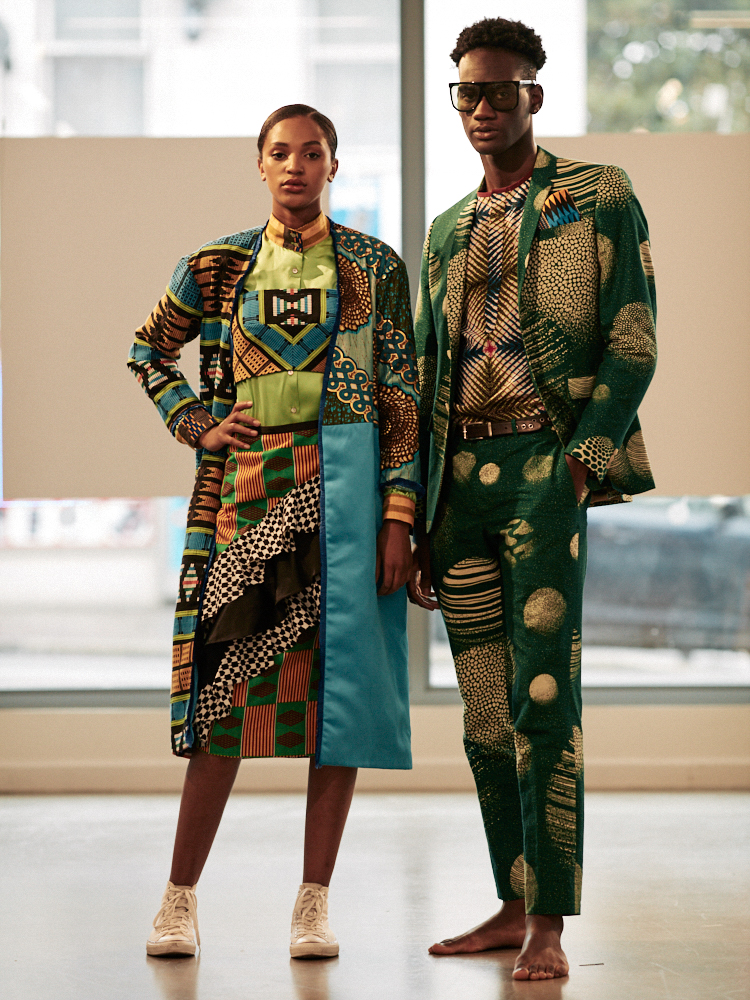 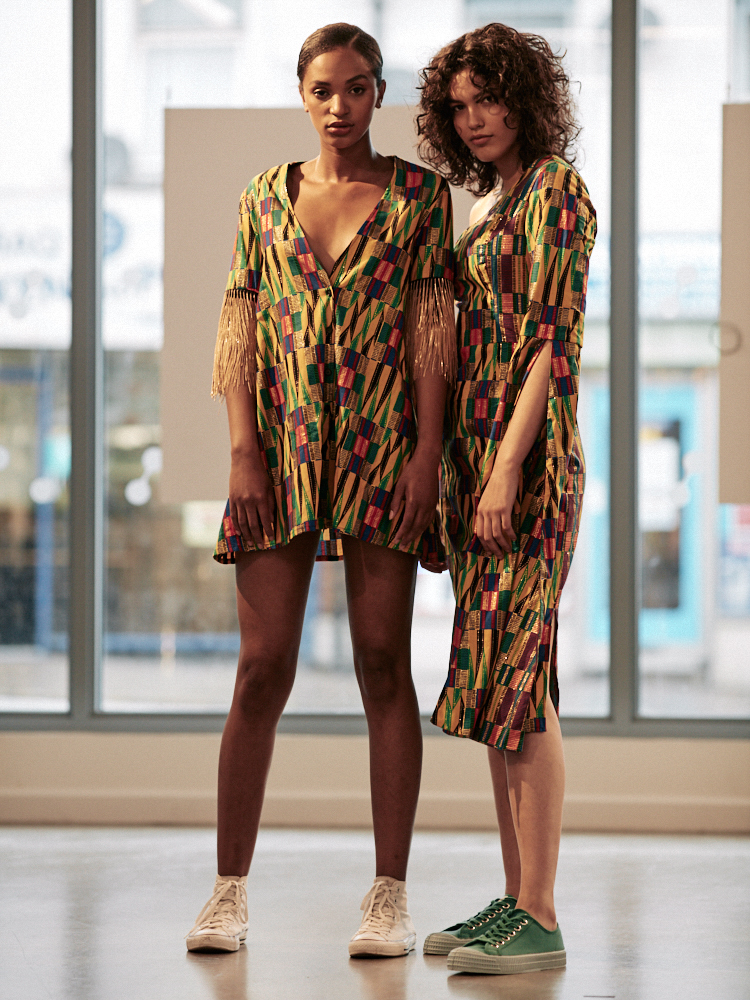 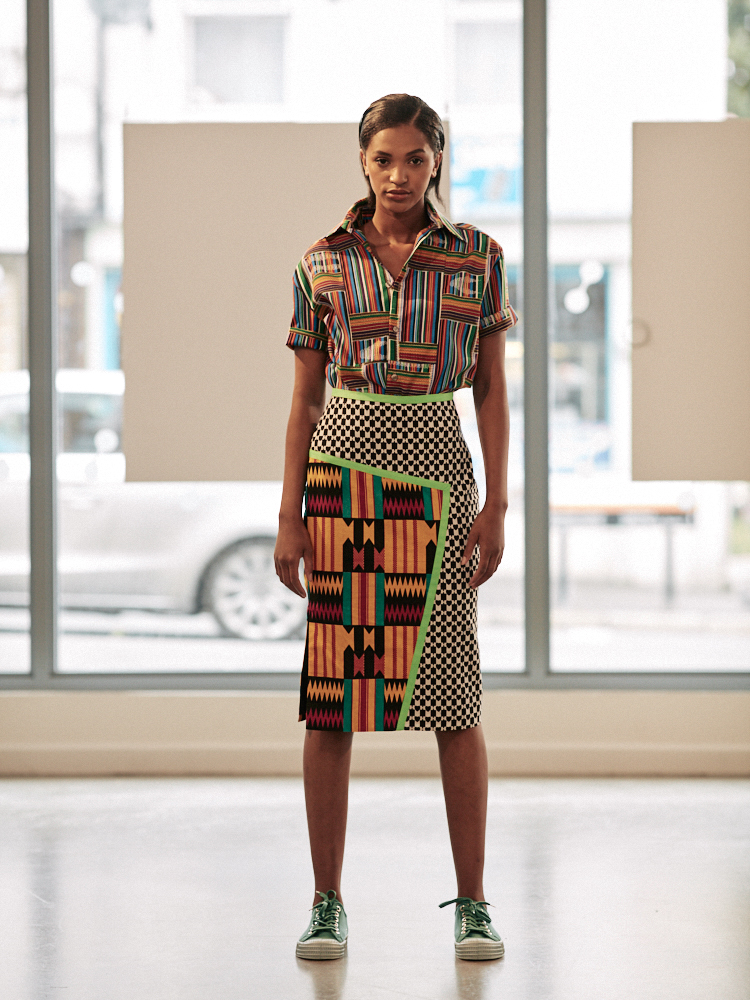 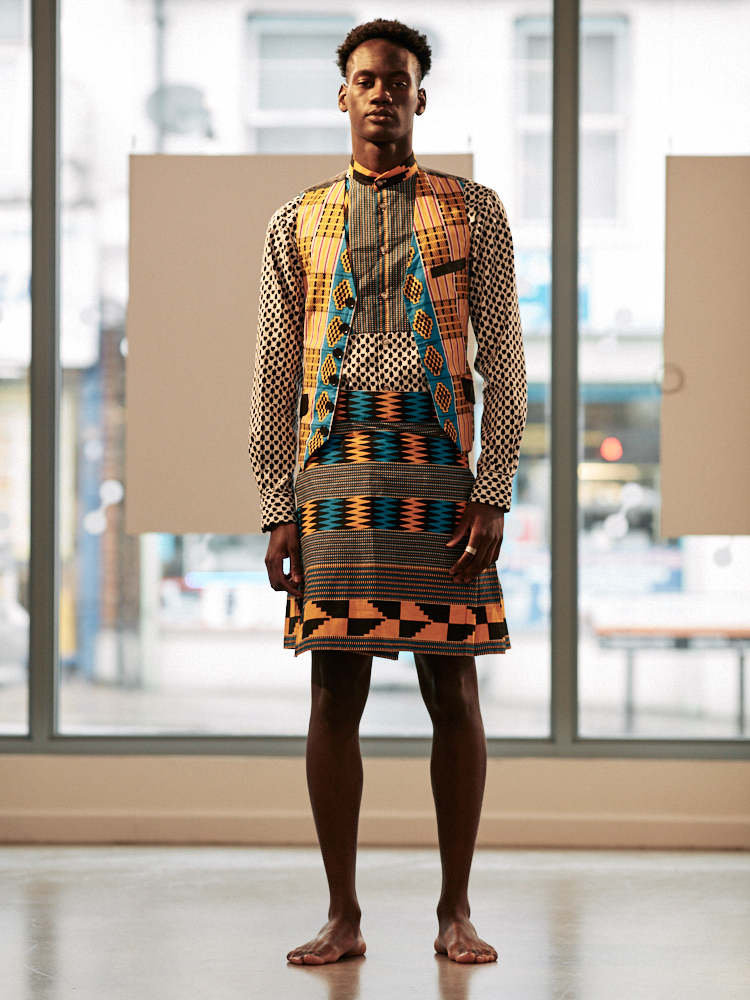 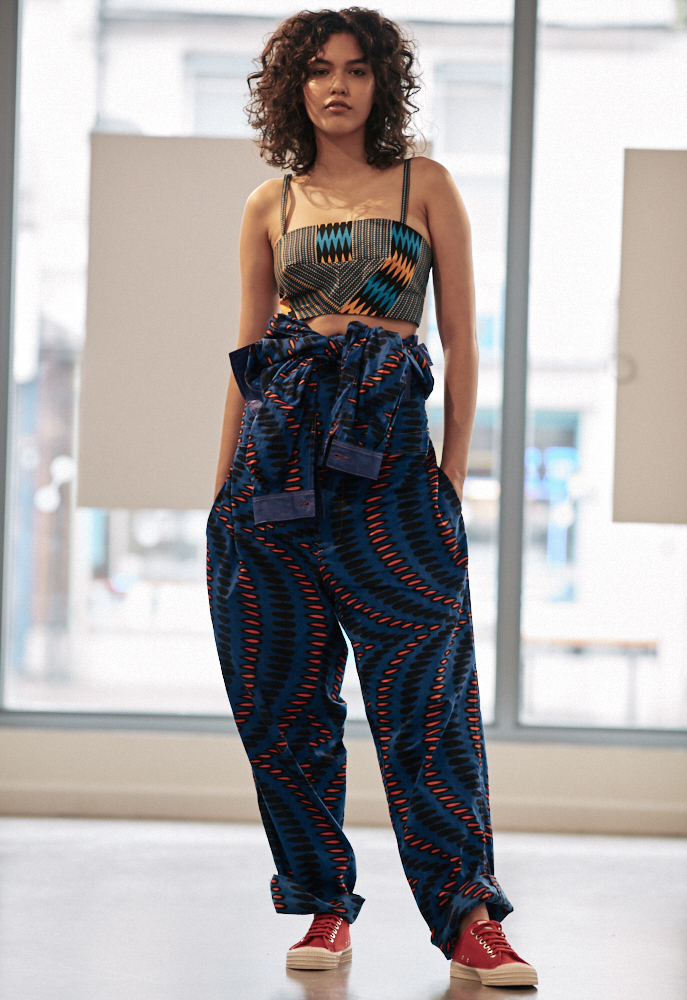