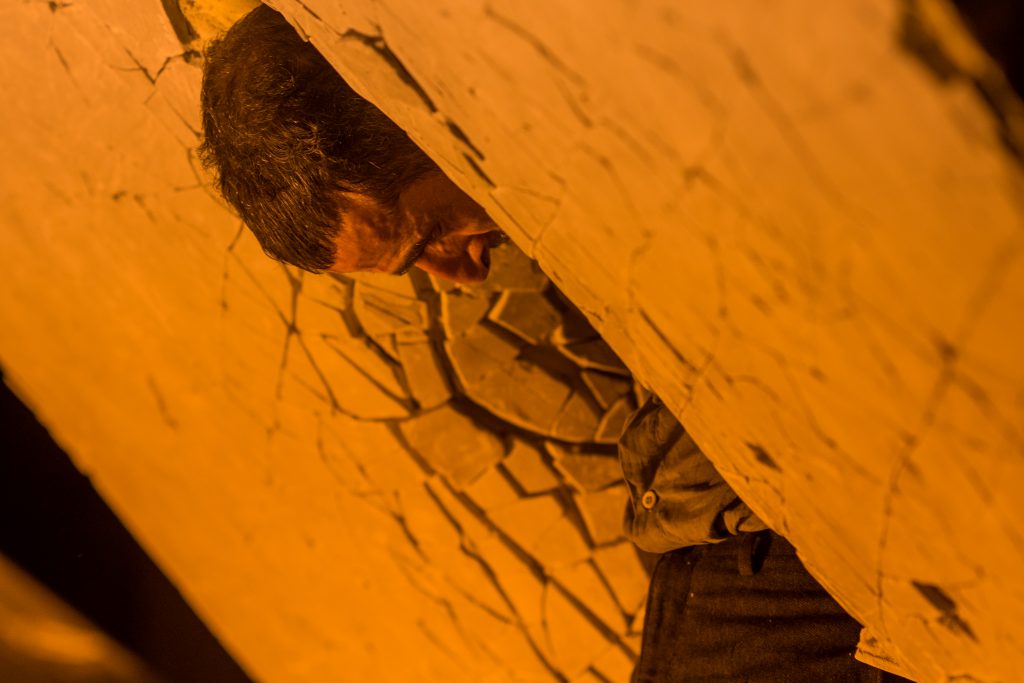 In Italy’s industrial heartland, an anguished cry from multi-disciplinary artist and choreographer Dimitris Papaioannou in a new performance piece that explores the struggle for meaning and our complex relationship with the material world.

Sisyphus / Trans / Form is a site specific performance commissioned by Collezione Maramotti, the private contemporary art collection (open to the public by appointment since 2007) housed in the brutalist former headquarters of fashion megabrand Max Mara, and is a collaboration with Fondazione I Teatri di Reggio Emilia. The piece, by the creator of the opening ceremony of the Athens Olympic Games, had its Italian debut in 5 performances over three days last month, and the collaboration will see the work presented in a new production for the Aperto Festival 2020, also in Reggio Emilia.

It is late in the evening when a small audience forms in one of the large galleries of the Collezione Maramotti. Against a wintry darkness, the only light comes from an industrial floor lamp, one of those used by builders, moved around by a smartly dressed gentleman who appears to control the performers. The collection is shrouded in industrial plastic, rendering the museum quality works of one of the world’s most interesting private collections equally obscured, the attractions they normally exert on us equally muted, and muted too, the support the art gives us in our own quest for meaning.

Against this backdrop a struggle plays out, as a man dressed in the dusty tailoring of a previous, more elegant existence staggers through the crowd under a weighty pile of bricks, before reappearing dragging a portion of wall behind him. With concrete and plaster flaking off with every effortful step, sweat pouring from him, the man pauses only long enough to accept water offered by the controller before returning compulsively to his wall, tending to its shards of flaked off plaster.

When in time the man is literally consumed by his wall, the staging of the piece is revealed as extraordinary, as a series of seemingly impossible vignettes are created with a physicality that impresses and astounds. The original, dust-covered man is replaced in his task by a woman who seizes her task, before being bowed down, as the man once was, by its weight and compulsive attractiveness. The work closes as the man attempts to build a new wall from flimsy plastic planks, contorting his body to hold the useless construction in place whilst the controller pulls away his clothing, debasing him effortlessly as his endeavours continue to fail.

Dimitris Papaioannou (b. 1964 in Athens) studied under Greek painter Yannis Tsarouchis and at the Athens School of Fine Arts before forming the Edafos Dance Theatre in 1986 as a vehicle for his original stage productions, hybrids of physical theatre, experimental dance, and performance art.
Originating in the underground scene, the company challenged perceptions and gained a growing number of followers. Medea (1993) marked the company’s transition to bigger theatres and is considered its iconic work. The Edafos company existed for seventeen years, until 2002, and left an indelible stamp on the Greek arts scene.
Papaioannou became widely known in 2004, as the creator of the opening and closing ceremonies for the Olympic Games in Athens. In 2015, he created the opening ceremony for the Baku 2015 European Games and in 2017, he created The Great Tamer, his first international co-commissioned work with ten co-producers, including the Festival d’Avignon. In 2018, Papaioannou became the first artist to create a new full-length work for Pina Bausch’s Tanztheater Wuppertal. Since She, dedicated to this great choreographer and dancer who died in 2009, premiered on 12 May 2018 in Germany.