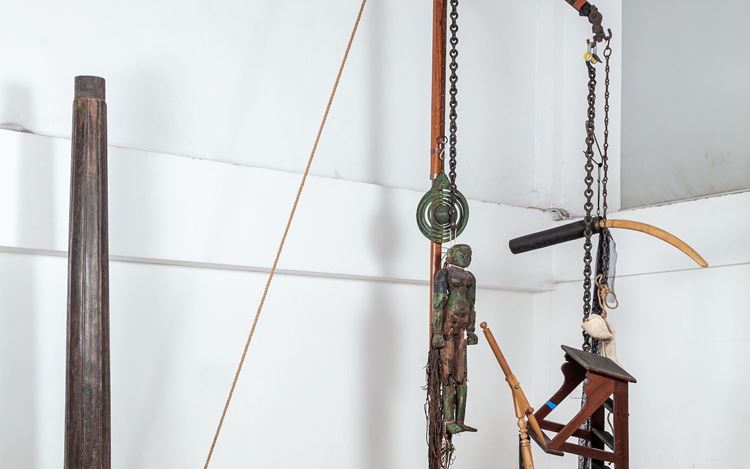 ‘A Wonderful Anarchy,’ is an exhibition of new work by Bharti Kher, following her three-month residency with Hauser & Wirth Somerset in 2017. This is the artist’s first solo exhibition at Hauser & Wirth Somerset and marks a return to the most elemental themes within her practice. Kher, who works across a multitude of forms, will present a body of sculpture, installation, and paintings. In the process of transforming found objects, and continually experimenting with materials, she layers references: to the mythological and scientific, secular and ritualistic, physical and psychological. At the center of all works is the abstraction of shape and confluence of time in a provocative meeting of materials. 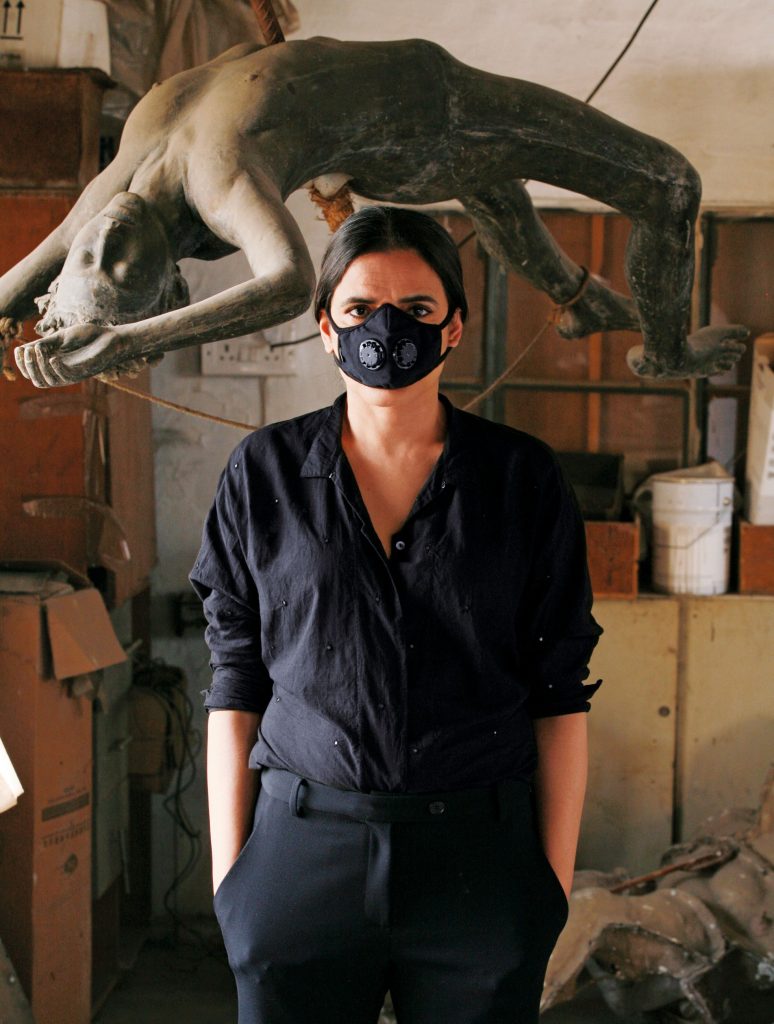 This act of making and creating sculpture is borne through the act of drawing. Kher will be the first artist to continue a residency in conjunction with their exhibition and will remain in Somerset until December. As visitors arrive at Hauser & Wirth Somerset, they will encounter the exhibition’s largest sculpture, ‘Halfwoman’ (2019), a monumental 3.5 metre cast bronze figure which was conceived from the artist’s series of smaller sculptures, ‘The intermediaries’ (2019). Like ‘The Intermediary Family’ (2018) that came before it and featured in Frieze Sculpture Park 2018, ‘Half-woman’ (2019) invokes themes of female multiplicity. This time however, Kher presents the potency of her goddess through negative space. She is hollowed-out, becoming a product of excavation, with an ornate half-circle exploding from her depths – a formalistic intervention of shapes that visitors will see recurring throughout the show. The sculpture was produced locally at the Morris Singer Foundry in Hampshire and developed during Kher’s first residency period in Somerset.

The exhibition continues into the Threshing Barn, where visitors see Kher exploring the notion of accretion in a style that goes beyond the idiosyncratic tendencies of a hobbyist collector, and into the intention of artmaking with the exhibition namesake – ‘A wonderful anarchy’ (2018). Acting as a dynamic counterpoint to the outdoor bronze, this new balance work brings together her vast curation of personal belongings, heirlooms, and found or collected pedestrian objects. Kher weaves this detritus of the studio in a manner so rapidly that she says the moment of making was ‘of synchronicity and rhyme.’ Dysfunctional staircases, yarns of wool, rusted urns, and the remnants of ominous black lace are pushed up against chains, scales, horns and hooks, even the most pristine of miniature figurines – suspending the domestic and the captive, in perfect stillness. The anchor of this supposed serenity is not just the ropes and pulleys, but also the pillar that stands at a distance from the entropy it holds together, representing a state of resilience and counterbalance in a world constantly in flux.

About the artist
Born in London in 1969, Bharti Kher’s art gives form to quotidian life and its daily rituals in a way that reassesses and transforms their meaning to yield an air of magical realism. Now living in New Delhi, India, her use of found objects is informed by her own position as an artist located between geographic and social milieus. Her way of working is exploratory: surveying, looking, collecting, and transforming, as she repositions the viewer’s relationship with the object and initiates a dialogue between metaphysical and material pursuits.

The bindi is an iconic personal affect of Indian women that is one of Kher’s signature materials and a loaded symbol. Since first appearing in her work in 1995, the bindi has inherited an aesthetic and cultural duality, a means to mix the superficial with the sublime. Kher explains: ‘Many people believe it’s a traditional symbol of marriage while others, in the West particularly, see it as a fashion accessory… But actually the bindi is meant to represent a third eye – one that forges a link between the real and the spiritual-conceptual worlds.’ Used as a material to articulate and animate her themes, bindis as such are not meant to be the central-motif of her work but rather act as a material, much like paint or clay, but with an inherent narrative. The bindis themselves undergo a shift in their initial cultural capital – they are defamiliarized, made to seem both scientific and mystical.

At the center of Kher’s practice are her sculptures, early examples of which featured fantastical hybrid characters, blurring the distinctions between humans and nature, ecology and politics. In line with this early practice, Kher continues to assemble, juxtapose and transform found objects that are witness to their own histories. Wooden wheels and architectural remnants, mannequin body casts and pillars all clash in mis-en-scenes of dystopia and grand orchestration. These elements are assembled in a hazardous manner; suspended from the ceiling, hanging from ropes, propped up and held from falling with the help of counterweights and balances; ultimately forming a heterogeneous narrative in which Kher further explores the artistic strategy of stripping objects of their meaning and making them open to misinterpretation and magic, creating alluring works of abstract beauty.