Back in 2003 I, along with 2 million other art lovers, was mesmerised by Olafur Eliasson’s Tate Modern Turbine Hall installation ‘The Weather Project’, and I remember lying on the floor basking in the glory of the artist’s artificial sun, surrounded by like-minded people reflected in the mirror above. It was a seminal moment for me and for contemporary art, when the exhibition’s unprecedented visitor figures proved that art has the power to provide a communal experience for an audience of all ages and demographics: an experiment that Tate Modern has successfully repeated since, with installations including the popular Carsten Holler ‘Test Site’ installation in 2007 which invited people to whizz down a giant slide, and more recently, Superflex’s vast art playground ‘One Two Three Swing!’ in 2017. 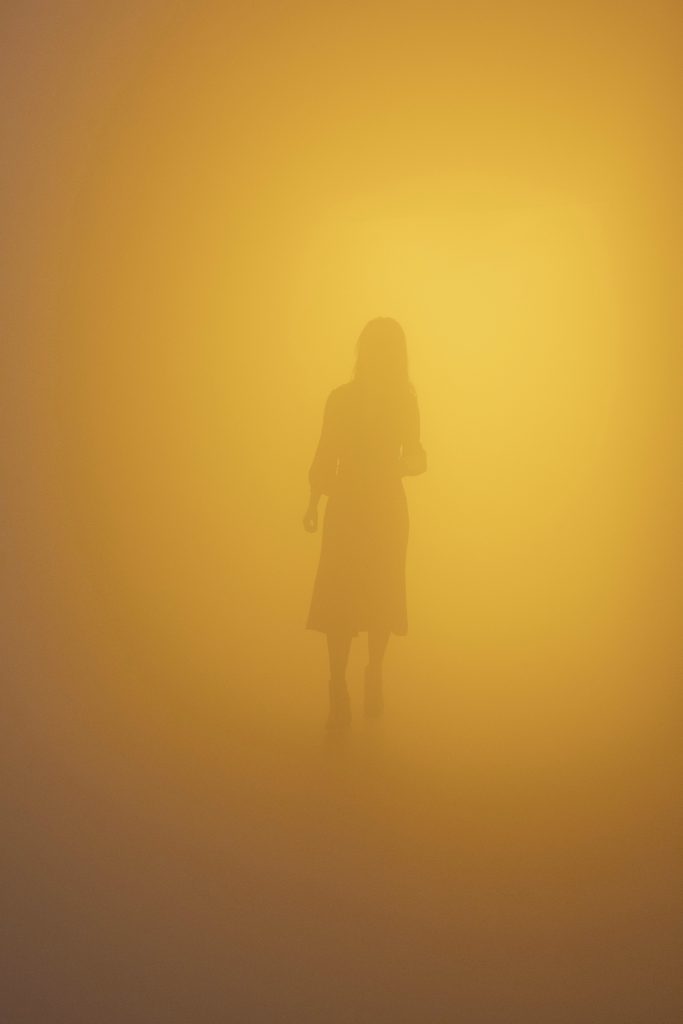 Sixteen years later and Danish-Icelandic artist Olafur Eliasson has an overdue retrospective at Tate Modern, eerily coinciding with the hottest European summer on record, when the Amazon up in flames, the Arctic is on fire and the ice is melting in Greenland. Despite some prominent climate change deniers in high office (that includes you President Trump), the overwhelming consensus is that our planet is heating up, and climate change is a clear and present danger.

Eliasson was examining the natural world and our relationship to it many years before the formation of Extinction Rebellion who are currently providing a mouthpiece for people who want to stop our less responsible actions from destroying the planet. In 2018 Eliasson transported ice from Greenland to London for the ‘Ice Watch’ exhibition, and now his major solo exhibition at Tate Modern gives an overview of how his artistic practice fuses an interest in phenomena of the natural world – such as rainbows, optical illusions and light refraction – with a deep knowledge of geometry, colour theory and architecture. 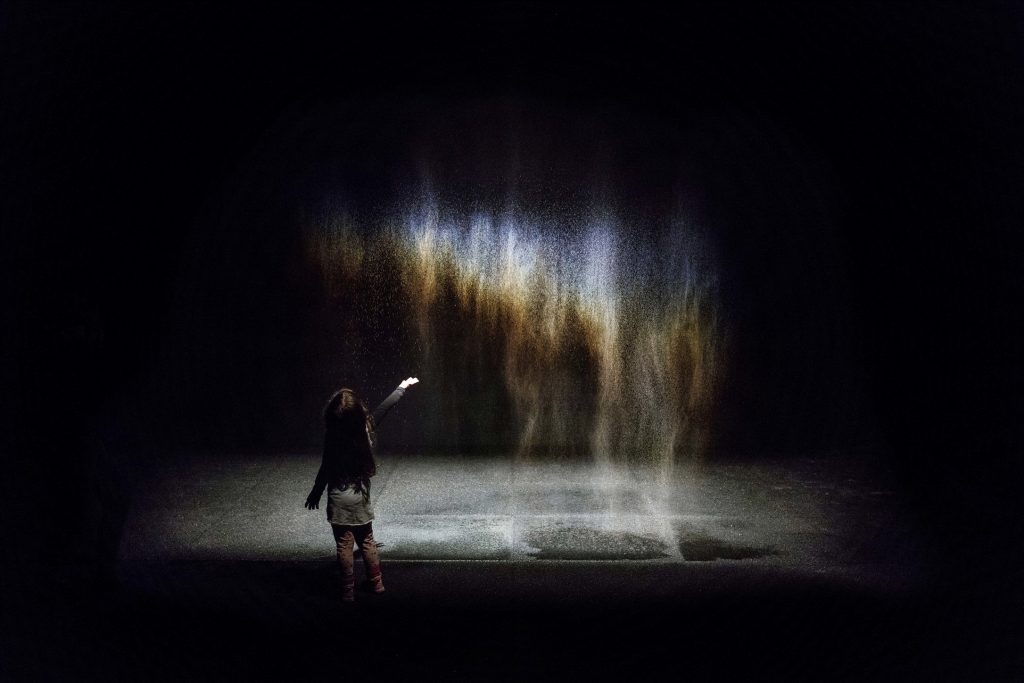 As well as democratising art and breaking down some of the out-dated stereotypes about contemporary art being accessible only to an elite few, Eliasson has harnessed the power of nature and science in his practice, enabling people to experience art with all 5 senses. His childhood in Iceland instilled in him a boundless interest in light, water and mist, natural phenomena that have informed his artistic practice. Key pieces in the Tate exhibition take inspiration from nature, including; ‘Moss Wall’ 1994, an 11 metre tall living installation; ‘Din Blinde Passager’ (Your Blind Passenger), 2010, which takes the visitor on an unsettling journey through a 39 metre long corridor filled with fog; and ‘Your Uncertain Shadow (colour)’ 2010, an immersive installation which invites visitors to project multi-coloured shapes onto the gallery wall with their bodies.

The exhibition is curated by Tate Modern’s Senior Curator of International Art Mark Godfrey with Assistant Curator Emma Lewis, and brings together more than 40 works spanning a period of 3 decades, beginning on the terrace of Tate Modern with an 11 metre tall installation titled ‘Waterfall’, 2019.

Eliasson’s oeuvre possesses a decidedly magical quality, and some of that magic is exposed in ‘The Expanded Studio’, a section of the exhibition that offers insights into the complex planning and mathematical calculations that go into each artwork and installation, almost like Houdini giving away the secret to his Water Torture cell trick. Featured in ‘The Expanded Studio’ is ‘Little Sun’, an initiative conceived by Eliasson to provide solar-powered lamps to communities around the world without electricity, and ‘Green Light – An artistic workshop’, uniting refugees and asylum seekers with members of the public. This exhibition is an essential one not only for art lovers, but anyone who loves our planet and the people who inhabit it.

Olafur Eliasson ‘In Real Life’ is at Tate Modern until 5 January 2020: https://www.tate.org.uk/whats-on/tate-modern/exhibition/olafur-eliasson 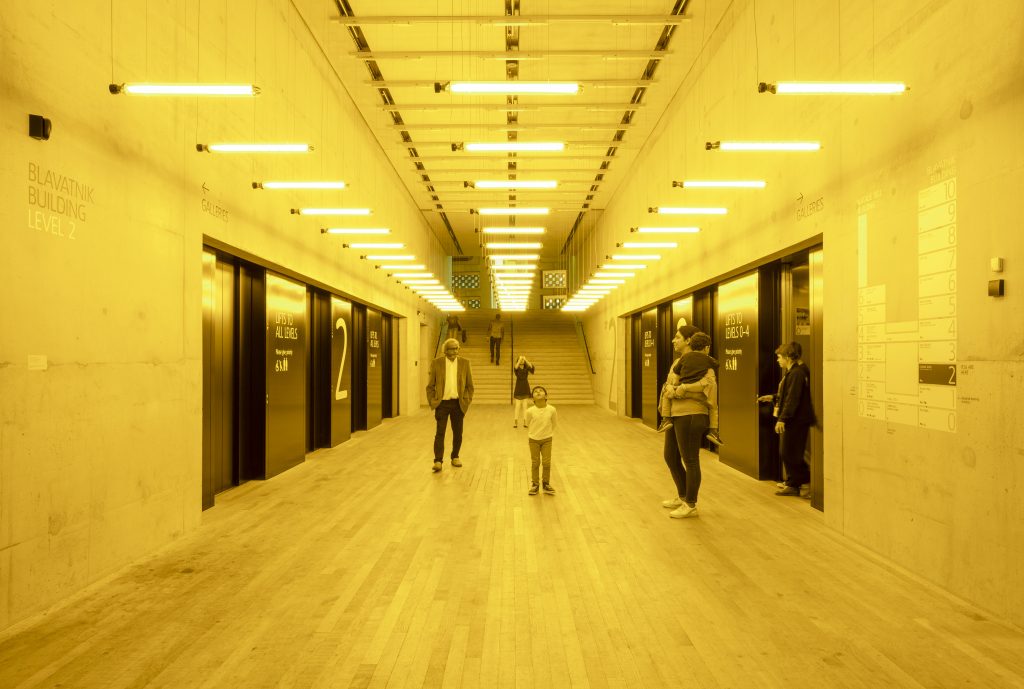