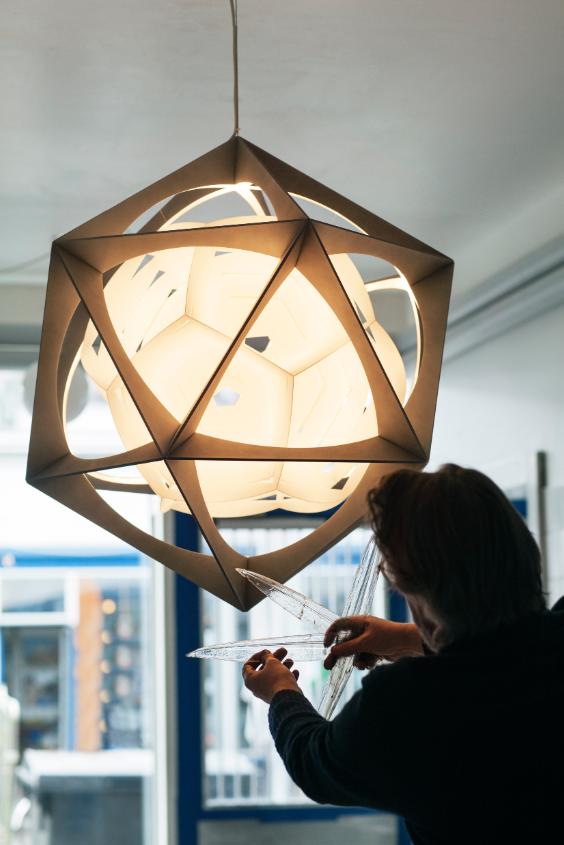 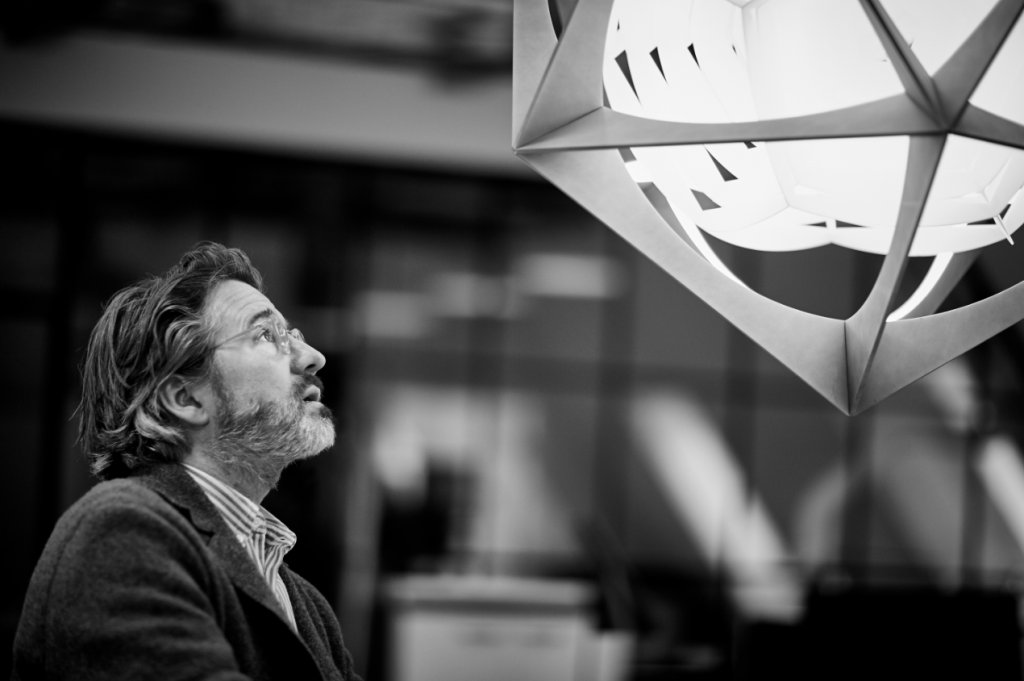 The lighting fixture is composed of two contrasting geometric shapes, nested inside each other. The outer layer, a rigid aluminium frame, is in the shape of an icosahedron (a form consisting of 20 faces and 12 vertices). The inner layer, in the shape of a dodecahedron (a form featuring 12 faces and 20 vertices), seemingly floats inside of the icosahedron, reflecting the light in a spherical distribution.
Bright LED lights are embedded at the vertices of the aluminium icosahedron, directing the light toward the lamp’s core: a white, inset pentagonal laminae made of polycarbonate. The light’s complex geometric shape is perceived differently depending on where the observer stands, creating endless interpretations and perspectives.

“I’m very excited to bring my longtime interest in geometry and light into this collaboration with Louis Poulsen to create the OE Quasi Light. What distinguishes it from so many lamps is that it shines in toward the core, from which the light is reflected back out onto the surroundings. In one form, the lamp combines precision in design with quality atmospheric lighting,”

Eliasson’s interest in polyhedrons, spheres, and curves – the ongoing geometric investigations he has pursued for years with his studio team – stems from a desire to create alternatives to the dominant orthogonal thinking of modern architecture, art, and design, to find forms that can help counteract the numbing of our senses. This concern for the emotional and physical effects of our surroundings is at the core of the lamp that Eliasson has conceived for Louis Poulsen. Louis Poulsen has been dedicated to creating lighting fixtures that are harmonious within their surroundings and have a positive effect on the viewer. Together with Eliasson, they have created a product that demonstrates how good light creates a good life.

An integral element in OE Quasi Light is its sustainability. The aluminium used is 90% recycled, while the other materials are entirely recyclable and reusable. With the design enabling future disassembly to replace and recycle parts, OE Quasi Light was created with longevity in mind.

About The Artist
Artist Olafur Eliasson (Iceland/Denmark), born in 1967, works in a wide range of media, including installation, painting, sculpture, photography, and film. Since 1997, his solo shows have appeared in major museums around the world. As part of his practice, he engages with arts education, policy-making, and issues related to sustainability and climate change. Eliasson’s projects in public spaces include The New York City Waterfalls, 2008; Your Rainbow Panorama, 2006–11; Ice Watch, 2014; and Fjordenhus, Vejle, 2018. In 2012, Eliasson founded the social business, Little Sun, which produces solar lamps for off-grid communities. In 2014, he and architect Sebastian Behmann founded Studio Other Spaces, an office for art and architecture. olafureliasson.net

About Louis Poulsen
Founded in 1874, Danish lighting manufacturer Louis Poulsen creates products that encompass the duality of design and light. Every detail in the design has a purpose. Every design starts and ends with light. Louis Poulsen offers a range of lighting aimed at the commercial and domestic lighting markets, with lighting fixtures and solutions for both indoor and outdoor applications. In close partnership with designers and architects like Poul Henningsen, Arne Jacobsen, Verner Panton, Øivind Slaatto, Alfred Homann, Oki Sato, and GamFratesi, Louis Poulsen has established itself as one of the world’s key suppliers of architectural and decorative lighting. The company has a global presence with dedicated showrooms in Copenhagen, Stockholm, Singapore, Miami, Oslo, Los Angeles, Tokyo, and Dusseldorf. louispoulsen.com