More Land Than Landscape is a solo exhibition of Frank Bowling OBE RA’s most recent paintings at Hales gallery. The exhibition coincides with Bowling’s five star major retrospective at Tate Britain which celebrates his sixty-year career, which opened on Friday 31st May and runs till 26th August 2019. 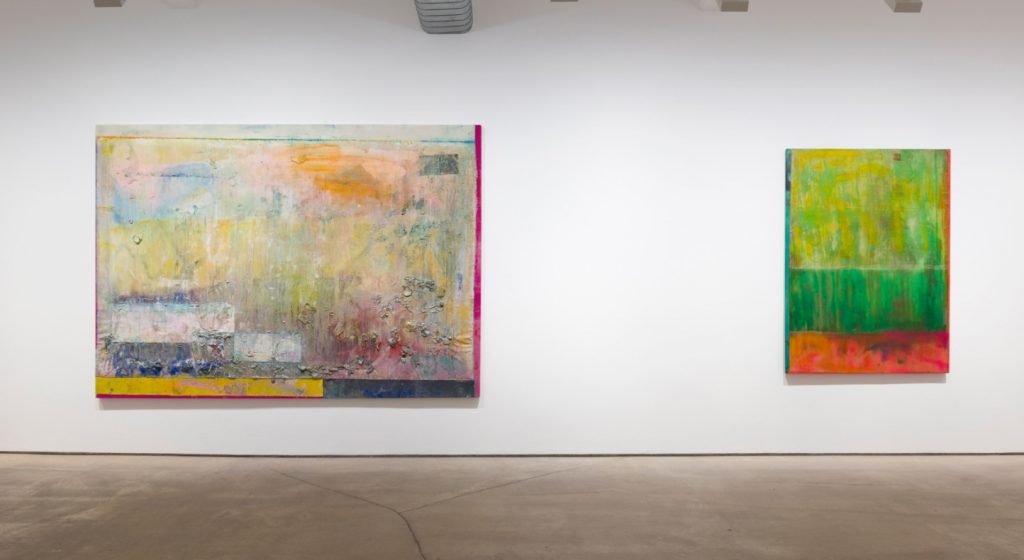 Frank Bowling OBE RA (b. Guyana, 1934) moved to London in 1953, where his artistic career started shortly after his arrival at the Royal College of Art (1959 – 62). Bowling began as a figurative painter incorporating personal and political subject matter, before moving to New York in 1966, where he made a decisive turn towards abstraction. In this career-defining moment, he developed a process-based practice – initially one committed to formalism, exploring the nature and possibilities of paint. Through his monumental colour field paintings, he cemented himself in the competitive New York scene.

Whilst Bowling erred towards a formal modernism, there has often been the suggestion of place in his work: in the delineated maps and stencils of his mother’s house; or in his titles referring to Bartica, Kaieteur, the Thames and his various studio spaces. Throughout an extensive practice, Bowling has retained a keen awareness of art historical context, starting with a rigorous education at the Royal College of Art and poring over masterpieces in the National Gallery, to engaging with the giants of American abstract expressionism. Formally abstract, Bowling’s paintings only ever hint at place, allowing the viewer to create their own connections and associations. 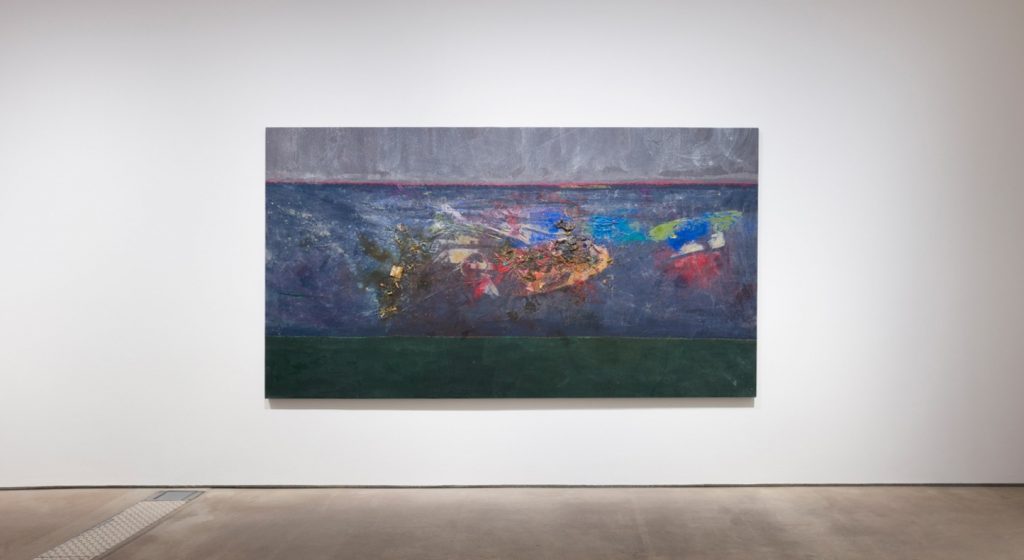 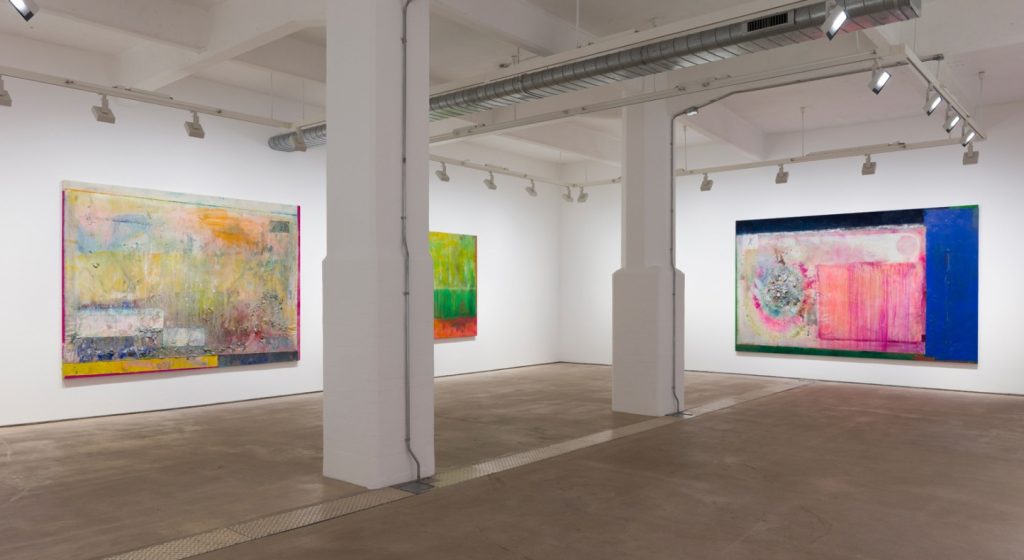 “The English landscape tradition is a rich vein that I could keep ploughing but I don’t want to make [copies of] Constables, I want to make new works that have a spirit and richness.”

The exhibition at Hales London takes its title from Bowling’s 2017 painting More Land than Landscape, which is how Dennis de Caires (friend and fellow Guyanese born artist) pertinently described the artist’s oeuvre in 1986. [2] Characteristic of Bowling’s titling, the artist includes snippets from his personal world, weaving memory and experience with illusory narrative. Poetic and often elusive, the titles act almost as a diary for the artist, helping him to recall the time of making the work.

The complex and engaging paintings in More Land than Landscape have all been made in the last year. Now 85, Frank Bowling draws on a sixty-year practice and continues to push the boundaries of paint – revisiting past formal devices, such as pouring, staining, stencilling and collaging canvas. Due to changes in his physical ability, Bowling relies on the assistance of family and friends to help with the process of making these works. The artist closely directs and guides his assistants, who follow his instructions with agility – he is grateful for the ‘nimble people’ who act as new tools in making paintings. [3] Still in the studio every day, Bowling never stops thinking about making work, stating:

“I don’t ever stop painting in my mind. When I am in bed, unable to sleep, I see paint moving across the ceiling and imagine it spilling and pouring as it flows through the nooks and crannies.”

In recent years, Bowling has been reflecting on the places that remain fixed in his mind and, in turn, the universalising experience of remembering. The abstractions are much like memories in that they are dreamlike – transcendental vivid colour is embedded with fragments of the real world. The paintings are ‘more land than landscape’ in that the material applied to the canvas undergoes a metamorphosis, pooled on to the surface and then dried with fan heaters, the paint cracks like scorched earth. Paint buckets used to weigh down canvas on the studio floor are peeled off to reveal celestial orbs. Deep stains and washes of reflective colour are reminiscent of watery depths. Sparkling surfaces evoke inner light and hazy, rippling heat. Decay is suggested through encrusted layering and the detriment of plastic is highlighted in the objects accrued on the painting’s surface.

In each painting, Bowling is aiming to create something new, navigating the pictorial space, searching for an essential truth. He has likened this process to looking for the horizon and often uses the simple device of a singular line to split the picture plane or a stratum of multiple lines of stacked colour. More than his preoccupation with the legacy of Barnett Newman’s ‘zips,’ the abstractions activate the viewer’s own associations, experience and memories. 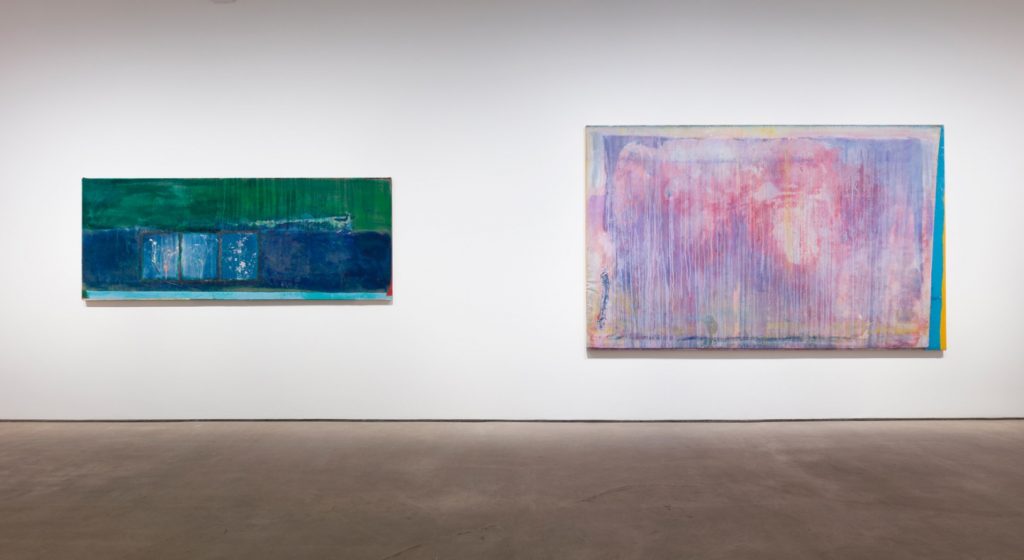 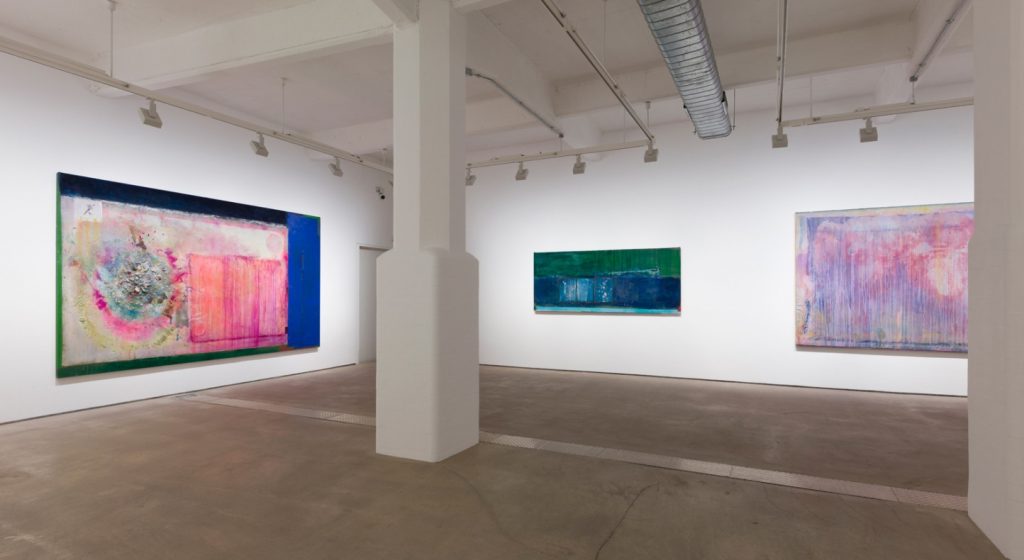 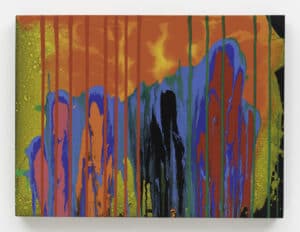