Paola Pivi : We Are The Baby Gang - FAD Magazine
Skip to content

This will be Paola Pivi’s ninth solo exhibition with Perrotin. Paolo returns to New York, 6 years after her last solo show which marked the inauguration of Perrotin New York on Madison Avenue, and following her successful solo show at Bass Museum Miami this winter. 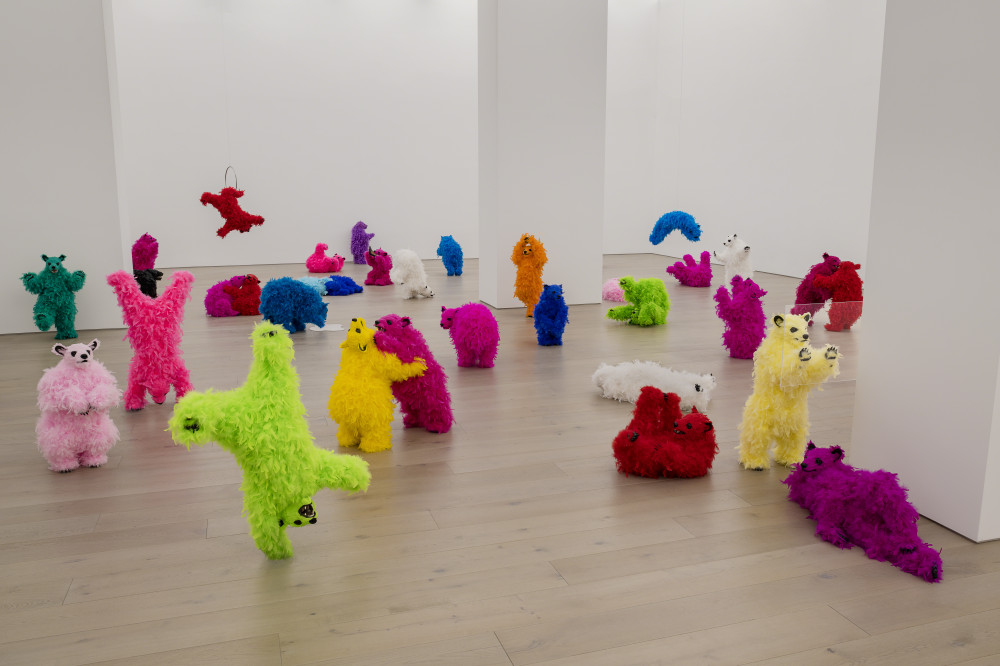 Seventy baby polar bears frolic, play, fight, nap, and explore the top floor of Perrotin New York. Instead of fur, the bears have sprouted florescent feathers. The polar ice caps are melting. In order to survive a changing climate, they have needed to adapt. They occupy a space between fantasy and reality—frozen in their stances, yet with the impression that they could spring to life at any moment. Paola Pivi originally began making full scale multicolored feather-covered bears while she lived in India. The country’s vibrant visual culture and kaleidoscopic color palette manifest in this work. Pivi had previously lived in Alaska. Her chosen home and an environment with a minimalist color palette and home to mythic animals. Much of Pivi’s oeuvre rejects geospecificity in favor of hybridity. Here she recast the planet’s biggest land-based carnivores as luminous otherworldly feathered creatures.

Pivi’s body of work is deeply personal and enigmatic. She drops hints like bread crumbs, allowing the viewer to establish their own understandings and interpretation. The commingling of the familiar and the alien are a common calling card of Pivi’s practice. She allows space for mutable meaning depending on context, personal experience, and contemporary news cycles. Animals are cast as protagonists in Pivi’s world. She draws upon their perceived characteristics and instills them with human mannerisms. Some of her best-known imagery includes a donkey traveling by boat, numerous bowls of gold fish seated in an airplane, and zebras frolicking in a frozen landscape. Her images are staged realities devoid of photoshop. Pivi’s bears are something other as they are invented hybrids cohabitating with humans. The full scale brightly-colored feathered bears practice yoga, hang from trapezes, and converse with one another. Pivi’s adult and baby bears embody the contradictions elemental to her artistic vision—they are simultaneously surreal and life-like, whimsical and intimidating, cuddly and imposing. Each artwork is created from a true to scale carved polyurethane form and laboriously hand-covered in fluorescent plumage. Dressed in flamingo pink and cobalt blue feathers, the bears evoke carnival costuming, haute couture, and burlesque in their opulent
plumage. In this show, two blue bears cuddle, an orange one bares her teeth as she scratches herself, and a pink bear rolls
around.

When laying out a tableau of Pivi’s bears for exhibition, placement is painstakingly considered. Social hierarchies and relationships are established in order to create a snapshot of authentic interaction. In putting together We are the baby gang, Pivi envisioned her baby bears as a landscape—a densely populated gallery where viewers could be enveloped by these creatures. They were conceived of as a pack. Each bear has an active name, “I need to improve my roar,” “Here comes my mom,” “I cannot wait to grow up.” Pivi instills them with personality through both title and by painstakingly dictating positioning. They are individuals even as they are part of the collective. The titles are self-aware, imbuing each baby bear with consciousness. They are learning and awkward at times in their stances having not quite yet figured out how to be. These creatures occupy a space oscillating between anger and pleasure, fear and elation. They have jaws that bite and claws that scratch yet still exude innocence. They are marked by their potential energy held in what would happen were they to come to life or were they to grown up. Like the majority of her work, We are the baby gang also draws from Pivi’s personal narrative. Specifically, the aesthetics of parenthood. She is inspired by miniaturized objects that began to populate her surroundings when her son came into her life— shoes fit in the palm of one’s hand, toys are the world made small and reimagined in electric tonalities. When Pivi became a mother the objects around her began to shrink in size to fit to needs of her son. She came to occupy the world in miniature.

Everything is made cute and precious. It is a constant reminder of precariousness and responsibility. Like a human child, the baby bears, even in their ferocity, need protection. In an Inuit story, a woman adopts a polar bear baby as her own child and in doing so breaks down the division between animal and human. The story, much like Pivi’s latest work, highlights the universal need to be protected and loved along with the responsibility and interconnectedness of all living things.

Pivi’s oeuvre is diverse, surprising, and ever evolving—often appearing to be the work of multiple creative minds. With ambitious and spectacular acts, as well as simple gestures, Pivi playfully appropriates cultural symbols, resulting in unexpected visuals that also appear familiar. In each work, subject and materiality are manipulated leading to surprising transformations. Pivi makes a space for where the impossible becomes possible and fiction enters the realm of the real. Justine Ludwig, March 2019

About The Artist
Paola Pivi was born in 1971 in Milan, Italy and lives and works in Anchorage, USA. Paola Pivi’s diverse work, spanning performances to sculptures to large installations, is punctuated over the years by her photographic representations of animals in performative happenings; these are her most renowned images. A long way from unicorns and other chimeras, the animals that appear in Paola Pivi’s world are very real. Yet, set in their strange surroundings, they appear as a dream within reality, imbuing them with a mythological aura (ostriches or a donkey sailing on a small boat in the Mediterranean Sea, 84 goldfish swimming in bowls and flying in a passenger airplane in New Zealand, different white animals grazing in an Edenic land, alligators frolicking in whipped cream in Florida or polar bears covered in multicolored feathers posing during the inauguration of Galerie Perrotin in New York). These images cast a new oneiric light over the world, viewed now through the prism of fantasy, of a fabulous bestiary. They appear to reveal a dimension that is a part of everyday life, which has only by chance never occurred before in front of someone’s eyes.