This summer Yorkshire Sculpture International (YSI) will present seven major sculptures by Damien Hirst as part of the inaugural edition of the festival taking place across Leeds and Wakefield from 22 June until 29 September 2019. Works will be shown outdoors in Leeds city centre, at Leeds Art Gallery and at Yorkshire Sculpture Park. 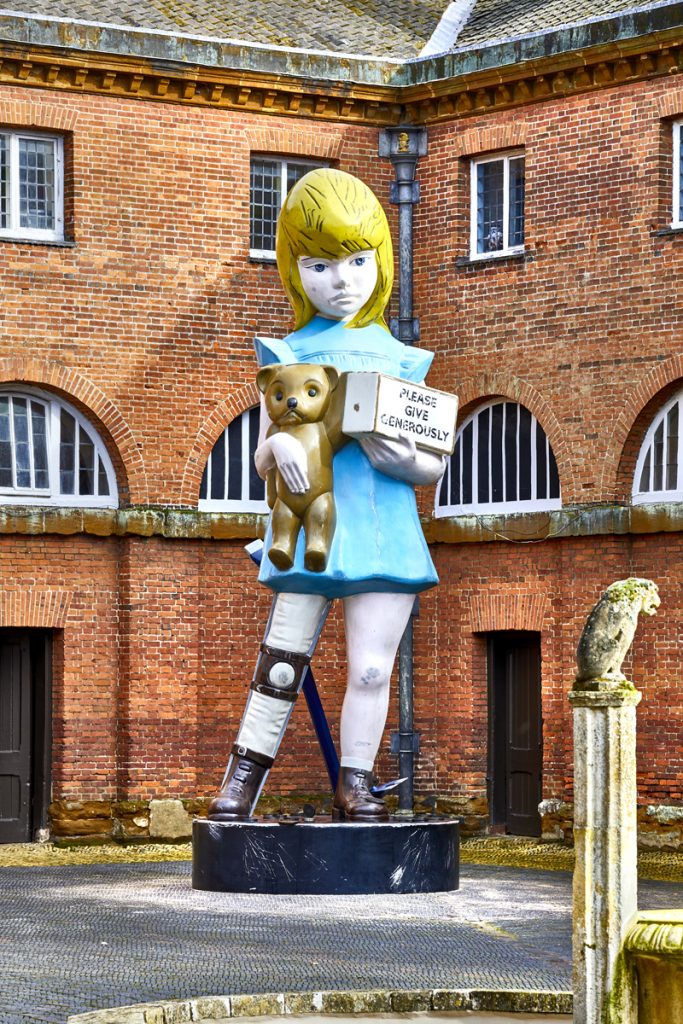 “I’m so happy to have my work in and around Leeds. When I was growing up in the city, the Leeds Art Gallery was my way into art. I never thought I’d ever be famous or considered important or anything like that, but seeing paintings by people like John Hoyland, Francis Bacon, Peter Blake and Eduardo Paolozzi – alongside the aquarium and natural history stuff in the City Museum – opened my mind to art. The things I saw made me so excited for what art could be. If people feel anything like that when they see my work, then that’s the greatest thing you can hope for as an artist, and it’s a double excitement for me that there’ll be sculptures in the town as well as the gallery. The giant bronze sculptures at YSP are where they belong – they’re just made for that setting. I used to hang out a lot on Ilkley Moor and Otley Chevin, and I will always love the Yorkshire landscape.”

The sculptures on display in the city centre will be positioned in well-known locations, making YSI a key part of the city experience in summer 2019. Standing at six metres high, the painted bronze sculpture Hymn is a monumental reinterpretation of an educational anatomical model intended for use by children, in which a cross-section reveals the internal organs of the male torso. Anatomy of an Angel, which will be on display in the Victoria Quarter arcade in the city centre, is a marble work which references classical sculpture. As in Hymn, The Virgin Mother and Myth, the vital organs beneath the skin are exposed. The display of the two works in Leeds city centre will be supported by Leeds Business Improvement District (LeedsBID) and Victoria Leeds.

Leeds Art Gallery will exhibit Hirst’s Black Sheep with Golden Horns in the historic Arnold and Marjorie Ziff Gallery. Part of Hirst’s iconic formaldehyde series, the work features a black sheep with golden horns, positioned within a steel-framed vitrine. This sculpture will be at the centre of the Ziff gallery display, in dialogue with the historic painting collection which covers the years 1888 to 1900.

At YSP, four sculptures will be placed in the newly revived 18th-century Deer Park and will be open to the public from 13 April. Hirst’s ten-metre tall The Virgin Mother will stand against the backdrop of the Lower Lake, a powerful presence in the landscape. Referencing the stance of Degas’s Little Dancer of Fourteen Years (c.1881) and considered a female counterpart to Hymn, the sculpture’s cross-section reveals the foetus curled within the womb.

Charity, on display near the recently opened Weston building, is recognisable as based on Scope collection boxes which were commonly seen on British high streets between the 1960s and 1970s. A young girl wearing a calliper forlornly cradles a teddy bear and a donations box which reads ‘please give generously’. The work questions historic and outdated ways of depicting disability and seeking charity.

Outside The Weston, Myth presents a white unicorn with half of its skin flayed to reveal vibrant red, pink and yellow musculature and tissues. Hirst often takes religious or mythical figures as his subjects, unpicking and disrupting their familiar narratives. Horses have been an artistic subject for millennia and, referencing this tradition, Hirst’s unicorn stands high on a classical plinth. Like all works in this display, Myth makes a playful nod to art history.

Back towards Lower Lake, The Hat Makes the Man is based on a 1920 collage of the same name by Surrealist artist Max Ernst. Ernst’s work is comprised of cut-out images of hats absurdly reassembled in stacks with intentionally phallic-like supports. It is thought to have been inspired by Sigmund Freud’s book The Joke and Its Relation to the Unconscious (1905), in which Freud describes the hat as a symbol of repressed male desire. Hirst renders Ernst’s work in three dimensions, using bronze casts of wooden pallets as supports and thereby introducing the idea of sculptural collage or assemblage. As with The Virgin Mother, Hirst’s materials are hidden. In the former works, the bronze is painted to emulate plastic and with The Hat the casting precisely imitates painted wood. The artist thereby plays with the grandeur associated with bronze.

Hirst was born in 1965 in Bristol and grew up in Leeds, attending Allerton Grange High School. He went on to study at Leeds College of Art (then Jacob Kramer College) in the early 1980s, as Barbara Hepworth and Henry Moore had done 60 years earlier. Hirst first came to public attention in 1988 when he conceived and curated the group exhibition ‘Freeze’, an exhibition of his own work and that of his fellow contemporaries at Goldsmiths’ College. Hirst has become widely recognised as one of the most influential artists of his generation. He was awarded the Turner Prize in 1995 and his outstanding contribution to British art was acknowledged in a major solo retrospective exhibited at Tate Modern, London in 2012. He has studios in Devon, Gloucester and London. This presentation of sculptures marks a return to the city after Hirst’s first solo exhibition in Yorkshire, the 2011 ‘Artist Rooms’ at Leeds Art Gallery, which attracted 11,000 visitors in its first week.

Yorkshire Sculpture International is a free festival of sculpture across Leeds and Wakefield
running from Saturday 22 June until 29 September 2019. Yorkshire Sculpture Park will open its Damien Hirst display, as part of YSI, on 13 April 2019

ABOUT YORKSHIRE SCULPTURE INTERNATIONAL
Yorkshire Sculpture International – a free, 100-day festival taking place across Yorkshire from 22 June until 29 September 2019 – will feature new public commissions in Leeds and Wakefield and a programme of events and exhibitions across the four world-renowned galleries that form Yorkshire Sculpture Triangle – Henry Moore Institute, Leeds Art Gallery, The Hepworth Wakefield and Yorkshire Sculpture Park.
The inaugural edition will be the UK’s largest dedicated sculpture festival and builds on Yorkshire’s rich history as the birthplace of pioneering sculptors, including Barbara Hepworth and Henry Moore, and as the home of this unique consortium of galleries and celebrated sculpture collections. Reflecting a provocation by British artist Phyllida Barlow that ‘sculpture is the most anthropological of the artforms’ the festival will respond to the idea that there is a basic human impulse to make and connect with objects. The programme will explore what it means to create sculpture today, around the globe, and in Yorkshire. Showcasing the breadth and diversity of contemporary sculpture practice, the artists participating in YSI
challenge what we understand as sculpture, making sense of the world and its political, environmental and social dimensions. The partner programme will feature 16 artists from 12 different countries.