Hugo Brazão has won the VIA Arts Prize 2018 (UK’s leading Ibero-American visual arts prize) Choosing from an immensely varied group of works, the panel of judges, formed by renowned professionals of the arts, chose a winner who they felt truly embodied and best elaborated upon this year’s theme ‘Dialogues’, whilst incorporating elements inspired by Latin American and Iberian culture, which the prize seeks to promote. 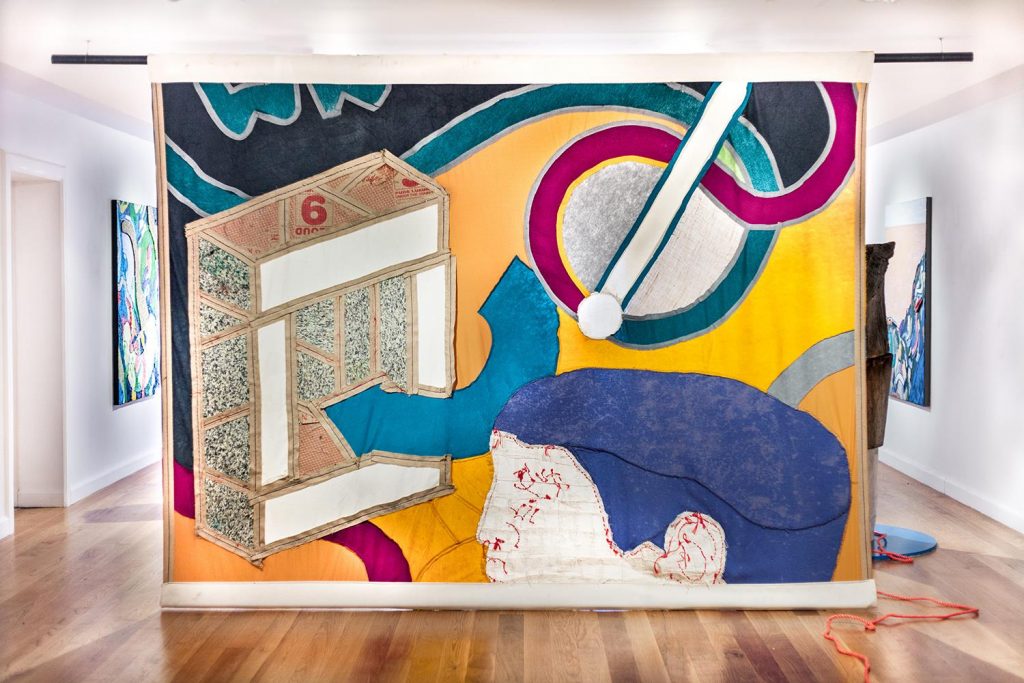 Portuguese artist Hugo Brazão won with his piece HIATO, which drew inspiration from a 3.9km tunnel connecting two areas of Madeira Island, Portugal. The large, multi-coloured tapestry advocates the creation of links and promotion of dialogues through the occupation of spaces. Carrying a rather timely statement in the current political scenario of post-truth, the piece highlights the importance of embracing complexity and connecting disparate ideas instead of avoiding problematisation, disguising conflicts and postponing the addressing of imminent problems.

Hugo Brazão’s work deals with the opposition between fiction and reality, and the importance of materiality in a world that is increasingly digital, virtual world. By repositioning or appropriating contemporary myths and fabricated realities, Brazão freely comments on themes such as hyperreality, contemporary politics, science scepticism, social contingencies and the present-day reliance on commodity.

The judges said of their reasons for selecting Brazão as the VIA Arts Prize 2018 winner:

“The artist questions a world where the boundaries between what is real and what is hyperreal are more blurred than ever. This quality, rooted in literary tradition in Latin culture, can be considered as unique in contemporary art practice.”

Hugo Brazão receives £5,000 as the 1st prize winner. The money is generously donated by VIA Arts Prize sponsors Itaú. This is the fourth year that Latin American bank Itaú has sponsored VIA in its various guises. Being able to do so in London, where their international business is based, further strengthens the link between Europe, Brazil and Latin America that is so important to their business and their long-term commitment to supporting the dissemination and appreciation of Brazilian and Latin American art and culture, both within and out with that region.

The VIA Arts Prize 2018 panel was comprised of seven respected art practitioners:

An exhibition of the top 30 shortlisted works will run alongside the exhibition Constructed Geometries, a series of sculptures and prints that draw on the iconic Brazilian neo-concrete movement by the winner of the VIA Arts Prize 2017, Susan Phillips.

There is also a People’s Choice Award for the visiting public’s favourite artwork. Visitors can vote in situ and results will be revealed at the end of the exhibition. www.viaartsprize.org
About The Artist
Hugo Brazão graduated from Central Saint Martins in 2015 and has had a solo exhibition at the Contemporary Art Museum of Madeira; his new show will open in 2019 at Las Palmas Projects in Lisbon. In 2017, Brazão was one of the Venice Arte Laguna Art Prize finalists.