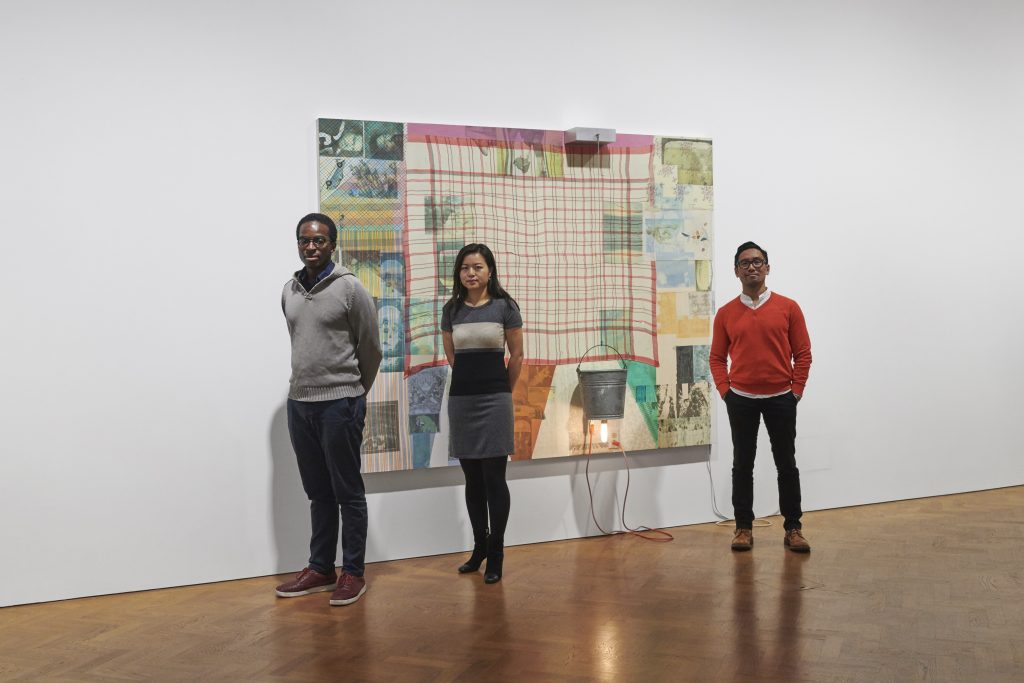 To coincide with the exhibition Robert Rauschenberg: Spreads 1975-83 and John Cage: Ryoanji, Galerie Thaddaeus Ropac and MusicArt present the world premiere of a musical performance inspired by Robert Rauschenberg’s collaborations with the pioneering avant-garde American composer John Cage. Co-created and performed by pianist Annie Yim with poet Kayo Chingonyi and composer Raymond Yiu, this Conceptual Concert in Three Acts is framed by the piano music of Cage, including The Seasons (1947) and Winter Music (1957), alongside an installation of sound and spoken dialogue. The final act of this cross-disciplinary concert is a staging of Cage’s iconic piece, 4’33” (1952). The performance multiplies artistic roles and dissolves boundaries in homage to Cage and Rauschenberg. Beyond their artworks on view at Galerie Thaddaeus Ropac London, the words of Cage and Rauschenberg too have inspired this concert-installation.

“The specially composed concert-installation inspired by the work of Rauschenberg and Cage focuses on dialogues – musical and spoken, historical and contemporary, space and time, visual and aural interactions. Intended to be cumulative and cyclical, this new composition comprises unexpected combinations of influences and traditions, uncovering themes in Rauschenberg’s Spreads that have been incorporated into our process. Fragments, memory and integration are motifs that resonate throughout the piece, while music and words are woven, layered and juxtaposed as highly structured sound events.”

“I recognize Rauschenberg as myself, as if we were the same person. We do not even have to explain things to one another…”

John Cage, quoted in Conversing with Cage by Richard Kostelanetz (1987)

Robert Rauschenberg was a prolific collaborator, inspired by the shared creative process of working with close friends, including the painters Jasper Johns and Cy Twombly, choreographer Merce Cunningham and composer Cage.

Conceptual Concert in Three Acts by MusicArt
Drawing inspiration from the art and life of John Cage and Robert Rauschenberg, MusicArt presents a concert-installation in three acts.

Act I – By Annie Yim
Live piano performance of Cage’s The Seasons (1947) and Winter Music (1957), combined with recorded extracts of Cage’s spoken voice during Interludes between Acts

Winter Music was dedicated to Rauschenberg and Jasper Johns, employing collage techniques and Cage’s influential notion of indeterminacy. The score indicates that the number of pianos to be used ranges from 1 to 20, in whole or in part, and the exact notes and length of the piece are determined by the performer(s).

A second performance will be staged at Galerie Thaddaeus Ropac Salzburg on 17 April 2019.
With special thanks to Edition Peters UK and The Poetry Society for their kind assistance to MusicArt.

About MusicArt
Founded in London in 2015 by pianist Annie Yim, MusicArt is a concept for creating and collaborating across art forms with music at the heart of each project. New works in visual arts, poetry, contemporary dance, and music have been commissioned and premiered at major art galleries and concert halls in London and Berlin. In 2017 MusicArt was invited to deliver a keynote address at an international, multidisciplinary conference at the University of Surrey by Annie Yim, in conjunction with artist Christopher Le Brun, President of the Royal Academy of Arts. Through new dialogues and performance installations, each artist-led project aims to explore shared aesthetics in unique historical and contemporary contexts. www.musicart.london

Kayo Chingonyi was born in Zambia and moved to the UK at the age of six. He is the author of Kumukanda, a poetry collection that won the 2018 Dylan Thomas Prize (“The world’s largest literary prize for authors under the age of 40 writing in English” – BBC). He is a fellow of the Complete Works programme for diversity and quality in British Poetry, and was an Associate Poet at the Institute of Contemporary Arts (ICA) in 2015. He is the founding editor of The Poetics of Grime, the current poetry editor for The White Review, and he has edited special issues of Magma Poetry and Poetry Review. He teaches, writes and produces music, organises and hosts poetry, music events and radio programmes, and DJs.

Annie Yim founded MusicArt in 2015 in London. Described by The Times as a pianist who “made the most beautiful sounds, radiantly coloured, thoughtfully articulated”, she was St John’s Smith Square Young Artist in Residence in 2016/17 and made her UK concerto debut at LSO St Luke’s. As founding member of the Minerva Piano Trio, she is currently Making Music Selected Artist 2018. She has broadcast live on BBC Radio 3, Classic FM, and national radios in Canada and Portugal, and her performances with artists and art spaces have been featured in New York T Magazine, Artnet, and Gramophone. Born in Hong Kong and brought up in Vancouver, she holds a Doctorate in Musical Arts for her performance-based research at the Guildhall School of Music and Drama, and City, University of London.

Raymond Yiu Hong-Kong born composer Raymond Yiu was the winner of the BASCA British Composer Award in 2010, with nominations in 2004, 2012, 2013 and 2018. He has worked with ensembles and artists including Lukas Foss, BBC Singers, Chroma, Ensemble 10/10, Nouvel Ensemble Moderne, Lontano and London Sinfonietta. The Original Chinese Conjuror was commissioned for the 2006 Aldeburgh Almeida Opera, while Maomao Yü was commissioned by LSO for Lang Lang and the Silk String Quartet. Following the premiere of his “hugely impressive” (The Guardian) Symphony at Proms 2015, The World Was Once All Miracle, commissioned for Manchester International Festival 2017, was nominated in the large-scale composition category of 2018 Royal Philharmonic Society Music Awards.