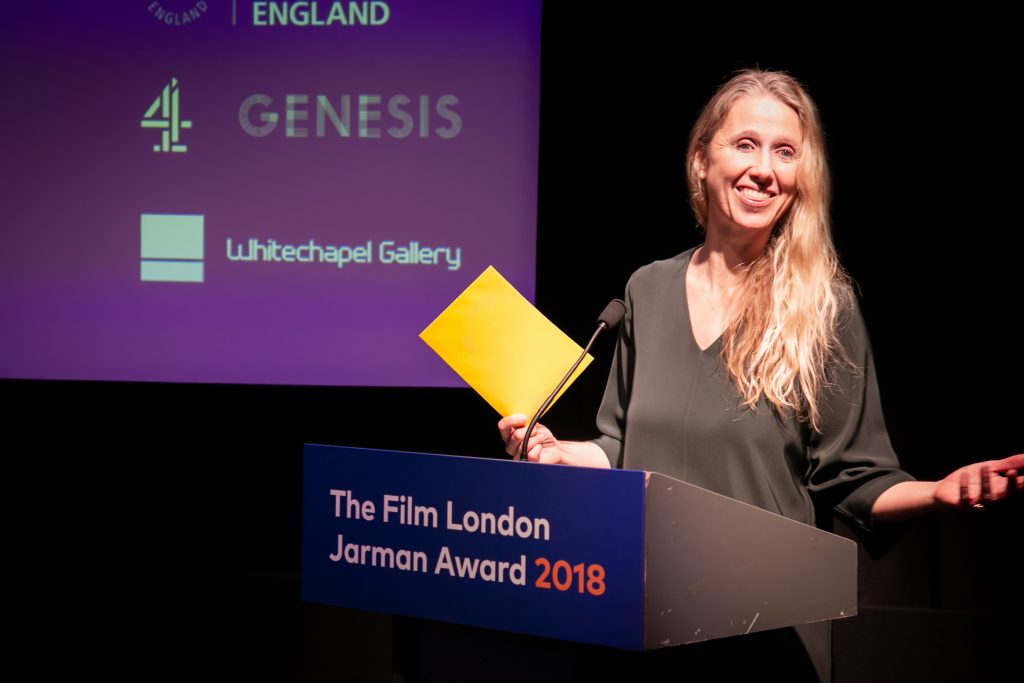 Daria Martin works across moving image and performance. Her enigmatic films mix the naturalistic with the surreal, creating multisensory spaces of the imagination. Her subject matter has ranged from her grandmother’s dream diaries to working with robots, choreographers and card magic. Her works are beautifully composed with an ethereal quality and an aesthetic that moves from cinema to 1960s instructional film. She has frequently worked in collaboration with scientists and has twice won Wellcome Trust awards.

In her 2017 work A Hunger Artist, Martin retells Kafka’s 1922 short story. Set in a fantastical Victorian fairground it is a macabre tale of a sideshow artist who joins the circus, and having performed for unappreciative and doubtful spectators, ends up dying neglected. Her work At The Threshold (2014 – 2015) is one of a series of films that explores the rare condition of mirror-touch synaesthesia. People with this neurological condition feel a palpable sensation of touch on their own bodies when they see another person, or even an object, being touched.

Daria Martin has shown work at the Tate Modern, Tate Britain, and The Wellcome Collection, London, and Stedelijk Museum, Amsterdam. She will be having a solo show at the Barbican Centre Curve Gallery in 2019.
Daria Martin was born in 1973 in San Francisco, USA and now lives in London. She has won numerous awards and her work is held in a number of public and private collections including Arts Council England, Museum of Contemporary Art, Chicago and the Whitney Museum, New York.

Daria Martin receives £10,000 prize money.
The 2018 Film London Jarman Award was presented by Olivia Laing. Olivia Laing is an acclaimed writer and journalist. In 2014 Laing received the Eccles British Library Writer Award and in 2018 she was awarded the Windham Campbell Prize for non-fiction.

“I am delighted that the 11th Film London Jarman Award will honour the work of Daria Martin, whose long-running practice has seen her constantly challenge herself, creating an eclectic and expansive body of work that has explored everything from dreams and mythology to technology and feminism. The past 11 years have seen a significant rise in audiences for artists’ filmmaking, and it is important to recognise Martin’s considerable contribution to this shift in the popularity and ubiquity of the medium.”

The Jarman Award, established in 2008, celebrates the diversity and creativity of artists working in film today, and is run in partnership with Whitechapel Gallery, Channel 4 and Genesis Cinema.

About The Artist
Primarily working with 16mm film, Daria Martin (b. 1973) creates highly constructed cinematic worlds in which human gesture is contrasted with mannered artifice to challenge the viewer’s habits of perception. Diverse subjects such as robots, dreams, synaesthesia and magic are considered within peculiar and isolated spaces, creating a sense of the slippages between the internal world and the external, and different levels of consciousness. dariamartin.com