Damien Hirst has officially unveiled his work ‘The Miraculous Journey’ (2005 – 2013) which consists of fourteen large-scale bronze sculptures that chart the gestation of a foetus from conception to birth. The colossal figures have been revealed outside the newish Sidra Medical and Research Centre in Doha.
Each sculpture ranges from 5 to 11 metres (16 to 36 feet) in height and the whole thing weighs a massive 216 metric tonnes. 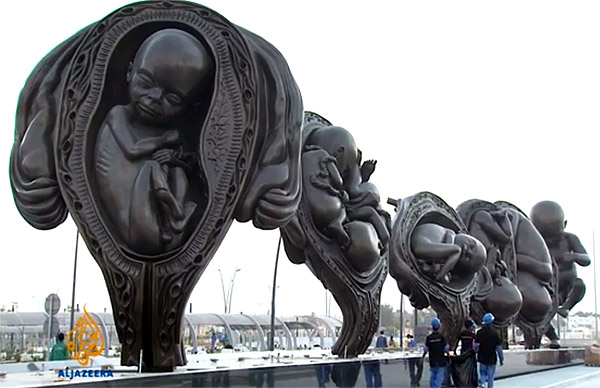 Hirst’s sculptures were commissioned for $20 million by art enthusiast and chairwoman of the Qatar Museums Authority, Sheikha al Mayassa Hamad bin Khalifa al-Thani as part of a set of cultural initiatives that “aim to redress the traditional boundaries between eastern and western art in the Middle East.”

The sculptures were actually unveiled in October 2013, but were reportedly covered up until the big reveal in October 2018. The official reason, reports AFP, was to protect the sculptures against damage from hospital construction, but the newswire noted that the statue had seen its fair share of social media discussion around its appearance.