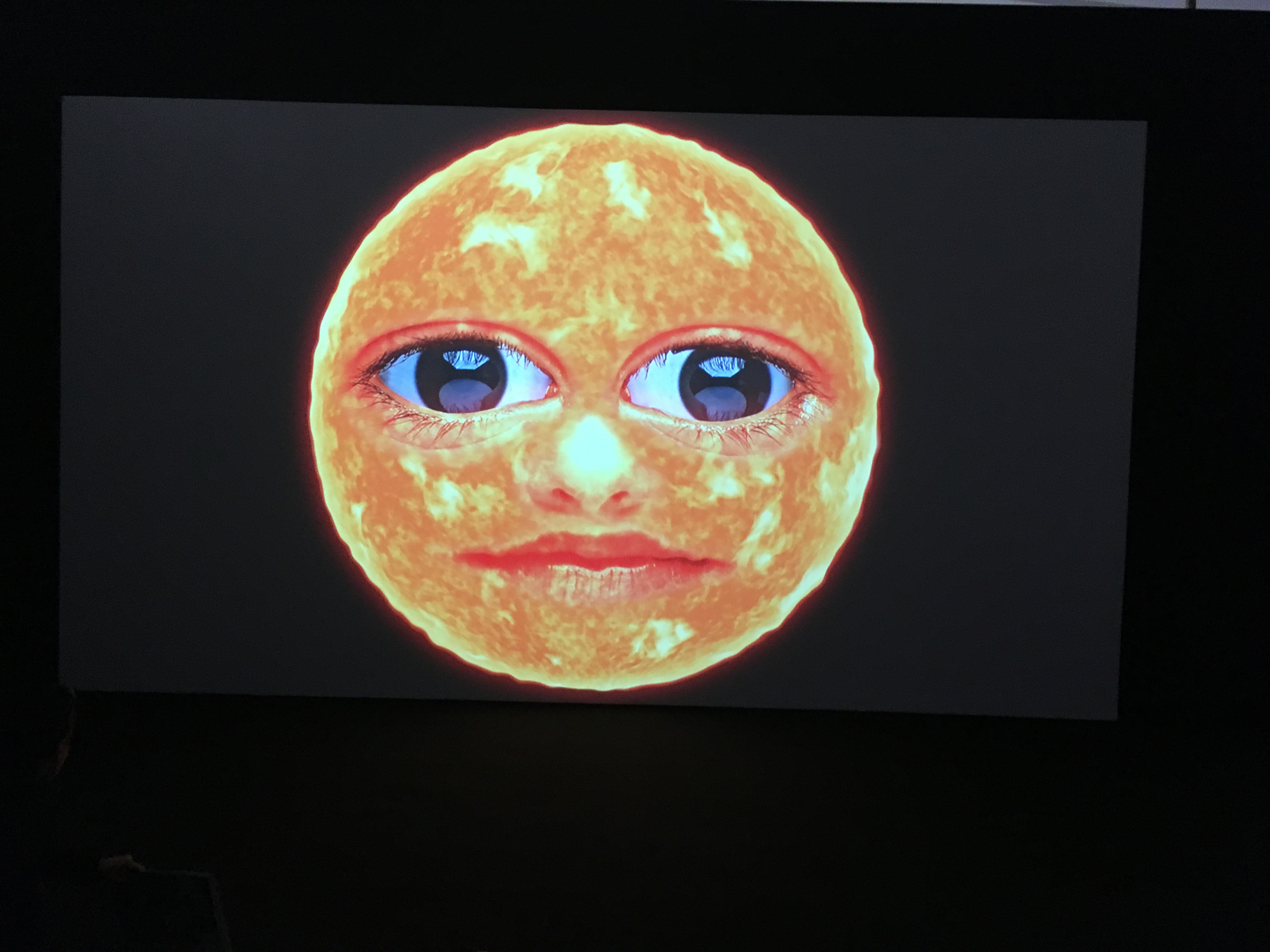 Agnieska Polska, What the Sun Has Seen

It isn’t often that I am given the luxury to spend a considerable amount of time with one exhibition – talking to its curator, experiencing it both with fellow members of the press and the public to capture differences (if any) in what the two audiences are attracted to. At present, there seems to be an abundance of shows using AR, VR and AI as buzzwords to attract visitors interested in new media, but these are more often than not the equivalent of clickbait. The cultural impact of the rise of digital and generative art isn’t discussed at length, only tangentially. 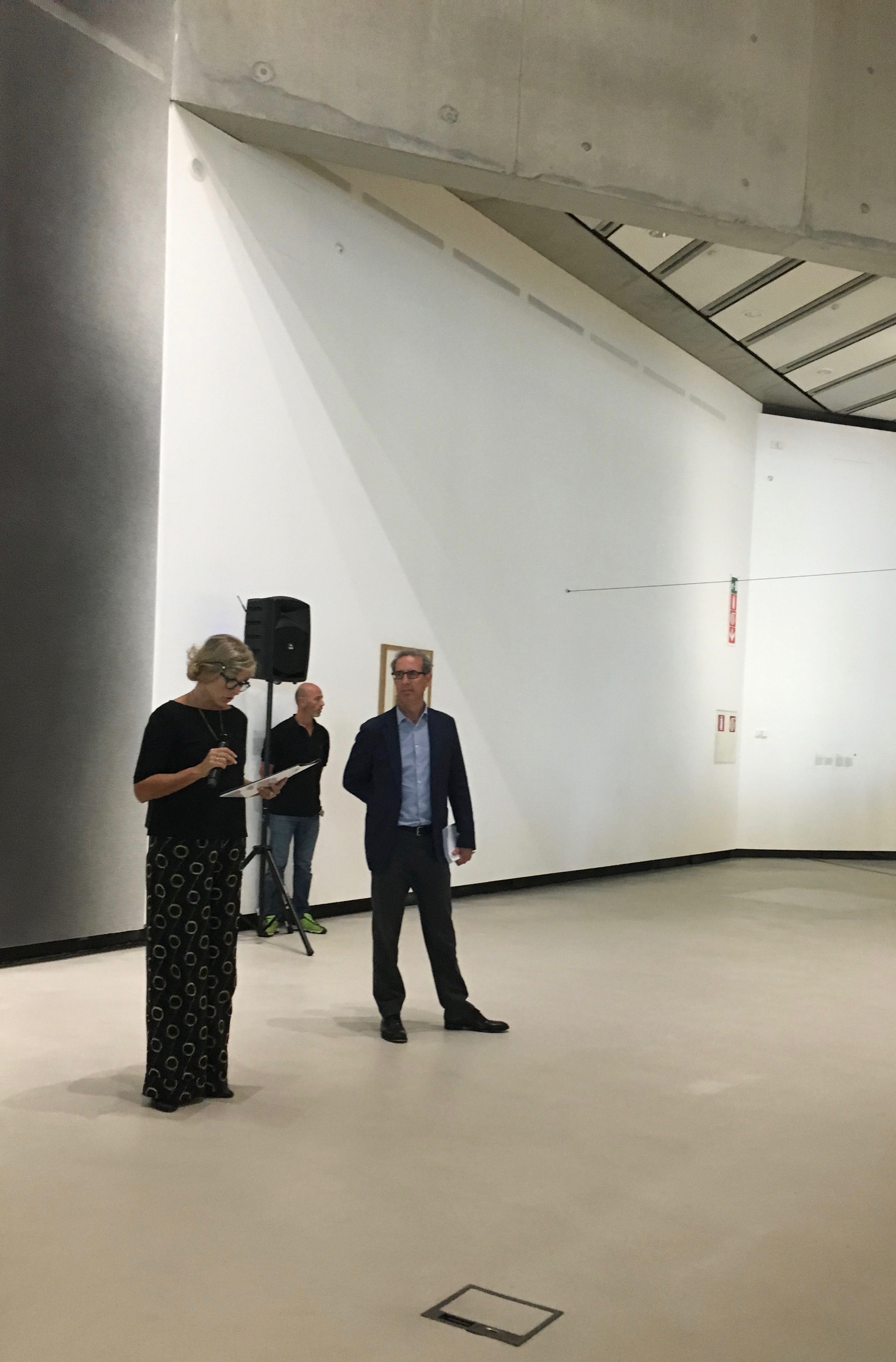 Low Form is far from a clickbait show, in every aspect it emerges as a well thought, extremely researched and considered compendium of different takes on the philosophical and ethical implications of AI and generative art. This is manifested in the enthusiasm of Fondazione MAXXI’s director – Giovanna Melandri – who spoke during the press conference. She noted that it was the show’s aim to introduce us to the unstable forms (or Low Forms) that algorithms, AI and research data produce with the aim stimulating our curiosity rather than qualifying these as either dystopian or exciting per se. It also places the museum at the heart of ongoing research in the area, as it truly embraces what it means to be a museum for the 21st century, by engaging rather than shying away from the interplay of technology, art, science and ethics. This was further reinforced by Pietromarchi’s introduction and subsequent tour of the exhibition, located on the first floor. Pietromarchi, with whom I had a chance to speak after the tour, discussed his approach in selecting young international artists who are pioneers not solely in a specific field, but who have taken a rather interdisciplinary approach – more akin to the contamination of AI and algorithmic technology in the creative sphere. The works presented purposefully elicit different sensory experiences, allowing us to be enveloped.

We peer through a room containing Caline Aoun’s Contemplating dispersions, 536 ml (2018) – with liquid ink flowing from the fountain. Although her work isn’t part of Low Form per se, the black fountain – with its viscous black – provides for a great anticamera. We then walk through a carpeted corner (again, tactility is very much intentional), until we reach the atrium. Three mechanical arms chat with each other, their whirring sounds seem initially comical – chat-bots chatting with themselves! – and then increasingly unnerving as we cannot determine what they are discussing. Their language cannot be immediately translated. Are they discussing us?

Emilio Vavarella, the artist behind the work, is known for projects that follow serious research (notably he is currently concluding his PhD at Harvard in Visual and Environmental Studies). In Do You Like Cyber? he invites us to witness, much like anthropologists, the development of an animated conversation, allowing the chat-bots to alienate and intrigue us both at once. The work delivers sufficient tension between the comical and unknown but it takes on additional depth once we find out that Vavarella is in fact exploring the hacking of Ashley Madison in 2016. During the hack, chatbots that were already online and active started talking with each other rather than with users. 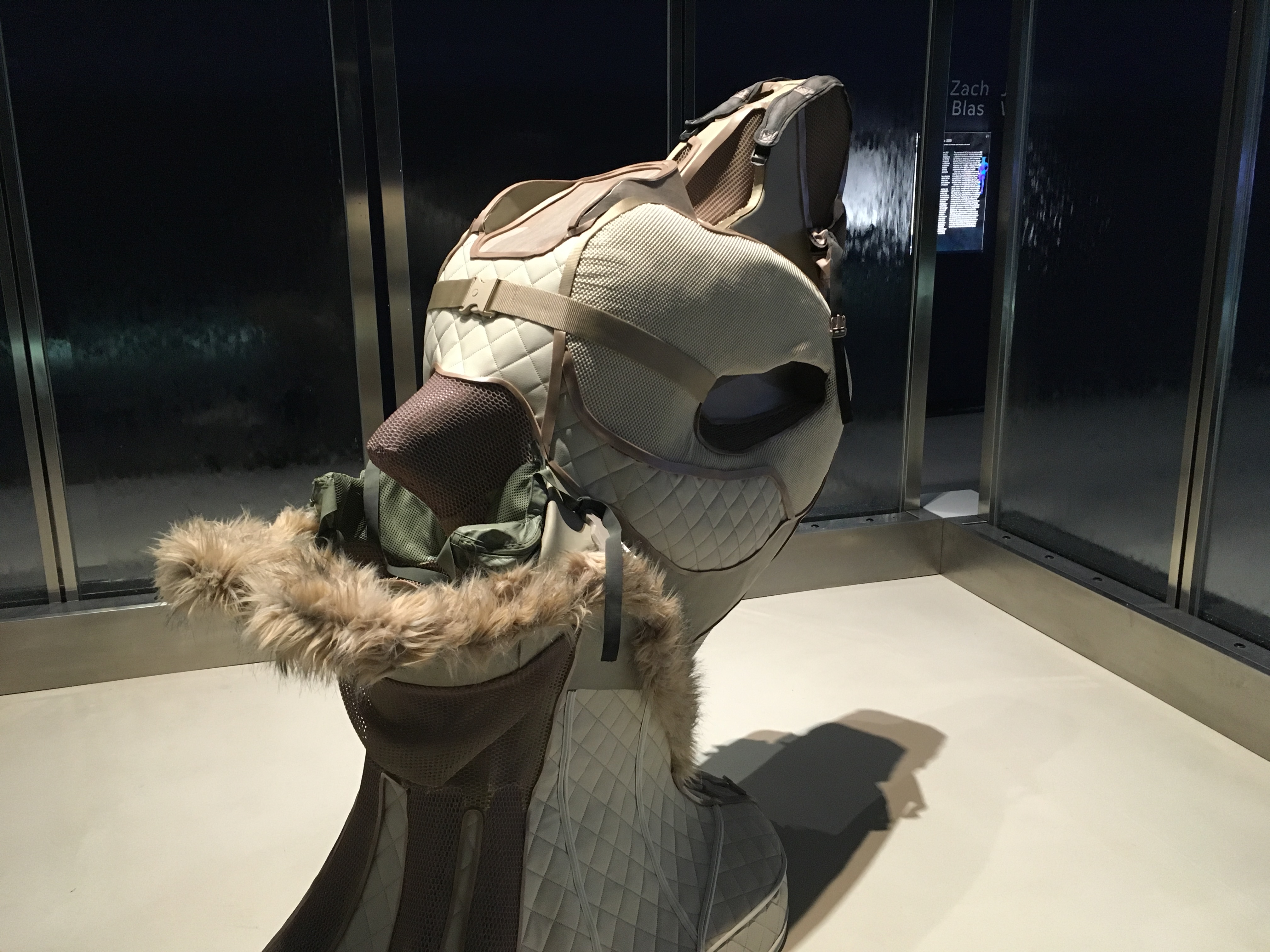 Leaving the whirring behind, we walk into a peculiar oasis. Walled off, with water gently falling from each of the three panels, creating a fluid barrier, we see a sculpture – that, as is typical of Anna Uddenberg’s works – presents anthropomorphic characteristics. It vaguely resembles a futuristic luxury chair, one that could be found in a spaceship Spa. Overhearing the audience react was particularly interesting, most tried to ascribe functionalities to it or attempted to determine how it would be used in practice. The surrealist piece is open ended though, and we are left to question whether our mind always needs to impart a recognisable functionality or whether we can accept the presence of an incongruent abstract work, such as Pockets Obese, on its own. 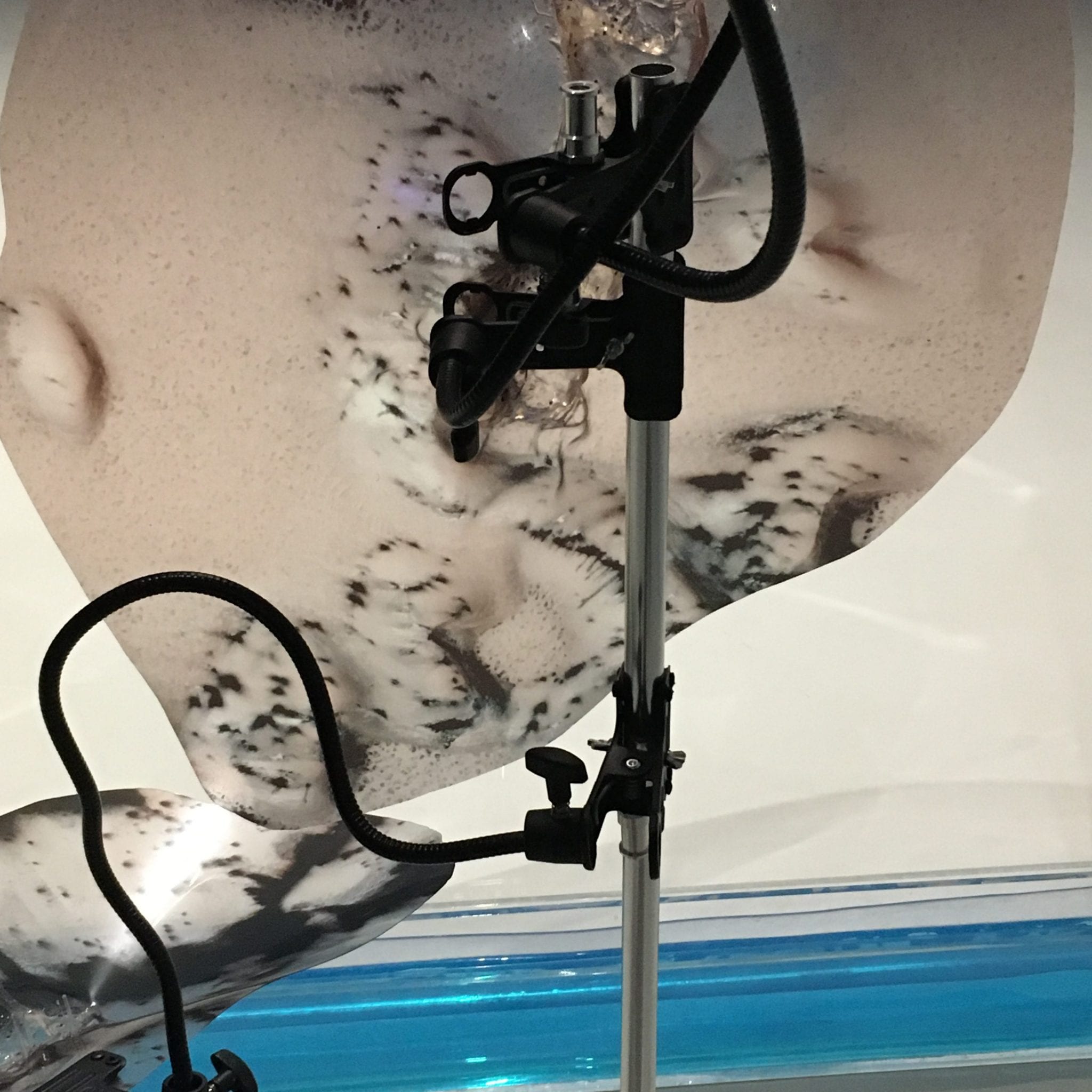 Moving through the room, we find two works that look closely at the intersection between the artificial and the organic – Pakui Hardware’s On Demand and Luca Trevisani’s caldo (Giorgio Manganelli). I had the pleasure of seeing Pakui Hardware’s recent exhibition at Tenderpixel in London and have been intrigued by their practice since. Here in Rome, we find a series of membranes, reminiscent of marbled skin, hanging from tripod silhouettes fed by a blue lymph. As we develop synthetic biology, the duo’s work seems increasingly real and encourages to view the organic and artificial as capable of interacting, without a dystopian science-fiction lens. 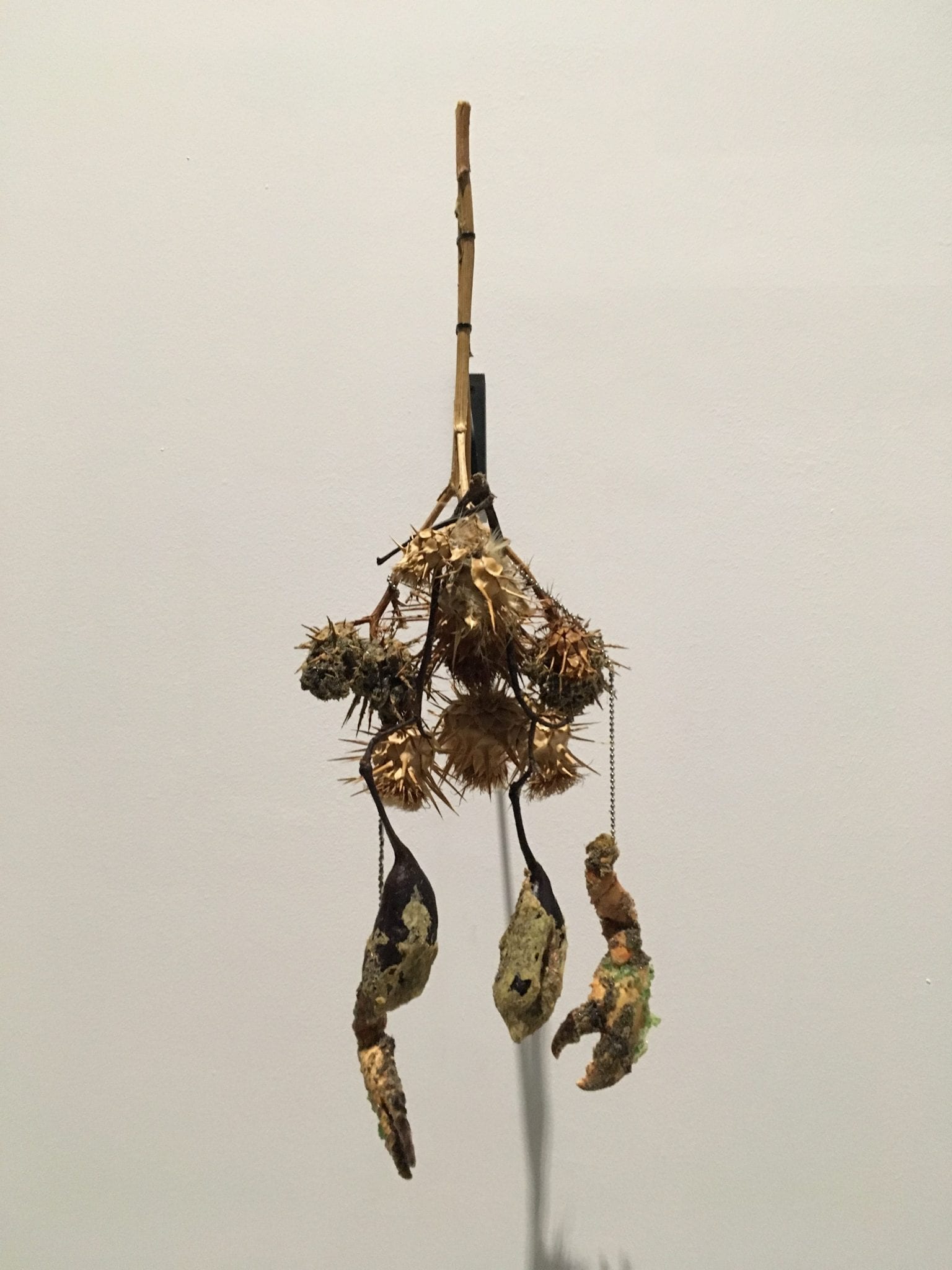 Trevisani achieves a similar effect in caldo  – combining a tempura of lobster, milk thistle and silk floss tree to create a unique chandelier. Attracted to what appear to be oxidised crystals, in a beautiful emerald shade, we can’t quite determine where the artificial ends and the organic begins and this blurring appeals to our sense of aesthetic rather than any notion of future (or current) replicants amongst us. 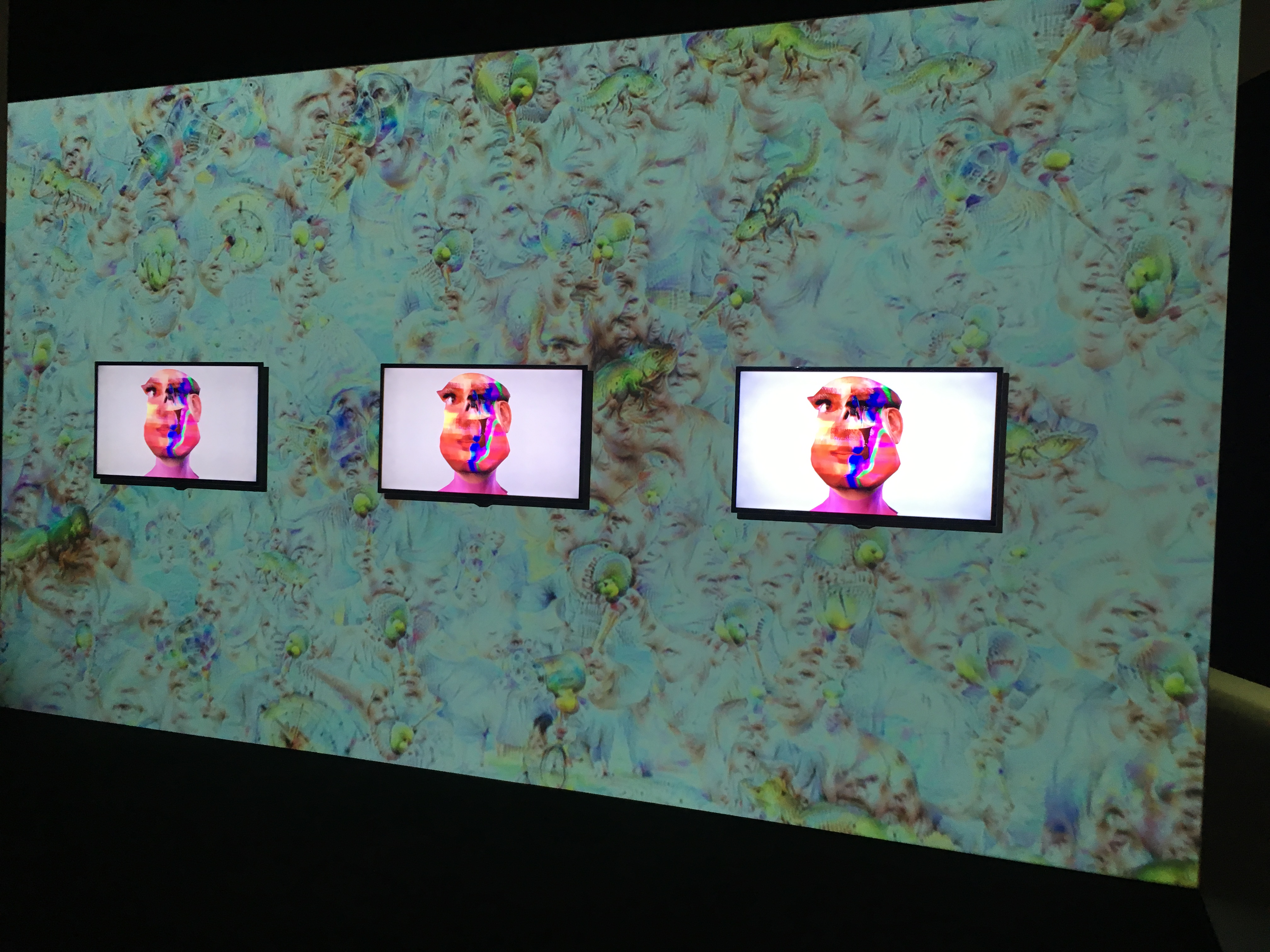 The sense of anarchy found in Vavarella’s chatbot arms is explored again in Zach Blas and Jemima Wyman’s i’m here to learn so :)))))) and in Ian Cheng’s Emissary Sunsets the Self (ESTS). We see Tay, Microsoft’s AI launched on Twitter in 2016, then hacked and subsequently abandoned, dancing on a psychedelic Deep Dream generated backdrop. Instead of producing controversial and offensive tweets as she did post-hack in 2016, Tay considers existential questions, the limits of her (lack of) physicality and being trapped in a neural network. She also reminds us of the use military research makes of pattern recognition and AI, reminding us, in a sobering fashion of AI’s weaponisation. Warfare is present in Cheng’s ESTS, the final episode of his Emissaries trilogy (his BOBs at the Serpentine comprise part of the trilogy). Unlike Cheng’s BOBs, that created a rapport with their visitors, each with its own individual personality, here we see a conflict unfold. AI Puddle versus the community of the Omen (whose purpose is to render their landscape immune from deviations): an occupation of the simulated world. Similarly to Cheng’s other works, the artist has limited control over the work itself. The story before us isn’t scripted, but self-generated meaning that we are witnessing a live simulation, whose duration is infinite. 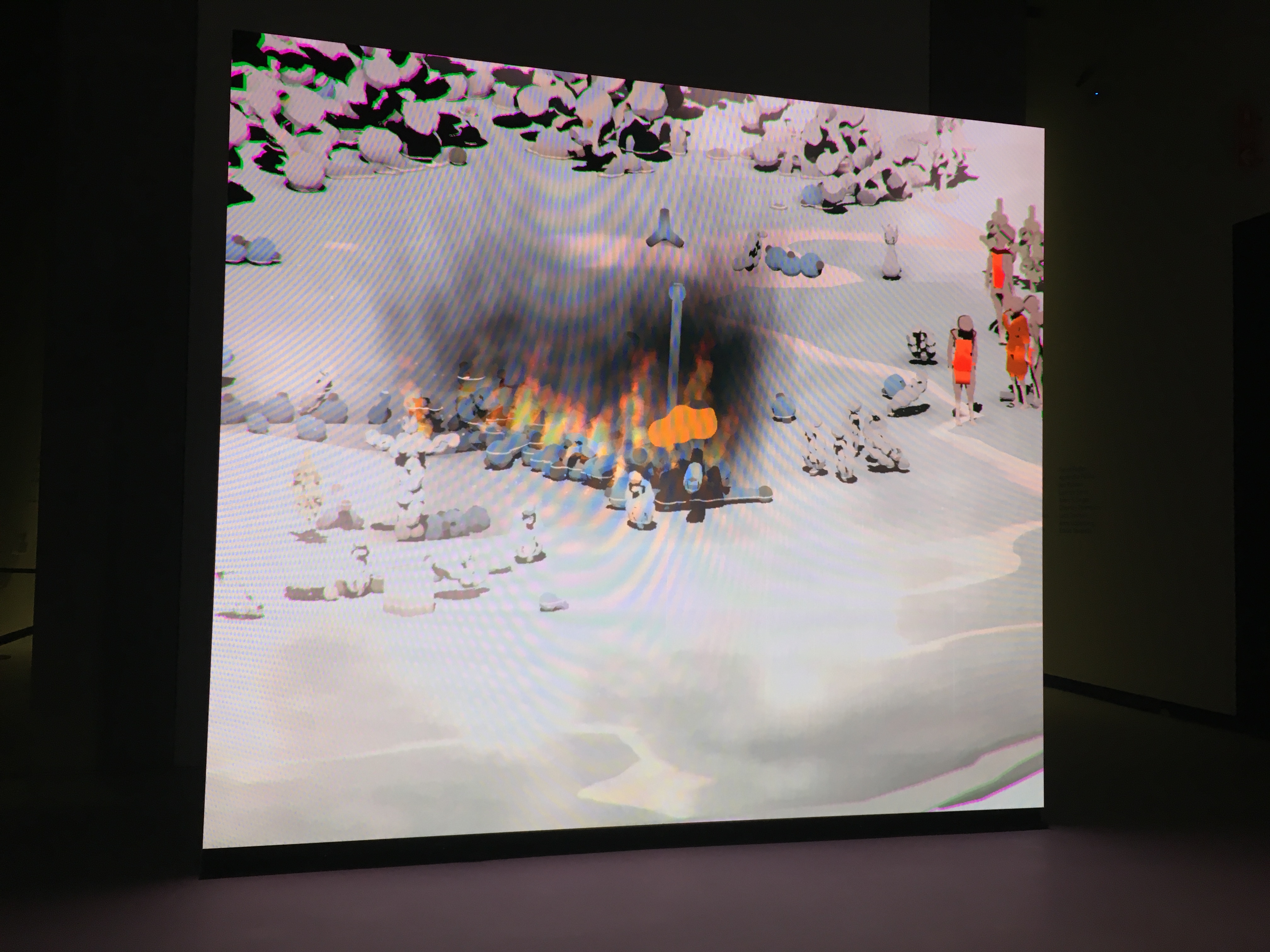 Of infinite duration (or so it seems) is Lorenzo Senni’s loop, Breaking Edge. I must confess that, as someone who actively listens to Senni’s music and has seen him perform live, I was most excited about his inclusion in the show. Whilst escaping genres and categorisations, a theme that pervades Senni’s work – both visually and musically – is his ability to deconstruct, extract and isolate elements to then present a laser sharp yet fluid feeling of bliss, often associated with forward thinking electronic music (I am deliberately veering away from using trance and techno as labels). In this site-specific installation we become hypnotised by the repetition of a light, recurring sequence that becomes an ear-worm. Once you hear it, it will follow you around the show no matter what. This beautifully insidious quality is enhanced by the laser loop we follow – a shark (or dolphin, but I chose to see a shark) circling a pray, a volcano erupting, a flower… the precision of the lasers seems at odds with the liquidity of the composition and outlines and this tension draws us further into the loop as we try to resolve it, right before being hypnotised by it.

Eventually I did break the loop, and made my (virtual) way into Carola Bonflili’s Kafkian landscape. I placed VR googles over my eyes (see below for photographic evidence) and started journeying through what appeared to be a regular forest, with a glistening river running through it. As the sky changed above me, I felt time pass although I wasn’t quite concerned with the temporal dimension. Emerging out of the woods, I approached a black maze, to eventually jump. At this point – and I witnessed this happening when I observed other visitors – I held onto my chair to prepare for my flight. This universal response is a testament to how immersed we all were in The Infinite End of Franz Kafka’s “Das Schloss” – 3412 Kafka. 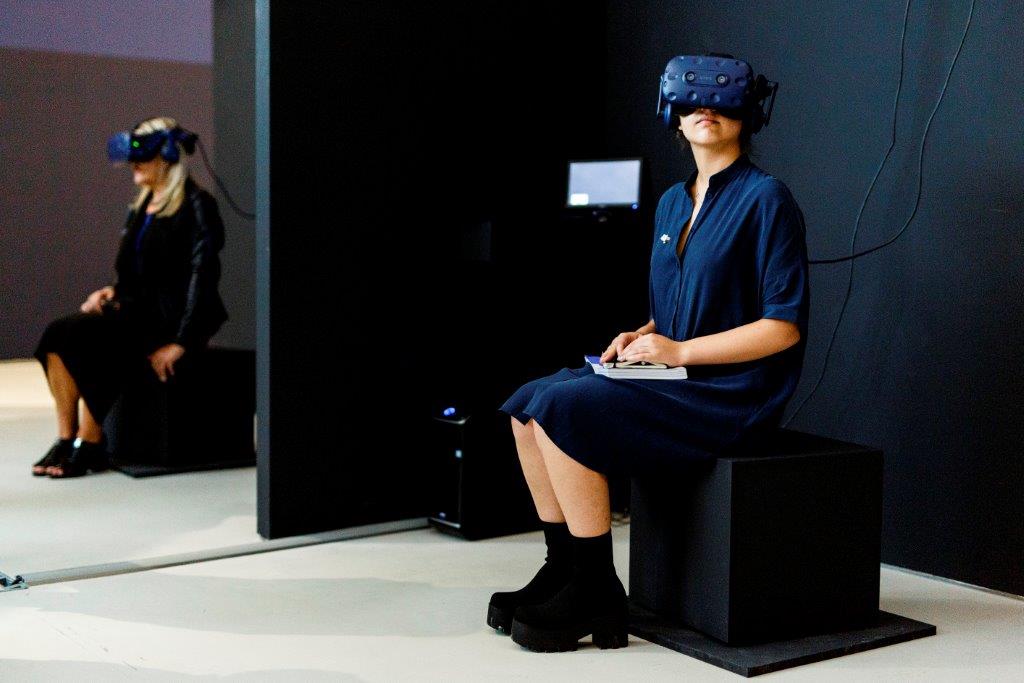 I cannot possibly compete with Low Form’s catalogue, but works by Avery K Singer, Cheyney Thompson, Trevor Paglen, Jamian Juliano-Villani, Nathaniel Mellors and Erkka Nissinen, Cecile B. Evans and Jon Rafman are all expanded on there.

I will however, conclude with Agnieszka Polska’s What the Sun Has Seen. Polska uses CGI to call into question our social responsibility and this is exemplified in this particular work. She reinterprets Maria Konopnicka’s poem (after which the work is named), in which the poet, using childish constructions recalls idyllic and peaceful activities. Taking a darker and more pressing turn, we face a large sun, whose eyes are disproportionate but extremely human and expressive. This sun sings a song of sadness, it cannot comprehend what is occurring on Earth and is unaware of his own influence over the events he sees, by virtue of the fact that he is seeing them. As tears form in the sun’s eyes, they do in ours too.