“I couldn’t think of a better place to have a dialogue about art today and what it can be.” 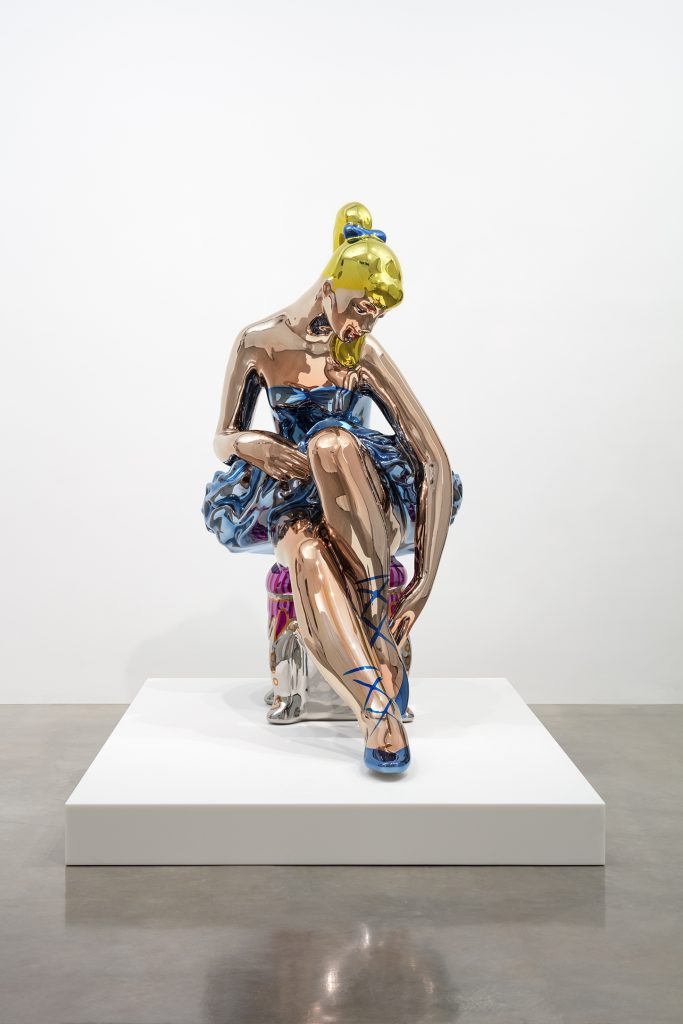 A major exhibition of the work of Jeff Koons (b. 1955) will be held at the Ashmolean Museum, Oxford, in spring 2019. Curated with Koons himself together with guest curator Norman Rosenthal, the show will feature seventeen important works, fourteen of which have never been exhibited in the UK before. They span the artist’s entire career and his most well-known series including Equilibrium, Statuary, Banality, Antiquity and his recent Gazing Ball sculptures and paintings.

‘In showing Jeff Koons at the Ashmolean, the world’s oldest public museum where the collections range from prehistory to the present, this exhibition will provoke a conversation between his work and the history of art and ideas with which his work engages. I am sure it will also provoke conversations among those who see it.’ 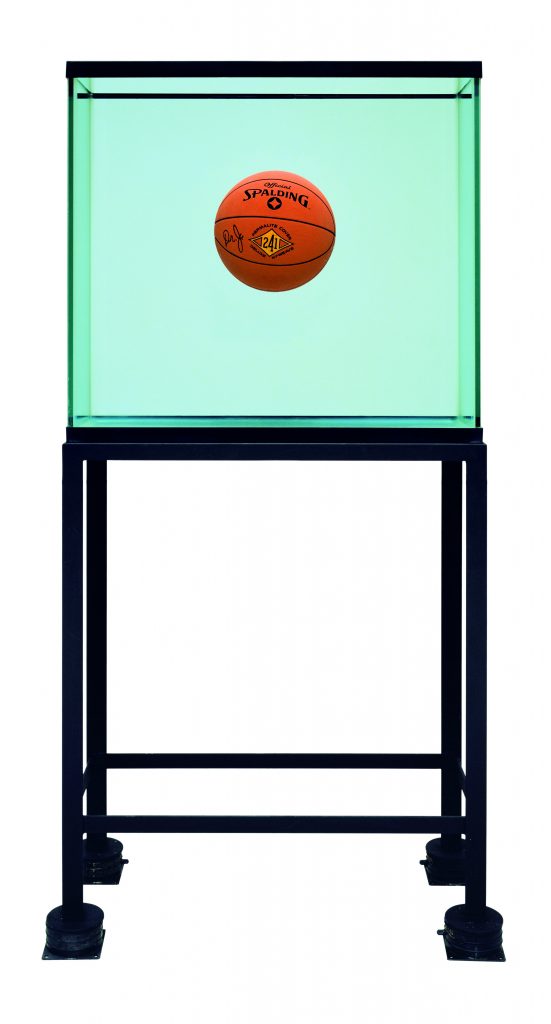 Jeff Koons is surrounded by superlatives. Since he burst onto the contemporary art scene in the 1980s he has been described as the most famous, important, subversive, controversial and expensive artist in the world. From his earliest works Koons has explored the ‘readymade’ and appropriated image – using unadulterated found objects, and creating painstaking replicas of ancient sculptures and Old Master paintings which almost defy belief in their craftsmanship and precision. Throughout his career he has pushed at the boundaries of contemporary art practice, stretching the limits of what is possible.

The Ashmolean exhibition will include important works from the 1980s with which Koons made his name through the novel use of the readymade and the appropriation of popular imagery: One Ball Total Equilibrium Tank (Spalding Dr. J 241 Series) (1985); Rabbit (1986); and Ushering in Banality (1988). It will also explore Koons’s more recent focus on the art of antiquity and the western art canon where layered images of ancient and modern art meet in Koons’s singular vision. Among the highlights will be the spectacular Balloon Venus (Magenta) (2008–12). While evoking the tiny Ice Age ‘Venus of Willendorf’, one of the world’s oldest works of art, Balloon Venus (Magenta) is made with Koons’s signature motifs: monumental scale; the inflated balloon with its intimations of transience and mortality; and the flawless mirror-polished surface which positions the viewer in the work. In his Antiquity paintings (2009 onwards) Koons creates thrilling, layered collages. Photo-realist reproductions of classical sculptures (of Venus, Pan and Priapus) are set against broken collages of other artworks or dazzling abstract backgrounds, overlaid with graffiti-like marks.

In more recent works, Koons has explored what he calls his ‘cultural DNA’, using sculptures and paintings from world-famous collections which have personal meaning for him. The Gazing Ball series (2012 onwards) positions perfectly blown reflective glass spheres on casts of ancient sculptures, meticulously painted replicas of European masterpieces, and museum-style plastercasts of mundane objects such as mailboxes and birdbaths. They continue Koons’s experiments with the remade ‘readymade’, the meeting of high art and the vernacular while engaging in a new way with the art of the past. Shown in the UK for the first time will be seven works from the series including Gazing Ball (Belvedere Torso) (2013), Gazing Ball (Gericault Raft of the Medusa) (2014–15), and Gazing Ball (Titian Diana and Actaeon) (2014–15).

‘Jeff Koons’s work plays with our memories of childhood and our “educated” cultural experiences as he blends high and low culture, inviting us to challenge the distinction as we gaze at art and at ourselves. Putting his work in the Ashmolean – the first museum in the very heart of academia, Oxford University – we can take his experiment a step further. For those of us willing to share in his visions, Jeff Koons makes art a magical transformation.’ 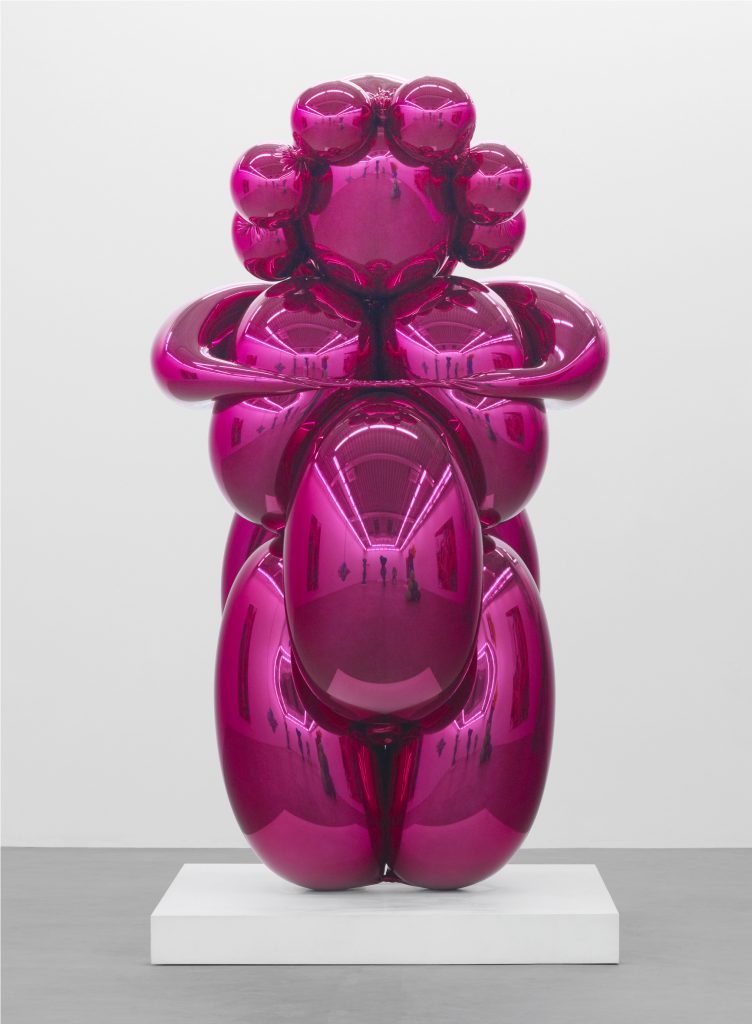 Since his first solo exhibition in 1980, Koons’s work has been shown in major galleries and institutions throughout the world. His work was the subject of a major exhibition organized by the Whitney Museum of American Art, Jeff Koons: A Retrospective (27 June–19 October 2014), which travelled to the Centre Pompidou Paris (26 November 2014–27 April 2015) and the Guggenheim Bilbao (9 June–27 September 2015).

Koons is widely known for his iconic sculptures Rabbit and Balloon Dog as well as the monumental floral sculpture Puppy (1992), shown at Rockefeller Center and permanently installed at the Guggenheim Bilbao. Another floral sculpture, Split-Rocker (2000), previously installed at the Papal Palace in Avignon, Château de Versailles, and Fondation Beyeler in Basel, was most recently on view at Rockefeller Center in 2014. Jeff Koons has received numerous awards and honours in recognition of his cultural achievements. Notably, Koons received the Governor’s Awards for the Arts “Distinguished Arts Award” from the Pennsylvania Council on the Arts; the “Golden Plate Award” from the Academy of Achievement; President Jacques Chirac promoted Koons to Officier de la Légion d’Honneur; and Secretary of State Hillary Rodham Clinton honoured Koons with the State Department’s Medal of the Arts for his outstanding commitment to the Art in Embassies Program and international cultural exchange. In 2017, Koons was made the first Artist-in-Residence at Columbia University’s Mortimer B. Zuckerman Mind Brain Behavior Institute and, also, made an Honorary Member of the University of Oxford’s Edgar Wind Society for Outstanding Contribution for Visual Culture. Koons has been a board member of The International Centre for Missing & Exploited Children (ICMEC) since 2002, and co-founded the Koons Family International Law and Policy Institute with ICMEC for the purpose of combating global issues of child abduction and exploitation and to protect the world’s children.