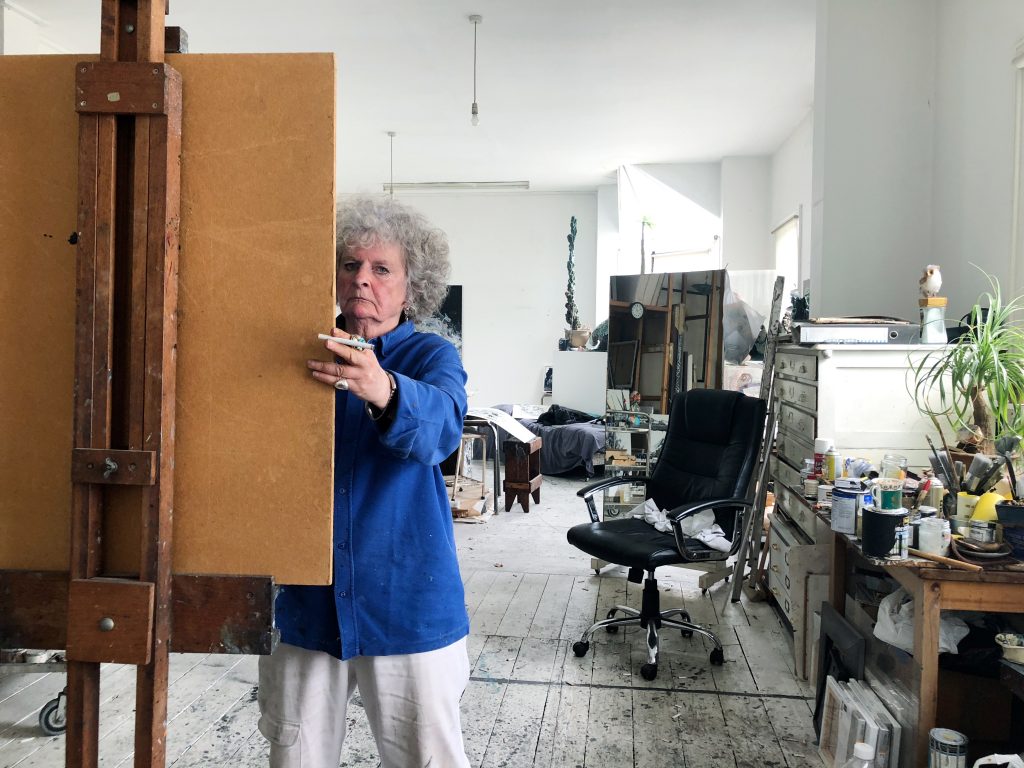 The Quick and the Dead is an exhibition of five ground-breaking artists – each radically different in their approach – whose lives have intersected at various points. The artists are friends who have portrayed each other at different moments and are being displayed together for the first time this autumn at Jerwood Gallery, Hastings. In this new exhibition, The Quick and the Dead centres on paintings and drawings made over the past decade by Maggi Hambling, in which she has portrayed Horsley, Lucas, Simmons and Teller. These works are in dialogue with portraits of Hambling made by the other living artists.

This is highly personal, a sequence of artistic interactions, and a celebration of portraiture and its ongoing possibilities. The exhibition has its roots in a 2005 meeting at The Colony Room Club, Soho, where Hambling was introduced to Sarah Lucas by their mutual friend Sebastian Horsley. A friendship between Hambling and Lucas was formed, and in due course made portraits of each other, providing the creative catalyst for this exhibition.

Sebastian Horsley, the writer, artist and self-styled Soho dandy is depicted in a full-size drawing from life and in a sequence of paintings made by Hambling following his death in 2010 – a ‘rogues gallery’ of heads in which he appears as variously ghostly and spry, lifeless and animated (right). Sarah Lucas also created a ‘portrait’ of Horsley in 2000, with a video of his trip to the Philippines to be ritually crucified. 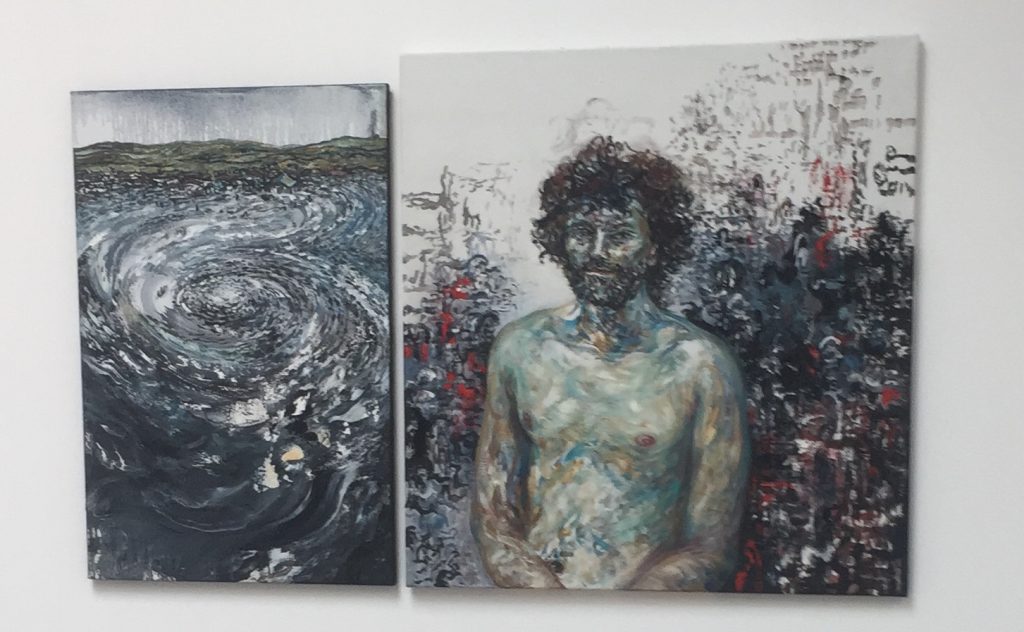 Hambling has portrayed artist Julian Simmons, Lucas’s partner, within a diptych: a portrait of Simmons surrounded by one of his digital compositions is juxtaposed with Hambling’s painting of a tsunami whirlpool, which he studied during the sittings. This vision of the artist is mirrored in a drawing by Simmons, in which he conjures Hambling in the form of concentric graphite circles – one of a series of ‘orbicular drawings’ painstakingly built up in thousands of revolutions. An abstract symbol transmuting into a portrait: the universal becoming specific and singular. 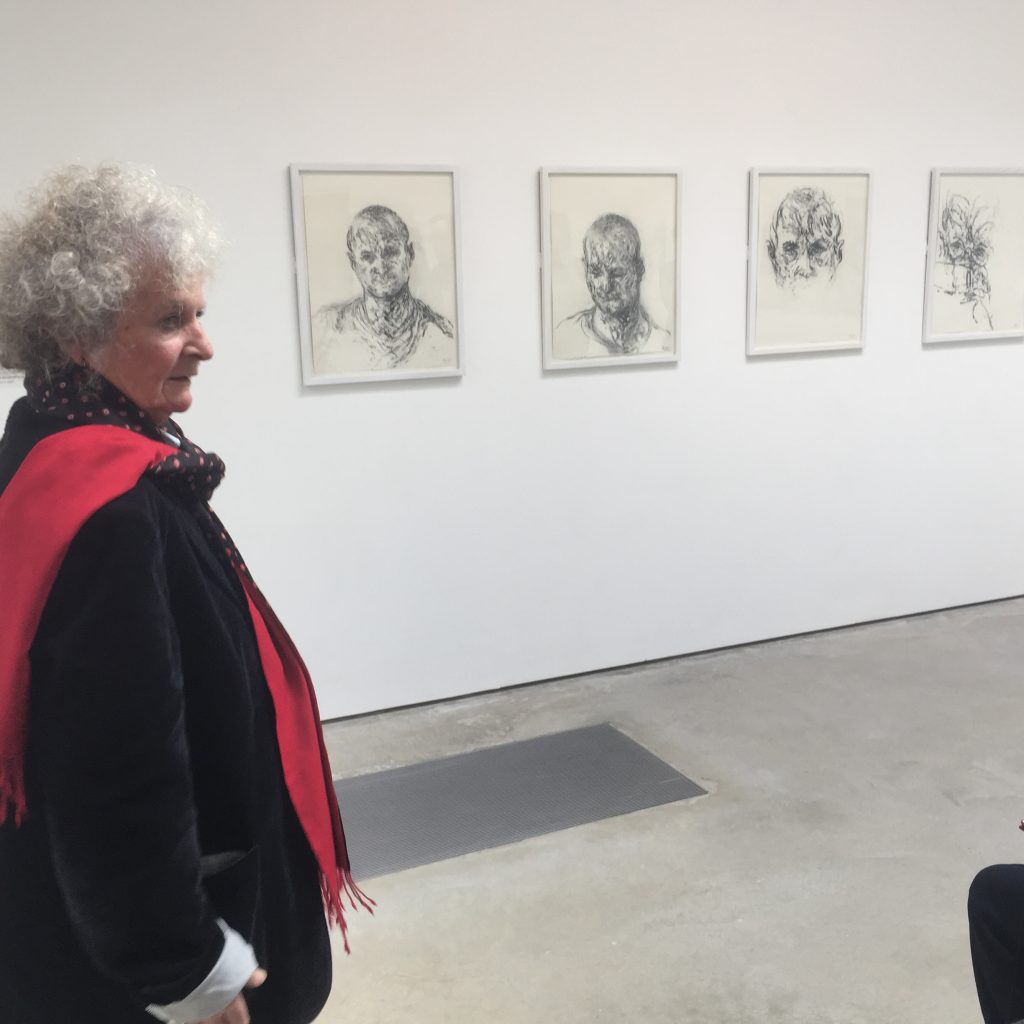 Maggi Hambling alongside her charcoal drawings of Juergen Teller

In a new group of charcoal drawings, made earlier this year in her London studio, Hambling depicts the photographer Juergen Teller from multiple angles. Teller reciprocated with a series of photographs showing Hambling at work – the first pictures ever taken of Hambling in the act of making. In one rapid drawing, Hambling captures Teller at the moment he photographed her. This drawing embodies the spirit of the exhibition – an image of artistic exchange, of looking and being looked at.

The Quick and the Dead also features self-portraits by each of the artists, revealing how their visions of each other find parallels – or precedents – in their images of themselves.  With portraiture at the heart of this exhibition, Hambling says “A portrait is like a love affair – an intimate, challenging and complex thing.”

It is particularly apt that this exhibition is at Jerwood Gallery, as Maggi Hambling is not only featured in the Jerwood Collection and shared the Jerwood Painting prize with Patrick Caulfield in 1995, but also laid the foundation stone for the construction of the seaside gallery back in 2011. 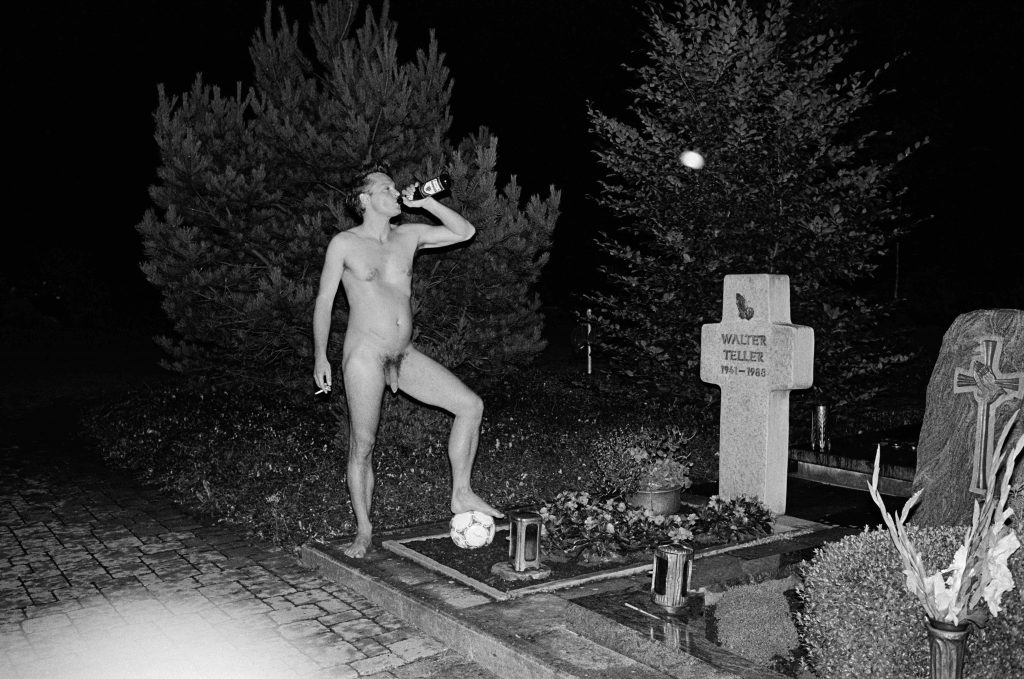 About The Artists
Maggi Hambling (born 1945, Suffolk). Studied with Lett Haines and Cedric Morris, and then Ipswich, Camberwell and the Slade Schools of Art. In 1980 she became the First Artist in Residence at the National Gallery, London, and in 1995 won the Jerwood Painting Prize (with Patrick Caulfield). In 1998 her sculpture A conversation with Oscar Wilde was unveiled at Adelaide Street, London, facing Charing Cross Station. In 2003 Scallop, a sculpture to celebrate Benjamin Britten was unveiled in Aldeburgh, Suffolk which in 2005 was awarded the Marsh Award for Excellence in Public Sculpture for Scallop. Solo museum exhibitions include Maggi Hambling, Serpentine Gallery, London, 1987, An Eye Through a Decade, Yale Center for British Art, Newhaven, Connecticut, 1991, A Matter of Life and Death, Yorkshire Sculpture Park, 1997,  George Always, The Walker Art Gallery, Liverpool, 2009,  Maggi Hambling – The Wave, the Fitzwilliam, Cambridge, 2010 War Requiem, Installation, SNAP 2013 purchased for Aldeburgh Music by the Monument Trust, Wall of Water, The Hermitage, St Petersburg, USSR, 2013,  Walls of Water, National Gallery, London 2014, War Requiem & Aftermath, Somerset House, London 2015, Touch, British Museum 2016 / 17.  Currently, Hambling’s portrait of Michael Jackson is exhibited in Michael Jackson: On The Wall National Portrait Gallery, London.

A peacock without a cause. That, most likely, is how Sebastian Horsley would have described himself. But Horsley, born in Hull in 1962 and (despite parental money being thrown at the problem) largely self-educated, dedicated his life to the creation of a dandified persona that challenged convention with as much teasing laughter as philosophical depth. As a painter he worked in series, taking as his subjects his totemic sunflowers; the great white sharks with which he had dived off the coast of Australia; the crucifixion which came to obsess him to such a degree that, in 2000, he travelled to the Philippines to be nailed to a cross. But it was less his canvases than his character that marked him as an artist. As flamboyantly compelling as he was brazenly self-deprecating, as outlandishly funny as he was willfully deviant. He captured his personality in his 2003 autobiography Dandy in the Underworld, a book which was turned into a one man play. It opened in Soho in 2010. Horsley, who had been an addict most of his adult life, died of a drugs overdose on its opening night.

Sarah Lucas’s work — which spans sculpture, photography and installation — is characterised by an irreverent humour and the use of everyday, ‘readymade’ objects including furniture, food, tabloid newspapers, tights, toilets and cigarettes. From September 2018 to January 2019, she the subject of a retrospective at the New Museum, New York. Lucas (b. 1962, London) studied at the Working Men’s College (1982–3), London College of Printing (1983–4), and Goldsmith’s College (1984–7). Following her participation in Freeze (1988), early solo shows included Penis Nailed to a Board, City Racing, London, and The Whole Joke, Kingly Street, London (both 1992). She has since exhibited internationally with major exhibitions including those at MoMA New York (1993); Museum Boymans-van Beunigen, Rotterdam (1996); Portikus, Frankfurt (1996); the Freud Museum, London (2000); Tecla Sala, Barcelona (2000); and In-A-Gadda-Da-Vida (with Angus Fairhurst and Damien Hirst) at Tate Britain (2004). A retrospective took place in 2005 at Kunsthalle Zürich, Kunstverein Hamburg and Tate Liverpool. In 2015 she represented Britain at the Venice Biennale, with the exhibition I SCREAM DADDIO. Other recent international exhibitions include Sarah Lucas: Good Muse, Legion of Honor, San Francisco (2017); POWER IN WOMAN, Sir John Soane’s Museum, London (2016); NOB + Gelatin, Secession, Vienna (2013); and SITUATION ABSOLUTE BEACH MAN RUBBLE, Whitechapel Gallery, London (2013).

Julian Simmons, born in London in 1971, still uses a USSR binocular-head Biolam microscope given to him in 1980, with an oil-immersion achromat 90x objective lens, it has molded him ever since. Inspecting either diatoms, vorticella, rotifers, sperm or pollen grains, a biography from the nutshell. He was a student and visiting lecturer at the RCA, developed a programmable electronic drawing machine and receiving a doctorate in Fine Art on the Cosmology of Tone (2004). He moved to Suffolk (2007) where he now lives and works. In 2011 he began building experimental sound synthesis instruments employing a language known as Pure-Data, designed at IRCAM / founded by Pierre Boulez. He has performed quadraphonically in London, Suffolk, Milan and Oslo. TOWER is his most recent album release. The Orbicular Drawings ?rst seen in the show NOW JULIAN SIMMONS (2015) continue this encircling exploration, visually, with pencil lead. He considers these drawings to be time-based self-portraits. Line recordings of basic perturbations in consciousness, over the time taken to make them; replayed though your observation. An expert printmaker, involved in all aspects of photography for over 30 years including designing systems for radio-controlled aerial photography, he has made prints that have been shown in Auckland (Two Rooms), Brussels (Gladstone Gallery), New York (Karma), Berlin (CFA), London (Situation, Sadie Coles HQ, Whitechapel Gallery, Paul Stolper) and Mexico (kurimanzutto), as well as ?lm-works screened in London (Situation, Sadie Coles HQ, Whitechapel Gallery, ICA), Berlin (CFA), Vienna (mumok), Krems (Kunsthalle), Mexico (kurimanzutto) and online (British Council). Publications include the photographic content and design of books, many in collaboration with Sarah Lucas, including PENETRALIA (2008) large format, limited edition, printed by Simmons; TITTIPUSSIDAD (2013) an adobe block of a documentary catalogue picked as the best art book by Dazed Digital and 032c; noB (2014) rare photographic insight into Lucas at work; I SCREAM DADDIO (2015) a custard sandwich of a Venice Biennale catalogue; BLACK MILK (2015) thesis/ atlas of Orbicular drawings; ENERGY DAIRIES (2011) psychedelic talk with Franz West & music by Philipp Quehenberger, DVD+CD box set.

Juergen Teller (b. 1964, Erlangen, Germany) is one of the leading photographers of his generation. He does not distinguish between his commercial and non-commercial work, treating all of his subjects—family members, models, celebrities, and himself—in his iconic, gritty style. Perhaps best known as a fashion photographer, he has shot high profile campaigns for brands including Celine, Louis Vuitton, Marc Jacobs, and Vivienne Westwood, and has published over forty photographic books and exhibition catalogues. He currently holds a Professorship of Photography at the Akademie der Bildenden Künste Nürnberg. Teller’s work has been shown in major solo exhibitions around the world, including at the Garage Museum of Contemporary Art, Moscow (2018), Fotomuseum Winterthur, Switzerland (2018), Institute of Contemporary Art, London (2013), Moscow House of Photography, Russia (2011), and Daelim Contemporary Art Museum, Seoul (2011). In 2003 Teller was awarded the Citibank prize for his exhibition at The Photographers Gallery, London. His work is represented in major museum collections worldwide including Centre Pompidou, Paris, Daelim Contemporary Art Museum, Seoul, Fotomuseum München, Munich, Fondation Cartier pour l’art Contemporain, Paris, International Centre of Photography, New York, Kunsthaus Zürich, Zürich, Museum für Moderne Kunst, Frankfurt, National Portrait Gallery, London, and the Victoria & Albert Museum, London.