Hiding In Plain Sight: an exhibition that celebrates the female artists who helped shape the golden age of abstract expressionism in mid-twentieth-century America - FAD Magazine
Skip to content

Amar Gallery is to present Hiding In Plain Sight: an exhibition that celebrates the female artists who helped shape the golden age of abstract expressionism in mid-twentieth-century America. The first of its kind in Europe, the exhibition brings together a collection of works from key cultural progenitors of the time – women who deserve their rightful place in art history, but who have been historically overlooked in favour of their male counterparts. The collection comprises a unique selection of oil on canvas, works on paper, prints and collages from the defining artistic movement of the 20th century brought together in recognition of the female trailblazers who are finally acknowledged as being some of the movement’s shining lights. 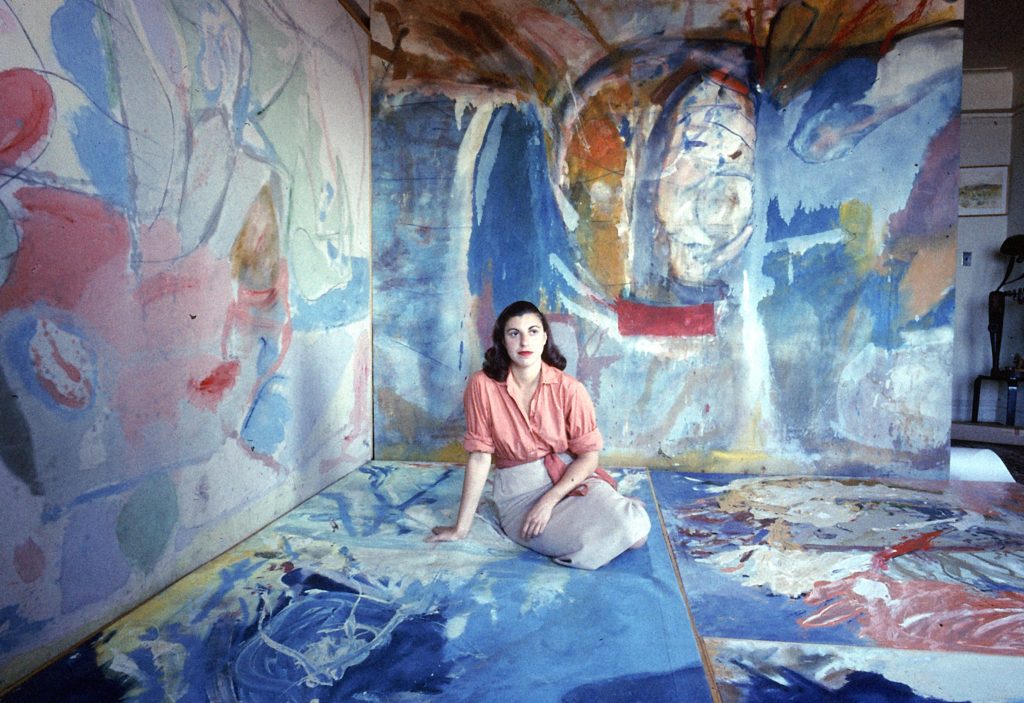 Hiding In Plain Sight will take the viewer back to the bustling world of 1950’s downtown Manhattan, a hive of restless energy and burgeoning feminist attitude. Showcasing the birth and boom of abstract expressionism in its flourish of colour and daring compositional intrigue, works will range from the post-impressionist landscapes of Lynne Drexler to Elaine de Kooning’s gestural meditations on nature. Whether it be Helen Frankenthaler, who in her early twenties was a founder of the cutting-edge colour field aesthetic that placed her in direct step with Rothko, or Ethel Schwabacher, whose loose brushstrokes are bold statements of a woman’s emergence from a man’s shadow, each individual work is heavily engaged in the complex gender politics of the age, as well as enduring testaments to the famous New York School of painting. 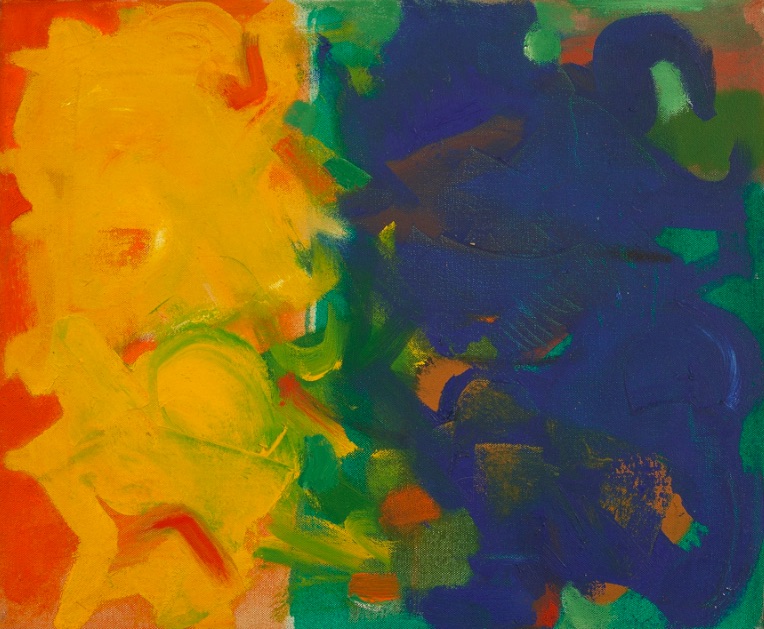 Inspired by the 9th Street Art Exhibition that arguably brought abstract expressionism to culture’s pre-eminent force, Hiding In Plain Sight captures the very moment when women helped shift the centre of the modernist art world from the salons of Paris to the bohemian haunts of post-war America. The exhibition also hopes to shed light on a collective of women who, though operating with an unbreakable unity of stylistic consciousness, have been traditionally sidelined in favour of men. In spite of what artist Paul Brach termed the ‘fifties boys’ club’ of first and second generation abstract expressionists, Hiding In Plain Sight asks the viewer to re-evaluate the role of women within this influential moment of American art heritage – for in the words of Grace Hartigan, ‘I bring my experience, which is different from a man’s, and put it where I can. But once that is done, I don’t know if it’s a woman’s experience I’m even looking at.’

The exhibition has been carefully curated by Dr John Paul Rollert, who teaches extensively at both Chicago University and Harvard. In his choices, Rollert makes clear his intention to celebrate American women whose work has been almost entirely overlooked – so much so that many of these artists have never been exhibited in the United Kingdom before.

‘These women were at the forefront of the first great movement in contemporary art that American artists uniquely championed,’

‘and yet they have never been recognised for their remarkable contributions. In fact, so overlooked were they by their peers that, at the end of this period in 1971, the art critic and historian Linda Nochlin could famously ask: ‘why have there been no great women artists?’ The answer: they were hiding in plain sight.’ 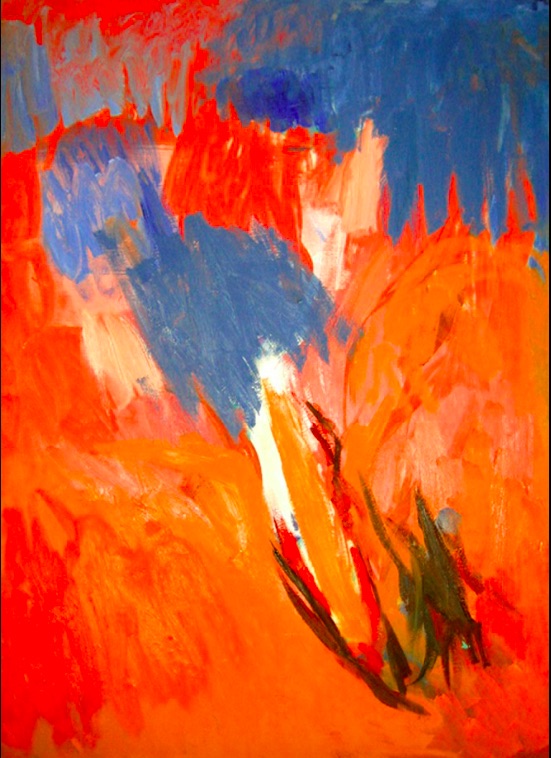 ABBOTT (b. July 27, 1921) is known for her role in shaping the school of abstract expressionism in the late 1940s and 1950s. Her abstract and figurative work were influenced by time spent in St. Croix and Haiti, where she lived on and off throughout the 1950s. Raised in Southampton, she came from a family of strong women and historical lineage (she is a descendent of the second president of the United States, John Adams).

ELAINE DE KOONING (12 March 1918 – 1 February 1989) was an accomplished landscape and portrait artist active in the abstract expressionist movement of the early twentieth century. She wrote extensively on the art of the period and was an editorial associate for Art News Magazine. She married painter Willem de Kooning in 1943: her husband cites Elaine as the inspiration both for his career and artistic direction. Though Elaine was very serious about her own work, she was well aware that it was often overshadowed by her husband’s fame: after exhibiting her own work alongside the likes of Jackson Pollock and Lee Krasner in the 1951 exhibition Artists: Man & Wife, Kooning commented that ‘it seemed like a good idea at the time, but later I came to think that it was a bit of a put-down of the women. There was something about the show that sort of attached women-wives – to the real artists’.

LYNNE MAPP DREXLER (21 May 1928 – 30 December 1999) is a painter associated with the second generation of abstract expressionist artists that emerged in the latter half of the 1950s – a distinguished group which included Larry Rivers, Robert Rauschenberg, Jasper Johns, Joan Mitchell, Robert Goodnough and Grace Hartigan. Her major influences included her teachers Robert Motherwell and Hans Hoffman.

AMARANTH EHRENHALT (b. January 15, 1928) is one of the few living abstract expressionists of the 1950s, still actively working and producing fine art. After spending more than thirty years living in France and Italy, Ehrenhalt returned to the home base of the New York School in 2008. She lived in New York in the early ’50s, where she established herself as a multifaceted artist with many solo and group exhibitions in Paris, Italy, New York, and California. Her work expands beyond the canvas to include drawings, prints, watercolours, tapestries, mosaics, murals, sculptures, poetry, prose and more.

PERLE FINE (30 April 1905 – 31 May 1988) was an artist at the forefront of the abstract expressionist movement as it unfolded in New York and East Hampton, Long Island. She gained recognition after World War II, when she received a grant from the Solomon R. Guggenheim Foundation and showed at both Peggy Guggenheim’s Art of This Century Gallery and the Museum of Nonobjective Painting (now the Guggenheim Museum). Her first solo exhibition was held at Willard Gallery, New York, in 1945. Subsequently, she showed at Betty Parsons Gallery and the Tanager Gallery, the first New York artist’s cooperative. In 1949, she was one of few female artists invited by de Kooning to join The Club, the intellectual artists’ group that he and Kline led.

HELEN FRANKENTHALER (12 December 1928 – 27 December 2011) was among the most influential artists of the mid-20th century and a major contributor to the history of postwar American painting. Having exhibited her work for over 6 decades, abstract expressionist Helen Frankenthaler was working from the early 1950s until 2011. She was included in the 1964 Post-Painterly abstraction exhibition curated by Clement Greenberg, introducing a newer generation of abstract painting that came to be known as Colour Field. She worked alongside Greenberg, Hans Hofmann, and Jackson Pollock. Her work has been the subject of several retrospective exhibitions, including a 1989 retrospective at MoMa. In 2001, she was awarded the National Medal of Arts.

JUDITH GODWIN (b. 1930) was born to a father who was interested in architecture and landscape gardening. His interests created an environment that inspired and encouraged Judith to pursue painting. She attended Mary Baldwin College in 1948 for two years, and later attended the Art Students League of New York and the Hans Hofmann School of Fine Arts. It was during this time she met Jackson Pollock, Franz Kline, Willem de Kooning and Marcel Duchamp. She lives in Greenwich Village, but as a native Virginian, remains a member of the Jamestowne Society. Her papers are held at the Archives of American Art.

Grace HARTIGAN (28 March 1922 – 15 November 2008) was both a second-generation abstract expressionist painter and a forebear of Pop Art, though she was not satisfied with either categorisation. In explaining the content and purpose of her work, Hartigan once said: ‘perhaps the subject of my art is like the definition of humour—emotional pain remembered in tranquility.’ Hartigan painted intensely coloured, gestural figures, inspired by colouring books, film, canonical painting, and advertising. She was a disciple of Jackson Pollock and Willem de Kooning, and also studied with Isaac Lane Muse. She gained early critical attention when in 1950, she was included in Clement Greenberg and Meyer Schapiro’s “New Talents” exhibition. In 1958, Hartigan was hailed by Life Magazine as one of the best young female American painters.

CHARLOTTE PARK (1918-2010) was an important contributor to abstract expressionism movement, though her contribution has only recently been acknowledged. Writing in the New York Times, just before Park died in late 2010, Roberta Smith called Park “a natural painter and a gifted colourist,” whose “ascension into the ranks of widely known Abstract Expressionists” was probably too late for her to witness. Overshadowed by the attention given to the work of her husband, James Brooks, Park kept a low profile over the course of her career, while painting some the strongest and most brilliantly coloured canvases of her time. Her art is a strong case against the idea prevalent from the 1950s onward that women were incapable of the muscularity and confidence necessary to be action painters.

ETHEL SCHWABACHER (20 May 1903 – 25 November 1984) started her art education in sculpture. In 1923, after her apprenticeship in stone carving with the sculptor Anna Hyatt Huntington, Schwabacher abandoned sculpture and enrolled in Max Weber’s painting class at the Art Students League. That year she met Arshile Gorky, with whom she developed a lifelong friendship. Gorky’s surrealistic-inspired imaginary, biomorphic abstractions and erotic forms drawn from his unconsciousness fascinated Schwabacher and she became interested in exploring her own psyche. The paintings from this period combine automatism with abstract forms, referring to nature. Through the 50’s, Schwabacher developed the interconnected themes of womanhood, childbirth and children. Following the death of her husband, Wolf, in 1951, the topics of loss, anxiety, loneliness and separation infiltrated her work. During those painful years Schwabacher’s abstract paintings were searching through the personal traumas, remembered experiences and fear of isolation.

YVONNE THOMAS (1913 – 7 August 2009) was an abstract artist known for blending the intuitive freedom of expressionism with the symbolic language of form and colour. As she stated: “variations on these two movements have continued and merged into a sense of adventure and invention.” For Thomas, colour was the “strongest joy and enigma,” and she used an expressive range of pigments in works that progressed logically in series, often conveying her emotional responses to the spirit of nature. Dedicated with serious focus to art from the late 1930s until her death at age 95, Thomas was one of few women to be part of the first-generation of Abstract Expressionists. A member of the intimate inner circle of artists who were at the heart of the movement, she attended the historic Subjects of the Artist School (1948–49) and was invited to join The Club. She exhibited in prominent galleries of the day—including Stable, Tanager, and Betty Parsons—and was represented in all five of the New York Paintings and Sculpture Annuals (held in a temporary gallery on New York’s 9th Street) as well as the seminal 9th Street Exhibition of 1951.