Coinciding with the opening of pan-European art biennale Manifesta 12 in Palermo, internationally acclaimed artist Avner Sher takes over the central historical location at the Monumental Complex of Steri, Sala delle Verifiche, and the adjacent courtyard. The artist and architect turns to the urgent topics of migration and refugees with this extensive and timely solo exhibition comprising of wall-based works and large scale sculptural outdoor installations.

As a temporary and site-specific installation Bridge Palermo Jerusalem creates an artistic dialogue with Palermo as a changing city, reflecting on ruptures and fault lines in culture, politics and history and invites the viewer to both critical reflection and quiet contemplation. Avner Sher’s work seeks to decode the present, to observe meeting points at which civilisations collide in an avalanche of beliefs, despair, and hopes. His oeuvre contains images of gestures, emotions, body and domesticity, urban space and architecture in a primordial language that transcends cultural differences and celebrates symbols, traditions and myths. His artwork is both universal and individual, suffused with the artist’s own biography, yet offering viewers a map of the inner layers of the world in which we live, its origins and yearnings. 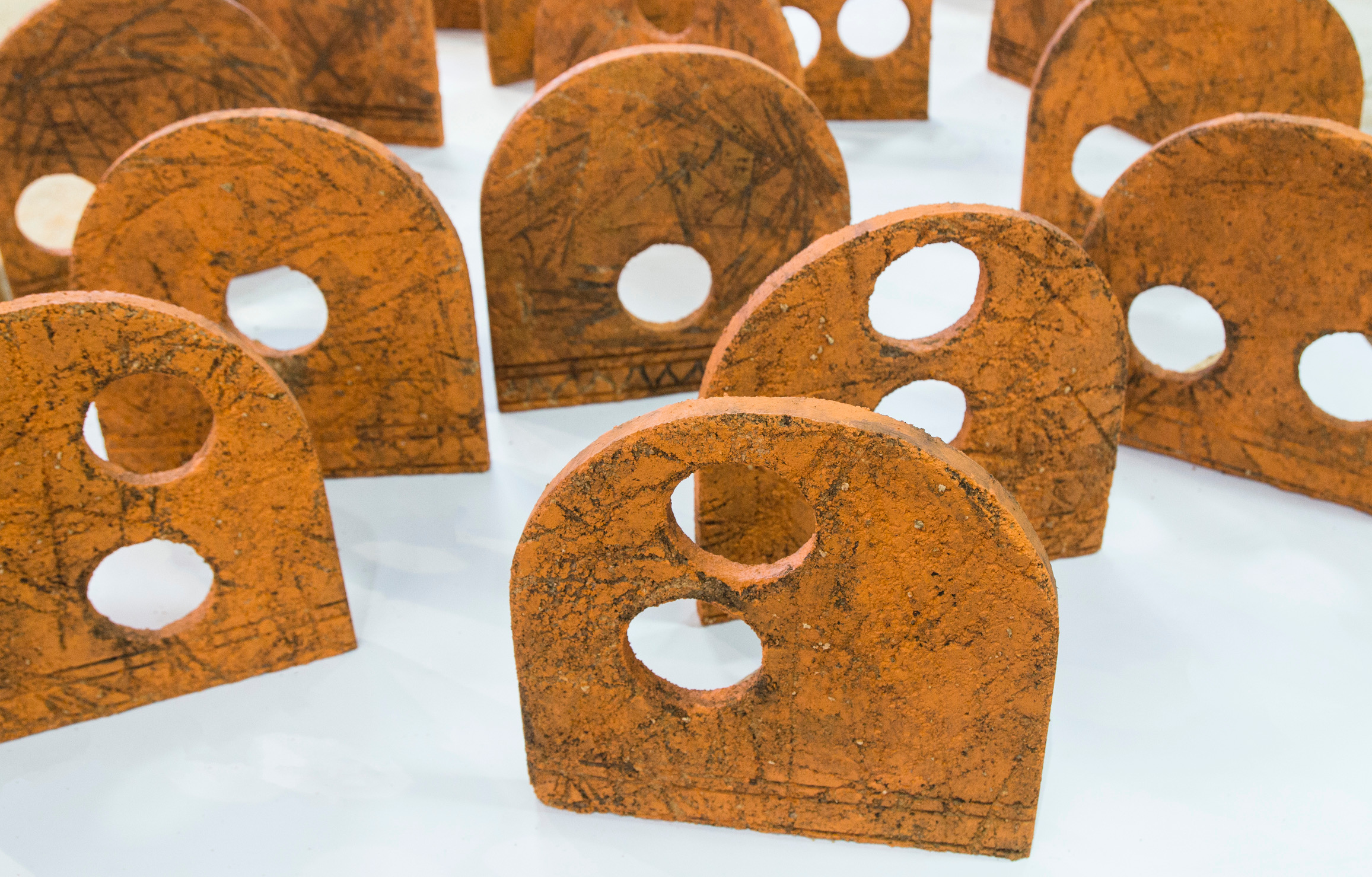 Bridge Palermo Jerusalem takes on universal questions against the background of the city of Palermo as multicultural place, and speaks of appropriation and power, thus addressing contemporary issues without being time-bound.
Palermo, the capital of Sicily, boasts a rich history. In the 8th and 7th centuries BC, it was a trade centre between Phoenicians and Greeks and Carthaginians. Later it prospered under the Roman and then the Byzantine empires. This period was followed by the Moslem conquest and religious tolerance that ended with Norman rule. Until Sicily became part of the Italian kingdom it was ruled by different European kingdoms, each one infusing it with its culture and style. The city was severely damaged in World War II. Today the city finds itself at the heart of an European migration crisis.

Avner Sher’s art is deeply rooted in his architectural practice, yet gravitating away from a merely urban and architectural approach or aesthetic. His works are developed in elaborate and physically demanding processes of injuring, scratching, etching, engraving and scorching large scale panels of varying materials including cork and wood. Sher’s art is universal and embracing in its nature. His works combine pre-historic elements with child-like symbolism and style, where the trained eye of the professional architect meets the freshness and joyful embrace of an autodidact and outsider artist.

In his work, the artist makes bold, sometimes ironic use of symbols. Four obelisks, two red and two black, soar in the courtyard like pillars encapsulating the story of the current cultural juxtaposition in Palermo. Obelisks, originally symbols of military triumph in ancient Egypt, were taken to the West as colonialist spoils. The artist carefully navigates the symbolic space between meaning and history: two red obelisks, bearing images referring to the myth of creation, stand like the Tree of Knowledge of Good and Evil and the Tree of Life. Two black obelisks refuse to be deciphered by the untrained eye, inscribed with African symbols which have been appropriated albeit a purposeful lacking of understanding of its originally underlying meaning in traditional African cultures. 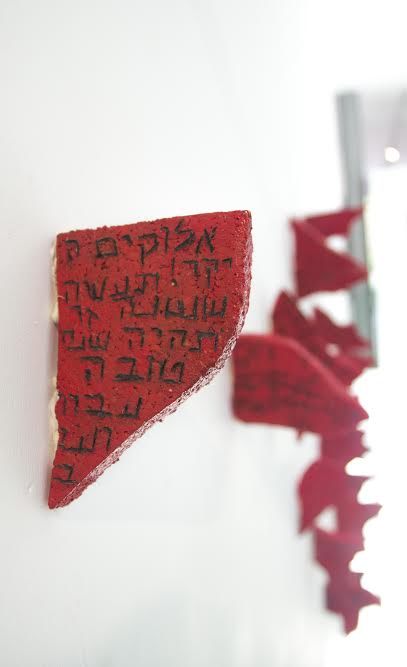 Elsewhere in the exhibition the viewer is confronted with pain and injustice. The ground is dotted with small pieces of dark coloured wood, appeals for help in African languages, reminiscent of notes written by drowning refugees. The artist’s works become a stark echo of the despair of those in political existential limbo.

As a son of Holocaust survivors, the nightmare of being outcast, persecuted and refused asylum are all too vivid to the artist. His choices of material – cork – carries and denotes reflections on the present. It is the external bark of the cork oak tree, peeled off the trunk once every nine years. The trees are not only in a constant process of regeneration and growth, but also in repeated trauma. The use of cork began as an aesthetic preference and became a deliberate reference to the essential nature of cork as bearing its history and a regenerative capacity. Sher treats the material aggressively: he etches, scorches, burns and floods the cork with colour from unusual sources such as wine, laundry detergent, ink, and ketchup, thus creating an archaeology and history for the material. The texture obtained is reminiscent of tortured flesh.
Large pieces of thin cork sheets resembling skin and parchment are printed, engraved, embossed and written on by hand. Although small parts of the text may be read, it is precisely the disturbing quality of an illegible text that amplifies the confused nature of the present.

Finally, a huge piece of latticework is Sher’s interpretation of a mashrabiya, a type of projecting window commonly enclosed with carved wood and geometric patterns or cut-outs, an element of traditional Arabic architecture. Motifs of inclusion and exclusion are used here and shed existential questions that haunt life in a city in constant struggle to define its character. The architectonic component is taken here as a symbolic semi-permeable membrane that may bring balance, equalise opposing cultures and set of interests that kindle unrest. Its beauty and power suggest the multiple opportunities and dangers in the current fork in the road of history to convey to viewers the urgent need to consider new possibilities, to exit the present vicious cycle of war, immigration and deportation.