This Autumn Fondation Louis Vuitton will present two of the most full on artists of the 20th Century Egon Schiele + Jean-Michel Basquiat.

From opposite ends of the 20th century, and opposite sides of the world, the lives and works of Egon Schiele and Jean-Michel Basquiat are fascinating for their fleetingness and their intensity. Both died aged 28. In under a decade, they became major figures in the art of their century. They are linked by their destiny and their fortune, that of a short-lived body of work, the impact and permanency of which have few equals. 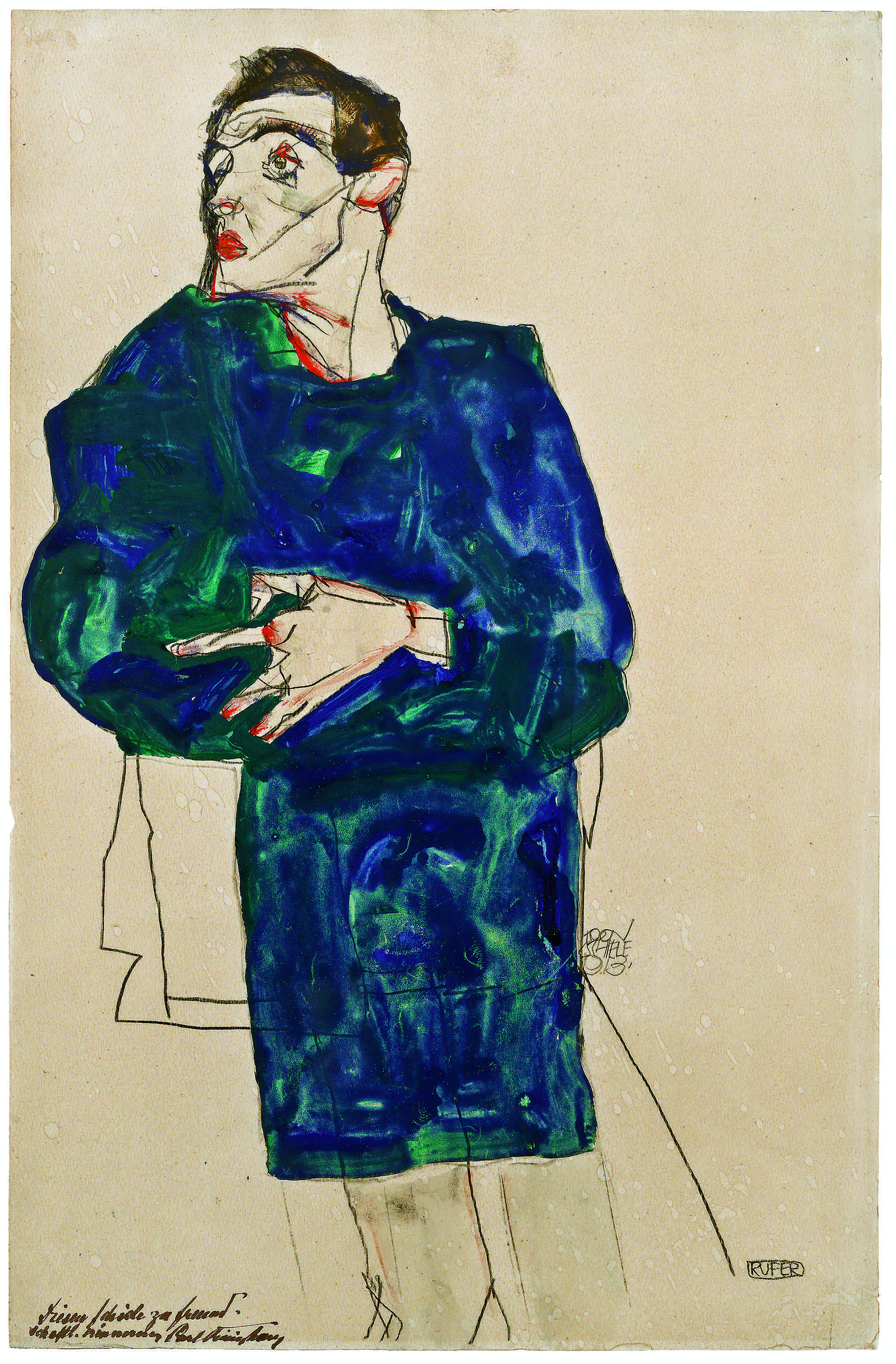 Their formidable output can be explained by their passion for life which today, in the 21st century, has made them real “icons” for new generations. The vital necessity of art is the main element in these two exceptional bodies of work.

“I will get to a point where one will be alarmed by the greatness of each of my ‘living’ works”, wrote Schiele. Breaking with the academic system, he rejected previous models. For him “there is no modern art, but rather there is only one art that is eternal”*.

For its part, the work of Jean-Michel Basquiat, first painted on walls, cannot be understood separately from the protest which animates it, the will to disrupt the established order and escape from canons and hierarchies. “Royalty, heroism and the streets” were Basquiat’s subjects for his art. Presented separately in two different sequences, these exhibitions respect the specific context of each body of work, two moments which were as rich as they were different from each other.

For Schiele, the moment is Vienna in 1900, the capital of the Austro-Hungarian empire, a leading centre of intellectual and artistic life marked by the Secession, the jugendstil and the birth of an effervescent intellectual and artistic modernity. For Basquiat, New York in the early 1980s, with the vitality of its underground scene, urban downtown culture, and questions relative to art and identity.

In their uniqueness, these two presentations are in line with one of the Collection’s four themes: the subjective and expressionist vision of the artist. As Suzanne Pagé remarked, “Through the permanency of the portrayals, the two exceptionally intense bodies of work dazzlingly and irreducibly translate a deep and deeply incarnated distress, by means of a particularly striking line. With Schiele, a distorted and tortured line raises worrying questions and dares to express crude sexuality by way of implacable introspection and the harsh gaze he trains on himself and on his models, with whom he identified. The premonition of tragedy is everywhere.

With Basquiat, a line infused with youthful impetus and carried by real rage aims to impose the presence
of the black figure, following the artist’s painful realisation of its absence in the world of art, and particularly in museums”.

With Egon Schiele, it is the first time that the Fondation Louis Vuitton has dedicated a monograph to an “historical” artist. It is also the first time that it has hosted a exhibition of this size devoted to a single artist, Jean-Michel Basquiat, a strong presence in the collection. The Fondation thereby reiterates its will to anchor its commitment to current creation in a historical perspective.

Egon Schiele (1890-1918)
Egon Schiele’s work is indissociable from the Viennese spirit of the early 20th century. In just a few years, his drawing emerged as one of the peaks of expressionism. At odds with the Academy, which he entered precociously, he founded the Neukunstgruppe in 1909 and, thanks to Gustav Klimt, discovered the work of Van Gogh, Munch and Toorop.

From 1911, in relative isolation, he concentrated on his own work, which is fascinating for the distortion of bodies it depicts, the introspection, the frontal expression of desire and the tragic feeling of life. Before he was struck down by Spanish influenza in 1918, the artist had created some three hundred paintings and several thousand drawings over the course of ten years.

As the first monograph of Schiele in Paris for 25 years, the exhibition includes works of the highest order, such as “Self-Portrait with a Chinese Lantern” (1912), on loan from the Leopold Museum (Vienna), “Pregnant Woman and Death” (1911), from the Národní gallery (Poland), “Portrait of the Artist’s Wife Seated, Holding Her Right Leg” (1917) from the Morgan Library & Museum (New York), “Standing Nude with Blue Sheet” (1914) from the Germanisches Nationalmuseum, Nuremberg, “Seated Male Nude” (1910) from the Neue Galerie New York, and “Self-Portrait” (1912) from the National Gallery of Art, Washington.

The exhibition brings together some 120 works – drawings, gouaches, and paintings – over more than 600m2, in the pool-level galleries (Gallery 1). It is organised chronologically across four rooms, following the concept of line and its development in the artist’s work. Dieter Buchhart explains his choice in this way: “Very few artists have approached line and drawing with the same virtuosity and intensity as Schiele. […] By evolving from the ornamental line towards the expressionist line, combined, in three dimensions, fragmented and amputated, he enabled a borderline dissonant and divergent experience of the line as a sign of human existence.”
The exhibition’s four chapters are entitled: The Ornamental Line (1908-1909) ; The Existential Line of Expressionism (1910-1911), The Physical Balance of the Combined Line at the Dawn of the First World War
(1912-1914), and The Amputated, Fragmented Line during the War Years (1915-1918). 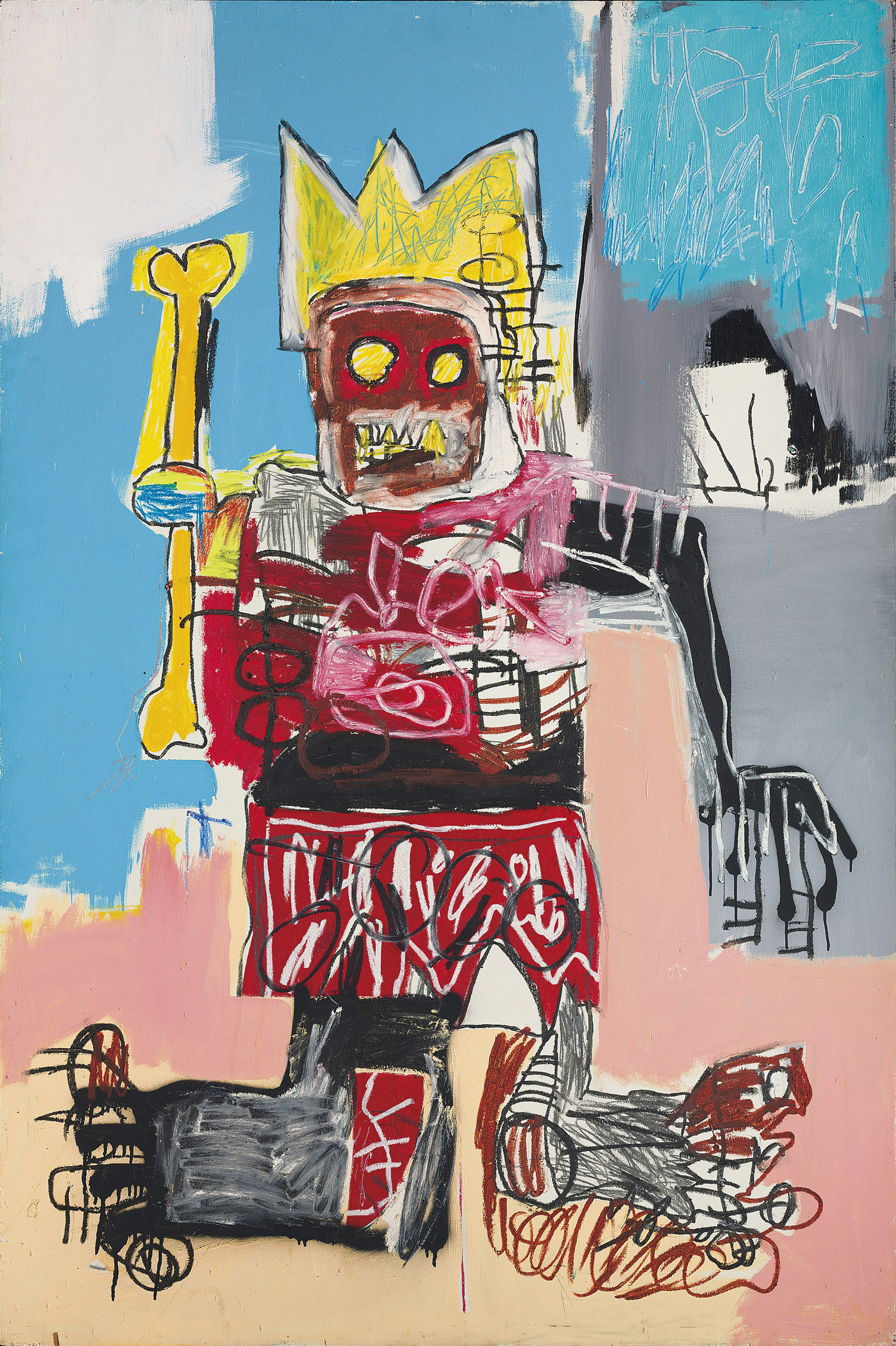 Jean-Michel Basquiat (1960-1988)
The work of Jean-Michel Basquiat, one of the most significant painters of the 20th century, is spread over four levels of Frank Gehry’s building. The exhibition covers the painter’s whole career, from 1980 to 1988, focusing on 120 defining works. With the Heads from 1981-1982, gathered for the first time here, and the presentation of several collaborations between Basquiat and Warhol, the exhibition includes works previously unseen in Europe, essential works such as Obnoxious Liberals (1982), In Italian (1983), and Riding with Death (1988), as well as paintings which have rarely been seen since their first presentations during the artist’s lifetime, such as Offensive Orange (1982), Untitled (Boxer) (1982), and Untitled (Yellow Tar and Feathers) (1982).

At a young age, Jean-Michel Basquiat left school and made his first studio in the streets of New York. Very quickly, his painting achieved great success, which the artist both sought out and felt subjected to. His work refers to the eruption of modernity, that of the expressionists, but his influences are numerous. The acuteness of his gaze, his visits to museums, and the reading of a number of books gave him a real sense of culture. Yet his gaze was directed: the absence of black artists being painfully evident, the artist imposed the need to depict African and Afro-American culture and protests in equal measure in his work. Basquiat’s death in 1988 interrupted a very prolific body of work, carried out in under a decade, with over one thousand paintings and even more drawings.

The exhibition is spread over nearly 2500m2. It is organised chronologically, but also by groups of works which define themes and invite comparisons. For Dieter Buchhart,

“The exhibition follows his work, from the first drawings and monumental works to the later prints, collages and assemblages, shedding light on his inimitable touch, use of words, phrases and enumerations, and his recourse to concrete hip hop poetry. To the image of the Afro-American man threatened by racism, exclusion, oppression and capitalism, he opposed warriors and heroes.”.