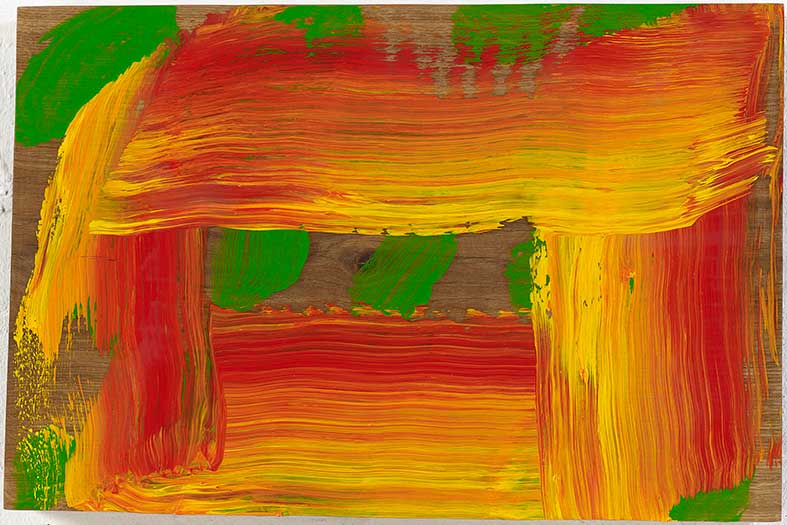 Gagosian are showing an amazing exhibition of Howard Hodgkin’s final works entitled Last Paintings.
One of Britain’s most celebrated contemporary painters, Hodgkin composed powerful, expressive works that, while nominally abstract, bring representation, gesture, and affect into urgent relation. Last Paintings, presented at the Grosvenor Hill gallery in accordance with the late artist’s wishes, includes the final six paintings that he completed in India prior to his death in March 2017, five of which will be exhibited for the first time. The exhibition includes more than twenty other paintings never before exhibited in Europe.

In 1972 Hodgkin renounced working on canvas in favor of wooden panels and frames, some new and others sourced secondhand in India and Europe. The grain of the wood and the scars and scratches of the supports became integral to the paintings, affirming their physical presence and heft. Last Paintings attests to the immediacy of Hodgkin’s methods, as well as his intuitive understanding of the relationship between hand, eye, and memory.

In Hodgkin’s oeuvre, the legacy of British Romantics such as John Constable, J.M.W. Turner, and Samuel Palmer is palpable in his expressionistic colors, landscapes that bridge representation and abstraction, the sense of time’s passage, and with it the inherent transit of patterns both meteorological and emotional. The earliest work in the exhibition, And the Skies Are Not Cloudy All Day (2007–08) is nearly three meters in width, and painted on unprimed plywood. The title invokes the connection between nature and the human temperament, allowing their respective fluctuations to unfold gradually as though over the course of an entire day. On closer inspection, the grain of the plywood beneath its green paint emerges as a faint rhythmic pulse.

Toward the end of his life, Hodgkin applied fewer layers of paint to his panels, leaving more of the wooden support exposed, in visible dialogue with the paint. Now (2015–16) embodies an interchange between light and dark, time and feeling, where the natural streaks of the wood are left bare.

As Hodgkin’s urge to substantiate what is essentially transient became ever more pressing, his art became less about retrospection or the remembrance of images past. His final large-scale painting, Portrait of the Artist Listening to Music (2011–16), previously seen only in his solo exhibition Absent Friends at the National Portrait Gallery (London, 2017), exemplifies his focus on the intangibility of thoughts, feelings, and fleeting private moments. The layered greens and yellows of Don’t Tell a Soul (2016) seem to evoke an explicit recollection or excitation in rapid brushstrokes applied to the lower right corner of the support.

Hodgkin fully embraced the use of time as a compositional element. His paintings were often painted over months and years, the brushwork itself the final definitive step in long processes of reflection and deliberation. In images that deliquesce and resolve themselves before the viewer’s eyes, Hodgkin makes material the irresolute dynamics of time and emotion, and the glancing, immaterial qualities of daily experience.

Hodgkin was made CBE in 1977, knighted in 1992, and made a Companion of Honour in 2003. He was awarded the Turner Prize in London in 1985, the Shakespeare Prize in Hamburg in 1997, an honorary DLitt by the University of Oxford in 2000, and the first Swarovski Whitechapel Gallery Art Icon award in 2014.

Gagosian has represented Hodgkin since 1998 and has presented numerous exhibitions of his work in Europe, the United States, and Hong Kong.