Charlotte Amelia Poe is the winner of the inaugural Spectrum Art Prize, presented at the Saatchi Gallery, London. Charlotte will receive a £10,000 prize to fund her artistic development, plus invaluable professional mentoring, curatorial and PR support. The Spectrum Art Prize is a new national award created to celebrate the excellence of artists on the autistic spectrum. 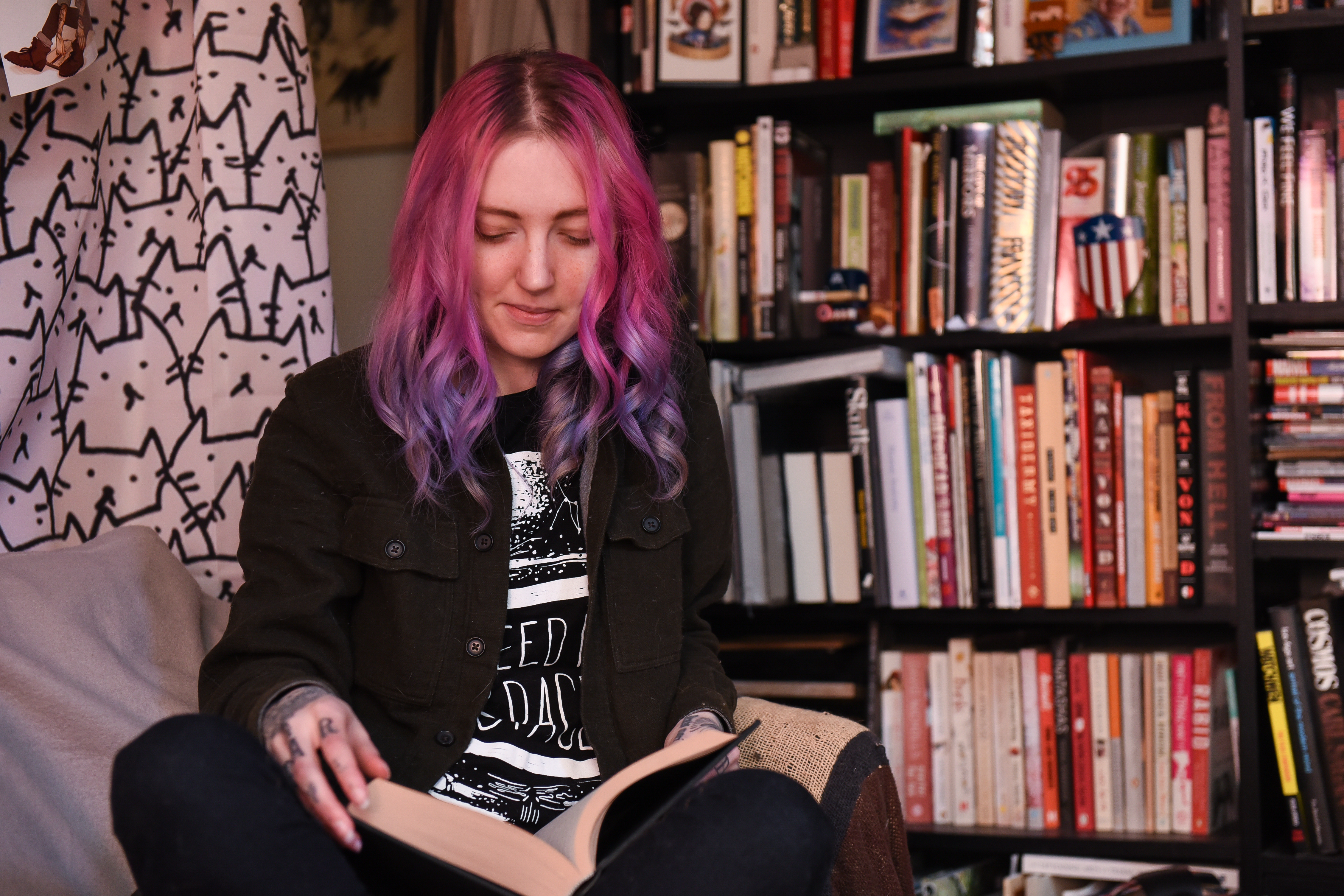 Charlotte’s submission, a film titled ‘How to Be Autistic’, was selected from open submission by an
expert panel including Mark Wallinger, Richard Billingham, Charming Baker, Sacha Craddock, Spectrum CEO Mary Simpson and guest judge, Professor Simon Baron Cohen. The film addresses Charlotte’s experience of living with autism. Charlotte’s film can be viewed below:

“The film ‘How to be Autistic’ by Charlotte Amelia Poe is a calm and forceful description of personal experience. Using a sophisticated knowledge of the structure of film, Poe gives a strikingly eloquent account of lived hell and ultimate triumph. The artist’s ability to tell and explain, the particular quality of projected openness makes an experience that is both generous and able to provide hope.The use of film as confessional is not new, but the power with which Poe speaks, her ability to be both inside the condition of autism and outside in order to give advice, makes this a unique artistic achievement.”

We managed to ask Charlotte some questions about winning the prize and her plans for the future:

1. How do you feel winning this prize might help your artistic practice?
Spectrum has given me a huge opportunity to pursue art and writing in a very real way now, as well as the motivation, and indeed validation I think we all search for. They’re offering me so much support which means hopefully I’ll be able to make a real difference, not just with my work but within the autistic community as well.

2. When did you realise being an artist was a thing?
The greatest gift my parents ever gave me was teaching me to read at a very, very young age. I was never without a book in my hand, and that inspired my love of words and writing, which I’ve never lost. My dad’s a musician as well, so I always grew up surrounded by creativity. I’m extremely lucky that my parents have always supported and encouraged art and writing, and I think I definitely get a lot of it from them. The idea of being a professional artist, or indeed, writer – that always seemed like an amazing pipedream, but now I feel like it could become a reality!

3. Can you tell us a bit about your winning work?
My work is entirely autobiographical, and I wanted it to be. I didn’t want to hold anything back, in fact when I’d completed it and submitted it I didn’t show it to anyone I knew because it did feel so intensely personal. Even watching it back now I still feel the same emotions I felt writing and recording it. It’s not just my struggle, it’s the struggle of thousands of autistic people out there, and I wanted to get that across. There simply isn’t enough out there to help people with autism, we have awareness, that’s touted a lot, but I think we need to take a step beyond that now and start actively pursuing what we’re going to do next. We need to start treating autism like any other disability, it may be invisible, but it can be as debilitating as any other, and incredibly isolating, and if my film says anything, I want it to say “You are not alone”.

4. What’s next for you?
I want to write a book, expand on the film in a very real way and hopefully reach more people that may not necessarily be into art but might pick up a book on a shelf on the off chance. I’m also hoping to work closely with Spectrum to hopefully get the message out there and help people who, like me, did not receive the help they should have, and people who may not even be diagnosed yet and need recognition and support. This has opened so many doors for me and I’m so, so excited. I’ve never been more motivated in my life. My motto has always been to ‘create something beautiful’ and I really hope that now I’ve achieved that.

About The Artist
Charlotte Amelia Poe (1989) is a self-taught artist from Suffolk, working with video and film. For Spectrum
she submitted How To Be Autistic, a film from the rarely seen point of view of someone with autism. Her
work challenges narratives of autism, created by neurotypical people, as something to be ‘fixed’. Charlotte
states, ‘neurotypical people are writing about us, with an idea of how to fix us. I want to make people who
care for autistic people understand. I want to be a resource for people to say you are not on your own.’

‘I wanted to show the side of autism that I have lived through, the side you don’t find in books and on Facebook groups. My piece is a story about survival, fear and finally, hope. It is an open letter to every autistic person who has suffered the verbal, mental or physical abuse and come out snarling and alive’

About Spectrum
Spectrum is the South West’s leading charity for autism services. It provides residential care for both
adults and children, education and domiciliary care services for people with Autistic Spectrum
Disorders. The Spectrum Art Prize has evolved from the charity’s long association with the arts
and has been conceived as a platform for artists with autism to have their work exhibited at
the same level as any other artist, without barriers or prejudices.
www.thespectrumartprize.co.uk