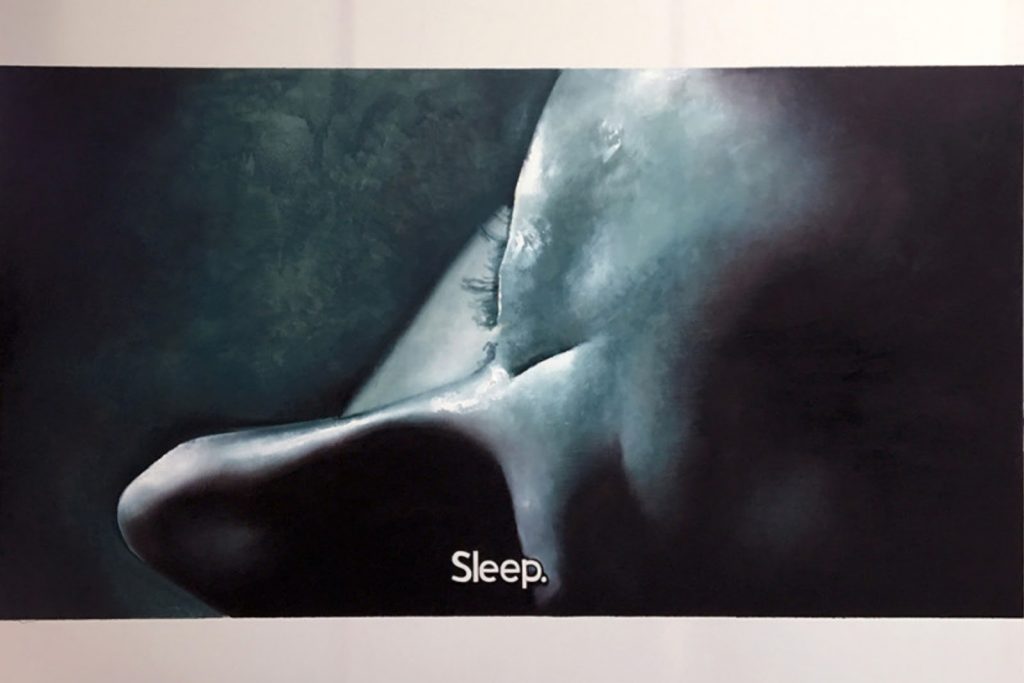 The starting points for Sasnal’s latest paintings include his own photographs, the internet, newspapers, film stills, found photographic portraits and historical works of art. Their disconnected subjects speak of multiple (sometimes competing) perspectives – fragments of the artist’s everyday life, self-conscious glances at historical paintings, political commentary, or impersonal facsimiles of documentary photographs. Throughout their shifting contents and implied modes of viewing, Sasnal’s paintings share a sense of spatial and temporal wandering. They possess a connective thread that is literalised, in many cases, in the shape of a meandering line, as fitful and fluid as the progression of a dream.

In certain paintings, this line unfurls across the image as a graphic metaphor. One work shows Rohingya refugees fleeing Myanmar in 2017, with a diasporic system of trails winding beneath their feet. In another, rope-like lines emerging from a minaret represent the soundwaves of the call to prayer. Elsewhere, the line transmutes into an object, such as the branches of silhouetted trees, or a motorway junction viewed from overhead and yet emptied of vehicles or surroundings so as to become a nexus of blank roadway and blue shadow. Crouching red figures on a grass bank – based on Henri Matisse’s Music (1910) – are caught up in a snaking pair of black lines, loosely evoking the celebrated ancient sculpture of Laocoön and his sons strangled by a sea monster.

In this way, art history itself winds through and structures – or occasionally affronts – the imagery of Sasnal’s paintings. In some works, he directly and meticulously transcribes an historical image, such as the daisy chain of red figures in Matisse’s The Dance (1909), although the act of appropriation is betrayed here by the dissolution of the image along one edge. In another work, the medium of macramé is employed to create a hanging panel of ornamental knotted wool – a reworking of Polish folk art. Wandering and retrospection also pervade Sasnal’s latest works at a metaphorical level: vistas of gardens suggest scenes of leisure, contemplation and dilated time – whether in the Matissean scenes of figures on green grounds, or two twilit scenes of fountains based on photographs of the English Garden in Regents Park.

Sasnal’s latest works express his prolonged fascination with the patterns that infiltrate vision and experience. The serpentine lines and transposed motifs of his paintings suggest ways of structuring the world, but also of unravelling specific time and place. Each painting presents a precise yet ambiguous moment, at once vacant and charged with possibility – ‘vague’ in the literal sense of wandering and unfixed. In this there lies an analogy for the unpredictability of painting itself: “I never assume how the painting will look”, Sasnal has stated. “I would rather let it be painted. I don’t want to know the outcome.”

About the artist
Wilhelm Sasnal (b. 1972, Tarnow, Poland) has had solo shows throughout Europe and the USA including those at Lismore Castle Arts, Ireland (2013); Haus der Kunst, Munich, Germany (2012); Whitechapel Art Gallery, London (2011); K21, Düsseldorf, Germany, and Centro De Arte Contemporàneo, Málaga, Spain (both 2009); Wilhelm Sasnal – Years of Struggle, Zacheta Narodowa Sztuki, Warsaw (2008); Matrix, The Berkeley Art Museum, Berkeley, California (2005); and Kunsthalle Zürich, Switzerland (2003). He was included in the XXVI Bienal de Sao Paolo, 2004, and was shortlisted, with four other finalists, for the 2004 Vincent Prize at the Stedelijk Museum, 2004. With Anka Sasnal, the artist has written and directed four feature-length films, Huba (2013), It looks pretty from a distance (2011), Fallout (2010),and Swineherd (2009). A major new book on Sasnal is forthcoming from Rizzoli.