This week I crossed the Atlantic just in time to miss all of New York’s fairs (The Armory, Volta, NADA, Independent…). The city is far from barren though and on my first day I headed towards Chelsea’s galleries for an unexpected celluloid and neon trail, starting with David Zwirner. 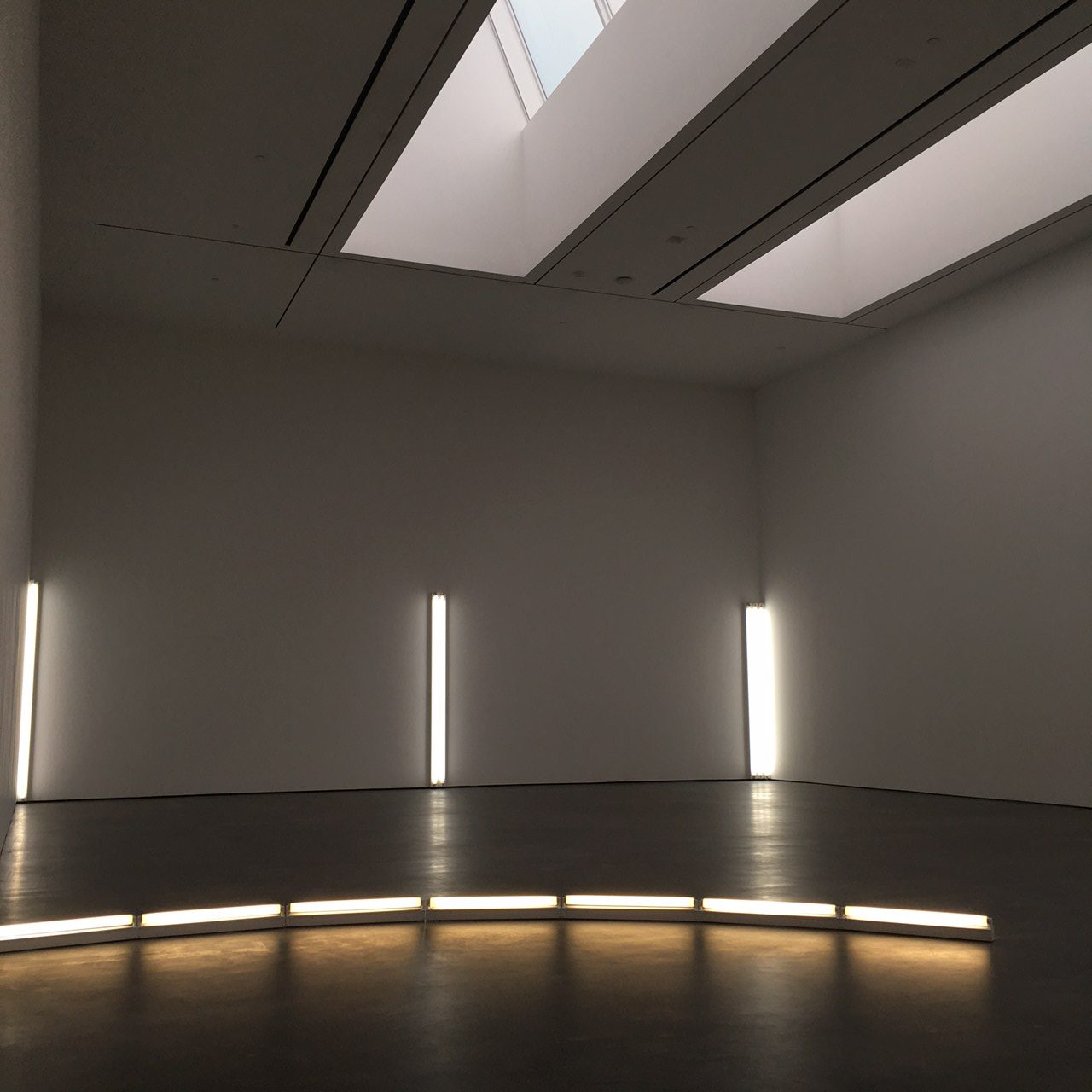 Dan Flavin and New York are so closely connected, it was only natural for David Zwirner to present in daylight or cool white. The exhibit showcases some of Flavin’s earlier works – including his seminal diagonal of May 25, 1963. Whilst Flavin’s later works incorporate colour, the pieces on show display his early fascination with pure white fluorescent light. This allows for visitors to appreciate subtle differences in the coolness of the works, as well as the range of compositions. We find the curved untitled (1964) on the floor of the first room, near Flavin’s homage to the philosopher William of Ockham, the nominal three. In the second room, we see Flavin’s modest use of aluminium in untitled (to Cy Twombly) and in untitled (to Helen Winkler). 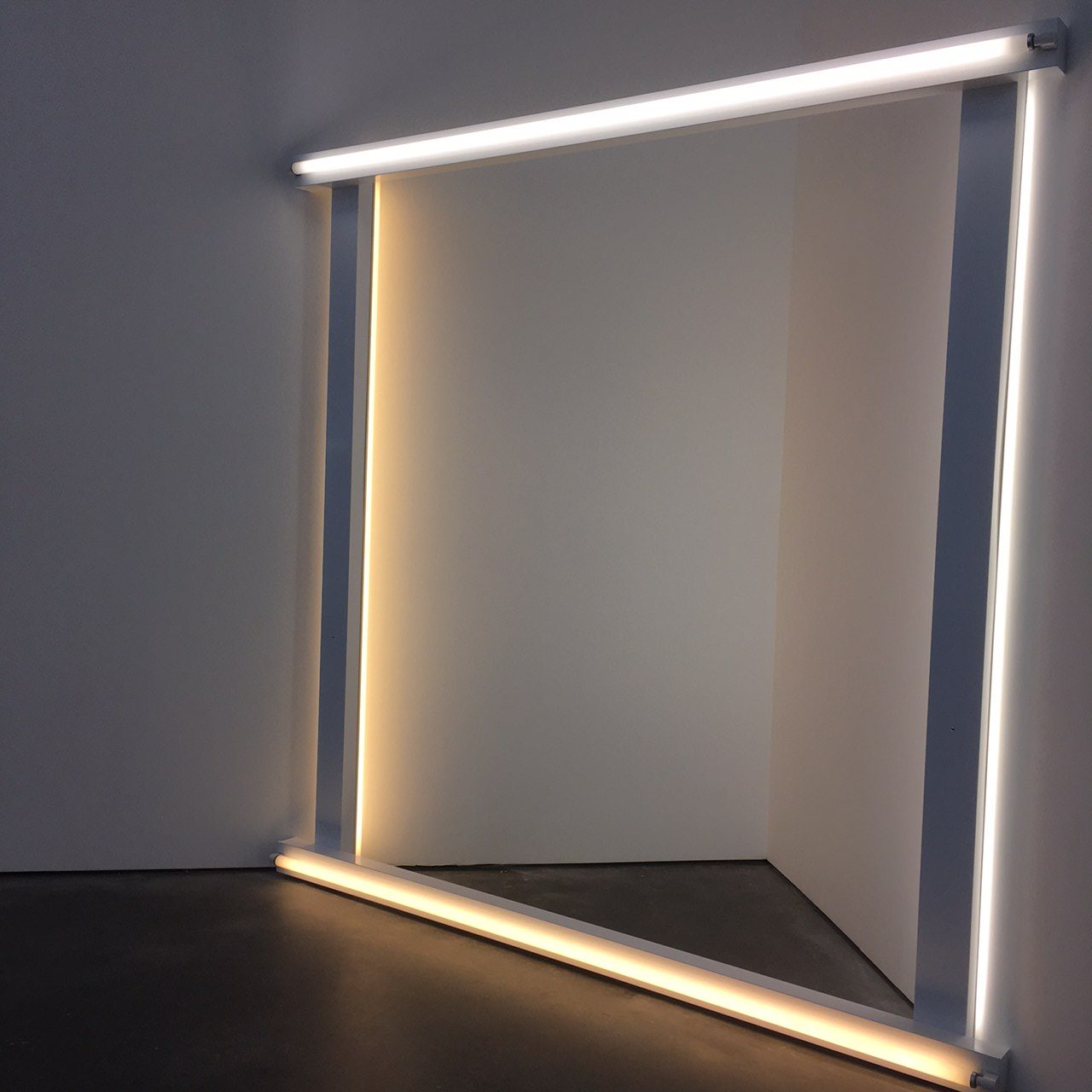 As we approach the third room, the sound of electricity running through the gallery fills the white space with a peculiar energy. This unintentional soundscape adds to the spirituality of Flavin’s monuments for V. Tatlin, the Russian Constructivist.

If Flavin’s use of light has a spiritual aura to it, McBride’s use of green lasers in Particulates – on show as part of Dia:Chelsea’s public programme – makes us enter a sci-fi film scene. 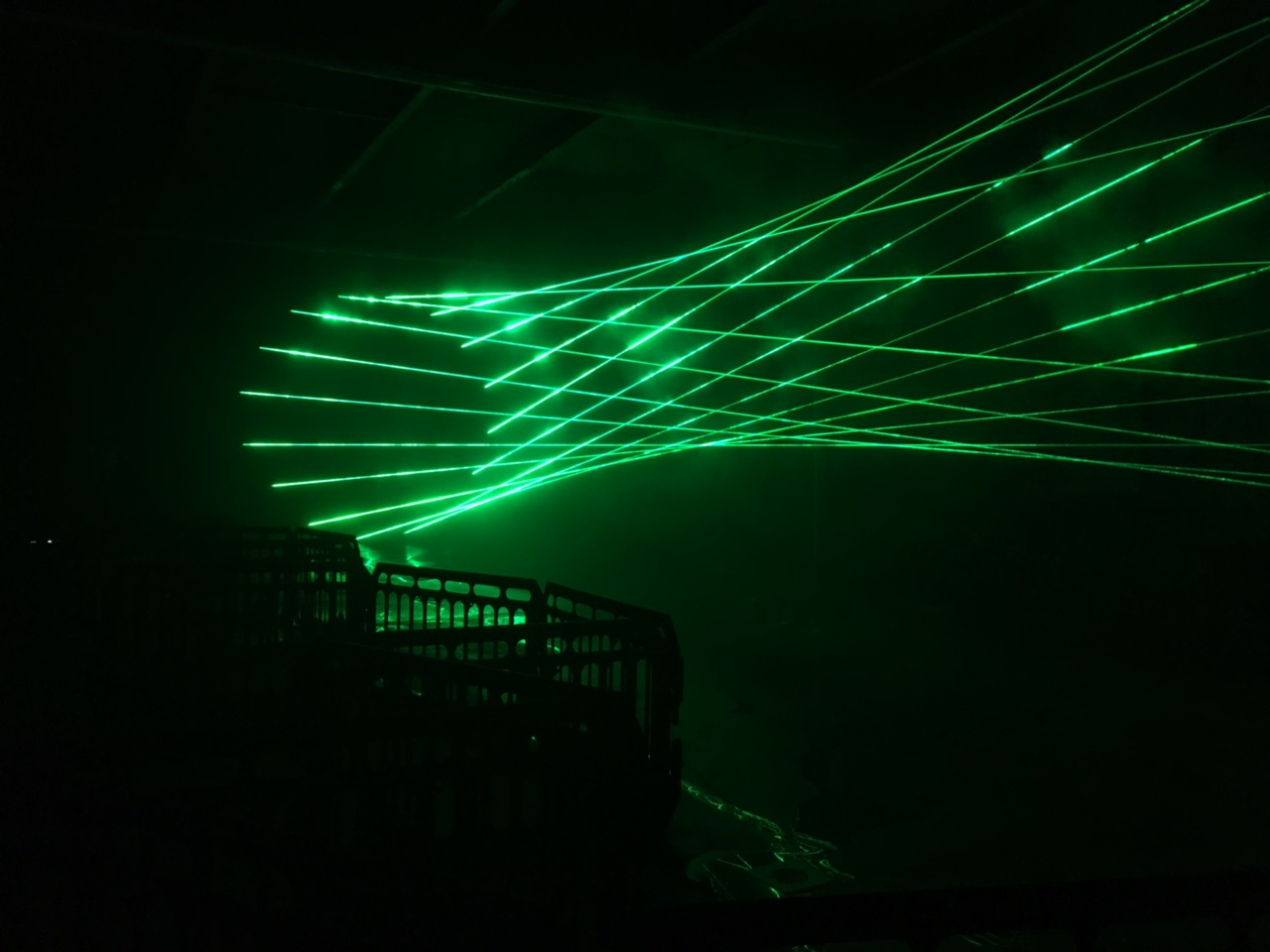 We aren’t quite sure how dangerous the lasers are, what the green light can do, and are protected by a weaving, seemingly improvised barrier, designed by the artist herself. The heavy humidity is noticeable upon stepping into the space, and adds a dense layer of unknown. Fittingly, McBride was inspired by a visit to Dia:Beacon, where she saw Flavin’s untitled (to you, Heiner, with admiration and affection) for the first time. Flavin’s work consists in a series of barriers whose neon lights bathe the gallery and its visitors in an alien green light. As the piece is currently on loan, McBride’s work is a worthy reinterpretation. Particulates is site-specific and McBride’s carbon-fibre barriers, inspired by Flavin’s, assume an aesthetic function by creating a series of shadows and spaces, and a practical one – protecting us from the high-intensity lasers most frequently used for industrial and military purposes. McBride’s interest in science-fiction is far from superficial. The lasers rotate around an axis, but despite this apparent rigidity, dust and water molecules intersected by the beams offer perennial motion. We feel as if we have come across a wormhole, and the space before us becomes an opaque discovery – raising more questions the more time we spend in the humid corridor. McBride sees science-fiction as a means to efficiently suspend disbelief allowing us to engage in conversations where past and future can be exploited to discuss our present society in a non-linear, more freeing way.

Where McBride plays with conflating past, present and future in generating her green fluorescent wormhole, Bruce Conner – whose two films REPORT and MARILYN FIVE TIMES have recently been restored – uses historical footage and imagery to address the media’s ability to construct narratives around two icons of American culture – JFK and Marilyn Monroe. MARILYN FIVE TIMES elicits desire in viewers, as a seductive Marilyn look-a-like poses for the camera, an apple rolling across her body. This is combined with a sense of frustration, as she is often interrupted by a protracted black screen, whilst Marilyn Monroe’s “I’m Through With Love” plays, five times. The objectification of Monroe’s image leaves us with a sense of unease, as we enter a larger space, where REPORT is being screened. 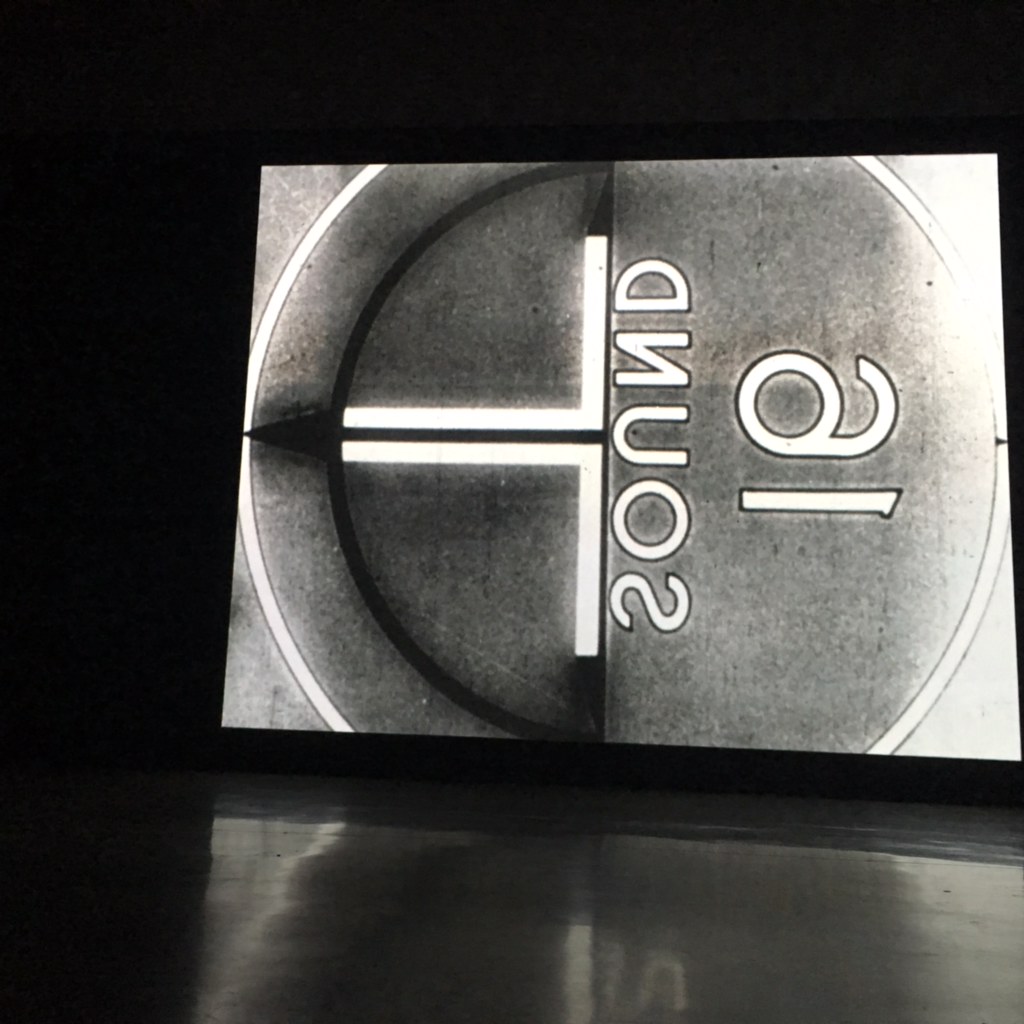 Here Conner delivers an extremely powerful thirteen minutes on the 1963 assassination of JFK. The piece is divided into two main components, although the division is not immediately clear. In the first part we are shown television clips from the day which Conner cuts and repeats, cuts again and accelerates, cuts again and extends. The footage is warped and then intercut with white and black celluloid, creating a stroboscopic effect which dazes and blinds us, representing the gunshots we never see on screen. This is immediately followed by a countdown confirming JFK’s death. In the epilogue, Conner uses archival footage of JFK’s arrival in Dallas. By intercutting it with a bullfight – in all its crude brutality – Hollywood films and advertisements for fridges and other appliances he offers an accurate portrayal of the media’s commodification of JFK.

If Conner uses strobe-light effects in his experimental film to confuse and disorientate us, Stan Douglas in his Blackout photographs, on show at David Zwirner, explores the absence of light. Douglas stages and scripts a fictional state of emergency – a power cut across all of New York City in the present day. These images evoke the City’s 1977 blackout as well as the more recent one caused by Hurricane Sandy. Douglas, who frequently uses film as his medium (see Luanda-Kinshasa for The Infinite Mix), presents extremely cinematic renditions of the event. The photographs could easily be stills. We see aerial shots of the city in Loot. 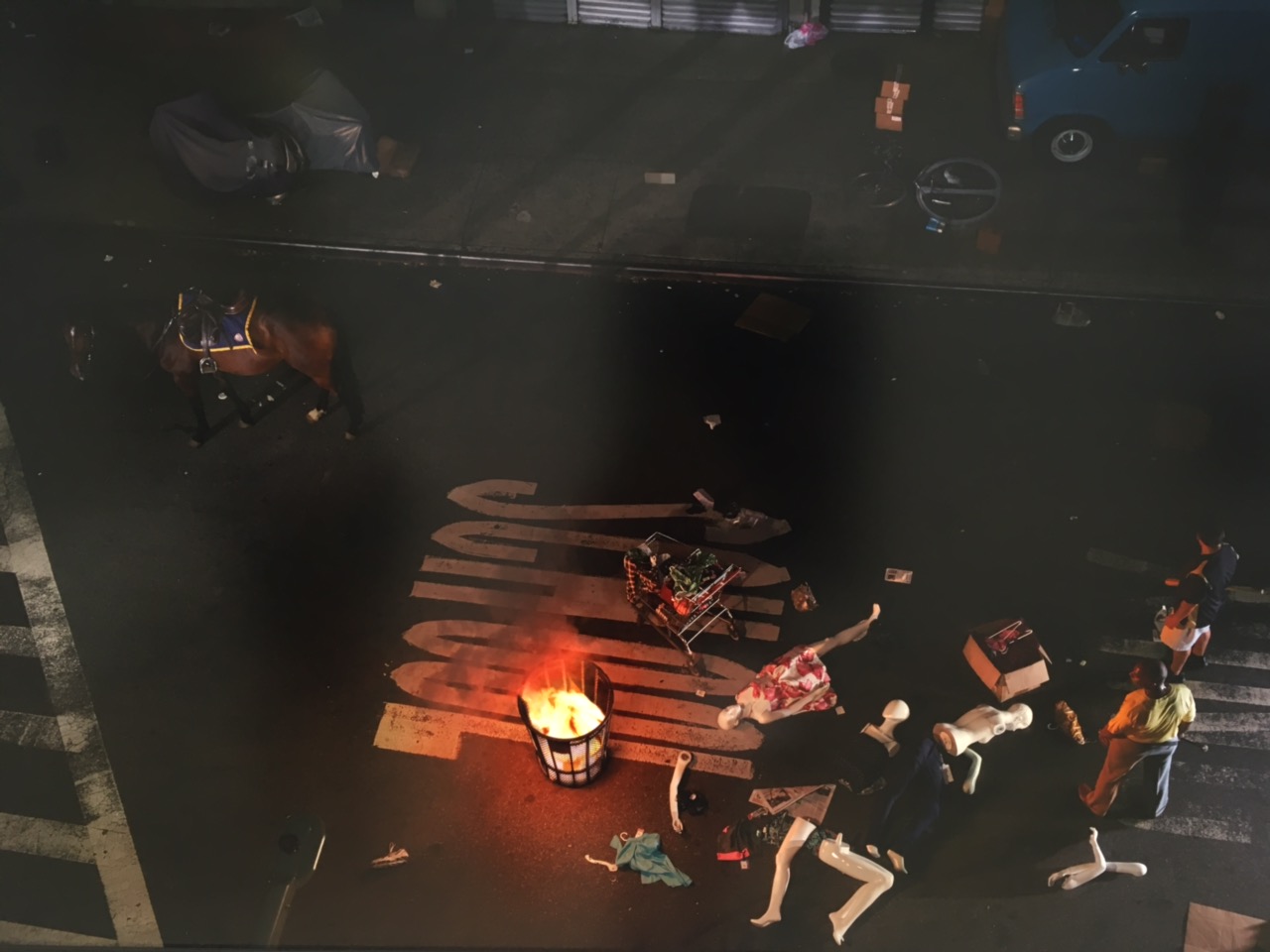 Here scattered mannequins and a solitary horse on the road, coupled with a candlelit glow, add a surreal dimension to the work. In Queue a series of people carry different shoe boxes, bags and devices queuing to walk through a balcony, their brightly coloured clothes making up for the absence of light by providing a luminous array of hyper saturated hues. 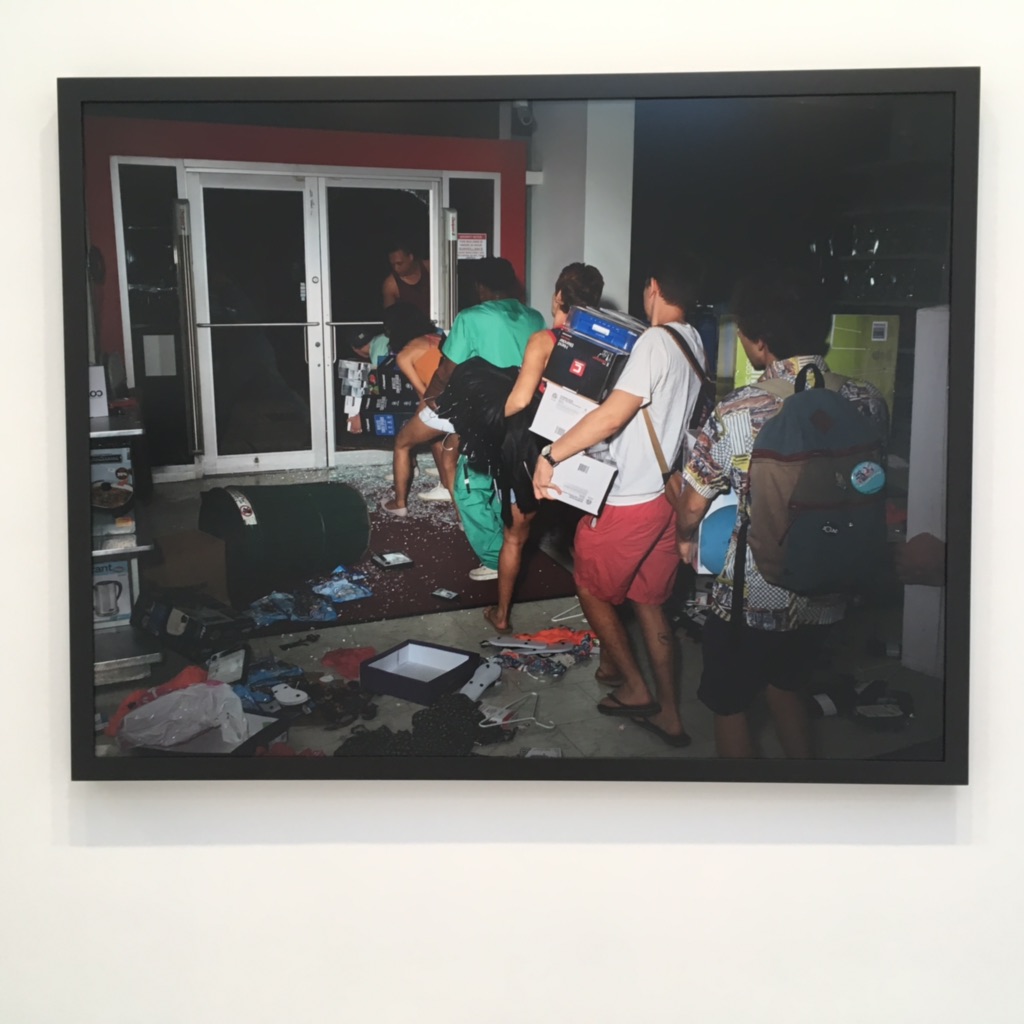 Despite the chaotic disposition of the room, panic is not truly palpable and their positions are not dissimilar to those found at a checkout line in any busy retail store. We also find subtle intimate moments on the staircase in Stranded. Here each character has its own story, the man drinking from a water bottle, sweat dripping on his forehead, someone lying down on his backpack, reading off his phone, two people catching up and passing the time.

For anyone intent on embarking on this highly unstructured neon and celluloid Chelsea art trail, details are below.

Rita McBride’s Particulates is on at Dia:Chelsea until 2 June 2018;

Bruce Conner is on at Paula Cooper Gallery until 17 March 2018;