Catalina Guirado-Cheadle made her name in the 90s as a model and TV celebrity, before moving to Los Angeles where she became a media entrepreneur. In 2010 after the sad death of her artist Father Juan Antonio Guirado, she found herself President of his Estate responsible for maintaining his legacy as one of the most important Spanish Modern painters. Since then Guirado-Cheadle has spent 8 years documenting Guirado’s extensive back catalogue, and setting up exhibitions of his work in the USA and Europe, most recently with a major exhibition at the Coral Gables Museum during Miami Art Basel, which presented a Virtual Reality experience of Guirado’s ‘Intra-realist’ paintings. Juan Antonio Guirado will be featured in a group exhibition alongside Picasso, Miró and Tàpies in ‘Parallel Visionaries’ (‘Visionarios en Paralelo’) at the University of Jaén from 21 March to 24 April. ‘Parallel Visionaries’ is curated by Laura Revuelta, Art Critic, Curator and Editor in Chief of ABC Culture, and Wanda von Breisky, Guirado Estate Curator, with artworks from the Cesareo Rodríguez-Aguilera Foundation and Guirado Estate. 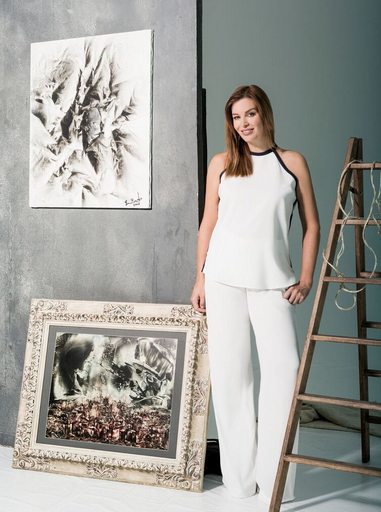 Lee Sharrock: You inherited the Guirado Estate after the death of your Father, Spanish artist Juan Antonio Guirado in 2010. After experiencing such sadness with the loss of your father, how did you set about cataloguing and exhibiting his vast collection of artworks?

Catalina Guirado-Cheadle: Initially the art that I managed to get back from Spain was delivered to our flat in London. Sadly a few works and belongs of my Fathers were stolen from his studio in Spain during his illness but I managed to rescue the most important works. At the time of his illness I didn’t really expect to be in the situation of having to catalogue and do providence on the collection. If I had known I would have paid more attention to what I rescued from his studio after his death. It was difficult as I didn’t know where any of his important documents where kept and basically had a very short time to decide what was useful and what wasn’t. Amongst some of the documents I did take was a press book he had made of all press clippings since his first show in Australia in 1968 through to his last in Spain, 2008. My Mother and I had the painful task of cataloguing over 400 works, which took about a week to do. It was then later on returning to LA that I read the press clippings thoroughly and realized that he had a really successful and academically acclaimed career as an artist with an impressive exhibition history and works in museums, such as the Reina Sofia.

It’s really ironic as my parents separated when I was young and my Mother always referred to him as a struggling artist when in fact he actually was very well known and made his living selling art especially in the 70s. He just decided to get out of the business in the 80s painting and showing within Spain. I decided to invest some money on an exhibition and with the help of friends in the art world in Los Angeles managed to get a gallery that was between shows to kindly lend me the space. I then got the event sponsored, used my rent money to buy frames, curated the show myself and somehow had a huge A list celebrity guest list of art curators, galleries, film stars, collectors etc. The incredible reaction to the art is the reason I decided to continue promoting it as I received the validation I needed to realize I had something worth pursuing, so I took the show to London and repeated the formulae with a two-week exhibition. Everything has snowballed from there, but it goes to show that the product is excellent. You don’t get the level of interest the estate has received from mediocre art. This is a large private art estate with great providence of an artist that was somehow overlooked at the time and deserves to be re examined. Plus there’s also a great back-story here that deserves a film script or a book one day. You wouldn’t believe what I have had to deal with! 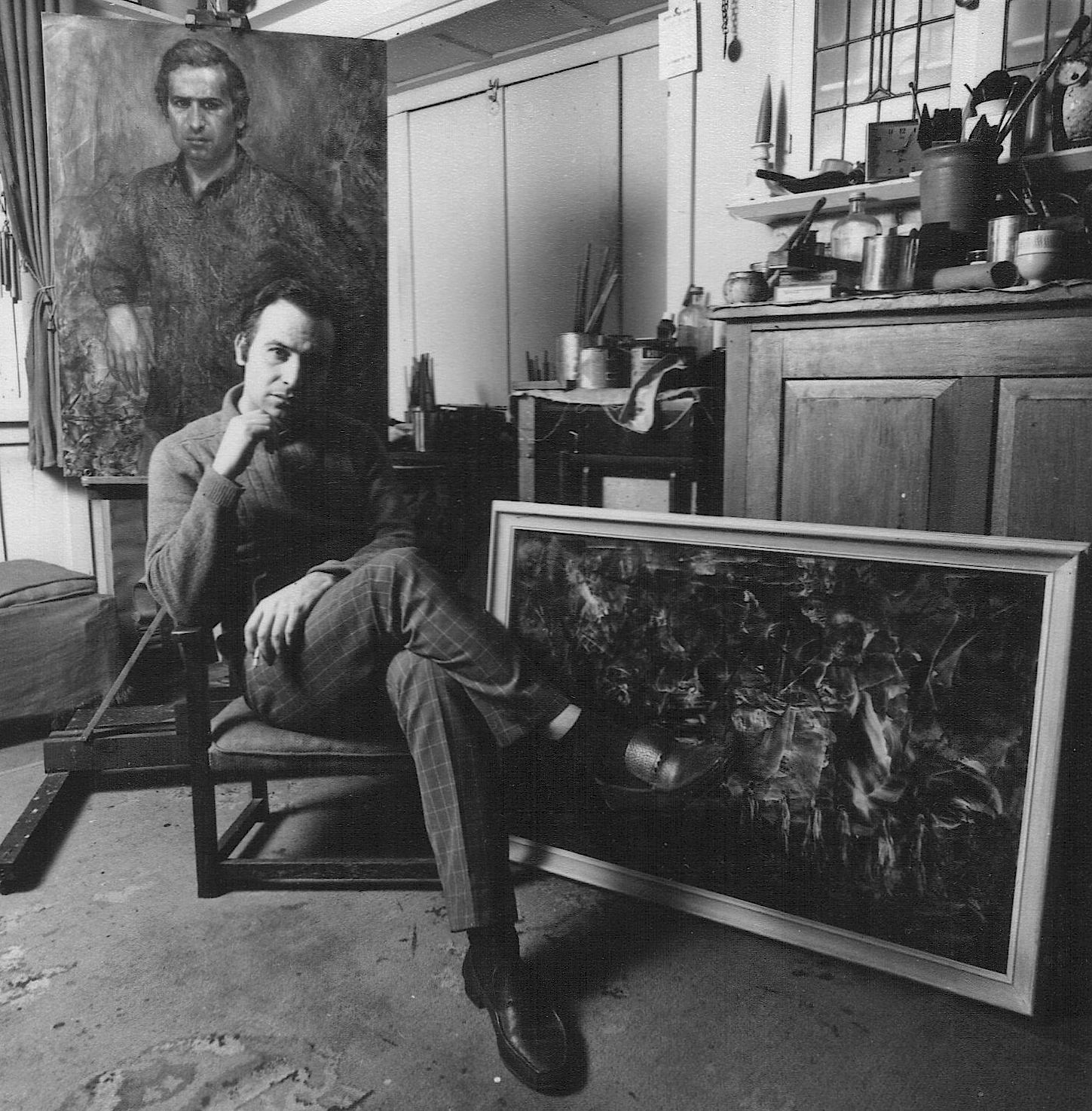 LS: You were a hugely successful model and TV Presenter in the 90s, how was the transition from that world to the art world?

CG: I guess, if you think about it I actually was born into the art world and transitioned out of it. My earliest memories are of his art studio, the smell of paint, attending exhibitions, being around art agents and around other artists. I studied fine art and textile design at school as well as History of Art A level and thought about going to art school to study fashion and textile design but ended up modeling instead. I’ve always preferred being around artists, designers and musicians and grew up in a very bohemian household. When I left modeling and TV I became a business entrepreneur helping set up media companies in the US as well as running boutique PR company for artists and musicians, so I feel that everything I’ve learnt in my life is has contributed to my know how to running the estate and hopefully making it a success. I have been told that I have excellent instincts regarding curation and the handling of the art so maybe I learnt through Osmosis? , they do say children absorb their most important information between 0-3 and I was basically living and breath art during those years. The only real problem I’ve had is that there is quite a lot of snobbery in the art world, especially if you didn’t do a BA at Sotheby’s or Christie’s for example and even more so if you were a model. I did consider doing a course just to prove a point but then decided against it as I could write a book tomorrow on how to run an estate, as frankly there is no better lesson than experience and common sense. Luckily I have been able to surround myself by some incredible top-level art professionals to help advise me as well as having a great estate team. I’ve worked closely with Wanda Von Briskly for the past four years to get us to this point, we make a good team especially at exhibitions as she manages the show and I represent the estate – that’s where the Model/presenter comes in useful.
.

LS: The work of Juan Antonio Guirado will be featured in a group exhibition alongside Picasso, Miró and Tàpies in ‘Parallel Visionaries’ (‘Visionarios en Paralelo’) at the University of Jaén from 21 March. How did you set up the exhibition, which features such iconic Spanish artists?

CG: We were invited by the University of Jaen to participate in their 25th anniversary celebrations and asked if I would consider adding a Guirado to the University collection as they regard Juan Antonio Guirado as academically important as the more iconic Spanish artists. The region of Jaen and Andalusia is where my family is from and he is actually in the encyclopedia of Andalucía as one of the regions master painters. We are lucky enough to have editor in chief, ABC Cultural magazine ES, and top art critic and curator Laura Revuelta to be curating this exhibition of Spanish master artists as well as giving a lecture on their roles in art history. It’s a huge honor for Guido to be considered alongside these artists in historical academic importance. 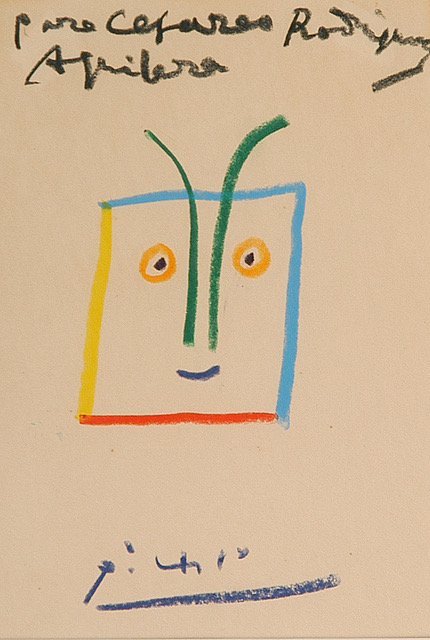 LS: You’ve been on a mission to reaffirm the name of your Father in Art History, and you’ve been bringing his art to an international audience with exhibitions in the US, most recently at the Coral Gables Museum during Miami Art Basel where you presented his work as a VR experience. How did you come up with that concept, and what was the reaction?

CG: Running an estate is a full time job and I think that aside from all the historical providence it’s important to look forward and show the art in a contemporary manner. This can be in various ways such as an exhibition, which shows the arts relevance to society today, (such as 2017’s ‘Environmentalism’ exhibition in Madrid) or for the art to be shown alongside contemporary artists that share similar and interesting themes. Then of course I took it one step further when I was introduced to an amazing VR team in LA. My father has been described over the years as ‘An Artist with an Eye on the Future’, ‘The 21st Century artist’ and a ‘visionary artist’ with themes spanning from environmental issues (long before it was trendy), spirituality, greed etc.

The VR studio, FLOAT, were looking for an artist to work with to interpret the art into VR. After looking through the collection they could see the immense possibilities Guirado’s work held in VR. The art is so multi dimensional in reality that if you spend time looking at it you will see multiple universes in kaleidoscopic layers within the paintings. The art resonates strongly with creative and open-minded individuals and what better way to really expand the mind than through VR. What the FLOAT team has done is create an art installation VR, an artwork within itself. The viewer is inside the art and can float around a space, hovering all over paintings, seeing into the paintings layers and eventually being sucked into a painting in what has been described as a spiritual experience and entering a universe of swirling surreal landscape. It’s pretty trippy! And EXACTLY how my Father would have wanted it to be seen. He was regarded as a visionary and was very open minded so this is could be thought of as THE ULTIMATE Guirado artwork. People are really blown away by it and I haven’t had one negative response. We are in talks with Museums and major VR developers to take this even further, which is very exciting. I really love the VR experience and have many ideas as to how VR and art can be developed. It’s actually something I’d like to explore in depth.

LS: You’re going to be giving a talk in London in April about dealing with an artist’s estate, and bringing a modern artist to a contemporary art audience through Virtual Reality. What plans do you have after the University of Jaen exhibition in March and the talk in April?

CG: I’m very interested in finding the right gallery to partner with and am in major talks with the world’s premier VR teams about taking the art in VR to the next level. It would also be really nice to be able to start a foundation to work with charities that share the concerns of my Father that are reflected in his art. I want this legacy to be used in a positive way to educate and enlighten people.