My Easyfun-Ethereal paintings are very layered. My interest has always been to create art that can change with any culture or society viewing it. When I look at the paintings and realize all the historical references, it’s as if, for a moment, all ego is lost to meaning. 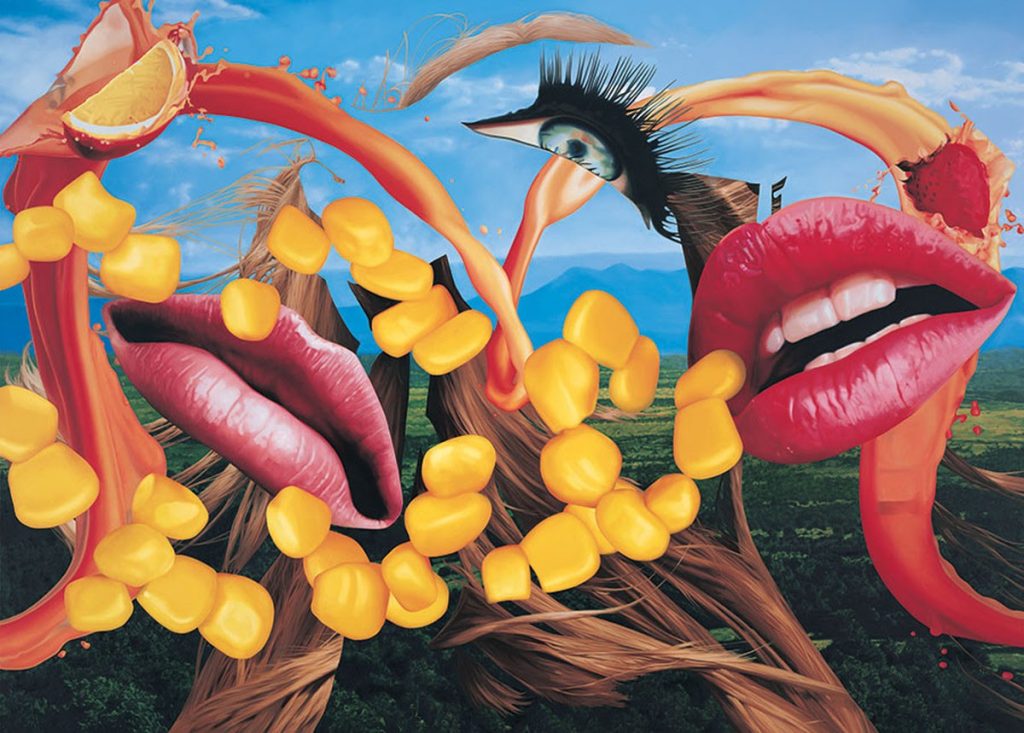 “Easyfun-Ethereal,” will consist of seven large-scale paintings by Jeff Koons, which were first presented together at the Deutsche Guggenheim Berlin in 2000; and Woman Reclining (2010–14), a granite sculpture from the Antiquity series.

The Easyfun-Ethereal series, which eventually expanded to twenty-four paintings, allowed Koons to work more spontaneously, in contrast to the detailed production demands of the Celebration sculptures. Working from computer-scanned reproductions taken from various printed media, as well as his own photographs, he considers the use of gesture, expression, and eroticism in artistic precedents and American advertising. Multilayered yet possessing a classical order, the resulting paintings marry the immediacy of collage with Romantic grandeur.

Koons’s depictions of juice, hair, milk, and cheese suggest the gestural fluidity of Abstract Expressionism, but through highly stylized, illusionistic painting. In Lips (2000), two pairs of lips, swathes of silky brown hair, and a disembodied blue eye float among oversized corn niblets and streams of red-orange liquid, with a verdant South African vista in the background. And in Hair with Cheese (2000), three short bobs in red, blonde, and purple are layered with forest brush, graphic snowflakes, and gooey, melting cheese.

Koons highlights the hyperreal, exaggerated nature of images pulled from coupons and magazines in precise areas of color. He pairs sprawling, perspectival landscapes with graphic curves and swells, every inch of the canvas bursting with detail. Cheerios and blonde braids spiral in a cavernous grotto; pedicured feet and donuts overwhelm an aerial view of Niagara Falls; and figures in lobster and octopus costumes pose within the metal armature of a rollercoaster, with syrup and butter melting over stacks of pancakes in the sky above. The Easyfun-Ethereal series infuses art history with the vernacular charge of American life, drawing the viewer into awe-inspiring panoramas that are as edgy as they are sublime.

As the title suggests, the black granite sculpture Woman Reclining depicts a female figure on a small divan, both legs raised over a planter filled with vivid blooming flowers. Like many of the Easyfun-Ethereal paintings, it draws upon the potent visual memories of childhood, in this case Koons’s fascination with a novelty porcelain ashtray that sat on his grandfather’s table. The ashtray was in the form of a woman lying on her back holding a fan, her legs raised in the air. When a cigarette was set to rest beneath her legs, the smoke would activate them to rock back and forth. The very same knickknack inspired the porcelain sculpture Woman in Tub (1988), from the Banality series. Koons often cites this reference, underscoring the importance of liberating oneself from cultural shame by embracing one’s authentic cultural history.