In the new year artist Bridget Riley will present her third solo exhibition with David Zwirner she will be showing recent work from the last four years. Spanning three floors of the 24 Grafton Street location in London, the exhibition will include wall paintings and works on canvas as well as a group of related studies that focus on two themes: works in black-and white and the disc. The works on view both extend and rework the artist’s previous investigations of these motifs in new ways. 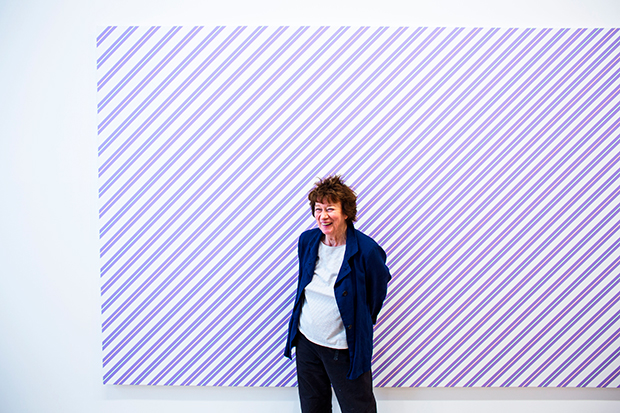 Riley’s formally taut, abstract compositions yield a singular sense of visual pleasure for the viewer, a notion derived as much from the artist’s formative encounters with Old Master and Impressionist painting as from her early experiences with nature. Since 1961, she has focused exclusively on seemingly simple geometric forms, such as lines, circles, curves, and squares, arrayed across a surface—whether a canvas, a wall, or paper— according to an internal logic. The resulting compositions actively engage the viewer, at times triggering sensations of vibration and movement.

This sense of dynamism was explored to great effect in the artist’s earliest blackand-white paintings, which established the basis of her enduring formal vocabulary. In 1967, Riley introduced color into her work, thus expanding the perceptual and optical possibilities of her compositions. Though she has completed site-specific murals, beginning in 1983 with her work for the Royal Liverpool University Hospital, more recently, the development of Riley’s body of wall paintings, initiated in 2007 with Arcadia 1, underscores perception itself as her enduring subject. Painting directly on the wall, Riley collapses the distinction between figure, ground, and support, thus activating the picture plane in a different way than her works on canvas.

Over the course of her more than fifty-year career, Riley has frequently returned to earlier ideas and even to specific works in order to identify alternative directions that a form could take. As she has noted, “I am sometimes asked ‘What is your objective’ and this I cannot truthfully answer. I work ‘from’ something rather than ‘towards’ something. It is a process of discovery.” On the ground floor will be wall paintings and works on canvas in which the artist has returned to an achromatic palette for the first time since the
1960s. In particular, works such as Quiver 3 (2014) take up the motif of the triangle, first explored in Tremor (1962; Museum für Gegenwartskunst Siegen, Germany), which comprises tightly tessellated, irregular triangles that combine to create a subtle sense of undulation across the surface of a square canvas. Here, Riley revisits the equilateral triangle, but introduces a curved edge that greatly modulates the overall tenor of her composition.

The gallery’s first floor will include wall paintings and works on canvas featuring a recently inaugurated motif: discs. While new to Riley’s lexicon, these works have their basis in the artist’s Deny paintings from 1966, which feature gridded circular forms. Executed during a period when Riley was beginning to experiment with color, in particular incorporating gray tones into her compositions as a chromatic intermediary between black and white, these works are animated by the sum effect of the interaction
of color and form. With the discs, which were first presented in the artist’s 2017 solo exhibition at Christchurch Art Gallery, New Zealand, Riley has broken open the tightly constructed grids of the 1960s, creating even more complex and nuanced structures within which individual components interact, depending on the viewer’s position. Also on view in the Upper Room will be a group of studies for this body of work. Throughout her career, Riley has extensively utilized smaller scale works as a means of arriving at her final compositions. Presented alongside larger works, these studies give crucial insight into the artist’s working method.

About The Artist
Bridget Riley was born in 1931 in London, where she attended Goldsmiths College from 1949 to 1952 and the Royal College of Art from 1952 to 1955. Riley’s first solo exhibitions were held at Gallery One, London in 1962 and 1963, followed by two exhibitions at Robert Fraser Gallery, London, in 1966 and 1967. She was also at that time included in numerous group exhibitions such as Towards Art?, Royal College of Art London (1962); The New Generation, Whitechapel Gallery, London (1964); and Painting and Sculpture of a Decade
1954–1964, Tate Gallery, London (1964). In 1965, her work was included in the now-seminal group exhibition The Responsive Eye, organized by William Seitz at The Museum of Modern Art, New York. In 1968, she represented Great Britain at the 34th Venice Biennale (along with Phillip King), where she was the first living British painter to win the prestigious International Prize for Painting. Her first retrospective, covering the period 1961-1970, opened at the Hanover Kunstverein in 1971, and subsequently traveled to Kunsthalle Bern, Kunstahlle Düsseldorf, Galleria Civica d’Arte Moderna, Turin, and the Hayward Gallery, London. More recent solo exhibitions include Bridget Riley: Cosmos at Christchurch Art Gallery, New Zealand (2017); Bridget Riley: Venice and Beyond, Paintings 1967-1972 at Graves Gallery, Museum Sheffield, England (2016); Bridget Riley – The Curve Paintings 1961- 2014 at De La Warr Pavilion in Bexhill on Sea, England (2015; traveled to Gemeentemuseum, The Hague); Bridget Riley: Learning from Seurat at The Courtauld Gallery in London (2015); and Bridget Riley at the Art Institute of Chicago (2014-2015). Bridget Riley: Paintings and Related Work (2010-2011) was on view at the Sunley Room at the National Gallery, London. Also in London
in 2010, the National Portrait Gallery presented Bridget Riley: From Life, an exhibition of Riley’s little-known sketches drawn from life. Other recent international museum shows include Bridget Riley: Flashback, which first went on view at the Walker Art Gallery in Liverpool in 2009; Bridget Riley: Rétrospective at the Musée d’Art Moderne de la Ville de Paris in 2008; Bridget Riley: Paintings and Drawings 1961-2004 at the Museum of Contemporary Art, Sydney in 2004-2005; Bridget Riley: New Work at the Museum Haus Esters and Kaiser Wilhelm Museum, Krefeld, Germany in 2002; and Bridget Riley: Reconnaissance at the Dia Center for the Arts, New York in 2000-2001.

A new large-scale wall painting by Riley is currently on view at the Chinati Foundation in Marfa, Texas through 2019. In addition, Riley’s work is highlighted in the exhibition Seurat to Riley: The Art of Perception, Pattern, Pointillism & Op Art currently at The Holburne Museum in Bath until January 18, 2018 (first presented at Compton Verney Art Gallery & Park, Warwickshire); as well as in Monochrome: Painting in Black and White at The National Gallery, London through February 18, 2018. A major exhibition of Riley’s work will open at the Kawamura Memorial DIC Museum of Art, Sakura, Japan, in April 2018. Riley joined David Zwirner in 2014, and the gallery’s inaugural exhibition of her work, Bridget Riley: The Stripe Paintings 1961- 2014, was held in London that year. In 2015, a career spanning survey was presented at the gallery in New York. In 1974, Riley was named a CBE (Commander of the Most Excellent Order of the British Empire) and in 1999, appointed the Companion of Honour. In 2003, the artist was awarded the Praemium Imperiale in Tokyo. She received the Kaiser Ring of the City of Goslar, Germany in 2009 and the Rubens Prize of the City of Siegen, Germany in 2012. Work by the artist is included in museum collections worldwide, including the Art Institute of Chicago; Arts Council, U.K.; British Council, U.K.; Dia Art Foundation, New York; Israel Museum, Jerusalem; Kunstmuseum Bern; Los Angeles County Museum of Art; The Metropolitan Museum of Art, New York; Moderna Museet, Stockholm; Museum für Gegenwartskunst, Siegen, Germany; Museum of Contemporary Art, Los Angeles; The Museum of Modern Art, New York; National Museum of Modern Art, Tokyo; National galerie, Berlin; Stedelijk Museum, Amsterdam; and Tate Gallery, London. Riley lives and worksin London.
en.wikipedia.org/wiki/Bridget_Riley 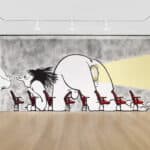