A stone’s throw from Brick Lane, the Close Up Film Centre hosted a night of performance and experimental film as part of Narrativize, from the series of events that have formed the Unconscious Archives Festival on September 30th.

There were four performances at the venue’s superbly equipped, intimate cinema screening room exploring through deconstruction conventions of cinematic presentation and exploration of narrative in film form.

James Holcombe and Secluded Bronte’s performance is part of a developing film project, Against Cinema which explores hidden connections between sound, cinema, warfare and human behaviour.  A combination of live spoken word, sound and Holcombe’s projections of distressed cinema stock, it explored the material nature of celluloid film and its broader cultural socio-economic landscape.

This was an interesting take on the often po-faced sphere of structural materialism.  Holcombe’s projection’s evoked the work of non-narrative abstract work of pioneers in the vein of Len Lye and Stan Brakhage, while the performance element was rich in contextual subtexts, serving as props that explored an imaginative discourse and analysis of film’s story as a cultural medium.


Foxy Moron’s Owed To Bussa was a personal exploration of black cultural iconography centred on the artist’s emotional attachment to the statue, Bussa Emancipation, in Bridgetown Barbados which memorialises the African born slave and colonial rebel of the same name.  The piece was presented as a series of Desktop video screen captures with live musical performance using a Theremin and looped vocal performances.

There was in this work, an especially profound connection with the central themes of the festival’s enquiries into the connection between the self and the traces of data generated through interaction with digital devices.  The internet as the primary cultural interface of the early 21st century is very similar to that of cinema in the early 20th century with exception that these moving images are generated through direct interaction and are an imprint of an intensely personal journey with the same performative aspect of pre-talkies cinema where the soundtrack would be performed live along with the film. Even more so, that Foxy Moron’s chooses an instrument that itself too that can track its revolutionary roots back through a century since its invention.  She concluded her performance with Owed To Asylum.

Spanish artist Esperanza Collado’s film didn’t so much break through the fourth wall as demolish it.  Out of the four pieces presented, hers perhaps was riskier than any other.  A minimal film that played with the idea of cinema’s primary roots as a medium for words and images, where the success of the work was entirely subject to the participation of the audience.

There was in this respect a thread of Flux art running through the artist’s gamble.  As with Yoko Ono’s Cut Piece, it was s down to the audience to choose to pick up the scissors or in this case, rather more playfully turn to look behind or choose to scream.  It was a refreshing, witty and intelligent piece of work.

Closing Narrativize was Austria’s Jörg Piringer with his live coding experimentation of abstract audio visual poetry.  He has created software that interprets and modifies his voice through a series of signal processes and samplers.  The result is a balance between the subtleties of the random dynamics of his input and the software system’s own nuances of interpretation.

The result is a form hybrid between with the aesthetic of Musique Concrète and the type of visual presentation more associated with big data visualisation; perhaps this is in fact the point.  Throughout the festival and with its accompanying exhibition Emotion + the Tech(no)body that runs at the Austrian Cultural Forum until 17th November, the recurring central theme of human attachment to data and the technological tools that enable this have recurred cohesively through  a diverse range of art works and performances.  In Piringer’s work, there are again tangible artefacts of an avant-garde traceable to an increasingly distant point in living memory which is now presented again in the immediacy of the present and through vibrant innovation of present and future technological visions that continue to shape the development of the 21st century’s societies. 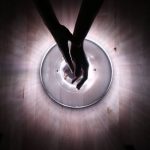