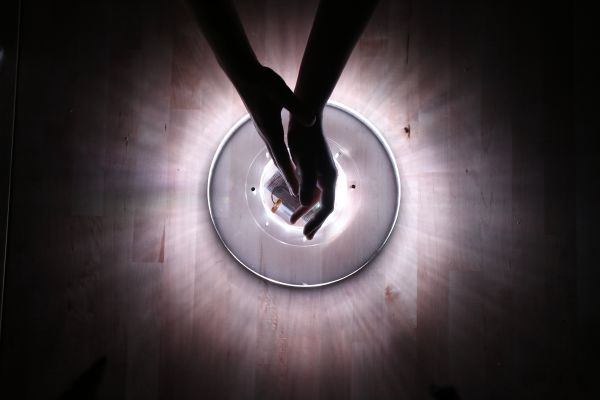 Featuring the artists Myriam Bleau (CA), Mariska de Groot (NL), Leafcutter John (UK), and Dawid Liftinger (AT); Compositional Constructs showcased not just performance but remarkable ingenuity with artists interacting with electronic devices of their own creation to produce the kind of music that has finally caught up with the promises of its 20th century pioneers.

These are devices that interpret light and movement then translate into rich and sophisticated soundscapes.  Remarkably, for work that has the character of what was once considered science fiction, these are performances that connect the once future vision of a theoretical avant garde with the present. If the objective of the Unconscious Archives festival overall is to explore the human attachment and traceable engagements with technology, then what Compositional Constructs showcased was how this group of artists participating are capable of crafting original and distinctive experiences through highly nuanced, gesture based programming of electronic devices.  The event presented artists of today who are defining the vanguard that looks beyond the horizons of Mountain View and Cupertino.

Mariska De Groot of Holland premiered Stirred Mandala, which echoed the mystical origins of James Whitney’s work such as Yantra.  More than just sound art through the interpretation of movement and light, her performance presented a type of music that was once the future and has now manifested itself in the immediacy of the present.

His performance presented an ethereal musical journey through a responsive interpretative synthesised electronic landscape.  He is creating, through his own invention, the tools and platform to realise what the great minds of electronic popular music’s first brush with the art world’s avant garde aspired to achieve in their composition and performances.

Austrian Dawid Liftinger’s Sound And Light uses a digital interface of software, Arduino and circuit relays, the fluorescent tubes are turned on and off, their sound recorded, replayed and amplified, whilst the audience sits in a circle around the tubes gathered as if around a bonfire.

Performing her work Soft Revolvers, Myriam Bleau of Canada closed the programme of Compositional Constructs using four arcylic spinning tops of her own design.  Each top is associated with an ‘instrument’ in an electronic music composition, and the motion data collected by sensors placed inside the tops – informs the musical algorithms.