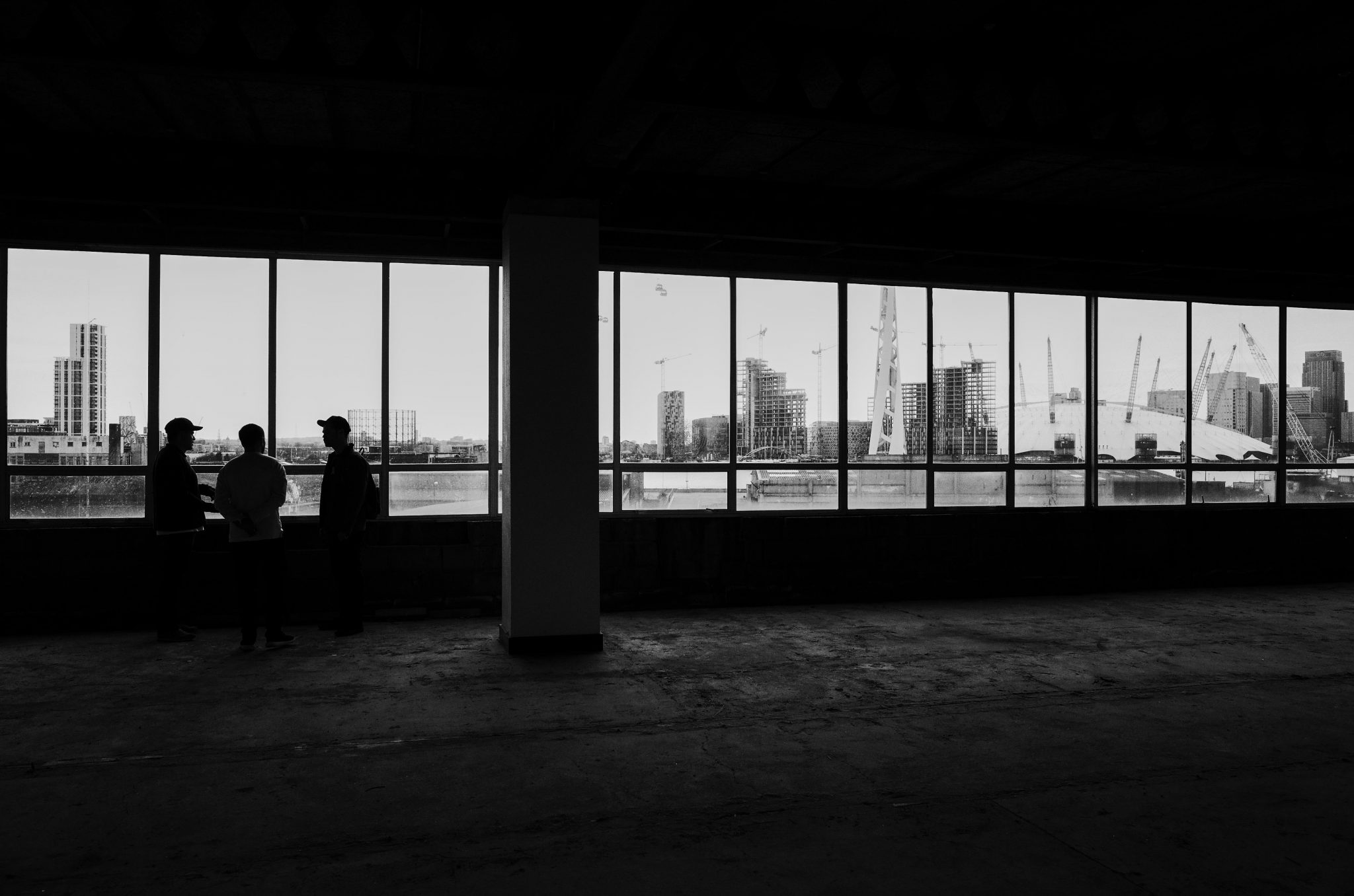 Silver Sehnsucht a contemporary art takeover of a 50,000 square foot Silver Building in London’s Docklands will be the experimental B-side response to the annual Frieze Art Fair. Bringing together 12 artists from 6 countries, the free to the public exhibition Silver Sehnsucht will fill the poetically empty rooms of the building with a multi-sensorial, immersive experience of sound, video, installation, performance and events, weeks before the Brutalist block is transformed into a working space for artists and makers in a project being undertaken by Nick Hartwright and the GLA. The exhibition is set at a provocative time: the post-industrial spaces that surround the Silver Building are on the verge of a major transformation, an impending regeneration that strikes at the heart of the idea behind Silver Sehnsucht:

“Sometimes you can be nostalgic for what is yet to come. A strange feeling of longing for a future yet unknown. This exhibition aims to critically reflect on both the odd merging of past, present and future that the German word Sehnsucht connotes, as well as the ways these are reflected in the show’s surrounding area itself. Silver Sehnsucht explores the bittersweet feeling which emerges from the increasing speed of contemporary world, the feeling of loss for something unknown in the anxious process of ushering in something new”

, explains the curators Mara-Johanna Kolmel, Silvana Lagos and Rafael Schacter from the collective Approved by Pablo in their curatorial statement.

While visiting the sight, audiences will be able to wander the building’s dilapidated spaces to find works by exciting emerging and established artists. Against the impressive backdrop view of London’s Docklands and the River Thames, Rosana Antoli’s site-specific installation made from rubber hose pervades the space like a pulsating drawing in three-dimensional space. The specter of the rubber producing industrialist S.W. Silver, whom Silvertown is named after, also haunts the immersive installation by the collective Matterlurgy. Their installation reassembles industrial materials from the surrounding area to construct a speculative landscape that foregrounds present day geopolitics and industrial histories.

The colonial history of Silvertown is equally taken up by Peruvian artist Paola Torres Núñez Del Prado. In her participatory sound installation, hand-made textiles become a powerful emblem exploring gentrification as a softer version of colonialization. Poklong Anading’s work, a series of painted plastic bags whose gold paint will slowly flake and fragment during the period of the exhibition, exposes both the ephemerality of the material realm as much as the vulnerability of capital. The shimmering sensations induced by Anading’s installation reappear in the seductive video collage by artistWilliam Mackrell. Reverberating in the backdrop view of Canary Wharf’s constellation of financial power, his work amplifies the all-consuming desires and illusions of capitalism that drives the body to inescapable exhaustion. Likewise, the American artist Christine Sun Kim, who has been deaf since birth, exposes the way that past actions are molded and altered through processes of translation, be that of a literal or metaphoric kind.

As a whole, however, all the artists within Silver Sehnsucht aim to interrogate a particular feeling of ambivalence, to uncover the fragments of past actions, the residues of present longing, and the dizzily flickering futures that exist within all spaces and times.

“A unique opportunity arose to work with Nick Hartwright and the team from The Silver Building to create Silver Sehnsucht. It is a natural progression for A(by)P following our three successful exhibitions at Somerset House, Futurismo Ancestral, Mapping The City and Venturing Beyond: Whilst the space could not be more aesthetically different from Somerset House, it contains the same scale and grandeur, albeit of an almost opposite type. The project thus enabled us to continue to create accessible yet critical works for all to experience and enjoy, along with providing a platform for the team of artists we work alongside.”

Curated by Approved by Pablo A(by)P are a curatorial collective, a discursive platform, and a performative hub. They are a space in which ideas are formed, tested, and realised in an open, public and horizontal manner.

Since the inception of A(by)P, the collective has realized three major exhibitions, Futurismo Ancestral (2014), Mapping the City (2015) and Venturing Beyond (2016), all undertaken with their partner Somerset House.

About The Artists
Brad Downey
For Downey (b. 1980, Louisville, USA) the norms and regulations of space, be they public or private, acts as a key thread running throughout his practice. Whether in the street or institution his work thus humorously and critically challenges viewers to interrogate the conventions of these locales, initiating discussion about how exactly we should engage with the often-hidden customs of movement that profoundly shape collective habitus. Selected solo and group exhibitions held atStolenspace, London, NUN, Berlin, Cuadro, Dubai, Overcoat Gallery, Moscow, NRW Forum, Dusseldorf, Kunsthalle Exnergasse, Vienna, Somerset House, London, Kiasma Museum of Contemporary Art, Helsinki.
www.braddowney.com

Mark Salvatus
Salvatus (b.1980, Manila, Philippines), an ever-curious archeologist and collector of culture, acknowledges familiar objects and the and the socio-economic politics of everyday life. He unearths the unstable pasts of densely populated areas and assembles renewed presents to question notions of nostalgia, with the urban landscape constituting a stage on which these chance encounters between history and present-day play out. For Salvatus time is a medium and history is malleable. Selected group and solo exhibitions include 5th Odessa Biennale, Ukraine, Mori Art Museum, Tokyo, Quezon City, Philippines, Alternative Space LOOP, Seoul, Bendigo, Australia, Galerie Nichido, Taipei, Pi Artworks, London.
cargocollective.com/marksalvatus

Poklong Anading
Anading (b.1975, Manila, Philippines) has expanded his practice to include process-oriented sculptural installation and thus engage all the senses. A socially conscious observer and collaborative collector, he celebrates the mundane, turning facts and memories into images and objects through the often accidental or ephemeral transmutations of matter. Informed by Arte Povere his unexpected alchemical fusions of plastic with gold form a poetic dialogue between the base and the luxury. Selected group and solo exhibitions include Cross Art Projects, Sydney, Gwangju Biennial, South Korea, Yerba Buena Center for the Arts, San Francisco, 8th Jakarta Biennial, Freies Museum, Berlin, Asian Art Museum, San Francisco.
www.guggenheim.org/artwork/artist/poklong-anading

William Mackrell
The works by William Mackrell (b.1983, London, UK) present themselves as thoughts and gestures salvaged from the wreckage of saturated and distracted environments. His stage is set in the language of photography but dismantled through turning photography into choreography. Hovering between existing and not being visible, fleeting, shifting, this sense of the temporary comes from his ingested self, growing up in London, where space and people are forever in flux, nothing stays reliable. Selected solo and group exhibitions have been held at The RYDER, London, Krinzinger Projekte, Vienna, Albright-Knox Art Gallery, Buffalo, FOLD Gallery, London, Cuadro Gallery, Dubai, Dundee Contemporary Arts, Scotland.
www.williammackrell.com