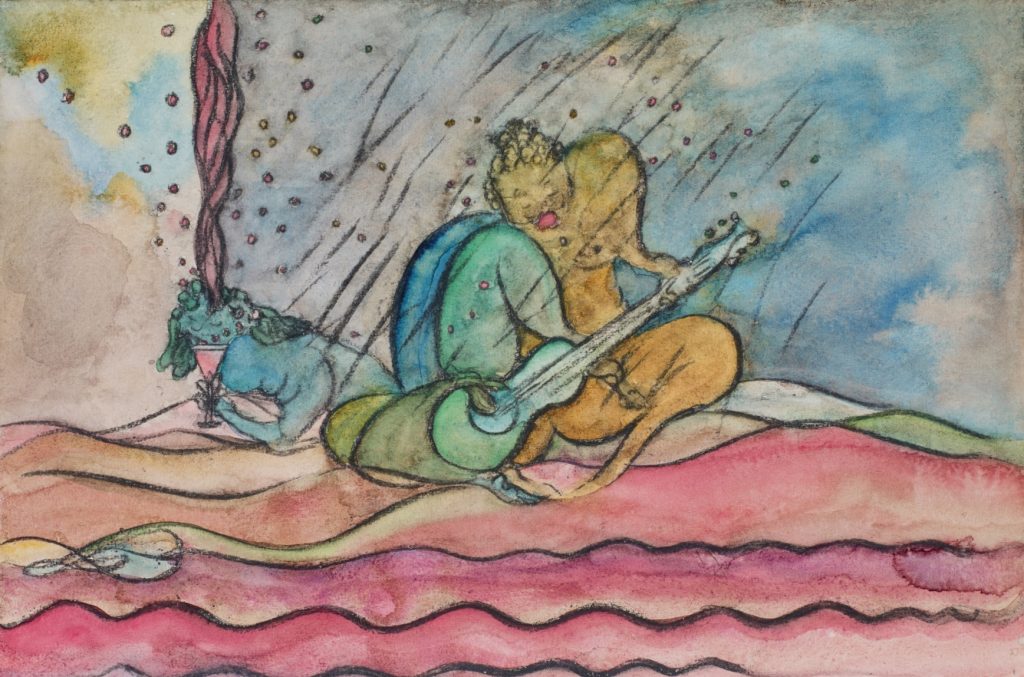 As if you could throw your arms around the sea, and weave water out of wool, words, and magic… this was essentially the task presented to Edinburgh’s Dovecot Tapestry Studio. It took five people three years to hand weave a tapestry over seven metres across from a delicately whimsical watercolour design by Chris Ofili.

Weaving Magic (2014-2017) at the National Gallery aims to place Ofili in a tradition of tapestry design represented in the same building by no less than Goya and Rubens, though with the unique reference points you might expect from an artist who made his mark standing canvases on clumps of elephant dung. Dr Minna Moore Ede’s thorough and thoughtful curation explicates the different levels of composition as well as the complex processes of the final work’s creation.

Alongside preparatory charcoals and pastels, the final watercolour design is exhibited in its final triptych format with a watery-blue palette and rich violets and greens. This was traced on acetate and blown up 877% to make a cartoon to guide the weavers. Brush marks that took moments, the instantaneous and not always predictable staining of the paper, were painstakingly recreated by the weavers over months and years. It really looks painted until you close in on the pixillations of the weave. It’s not a simple reproduction— the effect would be flat if the wools were not threaded pointillistically from different colours, which makes them shimmer and fizz.

The tapestry commands the National Gallery’s huge Sunley Room. The walls are covered in a grey frieze of twenty-seven playful figures whose joyous gender fluidity echoes the lush and fluid Arcadian world of the central tableau: a guitar-playing man and a reclining woman at the confluence of a waterfall and a gently lapping pool with a calm sea in the background.

Into this mythic scene comes the contemporary figure of footballer Mario Balotelli as a presiding god of libation and misrule in one panel, and in the other a woman carrying a caged bird. In Ofili’s home Trinidad finches are trained for competitive singing. The woman is feeding a sprig of seeds to the birds to make its song sweeter. The Caged Bird’s Song (2014) echoes Maya Angelou’s epochal autobiography as an extra layer of meaning to express ambivalence about how beauty often comes from dark means. Despite the carefree sensuality of Ofili’s crude figures and the lustrous colours of the fabric, in the sky darkening above the calm sea of the scene and in the grey frieze around it, thunder clouds loom. 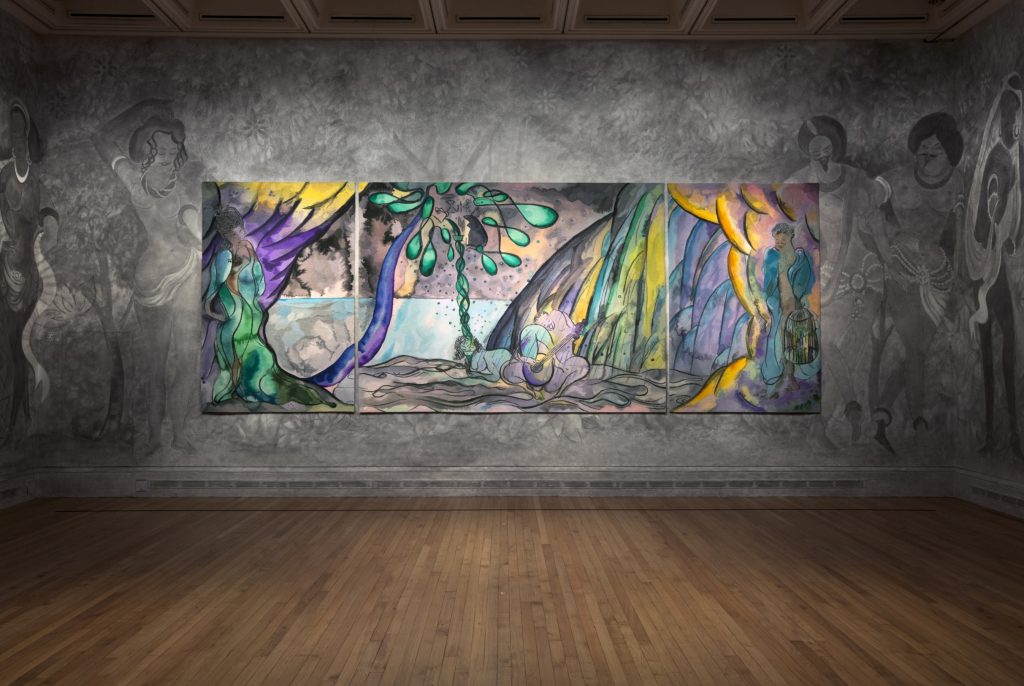