The rise in art protests: how the gallery became a new battleground - FAD Magazine
Skip to content 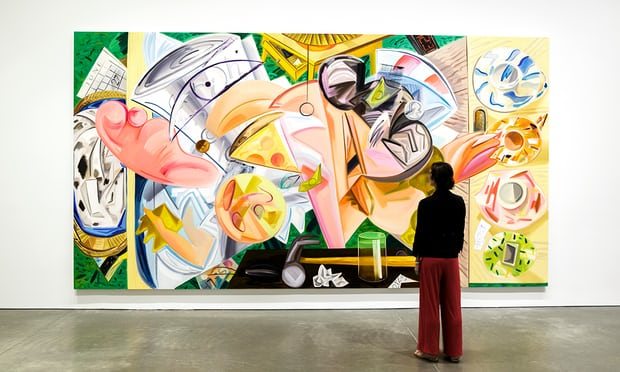 An image of the Dana Schutz exhibition at the Institute of Contemporary Art in Boston. Photograph: John Kennard

This article titled “The rise in art protests: how the gallery became a new battleground” was written by Nadja Sayej, for theguardian.com on Tuesday 1st August 2017 10.00 UTC

New York-based artist Dana Schutz caused an uproar this spring when she exhibited Open Casket, a painting of Emmett Till, the 15-year-old whose brutal murder sparked the civil rights movement.

As a white artist making art about black pain and showing it at the Whitney Biennial, several activists responded negatively to the work, one with a letter calling for it to be destroyed, another a staged protest with a shirt reading: “Black Death Spectacle”.

Now, the controversy has returned as Schutz is the focus of a new survey show at the Institute of Contemporary Art in Boston. A group of local activists has written a public letter calling out the museum for capitalizing on the controversy and supporting a “violent artefact”.

“Please pull the show,” the group wrote in the letter.

“Her public stock rose higher than ever,” said Barbara Lewis, director of the William Trotter Institute for the Study of Black History and Culture at the University of Massachusetts in Boston, one of the group’s members.

“Her celebrity continues to ride the rewards of the black death controversy in an era of Black Lives Matter,” she said. “Although the Till painting is not in the Boston show, it is there by proxy, permanently present in institutional memory, attached to this artist and to the spaces that afford it additional power.”

Till’s birthday, 25 July, is the same day the museum held a donor reception. “Possibly, the ICA donors did not realize they were celebrating in the shadow of another chasm and absence, that of a beautiful teenage boy beaten to death over a lie,” Lewis said, “whose face remains the iconic civil rights emblem of failed democracy, a face that Schutz has reconfigured.”

The museum’s director, Jill Medvedow, said the uproar opens a doorway to the exhibition. “This past March, when her painting was shown at the Whitney Biennial, there was a range of responses, including many who felt that the painting embodied privilege and had caused them pain,” she said.

“Though Open Casket is not in the exhibition, we welcome the opportunity for debate and reflection on the issues of representation and responsibility, sympathy and empathy, art and social justice.”

This is not the first and won’t be the last of recent protests against art. Despite art often being used as a means of protest, some protesters will find fault in that. How far can you go in terms of artistic freedom?

There have been ongoing protests in the working class district of Boyle Heights in Los Angeles, focused on the increase in gentrification. A group of activists are attacking the local art galleries, like the Nicodim Gallery and other “cutting edge” galleries, for unwanted change in the area. And in December, it was reported that someone wrote “White Art” on the gallery’s exterior door and one local group says the galleries are “artwashing” the area.

In February, the PSSST Gallery in Boyle Heights closed amid the battle against activists. As the gallery’s announcement read on its website: “Our staff and artists were routinely trolled online and harassed in-person. This persistent targeting, which was often highly personal in nature, was made all the more intolerable because the artists we engaged are queer, women, and/or people of color. We could no longer continue to put already vulnerable communities at further risk.”

Shortly after Trump came into office, London’s LD50 gallery drew protesters after the gallery featured a show focused around the alt-right, featuring printed-out tweets, memes and diagrams tracing the history of white supremacy. Protesters painted a pink swastika and a hammer-and-sickle image outside the gallery and a protest commenced the night of the show’s opening.

Also in London, the British Museum shuttered it doors last summer for the first time ever because of activists. A group of Greenpeace protesters climbed the museum’s front columns to draw attention to the exhibition Sunken Cities, which was sponsored by oil company BP, a company which Greenpeace describes as one “that profits from climate change and is responsible for environmental disasters such as the Deepwater Horizon oil spill”.

In Moscow, American photographer Jock Sturges’s photo exhibition at the Lumiere Brothers Center for Photography was shut down last fall. A pro-Kremlin senator said the photos of young, naked girls were child abuse and state TV said it was “propaganda of paedophilia”. Protesters apparently threw urine at some pictures.

Some protesters, it seems, have a bit of a sense of humor. The American Museum of Fine Arts in Boston was met with “anti-Renoir” protesters who were disgusted by the works of old master Pierre-Auguste Renoir on display in 2015. The activist group, called the “Renoir Sucks At Painting Movement”, held a protest outside the museum with placards that read “God hates Renoir”. The self-proclaimed cultural justice seekers drew attention to the less-famed artists in the museum’s collection. They wrote on Instagram that “considering the museum has masterpieces by actually talented artists in storage, it’s a curatorial failing and amounts to an act of aesthetic terrorism”.

Protests of art don’t just happen in galleries, they also happen onstage. Last week in Germany, Woody Allen and his New Orleans Jazz Band were playing at the Hamburg Philharmonic until it was interrupted by the feminist art collective Femen. A video shows the group of women with bare chests, chanting: “Stop the culture of silence!”

Related: Hipster-bashing in California: angry residents fight back against gentrification

Their chests were scrawled with phrases by Dylan Farrow, Allen’s adopted daughter, who accused Allen of sexual assault and published a public letter in the New York Times in 2014. “Woody Allen is a living testament to the way our society fails the survivors of sexual assault,” one of the artist’s chests read. After the women were dragged offstage by security, Allen released a statement calling Femen’s artistic intervention “stupid”.

The theatre stage has also been a target of protesters. In 2014, the Barbican in London was beset by a group of 200 activists against an anti-slavery exhibition by South African artist Brett Bailey, who put black actors chained in cages. The protesters called it “an exhibition of white privilege”. The show was closed after the group collected 20,000 signatures against the Barbican’s “complicit racism”. It ended because of a perceived threat to the safety of the institution and artists, though the protests were peaceful and there were no police arrests.

What drives people to protest art so much, these days? It could be the political climate, says John R Wallach, political science professor at the City University of New York.

“The unintended benefit of the Trump-Republican disaster has been the generation of new energy in the public to learn about politics, how it affects them and how they can affect it through protests,” he said.

“It speaks to a greater appreciation of the terms and limits of American democracy.”