'We found it rolled up in a tube': Alice Cooper discovers Warhol classic after 40 years - FAD Magazine
Skip to content 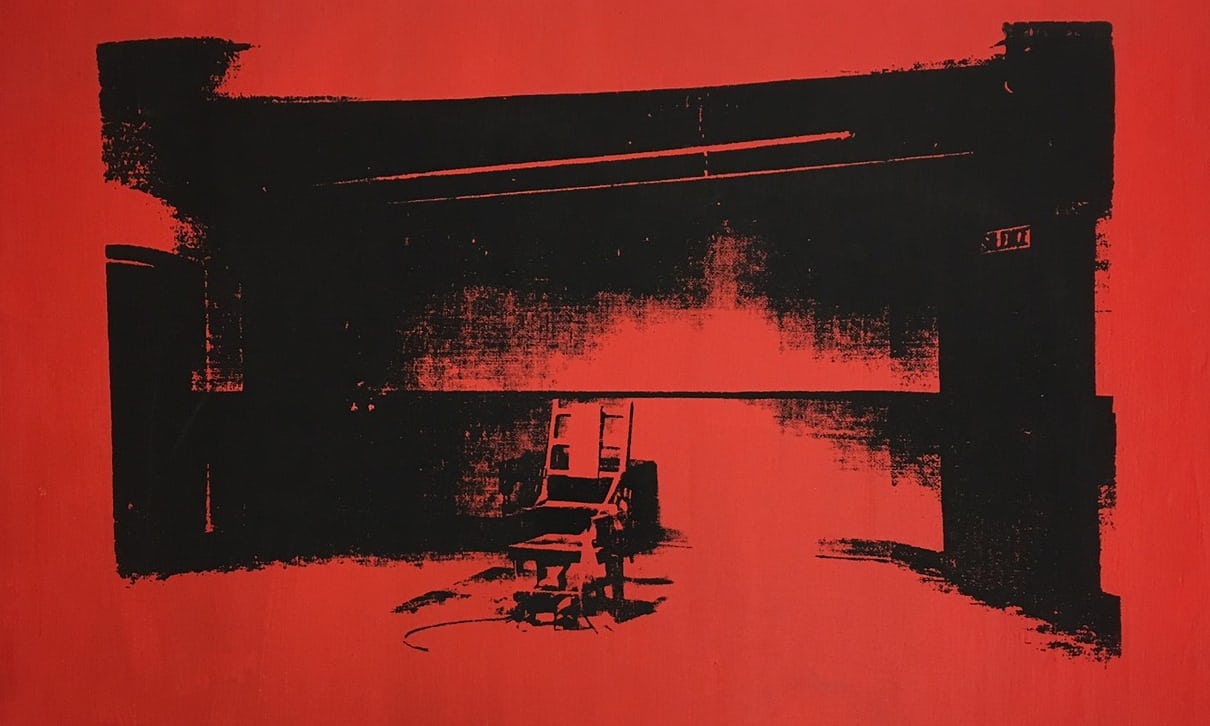 This article titled “‘We found it rolled up in a tube’: Alice Cooper discovers Warhol classic after 40 years” was written by Edward Helmore in New York, for The Guardian on Monday 24th July 2017 06.00 UTC

The rock star Alice Cooper has found an Andy Warhol masterpiece that could be worth millions “rolled up in a tube” in a storage locker, where it lay forgotten for more than 40 years.

The work in question is a red Little Electric Chair silkscreen, from Warhol’s Death and Disaster series. Never stretched on a frame, it sat in storage alongside touring artefacts including an electric chair that Cooper used in the early 70s as part of his ghoulish stage show.

“It was back in 72 and Alice had moved to New York with his girlfriend Cindy Lang,” Gordon told the Guardian. “Andy was kind of a groupie, and so was Alice. They loved famous people. So they started a relationship, and they loved to hang out.”

Warhol went to see a concert in which Cooper feigned electrocution in a chair identical to the one in Warhol’s print. The image is based on a press photograph from 13 January 1953 of the death chamber at Sing Sing prison, where Julius and Ethel Rosenberg were executed that year for conspiring to pass atomic secrets to the Russians.

Lang, a model and Interview magazine cover star who died in January at the age of 67, had the idea to approach the artist’s studio and purchase one of the 1964 canvases.

“As I recall,” Gordon said, “Cindy came to me for $2,500 for the painting. At the time Alice is making two albums a year and touring the rest of the time. It was a rock’n’roll time, none of us thought about anything. He ends up going into an insane asylum for his drinking and then leaves New York for LA.

“Alice says he remembers having a conversation with Warhol about the picture. He thinks the conversation was real, but he couldn’t put his hand on a Bible and say that it was.”

The artwork entered Cooper’s touring equipment collection, and disappeared. Then, four years ago, Gordon was having dinner with a Los Angeles art dealer, Ruth Bloom. She mentioned how much a Warhol had recently fetched at auction. Gordon mentioned that Cooper had had a Little Electric Chair. Bloom advised him to find it.

“Alice’s mother remembered it going into storage,” he said. “So we went and found it rolled up in a tube.”

Gordon, himself the subject of Mike Myers’ 2014 documentary Supermensch: the Legend of Shep Gordon, suggested his client hang the work at home. But the singer demurred – the top price paid for a Little Electric Chair is $11.6m, at Christie’s in November 2015 for a green version dated 1964, and he didn’t want anything of such value in the house. So it went back into storage.

Without authentication – it is unsigned – Cooper’s Warhol is unlikely to make quite so much should it ever come to auction. The Andy Warhol Foundation for the Visual Arts stopped authenticating work in 2011, after a protracted legal dispute over a self-portrait owned by a British collector, Joe Simon, that the authentication panel refused to endorse, rendering it valueless.

Gordon took Cooper’s small canvas, which measures 22 x 28in, to Richard Polsky, a Warhol expert who recently published an addendum to the Warhol Catalogue Raisonné. He believes the provenance of the silkscreen checks out and has dated it to 1964 or 1965.

Related: Mike Myers: why I made a film about supermensch Shep Gordon

“I’m 100%,” Polsky told the Guardian. “It looks right, and the story just makes too much sense. It’s hard to appreciate how little Warhol’s art was worth at the time. Twenty-five hundred was the going rate at the time. Why would Andy give him a fake?

“He had plenty of electric chairs. They were not an easy sell. They weren’t decorative in the conventional sense. It’s a brutal image.”

Gordon said the singer had changed his mind and was now considering hanging his Little Electric Chair in his home, when he comes off tour at the end of the year.

“Truthfully, at the time no one thought it had any real value,” he said. “Andy Warhol was not ‘Andy Warhol’ back then. And it was all a swirl of drugs and drinking. But you should have seen Alice’s face when Richard Polsky’s estimate came in. His jaw dropped and he looked at me.