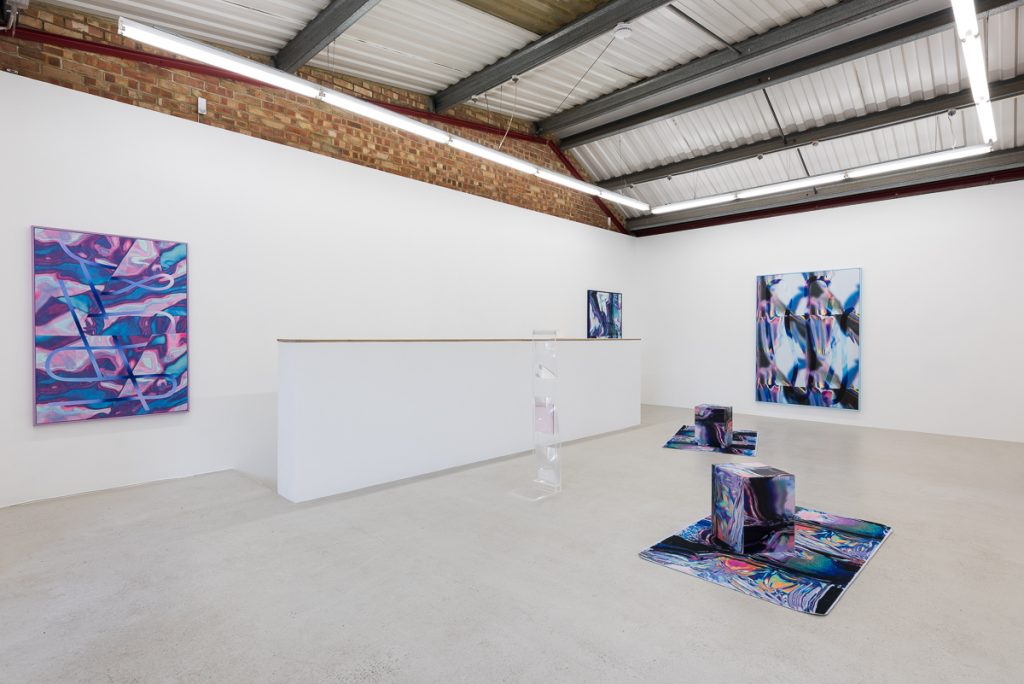 Anne Vieux’s paintings and sculptures explore the optics of the computer screen and the implications of light on abstraction, through digital reproductions of material surfaces.  Images of holographic and translucent paper are captured and altered digitally via layers of warping and repetition, then printed on to microfibre fabric.

In your recent solo show, mesh at Annka Kultys Gallery, you exhibited both paintings and sculpture which utilise the same printing technique. Do you think that the works function differently even though, at first glance, they seem streamlined?

Although the imagery is similar, the shifts of the material completely change how the paintings and sculptures are read. The loop and repetition of the painted image transforms them into these hypnotic pieces, where your body kind of melts away, similar to the feeling when in front of a screen. Although the cubes are slightly animated (they blur and come into focus based on the viewer’s movement), they almost feel more static than the paintings. 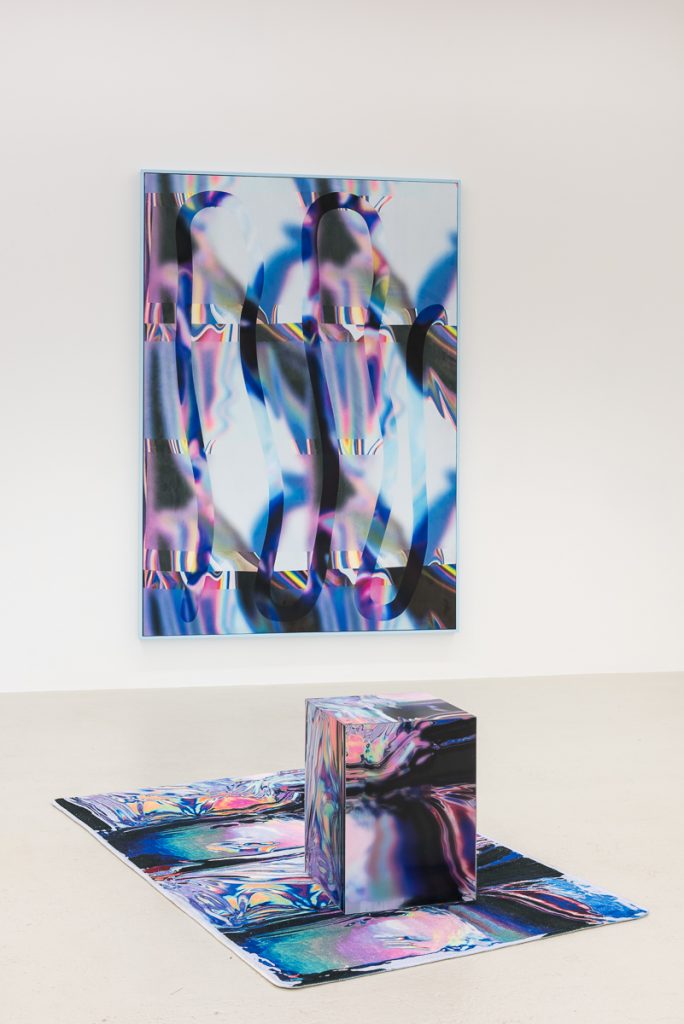 What is the significance of the title of the show, mesh?

I was thinking about the associations and different meanings of mesh. Mesh is the product of two lines intersecting at parallel vertices. Mesh is the plane on which to create in digital modelling programs, but also a psychologically charged physical space. I was thinking about the barrier between screens and the body as one layer of mesh, as well as the architecture of the gallery as a mesh. The more I thought about mesh, I was able to structure ideas around mediation, the body, femininity.

I am particularly interested in the sculptural works where a printed piece of wood is placed on top of a printed rug. The combination of these two items alludes to a relationship between art and design. Can you talk a bit about this and the decision to include these works?

I am interested in the dissonance between looking in and looking at. The format of painting/sculpture provided a kind of structure to create a somewhat hypnotic experience.

The materials I choose either have a rigid plastic industrial quality or a fuzzy, familiar quality.

The associations span from kitsch to technologically retro, but it’s all really subtle. I think the interaction between my light imagery and abstractions creates interesting relationships. I’m trying to slow down virtual space, and speed up the painting space.

The curation and environment of the show, and indeed the work itself, is in some ways very clean. However, there is a tension in that you have deliberately chosen to hang the work low for a more bodily experience. As well as this, sculptures that include rugs (domestic objects) confront us on the floor. Can you talk a bit about this?

The paintings are hung parallel to the viewer, who become a vertice, or marker in space. I used the concept of enmeshment loosely, thinking about how the viewer might be seduced into the surfaces of the paintings. The rugs have a familiar bodily quality, and even though removed from a domestic setting (like the surface of the paintings) they do retain some aspect of the familiar and soft. I like the dissonance created by this normally flat utilitarian object becoming a space to look into. 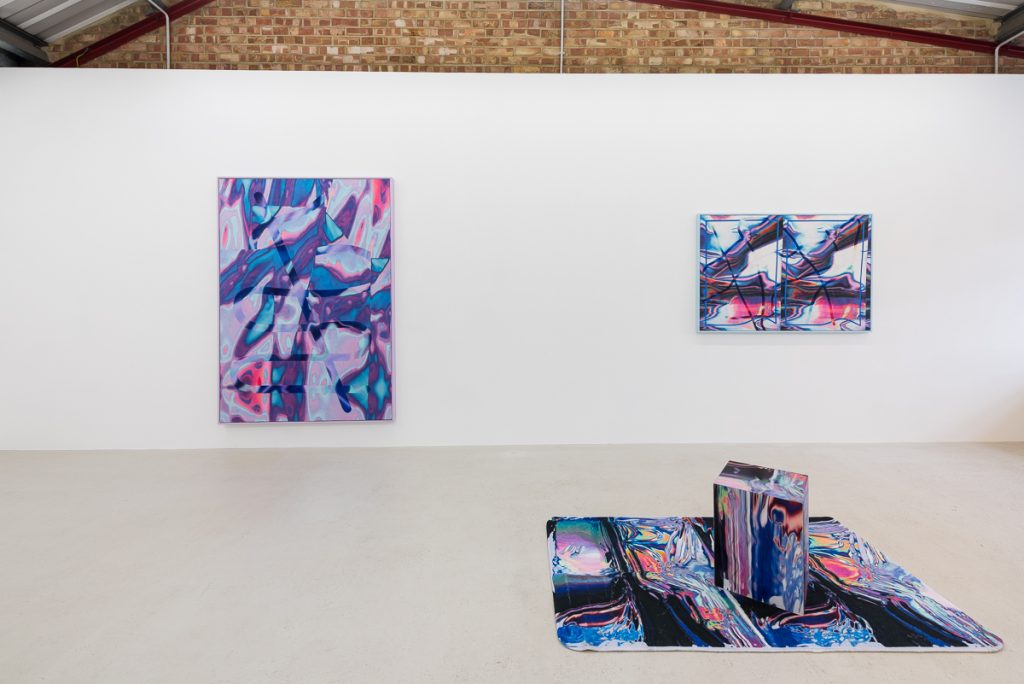 When you see the work, you have no doubt that it is contemporary, as the press release for mesh states the work “follows the logic of 3D-modelling software”. However, there seems to be a nod to earlier movements: Californian light artists like Larry Bell or Minimalists like Richard Artschwager. Have these artists been of influence and if so, what is their significance to you?

Yes, for sure. My process essentially is about capturing light and creating a “virtual image,” one that has no referent in our real world. Larry Bell’s work has interested me visually and other artists that use reductive methods. I keep thinking about where these artists left off and how light can be explored in different contexts. I see my work as almost the opposite, additive and maximal. Being elemental, works using light are really accessible.

Repetition and layering is important in the making of the work. The press release states that when these “physical and digital” methods merge to become “indistinguishable”, that is when a space for the viewer is created. It’s interesting that through repeated processes (doing more) and blurring boundaries (creating distortions), this conversely allows the viewer entry. Why do you think this is?

I think my work is really open and experiential. It’s my approach to a technological idealism, where one is free from binaries. Making space for subjectivity and ambiguity is important to me.

Although your work uses precise digital methods to be created, you are interested in the viewer’s consciousness and how the work expands through being viewed. Can you talk a bit about the relationship between digitally creating works and the viewer?

You know when you are on a computer for a long time, and push away; I’m interested in the cubes and paintings having that quality. It’s a back and forth process between the computer, printing, and painting. It creates this hyper rendered layer of lines bisecting blurred or affected areas. It’s an intense material exploration.

One of the most fascinating things I found is that when I first entered the show, I decided the works were meditative and almost calmingly comforting. However, the longer I spent in the exhibition, the more uncomfortable the works became and the optical illusions became unsettling. The relationship between the paintings and the 3D objects became less streamlined and more absurd as the boxes began to – almost slyly – toy with the flatness of the paintings. What are your thoughts on this?

Yes! The cubes subvert the position of the paintings. I see the experience like a feedback loop cycling, as the viewer loses and gains data. I get into it in my studio and hope the viewer can tap into this too. 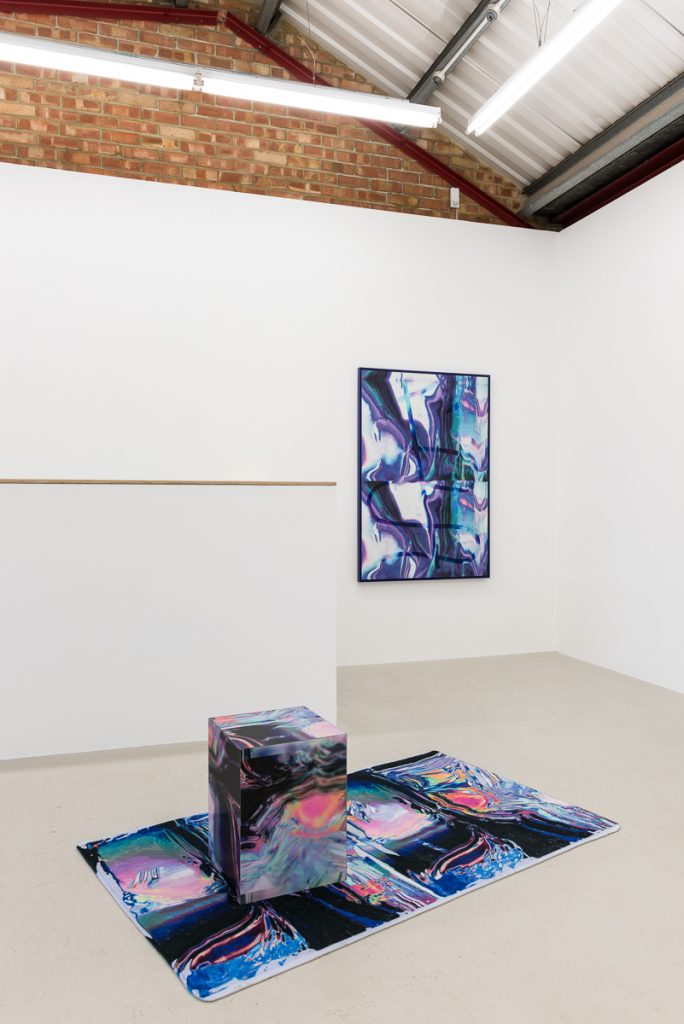 Vieux was born in Michigan in 1985 and is currently based in New York. She received her MFA from Cranbrook Academy of Art in 2012 and her BFA in Painting and Art History at the Kansas City Art Institute in 2009. She recently held a residency at Mana Contemporary, Jersey City, NJ. Annka Kultys Gallery will host the artist’s first solo presentation in London in 2017.

The relationship between Gretchen and Google is like a modern-day David & Goliath.  In kung-fu fashion, Gretchen observes how Google’s […]