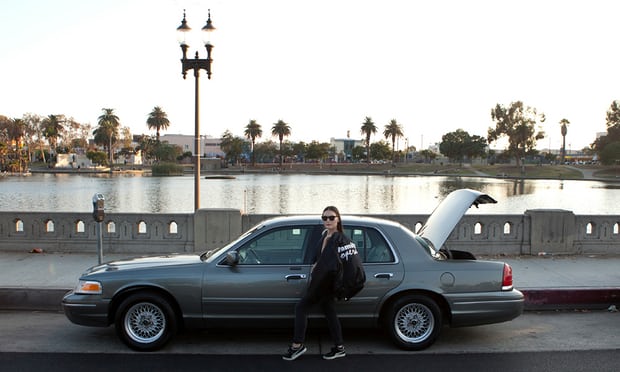 I receive the text telling me my car was downstairs. Outside waiting for me there’s a metallic gray Ford Crown Victoria, the workhorse American automobile often used as cops cars or taxis. But this is no ride-sharing vehicle like a Lyft or an Uber – it’s a mobile art space, Gallery1993. Scattered throughout the car are objects created by artist Tita Cicognani for her current exhibition, Your Ground. In the footwell opposite me, a ceramic figure of a fork-tongued demon sat atop a custom floor mat adorned with flames, a whimsical, vehicular vision of hell.

Related: Art of noise: how galleries became the best places to rave

As we take a meandering drive around the picturesque Los Angeles neighborhood of Angelino Heights, I discuss the gallery’s concept with Seymour Polatin, my driver and Gallery1993’s founder. Polatin started the project two years ago in Boston in another Crown Vic, this one from 1993 (also the year he was born), as way to explore ideas about the public’s access to and experience of art. “The line between private and public is getting so blurred, people showing their private collections to the public, and the car is part of the conversation,” he says. “I’m interested in opening up how people view exhibitions.”

A few times a week, Polatin will drive to someone’s house and pick them up for a roving viewing and conversation about the current show. “I like the idea of someone being able to walk out of their house and into an exhibition space,” he says. With no set route or time limit, he tailors each ride to the individual passenger. “It’s up to me to gauge the conversation well enough so people get the full experience, but not so they feel trapped,” he notes. “It becomes social practice.”

Much has been written about the expanding LA art scene over the past few years, but for the most part, independent, predominantly artist-run spaces have been overlooked in favor of flashier mega-galleries and private museums. The newest of these is the Marciano Art Foundation, which houses the collection of Maurice and Paul Marciano, founders of the Guess fashion brand. Located in the former Scottish Rite Masonic Temple on Wilshire Boulevard, the building has been thoughtfully repurposed by architect Kulapat Yantrasast of wHY, who retained the Temple’s original charm while carving out spaces for contemporary art. The collection itself is less impressive, featuring much of the same or similar blue-chip art that can be seen across town at the Broad, another recently founded museum also built around a private collection.

On the flip side of this high-end artistic flowering, several unconventional, DIY spaces have cropped up around LA, challenging the hegemony of traditional white-walled institutions. Gallery1993 will be joined by another four-wheeled art space when Gas, a repurposed delivery truck, opens its doors this fall. Gas was founded by curator Ceci Moss, who moved to LA recently after stints at Yerba Buena Center for the Arts in San Francisco, and the New Museum and Rhizome in New York. “I wanted freedom compared to more formal institutions,” Moss says of her new project. “Hopefully the space will give a lot of room for experimentation in terms of the types of shows I can do, where I can do those shows, and the concepts that can be explored.”

Moss plans to partner with other organizations where she will park Gas for the duration of each exhibition, beginning with Night Gallery and a show titled Fuck the Patriarchy, opening 9 September. “I wanted a show that would celebrate resistance while allowing space for our current despondence that people feel in relation to our political climate,” she explains.

In addition to mobility and autonomy, community has also been a driving motivation behind many of these spaces. That is certainly true for the Shed, an unassuming backyard structure situated on a residential street in Echo Park. The brainchild of Jax Cingolani, it began as a rehearsal room, art studio and gathering spot. “Friends would come back here while I would paint, and it started to become a place where all these women met to make stuff together. Then everyone was coming back here,” she recalls. For the past year, the Shed has been home to several underground art and music shows, including an installation of 3,000lb of clay by artist Daniel Schubert, and a record release by high-energy punk/rap group Ho99o9 that drew hundreds of people. “I just wanted a space where the artists could execute their vision and completely fuck up whatever they wanted to, and my only job is to help them with that,” beams Cingolani.

Elevator Mondays, a compact gallery set into a freight elevator, similarly has a sense of community at its core. The project evolved from a series of purely social Monday night barbecues that artist Don Edler organized at his studio, located in the former press building for the Los Angeles Times. He had considered staging exhibitions in the defunct elevator for some time, but it wasn’t until a couple of his own exhibitions at other galleries fell through at the end of last year that he decided to get to work transforming the intimate space. Although it may resemble a traditional – albeit shrunken – gallery, Edler’s goals couldn’t be less commercial. “I’m not handling sales. Whenever you get money involved, things get messy,” he explained. “But I do try to get curators and writers to come by, so hopefully the artists can increase their visibility. One of the primary functions of the space is to connect people.”

Moving from the bowels of a building to the exterior, Gait is an exhibition space set on a rooftop in downtown LA, founded a year ago by artists Megan Mueller and Sam Scharf. Much of the work shown is site-specific, engaging with its surroundings, such as a video projection of the sunset shot from the roof by Theresa Sterner that played in reverse at dusk, going from black to bright as the actual sun dipped below the horizon. The challenging nature of the outdoor space also provides a certain amount of freedom and invites experimentation. “We have the ability to execute ideas very quickly, to create knowledge based on experience as opposed to hypotheticals,” says Mueller.

The LA art world is often described as being driven by artists as opposed to collectors, so it’s no wonder that they’re playing such a large role in reshaping the city’s artistic landscape as it takes a giant leap forward. While the multimillion dollar institutions may be dominating the headlines, scrappy artist-run ventures will continue to expand the boundaries of how art is experienced. “I’m always interested in how non-art world people view the project,” Polatin said from the front seat of his Crown Victoria. “One thing that doesn’t interest me is turning this into a white-walled gallery.”