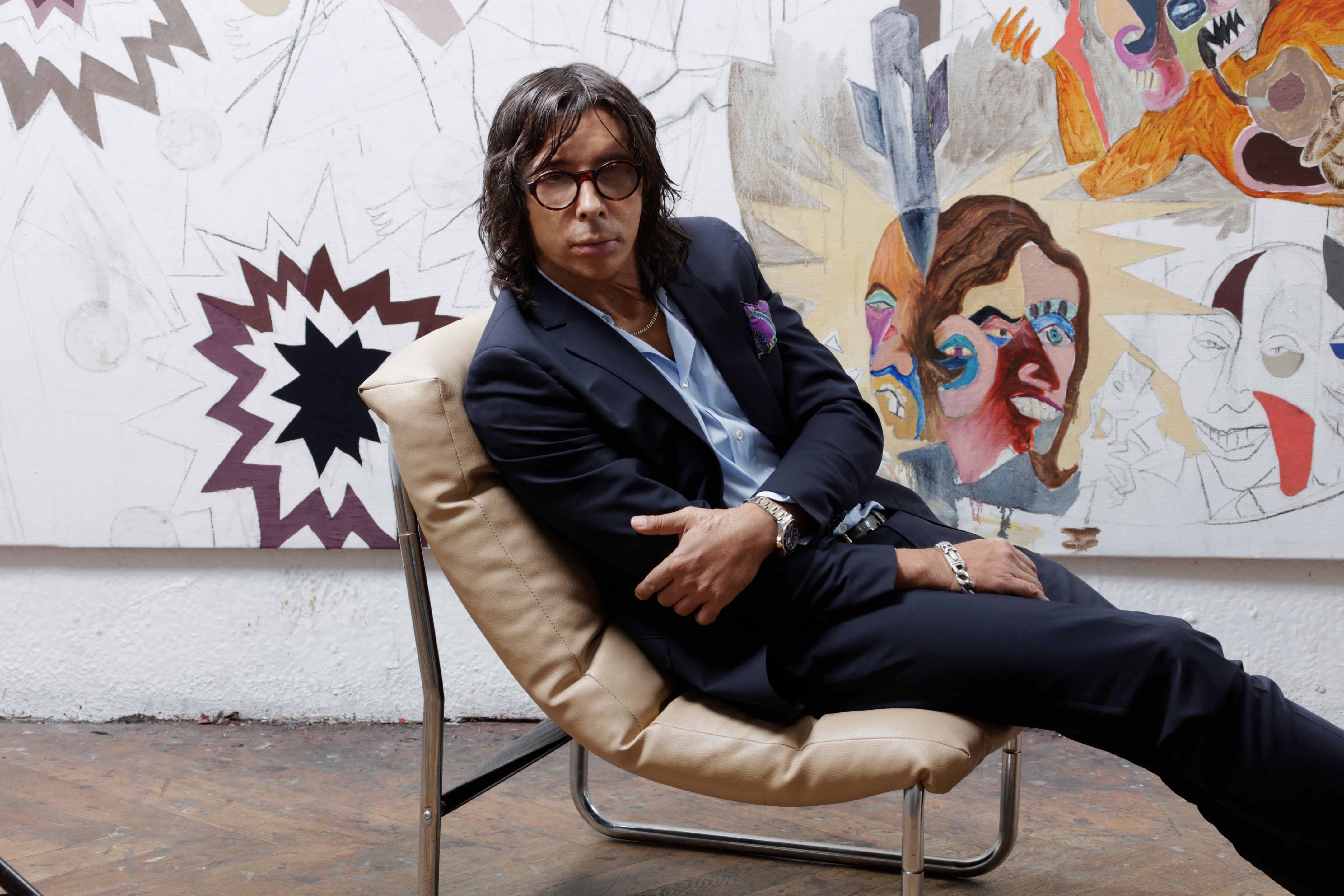 We caught up with German artist Armin Boehm in his studio in Berlin and asked a few questions.

1.How did you begin painting? Was there a moment (after visiting a gallery or museum) when you were first made aware of Art?

I started drawing comics when I was very young. These Comics were often about my view on special persons or on Society in general. Of course, they were very naive and playful at that time. I remember that I was fascinated by books on Hieronymus Bosch. After learning some tough lessons from life – I hurt myself very seriously after building a bomb with a gang of friends and had to stay in the hospital after an explosion for three years – when I was around 19 years old I slowly recovered and developed a strong interest in painting. Due to the consequences of the accident I was more and more attracted by the surface of paintings which had a more direct impact on my nervous system; I think the handmade surface of a painting is very different to the surface of a photo for example. The painted surface is as vulnerable as our skin and looking at it is reaching our emotional system very directly I think. In the meantime I realized that painting is similar to poetry and is able to deal with the unconsciousness and emotions of the human being. I had the idea to come closer to the human “reality” which is mostly based on emotions and unconsciousness. Painting became my favourite medium in these Times.

2.Do you have a style or movement, contemporary or historic that resonates with your paintings? Critics have often seen a parallel in your work and German Expressionism, do you consciously cultivate this movement?

I see a lot of parallels between the time between the wars in the beginning of the twentieth century and our very confusing political and social situation in Europe and the Western world in general. Honestly I never liked expressionistic painting but after reading a lot about the literal movement of the expressionists in Germany I realised, that this generation has had a lot in common with my generation regarding the technical and social Innovations which changed the life of people in their and our times. They had the train and the mobility Innovations, we had the computer, biotech or cybernetic innovations. Both Innovations were revolutionary and had a strong impact on the human psyche . After the Nazi Terror the ideas of this artist generation was nearly whiped out in Germany. There was a little attempt to reanimate this ideas in the eighties but it was more some kind of a selling Label called Neo expressionism. I think there is still a strong potential in the more intellectual and pschological ideas of the Expressionists especially when you focus on the inner emotional and social life in our complex times. The time we are living in is so intense that I never had the idea to focus my interest just on beautiful abstraction. Painting history is like science, as a scientist you need the innovations of scientists generations before which belong to your field of interest, you add something of your life and your ideas to the immense history of painting. But you never know if you’re failing or not, further generation will decide whether there is quality or not. It has always been like this.

3.What is your ideal studio environment?

I like to work in the middle of an urban landscape in a Loft like studio. Even though I don’t like urban life a lot and it is difficult to find rest and sleep in a big city like Berlin it is inspiring to me. I prefer to hang around with my Studio assistant who is like a friend or brother to me. We often have Studio visits from my gallerists from Berlin, Los Angeles, Zurich and Milan and friends who come by for lunch or just want to hang around in the studio. I often listen to a certain kind of music for the period of preparing an exhibition, I have tons of cd´s and playlists in the studio. After becoming a Golf addict three years ago I installed a little driving range in my studio for improving golf shots. It´s sometimes very helpful to get your head free when you don´t find the right way in a certain painting.

4.If you had to choose e one medium to work with for the rest of your career, what would it be?

I never had a doubt in painting and it’s endless possibilities. And as you can see in my previous work, I am developing and changing constantly within the medium itself. I am working with different textiles, subjects or fabric collages in my works and i always try to improve the way of using the colors. ten years ago I was using lots of black, today my palette is dominated by light pastel colors. In between it was very colorful though.

5.Could you explain how you begin a work, and what expectations, if any, you have for a finished piece?

I have two thoughts when I start painting. I need an atmospheric idea of composition and colors and i also need a vague idea if there is some kind of a story that I want to tell myself to entertain me during the long and intense painting Process. I am always seeking for the maximum of intensity in beauty, cruelty or complexity in every painting I’m doing. Mostly I start drawing directly on the canvas without many sketches, but sometimes I do little sketches on my iPad, it depends. When the painting is in progress it develops it´s own dynamic and sometimes I have to change the composition or even the size of the canvas to make it work. I mostly need a deadline to finish a painting. When the shipper is ringing I definitely know; the work is done. I need a certain level of adrenaline for doing a good piece of art. 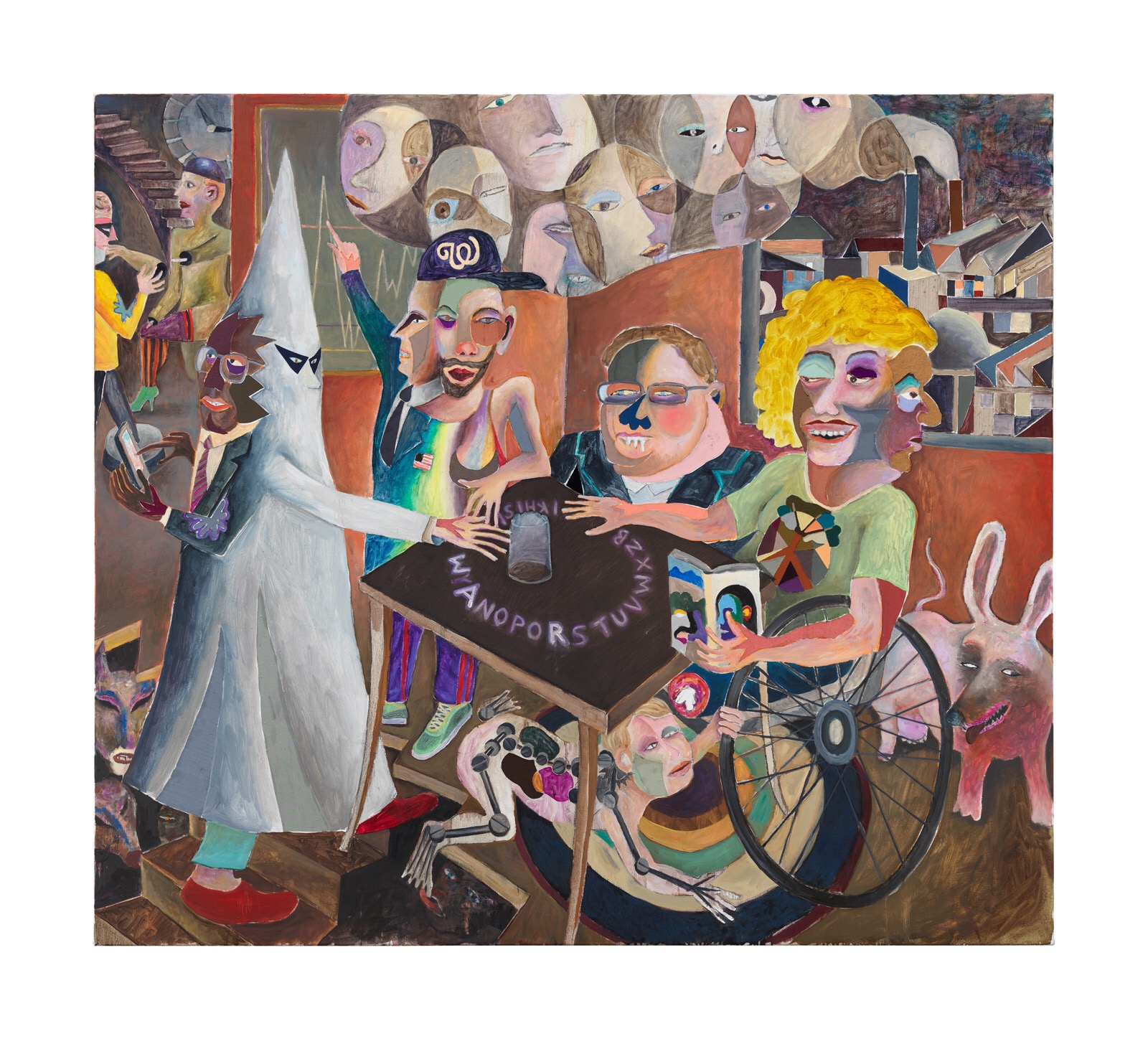 6.You use a lot of purple in your latest series, what effect are you trying to convey? What meaning does it give?

I rarely use colors like blue yellow and Red. I like the bright colors in the spectrum between these primary colors. Purple contains the deepness of blue and the intensity of red for example. It would be pure speculation if I could give you a reasonable answer. I only know that purple is rarely occurring in nature like in some flowers like Orchid, lavender or lilies. It also appears in sliced and dead meat or maybe in a battered face. There is a big range of meanings and associations for me with that Color. It´s the color of nervous tension but it´s a charming, seductive color too.

7.Where do you think the note of anxiety purveying your work stems?

During my studies I read a lot about Nietzsche, Oscar Wilde, Joris-Karl Huysmans, Charles Baudelaire, Gottfried Benn and Nick Cave. I felt very familiar with the tragic idea in western art. Real beauty is often connected with tragedy and we all know that beauty must die in the end. Our recent world is dominated by unreflected positivity. Remember all that “liking culture” in Social Media. I am deeply convinced that without some kind of negativity there’s no antagonism to positivity and our mental evolution will stuck I feel a strong need to deal with anxiety in my paintings because this world of “positivity” is scary to me and I could not survive without creating some kind of resistance with my paintings.

8.What was most impressive about your mentors Konrad Klapheck and Joerg Immendorff? How did they leave a mark on you and your work?

Both of them said only two things I deeply remember; Klapheck told me the art world is like the fashion World, the fashion is changing every year, so don’t care about it and stay on your own track. Jörg Immendorff was an interesting person because he strongly polarized in Society and he cultivated a very bohemian and alternative lifestyle. I was looking for different and alternative ways in Life too when I wanted to become an artist. I understand art as a way out of society, art emerges at the margins of society. Through the speculative thinking in the art business, the art becomes increasingly a bourgeois product. I wanted to escape from the Bourgeois world so i decided for two very different role models with choosing these teachers.

9.What brought you to Berlin?

After 4 years of studying in Dusseldorf I knew every club and every pub, Berlin had many opportunities and cheap Studios in 2001 so it was an easy decision to move here.

10. Have you noticed any change in the Berlin art scene with the current European politics (i.e. Brexit)? Do you see the effect of politics in contemporary art? As an artists are you aware of politics?

Since two years I am more and more interested in political issues in my paintings. I never did like this before and I never liked political paintings. But I said before, the time we are living in is scary to me not only regarding the brexit. This example is just the tip of the iceberg. To me it’s more about a communication Breakdown between the people in the Western civilization. I don’t want to belong to the right or the wrong side of a certain political movement, i want to describe reality with the possibilities of painting. The art scene in Berlin for example is a political monoculture, everybody wants to pretend to be on the right side. It’s more about vanity not about politics, cause politics means to discuss and argue with each other. That’s why I’m very pessimistic in a peaceful future. There is too much hate and prejustice.

11. Where do you see your work progressing next?

I am more and more interested in blank spaces and calm compositions to explore and develop more psychological issues in my paintings.

You can find are info on Armin here: www.meyer-riegger.de 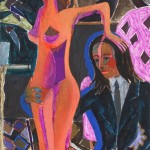