Judy Chicago on the Beatles: 'They represent things we have lost – hope and freedom' - FAD Magazine
Skip to content 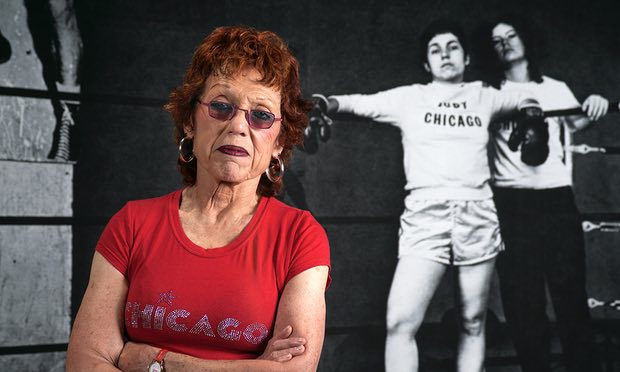 This article titled “Judy Chicago on the Beatles: ‘They represent things we have lost – hope and freedom'” was written by Chris Campion, for The Guardian on Thursday 25th May 2017 05.00 UTC

When American artist Judy Chicago accepted an invitation earlier this year from the Tate to paint a large-scale public mural as part of Liverpool’s Sgt Pepper at 50 celebration of the Beatles’ most popular album, she was amused to hear of an exchange between two of the curators involved in the project. One of them said, “What is Judy going to do? Paint a giant vagina?” The other replied, “I hope so.”

It wouldn’t have been out of character. Known as a pioneer of radical feminist art, Chicago’s signature image is of heavily stylised female sexual organs painted in vivid, almost psychedelic, swirling hues – like an op art Georgia O’Keeffe. She created these works by spray-painting canvas or hand-painting china plates; as she did for the place settings in The Dinner Party, her most famous and celebrated work. A large-scale installation that took five years, it sought to illuminate the contributions of 39 women who shaped world history and culture, from the goddesses Ishtar and Kali to Virginia Woolf and Susan B Anthony.

While her work is unquestionably single-minded and serious, in person Chicago is a riot; a small, tightly wired ball of energy, ideas and enthusiasm who laughs loud and often. With her puce hair, blue-tinted glasses and baby pink fleece hoodie, she personifies the vibrant colour palette of her art. Of all the participants in the Sgt Pepper at 50 project – which consists of 13 original commissions (one for each song on the album) and includes new work by Jeremy Deller, choreographer Mark Morris and a fireworks display by French pyrotechnics company, Groupe F – Chicago is perhaps the unlikeliest.

And that, according to Kasia Redzisz, senior curator at Tate Liverpool, was precisely the point. Chicago, says Redzisz, is “an artist who, in quite a subtle and sophisticated way, undermines what was happening back then”, as well as providing “a very strong female response to celebrate four male artists”. And the Beatles weren’t exactly feminists. Although, as Chicago points out, “John was radicalised by Yoko”; albeit resulting in the ham-fisted (if not outright offensive ) 1972 feminist protest song Woman is the Nigger of the World.

The Sgt Pepper song Chicago was assigned – Fixing a Hole – is an odd fish. So slight and inconsequential that fans and critics have worked overtime to fill it with meaning. It has been variously interpreted as a song about heroin, or about its writer Paul McCartney’s labours to fix the roof of the Scottish farmhouse on the 183-acre farm he had bought in the summer of 1966 as a tax write-off. McCartney told Beat historian Barry Miles, however, that the song was “about all those pissy people who told you, ‘Don’t daydream, don’t do this, don’t do that.’ It seemed to me that that was all wrong and that it was now time to fix all of that.”

And this is how Chicago connected with the song. She sees it as “about being discounted and wanting to give a voice – ‘fixing a hole’ of who counted”. That is what Chicago has been doing almost her entire career as an artist, says Redzisz: “Fixing the hole in art history with her works, to include women artists in art history.”

Given a choice of three possible locations, Chicago chose a large phallic building with a slit down the middle — the derelict White Tomkins and Courage Grain Silo, built in 1913 on the Stanley Dock, beside the Mersey. “So that solved my problem about the ‘hole’, right?” she laughs. She designed a mural that combined geometric shapes with four stylised silhouettes of the Beatles in their mop-top prime. She has been watching anxiously on a webcam from her home 4,800 miles away as Gary Jones, the Liverpool painter tasked with realising her design, scurries up and down a giant scaffold. When complete, the mural will be 60 feet by 40.

Chicago and her husband of 22 years, photographer Donald Woodman, live in the small New Mexico town of Belen, 30 minutes south of Albuquerque. Their home is a red-brick 1920s hotel that once served as a boarding house for railroad workers. The ground floor is split between their studios, while their living space is on the upper floor. Much of the wall space is given over to watercolours and porcelain statuettes of their six cats. The remote town offers her space and “a kind of psychic privacy”. All the more necessary since, after spending 50 years as the consummate outsider and “femme terrible” of the contemporary art world, Chicago suddenly finds herself feted as an elder stateswoman. Transparent creator Jill Soloway is currently developing a television series for Amazon around Womanhouse, the 1972 women-only art installation Chicago curated with artist Miriam Schapiro.

Related: Beatlemania in 1964: ‘This has gotten entirely out of control’

For most of her career, Chicago’s work has been self-generated. But now she’s getting commissions such as this one. One of the reasons Redzisz approached her, says the curator, is because, at 78, she is of the same generation as John, Paul, George and Ringo. But the Beatlemania surrounding the bands’ 1964 arrival in the US and their TV debut on the Ed Sullivan Show all but passed her by because, at the time, she didn’t own a TV. In any case, she deadpans, “I’m not the groupie type”.

Chicago hinted at her own taste in music with 1965 minimalist installation piece, Rainbow Pickett, titled after Wilson Pickett, but understands the significance of Sgt Pepper in that radical flowering of youthful invention that changed the culture forever. Not least, the way in which Peter Blake’s artful and iconic cover collage marked a merging of the music and art world.

She had been part of the group surrounding LA’s Ferus Gallery that included Ed Ruscha, Bob Irwin, John Altoon, Billy Al Bengston, and Larry Bell — himself featured on the Sgt Pepper cover, tucked between John Lennon and Ringo Starr, in an image cut out from a 1964 photo by his friend, Dennis Hopper. Chicago, still going by her married name, Gerowitz, was accepted as one of the lads, if not their equal. She even looked androgynous, with boyish short hair, and dressed in beatnik roll-neck sweaters and jeans.

Her art too had been de-sexed – from the early biomorphic sculptures and paintings that resembled reproductive organs into geometric forms. “I had stripped my work of as many gender associations as I could, having discovered that if my gender showed in my art it would disqualify me from being taken seriously.” But she soon started “getting really restive with what I call ‘male drag’,” she says. “Trying to paint and act like I was a guy.”

In her memoir, Chicago writes that she “shuddered with terror” on reading the Scum Manifesto, recognising aspects of her ow rage at her continuing struggle to be recognised as an artist. In 1969, she joined the faculty at Cal State Fresno and founded the first ever Feminist Art Program. One of her students told Chicago’s biographer, Gail Levin, she was “like Che Guevara”. In 1970, she renounced her married name and adopted the nom-de-plume Judy Chicago, after her place of birth. She took out a full page ad in Art Forum parodying the macho posturing of her male peers: Chicago as a street-tough in a boxing ring ready to take on all-comers.

Chicago’s anger pulsed from a series of unsparing photographic images that she turned into litho prints: Red Flag – a close-up of a bloodied tampon being pulled from between her legs that Chicago claims as “the first image of menstruation in western art”; Gunsmoke, a portrait of the artist, head snapped back from the force of a gun lodged deep in her mouth; and Love Story, in which a pistol is pointed menacingly towards a woman’s nude behind.

Newly liberated from creating genderless art, she sought to establish a language for her work that merged her “in your face” content with her love of craft – and came up with the psychedelic vaginas of her Through the Flower series. After that, the projects became more complex and collaborative, revealing hidden and neglected stories of women in works such as The Dinner Party and the Birth Project, with its needlework images of childbirth. When Redzisz contacted her, she was just completing The End: a Meditation on Death and Extinction (which is to be unveiled in 2019 at the National Museum of Women in the Arts in Washington DC).

If she once spearheaded a revolution, Chicago now sees the struggle for change as something that takes place in waves, ebbing and flowing across generations. “I’m not a conspiracy theorist,” she says. “However, I do feel like there’s a pushing forward and then a push back. And that’s the story of the human race. For me, that’s all the Donald Trump win is – a push back for the white guys.”

So Chicago’s mural celebrating the Beatles feels timely. “They have come to represent something that has been lost. Their music embodies hope and change and freedom.” And one more thing, she adds: “They had really authentic voices.” Just like the psychedelic visionary of feminist art herself. 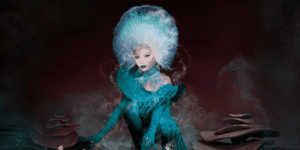