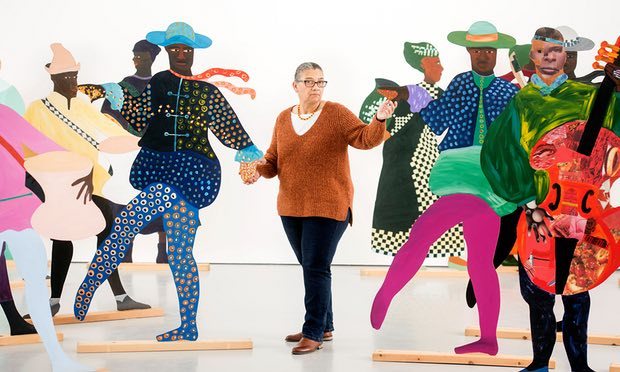 This article titled “Turner prize 2017: a cosmopolitan rebuff to Brexit provincialism” was written by Adrian Searle, for The Guardian on Wednesday 3rd May 2017 15.13 UTC

The 2017 Turner prize shortlist is unexpected and refreshing, not least because of the welcome relaxation of the rule that previously disbarred artists over 50 – a rule designed, I believe, to prevent older artists dominating through seniority alone.

The rule perhaps created a period in art when youth itself had glamour and cachet; the hot, the sexy, and the new were privileged. But novelty, always problematic, is not the same as newness – new ways of saying and doing things are often arrived at over years, if not decades. Some artists do their best work early. Others don’t. The belated recognition of artists such as Phyllida Barlow and, in this year’s Turner prize shortlist, Lubaina Himid and Hurvin Anderson, recognises this fact. Without this rule change, Himid, now in her early 60s, and Anderson, 52, would be ineligible. Charlotte Prodger, Ed Atkins and Heather Phillipson were on my fantasy list for this year’s prize, but their time will come.

A second rule change means that the prize is awarded not only for the exhibitions the artists have been nominated for, but also for the prize show itself. It always has been. Judges inevitably include the show itself in their deliberations (I was on the jury in 2004); you bring what you know to the table and artists sometimes fall flat or overextend themselves.

Related: Turner prize: artists over 50 will now be eligible for prestigious award

I can’t think of an artist who hasn’t wanted to make the best Turner prize show possible, and many create new work especially to make an impact, not least with the media. Martin Creed’s lights going on and off won him the Turner, but Tracey Emin’s My Bed, though an attention-grabbing gambit, did not beat Steve McQueen. Without a crucial, possibly game-changing shortlist show, and the discussion it provokes, the Turner prize isn’t interesting.

Are these the right artists for 2017? The shortlist recognises three women, two painters, two over-50s. All have origins or parentage from outside the UK. German artist Andrea Büttner divides her time between London and Stuttgart. Birmingham-born African-Caribbean painter Hurvin Anderson is nominated for a recent show in Toronto; Büttner for exhibitions in LA and Switzerland. Long may this openness continue post-Brexit, when, I predict, art education will go into an even steeper decline, and the current internationalism of the British art world, and cultural life in general, will slide into a marginal provincialism.

With her cut-out tableaux of funny, engaging figures, the liveliness of her line and her social commentaries, Himid has made two exceptionally popular UK shows in recent months, as well as in a major exhibition of radical black art from the 1980s at Nottingham Contemporary. She would be a popular and worthwhile winner.

Anderson meanwhile was taught in the 1990s by Peter Doig. The influence shows, but the two have become friends, and influence is a two-way street. Painterly but reserved, Anderson’s work is a synthesis of ideas and atmospheres, figurative and abstract modes.

Related: President with a torpedo in his crotch: how the works of Lubaina Himid speak to Trump times

Büttner and Rosalind Nashashibi make work that is less immediately accessible or tractable for Turner prize audiences. Since the 1990s Nashashibi’s films have captured the everyday – a jumble sale, New York cops hanging around the precinct house, life in Gaza, gay cruising on Hampstead Heath, the recreation of a street scene described in a Pier Paulo Pasolini novel – weaving the material into complex, fragmentary visual narratives that take a lot of unpacking. Büttner’s woodcuts, films and sculptural arrangements are equally filled with references and themes that encompass faith and purity, poverty and shame. But I am almost certain Himid will win. Already the bookies’ favourite, I much prefer her groups of cut-out figures to her paintings – but it all hangs on the show.