REVIEW: Picasso: Minotaurs and Matadors – sex and death in the bullring - FAD Magazine
Skip to content 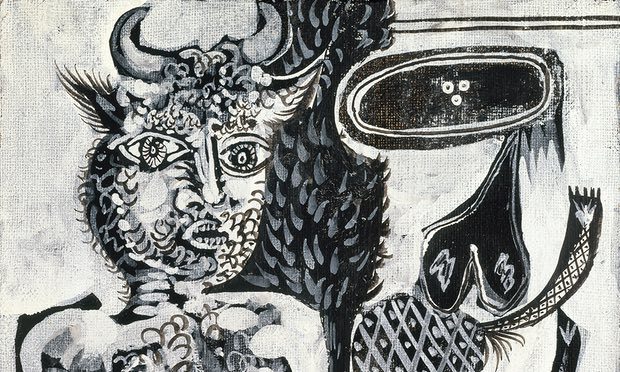 This article titled “Picasso: Minotaurs and Matadors review – sex and death in the bullring” was written by Adrian Searle, for theguardian.com on Friday 28th April 2017 09.56 UTC

Picasso, stripped to the waist, wearing a wickerwork head of a bull made for the training of matadors. Here he is again, hiding behind a real bull’s skull. And once more, Picasso photographed among glamorous women, Jean Cocteau at his side, at a bullfight in Arles. Photographs and short film clips – at a corrida in 1955, the artist painting a bull of glass for the camera in 1949, his son Paul dressed as a matador in 1929 – punctuate an exhibition in which Picasso the artist and the man, the matador, the bull and the minotaur are interchangeable presences.

There are bulls everywhere in the sixth Picasso exhibition Sir John Richardson has curated for Gagosian Gallery. With Richardson’s clout and Larry Gagosian’s money, the gallery can mount exhibitions and get loans that public institutions, sluggish and cash-strapped, often can’t.

Filled with loans from museums and private collections, and many works I have never seen before, Minotaurs and Matadors is displayed in surroundings that are as theatrical as they are elegant. Architects Caruso St John have given Gagosian’s Grosvenor Hill gallery the feel of the modernist 1950s, with floor-to-ceiling pleated green curtains dividing the space and plywood trestles for sculptures and ceramics but Picasso more than survives this puzzling exhibition design.

Picasso died in 1973, aged 91. Now 93, Richardson is still at work on the fourth volume of his magisterial biography of the artist, nervous that every newly discovered tranche of letters or release of documents will force him to make further revisions to what already seems an endless task. As well as the richness and complexity of his art, Picasso led an equally complex life, and Richardson’s decades of commentaries and analysis has been an attempt to read the art through the artist’s life. He also knows not to engage in the hyperbole indulged in by so many of Picasso’s hagiographers, intent on reminding us of Picasso’s protean talents, his elemental, Spanish machismo.

An exhibition focussing on Picasso’s bulls, mythical beasts and bullfighters unavoidably makes us think about masculinity and the kind of man he was. Men who are too macho are usually not mucho, said Zsa Zsa Gabor. But Picasso was too mucho in so many ways. Clowning with a mask, depicting himself as minotaur, painting (towards the end of his life) his randy, slovenly old matadors indicates he knew it too. He also said, in 1960: “If all the ways I have been along were marked on a map and joined up with a line, it might represent a minotaur.”

Richardson tells the story, when Picasso was 14, of the death of his younger sister, Conchita, aged seven, after contracting diphtheria. Awaiting the arrival of serum from Paris as she lay dying, Picasso vowed to God that if she were spared, he would never paint again. Picasso only ever told the women in his life this story, though Conchita appears again and again in his art, especially in the Minotauromachie, his great suite of prints of 1935. Sometimes she is given the face of his mistress, Marie-Thérèse Walter. Further references to a blind art dealer and to the fourth-century martyr St Lucy (patron saint of the blind) coexist, along with intimations of the Spanish civil war, the Cretan Minotaur, and bullfights. Conchita holds up a torch, as though to light the way. He never stopped painting and he never saved her.

Beginning with a tiny work from 1889, when Picasso was eight years old, and ending with the furious and absurd matadors and toreros he painted in 1970 (harking back to Goya, and to the less likely influence of the musketeer and buccaneer adventures he liked to watch on TV), the exhibition covers much of the artist’s career, though its core focuses on works produced during the 1930s and 40s; troubled times, both personally and politically. Earlier this month, on the occasion of the 80th anniversary of the painting of Guernica, the Reina Sofía museum in Madrid, where the painting is held, mounted the exhibition Pity and Terror: Picasso’s Path to Guernica. The Madrid exhibition undoubtedly casts a shadow over Minotaurs and Matadors, where bulls and screaming horses appear time and again.

Here we have Picasso at his most coded, his most playful and personal. In a terse little outline drawing from 1902-3 he shows us a man about to slit a bull’s throat in an abattoir. A tiny clay faun from 1957 has a cock so erect you think he might fall over. A simple ovoid head of another faun is so plain it is difficult to know why it has so much life and character. If you look closely, it is also a small essay on the problem of how to sculpt eyes (and, of course, it being Picasso, he gives us both the problem and solution).

All beards and hairy chests and balls, his men flounder in their bodies. Shot through with an arrow and beached, one figure is looked on by a group of women in a boat. Are they trying to save him or savouring his distress? The orange head of a minotaur on a stick, like a trophy, calm but sad, sits beside a book, brushes and palette: a still life of death, or at least of impotence. A bull’s head grins boggle-eyed on a plate, its expression, disconcertingly, something like a Wallace and Gromit rictus grin.

Here, spotlit and hung high on a wall, is Picasso’s 1942 head of a bull, made from a bicycle seat with handlebars for horns, a distant response to Duchamp’s readymades. Other painted and sculpted bull’s heads are devilish satyrs and fauns, humanised (Picasso’s own visage always seems to loom behind them, imprisoned behind the mask. Hirsute sex gods, they often look, if not lonely, then at a loss.

One terrific suite of lithographs, Le Toreau, takes the form of a bull from muscular realism through progressive abstractions and reductions; mass and bulk become pure line through 11 states, Picasso’s curves and arcs slicing the body like a butcher’s poster of prime cuts, the creature’s pizzle and huge balls progressively reduced, at last, to tiny appendages. Another bull is a bulking, lumpen thing of clay, while another drawing has numerous small bulls looking like nothing so much as a flock of pigeons pecking at our feet.

Shuttling back and forth between caricature and naturalism, classicism and stark abstraction, Picasso drew and painted and sculpted, collaged and modelled and carved at form and meaning. Everything has its own character – florid, terse, stark. Messy and clotted, sloppy and reserved. Picasso was his own monster, both minotaur and labyrinth. It is hard not to get lost in him, nor to be devoured.