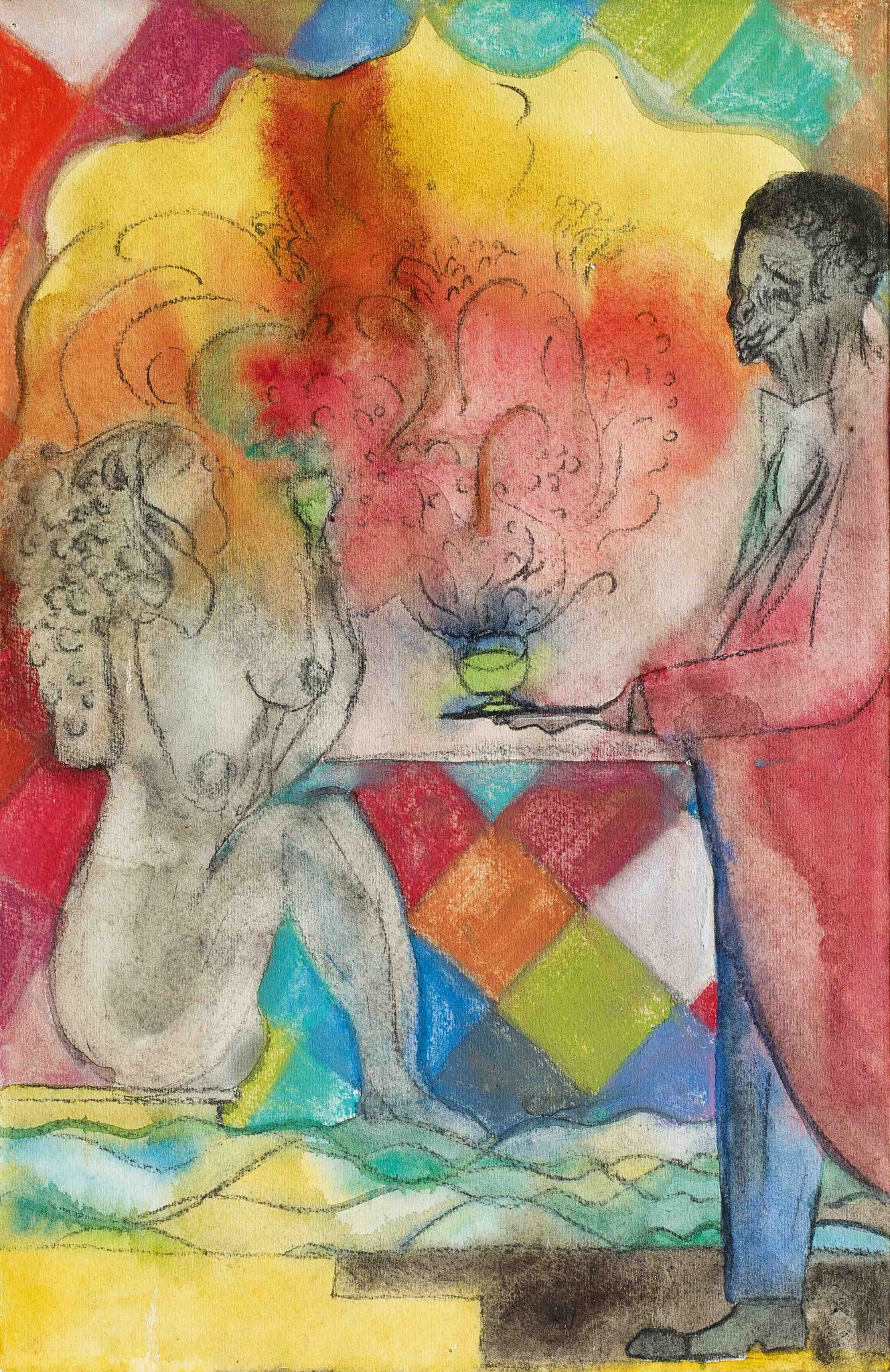 The first exhibition at Victoria Miro Venice will be by Chris Ofili. Entitled Poolside Magic the exhibition comprises a suite of pastel, charcoal and watercolour works on paper, which are being shown together for the first time. Poolside Magic, in which a man in coat-tails serves a naked woman beside a swimming pool, riffs on themes of sexuality, mutability, magic and the occult, making reference to the vibrant and sensuous landscape and culture of Trinidad, where the artist lives and works. Source material for the series includes a photograph of Trinidadian artist Boscoe Holder (1921 – 2007) at work in his Port of Spain studio. Opening during the Vernissage for the 57th Venice Biennale, the exhibition marks a return to the city for the artist. Ofili represented Britain at the 50th Venice Biennale in 2003, when he presented his ambitious exhibition Within Reach, and in 2015 a suite of Ofili’s paintings were included in All The World’s Futures, the 56th International Art Exhibition of the Venice Biennale, curated by Okwui Enwezor. Chris Ofili’s exhibition Weaving Magic is at the National Gallery, London from 26 April to 28 August 2017.

Victoria Miro’s new gallery will open to the public on 10 May 2017. This will be the gallery’s fourth exhibition space, joining gallery sites in Mayfair and Wharf Road, London. The new gallery will provide further opportunities for artists to stage exhibitions and special projects in an intimate environment in the heart of Venice, a city so beloved by artists.

The gallery will be housed in the former Galleria il Capricorno in the San Marco district of the city. First opened in 1971 by gallerist Bruna Aickelin, Galleria il Capricorno is renowned for showing key twentieth-century artists such as Lucio Fontana, Piero Manzoni, Cy Twombly and Robert Rauschenberg and, later, international contemporary artists, while attracting legendary figures such as Peggy Guggenheim to its quintessentially Venetian canalside location. Victoria Miro’s friendship with Aickelin is longstanding and, since the late 1990s, il Capricorno has staged solo exhibitions by gallery artists including Hernan Bas, Verne Dawson, NS Harsha, Chantal Joffe, Wangechi Mutu and Grayson Perry. Housed in a seventeenth-century building, in the heart of the San Marco district, the gallery has street and canal frontage.

Speaking about the new gallery, Victoria Miro said: “For some time now, Bruna and I have been talking about the legacy of Galleria il Capricorno, which has championed the very best contemporary art over the past five decades. We have worked together over many years, and I have long admired her strong and simple approach to presenting works in this small jewel box of a gallery in the heart of Venice. I am immensely grateful to her for entrusting us with this unique and beautiful gallery and look forward to extending the opportunity to our artists to respond to and show in this inspirational setting.”

“Peggy Guggenheim, Ileana Sonnabend, Paula Cooper, Barbara Gladstone, Lisa Spellman, Sadie Coles and Victoria Miro are some of the pioneering women gallerists whom I have had the great fortune to know and work with over many years. Our lives are forever woven together, and I feel privileged to hand over the baton of my gallery to Victoria.”

About The Artist
Chris Ofili was born in Manchester, England, in 1968, and currently lives and works in Trinidad. Solo exhibitions of his work have been presented internationally, including at the New Museum, New York (2014), travelling to Aspen Art Museum (2015); The Arts Club of Chicago (2010); Tate Britain, London (2010 and 2005); Kestnergesellschaft, Hannover (2006), The Studio Museum in Harlem, New York (2005), and Serpentine Gallery, London (1998). He represented Britain at the 50th Venice Biennale in 2003 and won the Turner Prize in 1998. Ofili received a CBE in the New Year’s Honours list in 2017. Chris Ofili: Weaving Magic is at the National Gallery, London, from 26 April to 28 August 2017.