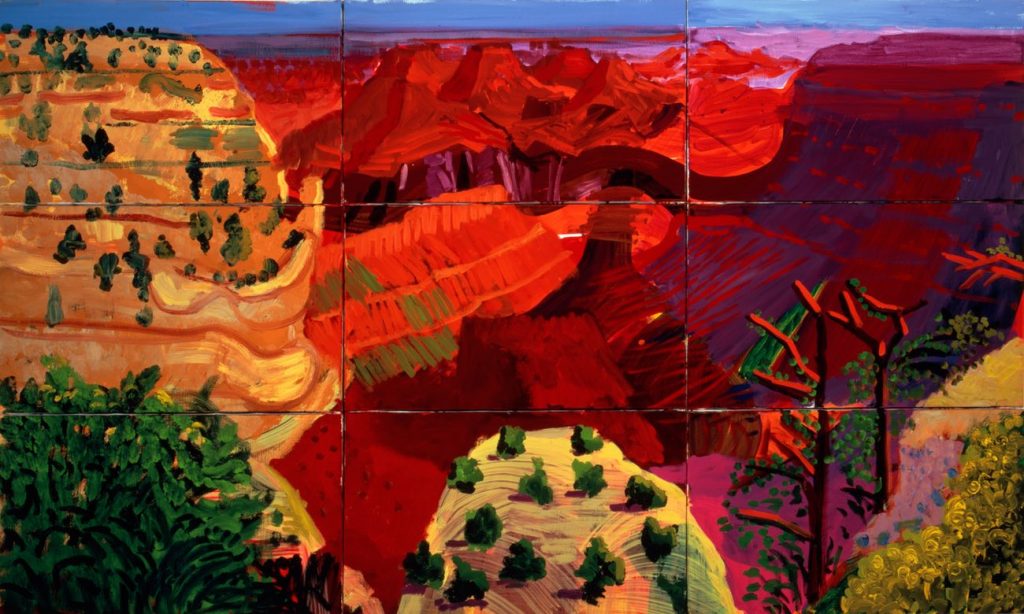 The morning I visited the Tate’s comprehensive David Hockney retrospective, TV crews from around the world were flitting importantly from room to room, presenters offering shorthand pieces to camera in front of A Bigger Splash or Mr and Mrs Clark and Percy. One American critic was essaying so many takes of her opening line that it came to sound like a looped commentary: “David Hockney was born in dreary, grey, rainy northern England, and as soon as he could he migrated to California, drawn by its sunshine and vibrant colours…”

It’s one way of looking at the opening rooms of this show but it doesn’t tell the whole story. The great California swimming pool paintings with which Hockney made his name still bring a smile to your eye, but their familiar cool geometries are given a sharper focus when set against the two less sure-footed rooms that precede them.

The paintings Hockney produced at the Royal College of Art, intense semi-abstract canvases, make a pent-up prelude to the aquamarine pleasures that followed. In 1960 and 1961, when homosexuality was still criminalised in Britain, the painter, then in his early 20s, was devoting most of his artistic energy to the risky business of coming out. In style, his canvases borrow some of the language of the 1950s British avant garde, in particular Alan Davie’s efforts to paint the unconscious, but Hockney determinedly queered this particular pitch. There are paintings decorated with the crude graffiti of toilet walls: “fist”, “69” and “ring me anytime at home” (1961’s version of “my phone’s on vibrate for you”), together with allusions to Walt Whitman’s all-inclusive love poetry – the low and the high of intimacy.

Some of the fantasy seems unspoken; phallic shapes loom out of his distressed surfaces unresolved. Some is stated more literally. There is a kind of furtive desperation in the stick man embrace of We Two Boys Together Clinging (which the catalogue suggests as a homage to the painter’s crush on Cliff Richard – who knew?). This painting, among others, is carefully etched with the sort of confessional doggerel with which Tracey Emin made her fortune: “elbows stretching, fingers clutching, Arm’d and fearless eating drinking sleeping loving”. The tenderness of it is juxtaposed with the pop art joke of Cleaning Teeth, Early Evening (10pm), in which embryonic figures with tubes of Colgate for pricks intertwine on a chained bed above an outsize pot of trademarked Vaseline.

The complicated display of these pictures – one is called simply Shame – was never, you guess, going to be honest enough for the defiant exhibitionist in Hockney, who was at the same time taking to the revue stage at the Royal College to sing “I’m just a girl who can’t say no” in miner’s boots and a tutu. California gave him a way to get rid of all that complication. In his early American pictures – Arizona 1964, say – you can see him feeling the adventurous possibility of the open road. When he subsequently makes the leap from the unresolved interior life of the earlier paintings to the poolside paradise, it looks like a triumphantly political act as well as a personal liberation.

By 1967, he was done with scrawled allusion. He wanted the subjects of his lust in easy sunlight. The limitations of abstraction are satirised in these pictures. A Bigger Splash could be an American Mondrian, if one of Hockney’s golden lads hadn’t dived into the frame to create a riot of water.

Hockney famously commented how the city of angels had not been documented in paint: “My God! This place needs its Piranesi… so here I am.” There is a prelapsarian quality to some of these pictures, but all good Edens come to an end. By the time of Portrait of an Artist (Pool with Two Figures) in 1972, in which a static and disconnected figure peers into a pool at a submerged swimmer, Hockney appears to be dramatising the distance between subject and object.

In some senses the subsequent 40 years of Hockney’s career look like a series of heroic attempts and strategies to manufacture the intensity of his early years; given his passion for tobacco you could argue that they represent the most extended postcoital smoke in art history. He refuses anything like bitterness and anything but the most seasonally comforting visions of mortality. The two versions of Breakfast at Malibu, both from 1989, may show a terrace seemingly adrift in a roiling ocean, but the terrace table is invitingly set for tea.

An abiding fascination with the eye’s habits of constructing the world often takes centre stage in later work, but the humanity of his painting is never far away. The polaroid portraits already look a curiously archaic attempt to capture the moment by moment cubism of looking; still, they remain full of genuine heart. There is a poignant collage of My Mother, Bolton Abbey, Yorkshire, Nov 1982, which brought to mind an anecdote Hockney once told me in an interview, about his mum’s first visit to Beverly Hills. After two or three days out on the patio, she delivered her verdict on his lifestyle: “It’s strange – all this lovely weather and yet you never see any washing out.”

Hockney tries to reconcile those different backdrops to his life by transplanting – always take the weather with you – the lurid colours of the California desertscape to his native Wolds. Looking at the sheer shocking love of pigment in the largest of these canvases, you could make an argument that Hockney had waited all his life for the saturated backlit palette of an iPad, though the dexterous experiments with digital finger painting that are included here are not much more than curiosities. In the past decade or so, after the death of his mother at 99, the human figure all but retreats from his landscapes (save for a couple of recent studies of an old boys’ card night). Instead, in film, and in paint, and in charcoal sketch, he looks for all that might be important in the world outside his window, with enduring spirit and variable success.